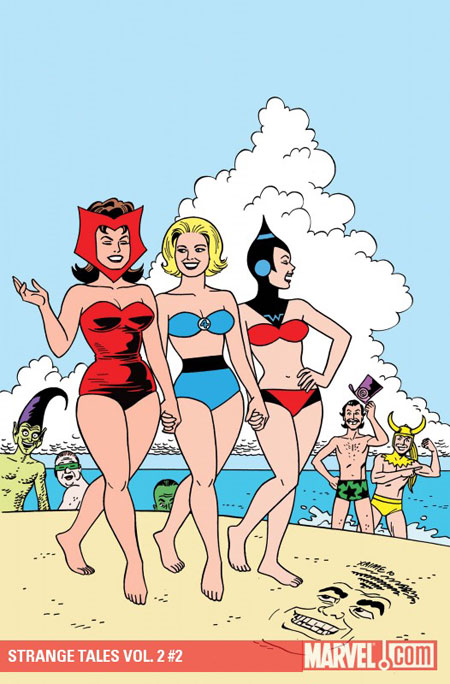 … And by “various” I mean a six-page Gilbert Hernandez Iron Man and Toro vs. the Leader story, followed by a six-page Jaime Hernandez everybody-at-the-beach story (look at that cover!), plus offerings from Jeffrey Brown, Farel Dalrymple, Paul Hornschemeier,  and Tony Millionaire, among others.  Nine stories total (ten, if you count the one-page Watcher intro on the inside front cover), from some of the weirdest and wildest alternative creators out there, with creator biographies so you can follow up on the stuff you like. Not all of it works (Sheldon Vella’s “Look at me: I’m channeling S. Clay Wilson” bit doesn’t come off well when it’s restricted to PG-13 sensibilities), but there’s so much cool stuff here that it doesn’t matter: at $4.99, this is worth every penny. 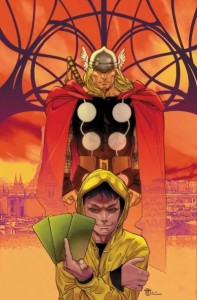 As you may have noticed, there are a ton of Thor books on the stands right now. However, focus on just two: Roger Langridge and Chris Samnee’s all-ages, out-of-continuity and infinitely charming Thor: The Mighty Avenger, and this one: the flagship title, which Marvel have wisely turned over to Matt Fraction. Fraction was able to take over Iron Man a couple of years ago, and distill the best bits from older books and the movie version into an engaging adventure book. He’s doing the same here, aided and abetted by Ferry’s expressive, confident art — and , having figured out how to make the post-Civil-War, sad-sack-despot Tony Stark into a sympathetic and heroic character again, he’s doing the same here with, of all beings, Loki. This is only the second issue of the arc, so climb on board now for what promises to be a clever, fun ride. 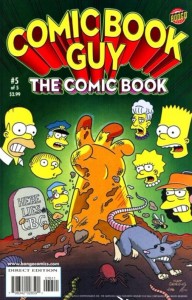 Abe Sapian, Daryl the Wendigo and company against Lovecraftian monstrosities, both large and small, as planned by Mignola, scripted by Arcudi and drawn by Davis: what more do you need to know?

This turned into a worthy mini-series: written and drawn by the usual gang of idiots, with more in-joke pop-cultural references than you can shake a Krustyburger at (although it’s Krusty’s milkshakes that turn out to be critical to the plot), plus evil twins, fanboy revenge, Captain Marvel defibrillators and old horror comic parodies. Is the Pachyderm of Panelology really dead? You’ll have to buy this to find out, but here’s a clue: the last line of the book is “Worst… fake… death… ever!” 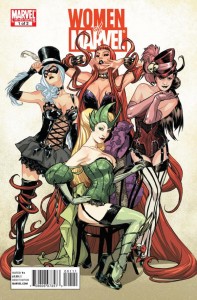 This anthology offers stories of Marvel’s female characters: an eight-page Medusa/Crystal Young Inhumans story, an eleven-page Black Cat/Satana one, and another eight-pager with the Enchantress. The first has a female writer (G. Willow Wilson), but a male artist; the second has a male writer but a female artist (Romina Moranelli, who has an appealing, manga-influenced style that handles action well, and with a light touch), and the third is Y-chromosomes all the way around. If you’re keeping score at home, that’s only two women creators out of six (well, to be fair, Sara Pichelli contributed the cover). That’s not quite bait and switch, but it’s definitely a missed opportunity — especially since only the Black Cat/Satana story is worth more than a quick look.

Still the weirdest mashup in comics: half fashion-magazine parody, and half scholarly musing on comics and illustrational art history, currently exploring, in microscopic and fascinating detail, the relationship and mutual influences between Stan Drake and Alex Raymond, and all of it rendered in Sim’s own careful, chameleon-like pencils and inks. Why? Who knows, but between the pinups and the panel breakdowns, and the scholarship and the supermodels, it’s very hard to resist.

Back in the mid-’90s, Waid and Cap helped each other out — Waid rescued the Captain 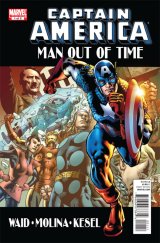 America comic from cancellation, and in return Cap made Mark a fan-favorite writer, and a star. Eventually, they drifted apart (the passage of time, the demon of editorial interference, and the siren call of another love — the FF — were all partly to blame), but now they’re reunited, in this first of (one assumes) many stories gearing up to be future trade paperbacks for next year’s movie fans. This first issue starts out in the ’40s, but by the halfway point there’s Baron Zemo, that rocket, and Bucky and the bomb, and then the latter half of the book gets the Avengers on board, and has Cap arriving in New York City, as the titular man out of time (and, while the Avengers are the canonical Thor, Iron Man Giant-Man and the Wasp, the NYC setting has cell phones and ATMs, so it appears to be today and not 1964). Anyone who’s been a comics fan for more than a year or two has seen this all before, and the ending, especially, is pretty standard stuff (the Avengers kind of mysteriously disappear at the end of the book so Cap can wander the streets of NYC, alone and amazed and, eventually, subject to hero vs. mugger cliche #32: the Hysterical Victim Packing Heat), but it’s all smooth and professional and pretty to look at, too, and should satisfy those theoretical movie fans well enough.

With 40 years of experience in comic reading, collecting and reviewing, English Professor Phil Mateer has an encyclopedic mind for comics. Feel free to ask Phil about storylines, characters, artists or for that matter, any comic book trivia. He will post your questions and answers on the AABC blog. His knowledge is unparalleled! He is also our warehouse manager, so if you are looking for that hard to find comic book, ask Phil!
View all posts by Phil →
This entry was posted in New Comics, Reviews and tagged B.P.R.D., Captain America, Comic Book Guy, Dave Sim, Gilbert Hernandez, Glamourpuss, Guy Davis, Jaime Hernandez, Loki, Mark Waid, Matt Fraction, Mike Mignola, Pasquel Ferry, Simpsons, Strange Tales, Thor. Bookmark the permalink.