It Came From the Back Room #9 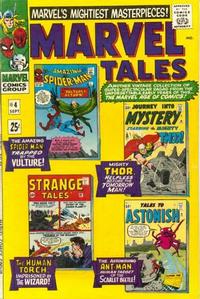 This, of course, is the Spider-Man reprint book, and as such offers a cheap alternative to otherwise-expensive back issues. That sales point is less critical today (in our brave new world of trade paperbacks and Essentials editions and practically every Marvel book from before 1975 in print somehow) than it was back in the ’70s and ’80s, but there’s still a lot of very-high-quality entertainment, and historical content, available through this title. 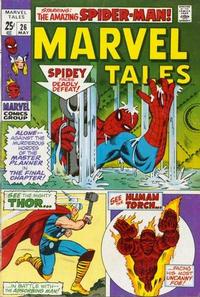 The early issues (up to #33) started out ‘way back in the ’60s, and are themselves collectible now, since they were square-bound, 64-page collections of early Marvel books — not just Lee/Ditko Spider-Man, either; each issue also had an early Thor story, a Human Torch episode from Strange Tales, and an Ant- or Giant-Man one from Tales to Astonish, plus the occasional ’50s Marvel Boy reprint as a substitute. Only a few of these issues were in low-enough grade to end up on the bargain racks, so look fast — although they’re now all restocked out in the regular back-issue boxes, too.

Issues #34 on are regular-sized comics, each reprinting 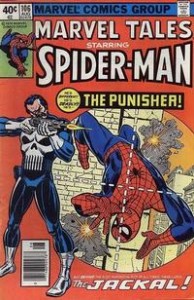 just one Spider-Man story; by that point, they’re into the Romita era, and the reprints continue in order up to issue #136 (the most-sought one of these is #106, because it reprints Amazing Spider-Man #129, the first Punisher). Then, having realized that, in the mid-’80s, readers didn’t care about Spidey stories from the mid-’70s, Marvel snaps back to the original stuff with Marvel Tales #137, which reprints both the Spidey origin from Amazing Fantasy #15 and the origin of Dr. Strange from Strange Tales #115, a veritable symphony of Lee/Ditko coolness. Amazing #1 gets reprinted in Marvel Tales #138, and the early stuff continues from there in order, with the first Annual (the Sinister Six) in Marvel Tales #150, and the second Annual, a team-up with Dr. Strange that’s on my short list of the 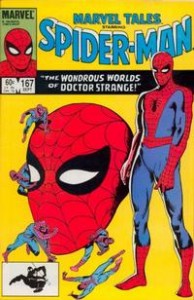 greatest Marvel comics ever (I read it when I was nine years old, and it made me a comics fan for life), in issue #167. The chronological fun continues up until #190, which reprints Amazing #50, and then #191, double-sized,  has the Green Goblin “drug” issues from Amazing #96-98, while #192 has the death of Gwen Stacy issues, in #121 and 122.  Subsequent issues skip around quite a bit, as Marvel editorial start picking classics from the entire universe of Spidey stories, and not just from Amazing — so issues #193-208 cover the Claremont/Byrne Marvel Team-Up run, while #s 209-222 cover early Punisher appearances in various Spidey books, #s 223-225 repeat the death of Captain Stacy, issues #226-248 are X-Men/Spidey team-ups, either individually or as a group, etc. 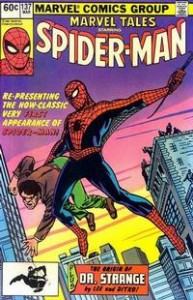 Many of the issues from #34 up — especially from #136 on — are available for a buck each on the discount rack (well, $1.25 for the much later ones, from around #269 through to the end of the run at #291), and at that price ought to be hard to resist; that’s a lot of good stuff for 25 or 30% of what one new book would cost. If nothing else, you can buy them and give them to a nine-year-old of your acquaintance, and turn them into lifelong fans, too….

These are all in the back in boxes labeled “Marvel reprints,” which is why they’re coming up here. Here’s a quick list of what you might find over on those ever-evolving discount racks:

Marvel Adventures: Daredevil reprints, from issues in the early 20s of DD’s own title. 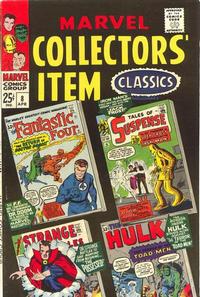 This comic only went six issues, though; the Matt Murdoch nostalgia market apparently wasn’t that big.

Marvel Collector’s Items Classics: more early-’60s superhero goodness, in the 64-page format of early Marvel Tales. The key reprints were of the Fantastic Four, but there were also Hulk, Iron Man and Dr. Strange stories in each issue. The changed to Marvel’s Greatest Comics with #23, and by issue #34 was offering normal-sized FF reprints; this continued through the end of its run, with issue #96. 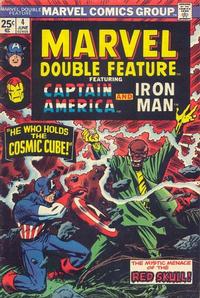 Cube story from Tales of Suspense #81, a tale from 1966 that my then-ten-year-old self thought was almost as cool as the Spidey/Dr. Strange one in Amazing Spider-Man Annual #2. Sigh… anyone who’s ever said anything bad about Jack Kirby should (a) take a look at this issue, and (b) shut the hell up.

Marvel Spectacular: Thor reprints. I have to confess that my ten-year-old self, who was so blown away by the Lee/Kirby Cap, had little love for the Lee/Kirby God of Thunder (I like it better now, though…).

Marvel Super Action: Cap reprints, from after Tales of Suspense morphed into his solo book. 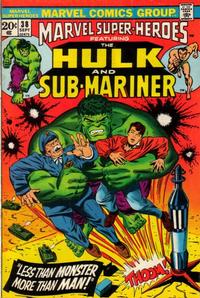 with #21, with squarebound offerings of various early X-Men and Daredevil comics, and after issue #32 offers just Hulk/Sub-Mariner reprints from Tales To Astonish, and then with issue #56 just the Hulk stories from his own book. My pre-adolescent self wasn’t that big on Bruce Banner’s alter ego, either, maybe because even back then all the stories seemed to have the same two or three plots, with often-changing artists and no dependable hand like Ditko or Kirby to steer a steady course.

Marvel Triple Action: This starts out with FF reprints, but quickly switches to the Avengers with issue #5 (reprinting the tenth issue of Marvel’s super-team), and sticks with them from then until the end of the title with #47. These stories I liked, although Don Heck wasn’t my idea of a great artist — if you ask me, the true golden age of Earth’s Mightiest Heroes starts about a year after John Buscema shows up, with the Vision — and Marvel Triple Action doesn’t quite make it that far.

With 40 years of experience in comic reading, collecting and reviewing, English Professor Phil Mateer has an encyclopedic mind for comics. Feel free to ask Phil about storylines, characters, artists or for that matter, any comic book trivia. He will post your questions and answers on the AABC blog. His knowledge is unparalleled! He is also our warehouse manager, so if you are looking for that hard to find comic book, ask Phil!
View all posts by Phil →
This entry was posted in Marvel, Reviews and tagged Avengers, Captain America, Daredevil, Ditko, Don Heck, Dr. Strange, Fantastic Four, Hulk, John Buscema, Kirby, Lee, Marvel Super-Heroes, Marvel Tales, Marvel Triple Action, Punisher, Red Skull, Romita, Spider-man, Tales of Suspense, Tales to Astonish, Thor. Bookmark the permalink.