Not a very big week for comics, sadly, but let’s see what stood out:

Give Marvel credit here: they didn’t take the easy way out with this story, by using Peter and Mary Jane’s missed wedding day as an excuse to say “and then everything was changed.” Instead, they’re trying to establish two Spideyverse points: (1) although there was no marriage, everything with the couple pretty much happened as in “real” continuity otherwise, so all your back issues are still good, as long as you squint a little, and (2) that Mephisto thing? Only a tiny little nudge, the day of the almost-wedding; hardly worth mentioning. Instead, years later bullet-wounded Aunt May gets saved at the last minute by the power of “love” (which, in storytelling terms, is much more uplifting than by the power of “Satan”), and the secret-identity repair ends up being a Dr. Strange/Illuminati deal. This is, in effect, a retcon of the original retcon (you can’t tell me this was the plan from the beginning of “Brand New Day”; there was no plan back then, other than “change continuity and then figure it out later”), and, in retrospect, probably the way the editors wish they’d done it from the beginning. Still doesn’t make a lick of sense (and try explaining it to someone who last read a Spider-title, say, ten years ago), but it’s at least a basis for moving on — although there’s still a deal with the devil at the core of all of this, however hidden, and that’s going to have to be taken care of some day….

We get the end of Rose Red’s backstory (quick summary: she was a total bitch, but she had her reasons), and, in the present, she finally gets her act together — and just in time, too, as the other Fables are all plotting and squabbling, and the new Adversary’s influence continues to grow. Well-told and fascinating as ever — and about to be the first exclusively-Vertigo title to reach 100 issues, a tribute to its solid concept, expressive art and endlessly-cool characters.

On Mars, Richard Rider’s exchanged his Nova helmet for the Serpent Crown, so Steve Rogers has to step up, connect with the Worldmind and become… Nova-Cap, or something (no spoilers here, since this is all spelled out in the cover image, right?). Fun Avengers-type adventure, with lots of characters and costumes and punching and intrigue, and Deodato continuing to prove a good choice as artist; his ability to draw both action and human expressions effectively makes a good match to Brubaker’s strengths. 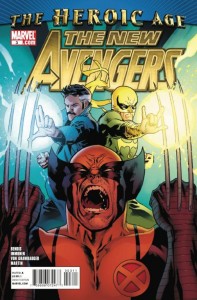 Same as above, although not quite as satisfying as Secret Avengers — the trademark Bendis dialogue and character interaction are still high points, but (1) Immonen’s individual panels and splashes are fine, sometimes even better than that, but somehow he’s not as good at communicating the flow of action between the panels, and (2) the reveal of the Bad Guy is… not very satisfying (it’s one of those “Wha?” Bendis reveals that may or may not mean what it seems, though, so we’ll have to wait and see — this looks to be a trade-paperback story, so it’ll be six issues, and we’re only on #3…).

Meh — Emma dines with Tony Stark and Namor (no, not at the same time), and runs a few errands, while Hope activates/fixes another mutant. Not helped by the art, which looks rushed (all those inkers — plus, Portacio’s pencils seem to me too sketchy, and border on ugly, even under the best circumstances). Fortunately for Marvel, comics being serial soap operas makes it easier to get a buyer for issues like this — fans who’ve enjoyed the previous issues, and know they’re getting the next ones, can’t stand the idea of a gap, especially when the story moves forward at least a little.

A Boys spin-off, featuring Hughie returning to the Scottish village where he grew up. Ennis likes to do these side projects to his main stories — Preacher had a lot of ’em, and even Punisher had the Barracuda mini — but despite the wee brae Scots dialogue this first issue didn’t quite click for me: the now-grown childhood friends are weird in, for Ennis, very standard ways, and the whole Hardy Boys mystery setup seems unpromising. Also: six issues? Really? There’s the curse of the trade again, because having enough pages to make this a stand-alone book seems like the only justification for stretching it out that far, when three or four issues would have been plenty. OK, it’s only the first issue, and it’s Ennis and McRea doing lots of bar scenes (causing happy flashbacks to Hitman), so there’s hope that it’ll end up a wonderful and essential addition to the Boys canon — but here’s hoping it steps up its game quickly.

Final issue. Unlike Vaughan’s Y, The Last Man, this series didn’t work for me — it stalled out in the early 20s, with all the flashbacks and alternate-history stuff and coy hints about other-dimension invaders, and while I kept skimming the issues to see what was going on it just never got me convinced to start buying it again. This conclusion doesn’t make me regret that choice — it’s depressing, for one thing, paying off on the first pages of the book’s very first episode, where Mitch Hundred warned us that his story was a tragedy (it turns out to be a political allegory, where the elected official wins the battle against the outside adversary — maybe — but loses the war with himself and his own ideals, in particularly shocking and self-serving ways). It also feels too crammed and rushed, with so many event summaries and twists and psychological reveals that it all becomes a jumble; a few more issues to stitch everything together might have helped. It’s not horrible — Vaughan’s far too good a writer for that — and maybe my reaction is colored by my (childish) desire for happy, optimistic endings, and maybe rereading all 50 issues would make the structure and themes work a lot better, but for now I’m going to have to chalk this one up as a noble failure

Logan fulfills a promise to his dead pal Nightcrawler, and learns about himself, and about faith, in the process. Eeesh: just the kind of standard-ass sentimentality that Aaron is usually so good at avoiding, with his cynical B-movie humor and energy. Nightcrawler fans will want it, and might even shed a tear, but it just felt like treading water from here.

With 40 years of experience in comic reading, collecting and reviewing, English Professor Phil Mateer has an encyclopedic mind for comics. Feel free to ask Phil about storylines, characters, artists or for that matter, any comic book trivia. He will post your questions and answers on the AABC blog. His knowledge is unparalleled! He is also our warehouse manager, so if you are looking for that hard to find comic book, ask Phil!
View all posts by Phil →
This entry was posted in New Comics, Reviews and tagged Bendis, Boys, Deodato, Ennis, Ex Machina, Fables, Highland Laddie, New Avengers, Secret Avengers, Spider-man, Vaughan, Willingham, Wolverine, X-men. Bookmark the permalink.