It Came From the Back Room #3

Standard recap: I’m slowly going through AABC’s one-million-plus back-issue room, restocking the boxes on the sales floor and pulling stuff to sell as discount/overstock/special items. At my speed (especially with the school year now starting up again), this amounts to a two-year project, and I’m currently on the letter “N.” Here are some of the titles I’ve been encountering: 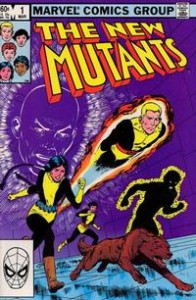 This is Volume #1, the one that went 100 issues, and which counts as the first Uncanny X-Men spin-off title. Claremont and artist Bob McLeod created the younger mutants of the title and published their first adventure as Marvel Graphic Novel #4; the comic itself, pictured at left, was cover-dated March, 1983. McLeod is replaced by Sal Buscema as penciller by issue #4, although he continues to do inks for a few more issues, but Claremont continues as writer up through issue #54. It’s very much part of the early-’80s Claremont traveling mutant circus, with the same strengths (and weaknesses) that are on display in Uncanny, although the younger characters create a lot more emphasis on coming-of-age stories and adolescent angst. 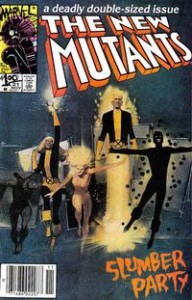 The biggest change in the book’s early years comes with issue #18, when Buscema’s solid, clear house-style art is replaced by Bill Sienkiewicz, who adopts a (then) wildly-experimental, impressionistic style that caused massive reader debate (on the letters page, since there was no Internet back then; if there had been, the art debate would have kept flame wars going for months). Sienkiewicz’s energetic experimentation really gooses the stories along, and between the introduction of the alien Warlock, the fight with Professor X’s insane son Legion, and the whole Fat Karma thing, there’s plenty of entertainment until he leaves with issue #31. Subsequently, the title settles down, with a succession of artists — Steve Leialoha, Mary Wilshire, Rick Leonardi, Jackson Guice — until Claremont leaves as writer and is replaced by Louise Simonson, who shepherds the title along, mostly with Bret Blevins but with the occasional interesting fill-in (John J. Muth with issue #62; John Byrne on #75) until issue #86, when a total rookie artist — one Rob Liefeld — shows up. 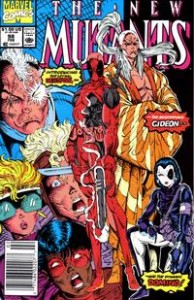 Liefeld has tons of youthful enthusiasm, little regard for the finer points of penciling (like, say, anatomy), and a number of ideas for characters that he’s been doodling since high school study halls; the first, Cable, shows up in issue #87, and a number of others — Gideon, Domino, Shatterstar, and especially the sarcastic mercenary assassin, Deadpool — show up in the three-part story that ends the title’s run, starting in issue #98 (no, that one isn’t in the discount bins; it’s by far the most expensive book of the run now, with Wizard pegging a NM copy at $90. I kept hoping to come across a forgotten stash of them in the back, but no such luck…). 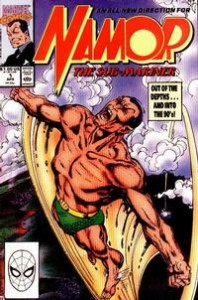 Namor is the other “N” title this time, and is a ’90s title, as opposed to New Mutants‘s ’80s sensibility. That isn’t apparent at first, though — for the first 25 issues, it’s a John Byrne project, both art and story, and showcases Byrne’s super-tight art and big-idea plotting (including Namor against a literal corporate headhunter in issues #8 and 9, involved in an Invaders reunion in #10-12, and, most notably, against a resurrected Iron Fist — who’d been killed off in his own title, in a particularly stupid story — and Wolverine in issues #21-25. At that point, Byrne gave Namor amnesia, relinquished the art chores to newcomer Jae Lee (while remaining as writer), and embarked on an eight-issue quest story. 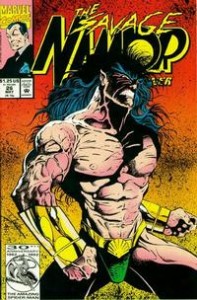 Lee’s art is when the book’s style enters the ’90s, because it’s the kind of scratchy, murkily-rendered effort that the early Image creators were popularizing then. Today, it’s… interesting, but doesn’t hold up that well (in contrast to Byrne’s still-fresh-looking work); the profusion of extra ink lines, the lack of background detail, and the overall grimness of approach make it too sterile. Byrne leaves with #33, to be followed as writer by people like Bob Harras and, later, Glenn Herdling, and the title sinks slowly into mediocrity, dying with a whimper a few years later. Still, those first 33 or so issues are a bargain if you can find ’em cheap enough — ironically, of course, the very point of this post….

With 40 years of experience in comic reading, collecting and reviewing, English Professor Phil Mateer has an encyclopedic mind for comics. Feel free to ask Phil about storylines, characters, artists or for that matter, any comic book trivia. He will post your questions and answers on the AABC blog. His knowledge is unparalleled! He is also our warehouse manager, so if you are looking for that hard to find comic book, ask Phil!
View all posts by Phil →
This entry was posted in News & Promos, Reviews and tagged Chris Claremont, Deadpool, Jae Lee, John Byrne, Louise Simonson, McLeod, Namor, New Mutants, Rob Liefeld, Sienkiewicz. Bookmark the permalink.