It Came From the Back Room #41

Standard recap: I’m slowly going through AABC’s one-million-plus back-issue room, restocking the boxes on the sales floor and pulling stuff to sell as discount/overstock/special items (these are featured at the discount racks at the west end of the store for a couple of weeks after each post, and then go to the discount racks on the east end of the store for a few weeks, and then disappear into our warehouses, so get them while you can). I’m going through the alphabet backwards (don’t ask), and at my speed (especially with the school semester in full gear), this amounts to a two-and-a-half-year project.  This week, we’re featuring

Why “flagship”? Well, there’s the name thing — “DC” comes from, yes, “Detective Comics” — and the fact that it’s the oldest continuously published comic in the US, with a first-issue cover date of March, 1937, over a year before Action #1 (although, of course, the Caped Crusader himself didn’t show up until issue #27, dated March, 1939). Just looking through the covers is a

capsule history of comics trends, from the pulp-influenced ’40s (seen here in the menacing Joker-with-guns pose from issue #69) through the toned-down Comics-Code-influenced silly-sf ’50s (check out the “captive planet” cover for issue #256, which looks like it wandered in from an issue of Strange Adventures) to the “New

Look”/back-to-detective-basics ’60s, where the transition from the stupid-aliens cover in #326 to the Infantino mystery in #327 sums up the extreme change in style nicely. The ’70s might be the most fondly-remembered decade for many 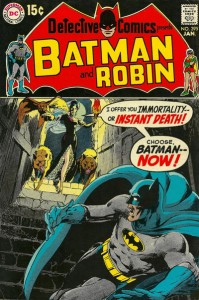 fans; it starts with the January, 1970 issue, the first Detective with a Denny O’Neil/Neal Adams interior story and winds through a few more years of occasional Adams work, the 100-Page Giants from issues #438-445 (many with the Archie Goodwin/Walt Simonson Manhunter serial, plus lots of Silver and 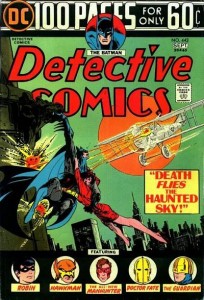 Golden-Age reprints, and lead stories by Adams and, in the pictured #442, Alex Toth), and, from issues #471-476, the Steve Englehart/Marshall Rogers run that some of us would argue is the post-’40s Detective high point. Not only that, 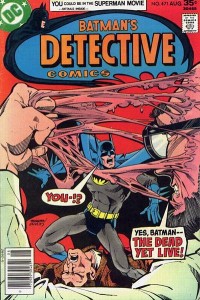 but issues #481-495 mark the transition from 1979 to 1980 with a 64-pg. $1 format that sees lead stories featuring Batman, plus Robin/Batgirl stories, plus other, rotating back-ups starring characters like Commissioner Gordon and Steve Ditko’s Odd Man.

None of these are sitting on the discount racks, of course, 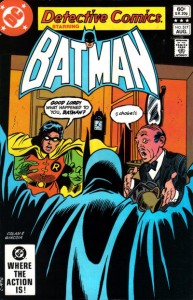 but many issues from the ’50s up are now restocked and available on the main floor, with the more key issues (like this, this, this and this) also on display. The bulk of the bargains start after issue #500, in the early ’80s, and for 99 cents each there’s a lot of cool Bat-reading; for one thing, at this point Gene Colan comes over from Marvel, fresh from his work on Tomb of Dracula, and settles in for a long Detective run — issues #510, 512, 517 (part of a great Batman-vs.-vampires crossover with Batman), 523, and most of #s 528-567 — although issues #547-552 have art by Pat Broderick

instead, which is a considerable step below Gentleman Gene (to make up for it, #549-550 have an Alan Moore-scripted Green Arrow back-up story with art by Klaus Janson). Most of the non-Colan issues from #500-526 have art from Phoenix’s own Don Newton, so they’re worth checking out, too — especially #526, an anniversary issue (Batman’s 500th appearance in Detective, with a 56-page story by Newton). Writer Doug Moench starts on the title with the next issue, #527, and he and Colan provide a well-regarded couple of years on the book, involving the early Jason-Todd-as-Robin issues, love interests Nocturna and Catwoman (who practically 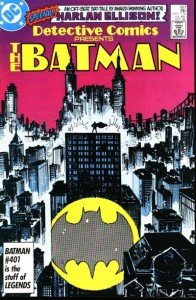 becomes a co-star for awhile), a reinvigorated Catman as antagonist, Harvey Bullock as comic relief, and a tight continuity with the Batman comic, as stories frequently cross over, requiring readesr to follow both books. Moench’s last issue is #566, while Colan’s last issue, #567, boasts his art over a script by Harlan Ellison; after that, Mike Barr and Alan Davis are the regular team for a while, through #574, after which Todd McFarlane contributes three issues. Barr stays on through issue #581, and then there’s a fallow period, 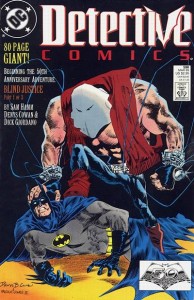 mostly with Alan Grant scripting and Norm Breyfogle drawing, enlivened by a three-parter in issues #598-600 by Batman movie scriptwriter Sam Hamm and art by Denys Cowan (although, truth be told, that story seemed considerably more worthwhile at the time then it does in retrospect).

The early 600s — and the early ’90s — are similarly flat; a John Ostrander three-parter with covers by legendary 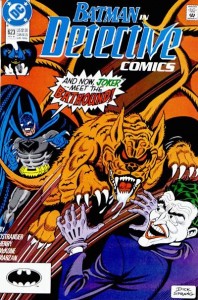 Batman artist (and Arizona resident) Dick Sprang in issues #622-624 is fun, and Marv Wolfman and Jim Aparo team up for a while in issues #625-628 (over Michael Golden covers). Then, Peter Milliogan comes on board, and the scripts get both stranger and more intriguing; he and Aparo are in #s 629-632, with Tom Mandrake art in #633, and then after some other creative teams Milligan and Aparo are back in issues #638-640 and #643; Aparo also draws #s 641-642 over Alan Grant scripts. After that, Chuck Dixon, who pretty

much defines competent-but-generic, is scripter with a number of artists.

The next story of import occurs in #659, and it’s one getting a lot of interest this year: it’s part two of the “Knightfall” serial, which begins in Batman and crisscrosses through the Bat-titles for almost a year, leading to both the (temporary) end of Bruce Wayne as Batman, and the inspiration for this summer’s much-anticipated Batman movie. Jim Balent (of Catwoman and Tarot fame) does the art chores in #660, part four of the

crossover, and Dixon continues as writer (with Kelley Jones supplying most of the covers) through the aptly-numbered issue #666, the last issue of Detective before “Knightfall” and and another character takes over the Batman cape….

…but that’s a good place to stop, since those are all the issues that are on the discount racks for now. That leaves 20 years of Detective to go, though, so buy them while you can, create some rack space, and come back in two weeks to see how the Dark Knight fared in the rest of the ’90s and the ’00s.

With 40 years of experience in comic reading, collecting and reviewing, English Professor Phil Mateer has an encyclopedic mind for comics. Feel free to ask Phil about storylines, characters, artists or for that matter, any comic book trivia. He will post your questions and answers on the AABC blog. His knowledge is unparalleled! He is also our warehouse manager, so if you are looking for that hard to find comic book, ask Phil!
View all posts by Phil →
This entry was posted in Comics History, DC, News & Promos, Reviews and tagged Batman, Detective, Don Newton, Doug Moench, Gene Colan, Harlan Ellison, Jim Aparo, Marshall Rogers, Neal Adams. Bookmark the permalink.