It Came From the Back Room #17

Dwayne McDuffie died last week, on February 21. He was a co-founder of Milestone Comics, and animation producer of Static Shock, Justice League Unlimited and Ben 10: Ultimate Alien, but in addition he was an admirable writer of comic books. This week, instead of the usual back-room letter-J stuff, I pulled some of his best work for the cover-price racks.

McDuffie was working as an assistant editor at Marvel in the late ’80s when he came up with this concept: a comic focusing on the guys who clean up 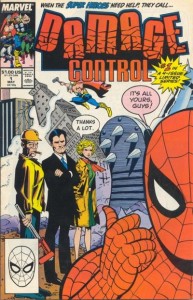 after superhero fights, repairing all the damage, sweeping up the spaceship and giant robot parts, and getting New York City back to normal for the next invasion from Atlantis or appearance of Galactus or whatever. The first four-issue mini-series, from 1989, introduces new account executive John Porter, traffic manager (and eventual romantic interest) Robin Chapel, Damage Control co-owner Ann-Marie Hoag, comptroller Albert Cleary, cigar-chomping foreman Lenny Balinger, and others — plus guest appearances by Spider-Man, Dr. Doom and the FF, Iron Man and the X-Men, as the company deals with various construction disasters, irritated super-clients, 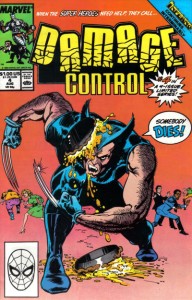 bureaucratic infighting and other hazards. This is all a lot of fun, especially since the art is by Ernie Colon, whose talents for caricature and clear storytelling let him juggle the dozens of characters and action sequences with aplomb.

The first series was successful enough to lead to two others, in 1990 and 1991: the second is an “Acts of Vengeance” crossover, in which it’s revealed that Mrs. Hoag’s co-owners are Tony Stark and Wilson (Kingpin) Fisk, who sells Damage Control out from under her so he can profit from all the super-powered destruction he’s causing in New York City; it’s got 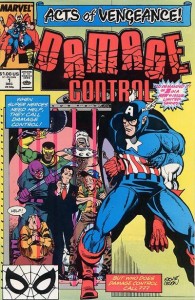 appearances by Captain America, She-Hulk, the Punisher and Nick Fury to keep the superhero fans interested, although the focus, as ever, is on the team of competent civilians coming up with clever ways to do their jobs and trump their clueless corporate overlords.

The third mini has the Hulk taking in a baseball game at Yankee Stadium (in a first issue drawn by Kyle Baker, the only non-Colon book in the original run), plus Speedball and the New Warriors, plus a Damage Control movie being filmed, plus a cosmic-powered ex-construction guy named Edifice Rex; it’s all just as amusing and brainy as that name suggests.  The 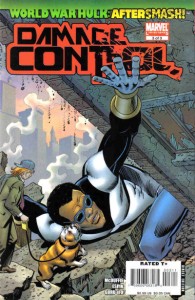 original price of all three minis was $1 per issue; that’s what they’re available for right now, too.

That was it for Damage Control for almost 20 years — but McDuffie returned to it in 2008, in a three-issue “After-Smash” mini following the “Planet Hulk” crossover (with NYC mostly destroyed, it was a perfect time to reintroduce the characters). They hadn’t changed that much, and while much of the mini focused on the new Goliath, the son of Bill Foster (McDuffie doing some continuity repair after a particularly stupid “Civil War” death there),  the pleasure was in seeing the old crew go through their paces one more time. New artist Salva Espin couldn’t quite reproduce Colon’s 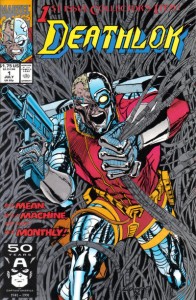 cartoony charm, but offered smooth-enough art, and the comic was a pleasant, non-disappointing reunion.

McDuffie headed up the 1990 revival of this character, first in a four-issue mini-series and then in the first five (and a few later) issues of his ongoing title. I was never a big fan (the later non-McDuffie stuff, especially, blends into all the other ’90s scratchily-drawn, overly-grim titles for me), but note that McDuffie’s work on those earlier issues was solid enough, and popular enough, to sustain  three years

of lesser lights running the character straight into the ground.

I covered the history of Milestone last October in It Came From the Back Room #6, here:   http://allaboutbooksandcomics.com/wp/it-came-from-the-back-room-6/  , while I was going through the “M” titles; now, the first few issues of the core books — Static, Icon, Blood Syndicate and Hardware — are out on the cover-price racks again. You can read what I posted earlier to see why you should care, but suffice it to say that they all have their charms — and the Hardware issue’s opening sequence, involving a bird, was taken by most readers as a metaphor for McDuffie’s leaving the secure editor/freelancer life for the 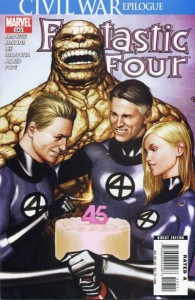 risks and rewards of owning his own company, and was reprinted on a lot of websites last week after his death.

McDuffie takes this over right after “Civil War” and J. Michael Straczynski messed it up, and his very first issue, #542, manages to make more sense, and do more to rehabilitate Reed Richards’s character, than the last two years’ worth of continuity. In short order, he sends Sue and Reed off to the moon of Titan for a second honeymoon, brings in Storm and the Black 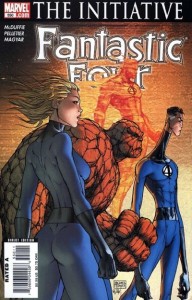 Panther to sub for them (an inspired choice, since T’Challa is Reed, in a lot of ways, and Ororo makes a passable Sue, both in power level and in her relationship with her husband), and then mixes Galactus and the Silver Surfer, Gravity, the Frightful Four, and future-timeline versions of both Dr. Doom and the FF into the brew over the next year, through issue #553. It’s a great run, the best since Mark Waid’s, and it’s too bad McDuffie and artist Paul Pelletier didn’t stay longer — they manage to blow their replacement team, the highly-touted Mark Millar and Bryan Hitch, right out of the water.

McDuffie, who knew the characters very well from helming the Justice League Unlimited cartoon for years, took over the comic in 2007;  following Brad Meltzer’s much-hyped but not-particularly-compelling run on the first 12 issues of the relaunch, he began with a bang: a four-part fight with the Injustice League (complete with a Hall of Doom) that started in the Justice League Wedding Special and ran through issues 13-15 of the regular title. That first tale is a showcase of McDuffie’s strengths: everyone’s solidly in character, by turns smart, funny, heroic and snarky for the good guys, and smart, craven and sneaky for the bad, with a plot that twists and turns admirably, and enough well-

McDuffie write most of the next few years on JLA, through issue #34, but was often hamstrung by editorial decisions: crossovers involving the Tangent universe and with Final Crisis, and, most irritatingly, the mandated departures of Superman, Batman and Wonder Woman because of events in their own titles, and of Hal Jordan and Green Arrow to form their own spin-off faction. There’s some good stuff, too — McDuffie is never less than interesting, and a three-parter in issues #24-26 in which Vixen fights the story-spinning spider-god Anansi (and in the 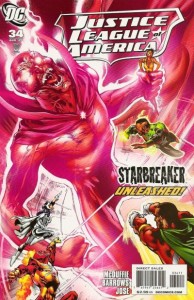 process resolves a number of Grant Morrison plot threads from his Animal Man run) is a high point, as are the crossovers with McDuffie’s Milestone characters in issues #27-28 and 30-34. At that point McDuffie was fired for, basically, being honest online about his dealings with DC’s ham-handed editorial meddling; he returned to animation and Ben 10, where he was considerably more appreciated and better paid, and that’s where he was when he died, following complications from heart surgery. He’s gone, but the books are still there, with their thrills, chills and intelligent roller-coaster storytelling: not a bad legacy, all things considered.

With 40 years of experience in comic reading, collecting and reviewing, English Professor Phil Mateer has an encyclopedic mind for comics. Feel free to ask Phil about storylines, characters, artists or for that matter, any comic book trivia. He will post your questions and answers on the AABC blog. His knowledge is unparalleled! He is also our warehouse manager, so if you are looking for that hard to find comic book, ask Phil!
View all posts by Phil →
This entry was posted in New Comics, Reviews and tagged Ben 10, Damage Control, Deathlok, Dwayne McDuffie, Ernie Colon, Fantastic Four, Hardware, Icon, Justice League, Justice League Unlimited, Kyle Baker, Milestone, Static, Static Shock. Bookmark the permalink.