It Came From the Back Room #10 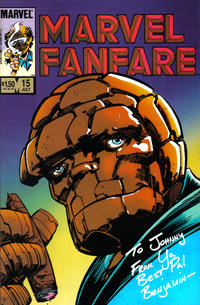 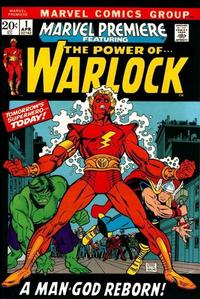 This is one of those institutions peculiar to comics: the try-out book, which a company uses to publish a couple of issues of a new series, and, if sales seem to justify it, then reward that series with its own title.

The best-known examples of these showcase books are, unsurprisingly,  DC’s Showcase and, for a while, Brave and the Bold back in the ’50s and ’60s, which launched titles both major (Green Lantern, Justice League, Teen Titans) and minor (Creeper, Inferior Five). Marvel Premiere started with Warlock (the Gil Kane-drawn original art to the last page of that first issue, in which Him is renamed Warlock, and gets his costume, and gets his soul gem, is on my wall about three feet away as I’m typing this. No, that isn’t relevant to our discussion; I just wanted to brag). Issues #3-14 feature Dr. Strange, with a Stan Lee/Barry Smith story in #3, and Frank Brunner coming aboard as inker for the next issue, with pencils in #s 6 and 9-14; he’s joined by young writer Steve Englehart with that ninth issue, and together they make Doc popular enough to jump from Premiere to 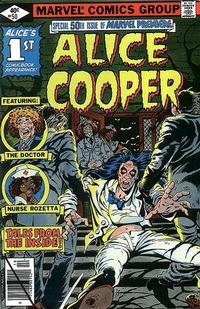 his own book. Iron Fist is up next, and his kung-fu moves hold the fort from issues 15-25 (with that last issue featuring the first collaboration between writer Chris Claremont and artist John Byrne). After that, the long-term runs are over, in favor of one- or two-issue tryouts of worthys like Hercules, Satanna, the Legion of Monsters and Woodgod. There are some interesting snapshots of the ’70s comics scene here — some cool pre-American Flagg! Howard Chaykin in #s 32 (Monark Starstalker, one of his many space-themed swashbucklers), 33-34 (Solomon Kane) and 56 (Dominic Fortune), a John Byrne-produced recast of Ant-Man in #s 47 and 48, and the comics debut of Alice Cooper (drawn by Tom Sutton) in #50 are probably the high points, while Dr. Who fans should seek out the first American comics appearances of the inimitable Doctor (although they’re British reprints, not “new” stories), 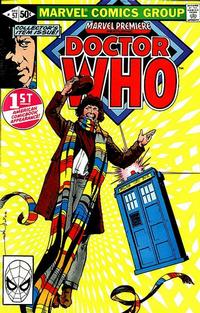 in issues #57-60. There weren’t a ton of Premieres that made it out to the discount racks, but some did, so look around — and, of course, all of them are now stocked and available as regular back issues.

This took Premiere‘s place on the stands in 1982, and, as its name implies, is a response to the growing comics specialty shop and fan market of the early ’80s: not a try-out book, but a showcase of work by comics’ most popular creators — in theory, at least (as we’ve seen in more modern times, with books like Legends of the Dark Knight or Justice League Confidential, series that start 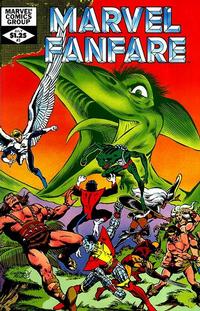 out with high intentions and A-list creators are often down into the C- or D-list dregs after a couple of years). Fanfare was fortunate, though, because editor Al Milgrom kept things (usually) interesting, and his self-drawn “Editori-als” on the inside front covers were amusing and informative introductions to each issue. We had at least some overstock on most of these, and right now they’re all on the discount rack at the front of the store, with cover prices ranging from $1.25 to $2.25. What’s there? Well not the first issue, but the second, with a Chris Claremont/Michael Golden X-Men/Spider-Man team-up set in the Savage Land. That story continues with #3 (Dave Cockrum art) and #4 (Paul Smith art), as the X-Men meet up with Sauron, Ka-Zar and others. After that, high points include a Claremont/Marshall Rogers/P. Craig Russell Dr. Strange story in 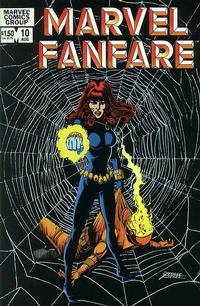 #5, a George Perez co-plotted and pencilled Black Widow serial in #s 10-13, a warmly humorous and absolutely gorgeous 19-page Barry Smith Thing/Human Torch romp in #15, and a 21-page Frank Miller Captain America story in #18 (and, yes, all of these are available on those discount racks). Then, there’s a Jim Starlin Thing/Dr. Strange/Hulk tale in #s 20 and 21, a Doug Moench/Mike Ploog Weirdworld story in #24 (it’s in #s 25 and 26 too, but drawn by Pat Broderick, which represents a fairly steep drop in quality), a John Byrne Hulk story in #29 that’s told entirely in splash pages, a Moench/Brent Anderson/Al Williamson Moon Knight story in #30, and a Charles Vess Warriors Three/Thor/Loki story in #s 34-37.  After that, the really 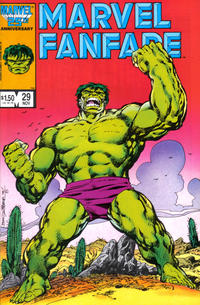 cool stuff starts to thin out — but there’s a Mike Mignola/P. Craig Russell Sub-Mariner tale in #43, and #45 is an all-pinup issue, while #47 has a Michael Golden Hulk/Spider-Man fight (amusingly, while the Overstreet Guide has that last book at #3, Wizard wants you to think it’s worth $12. As of Thanksgiving, we had a $3 copy of it out in the regular back-issue boxes that’s been there for six years, so Wizard‘s apparently a little off on its hotness quotient). Issue #51 is double-sized, and offers an historical oddity: the original first issue to the second Silver Surfer series, written by Steve Englehart and with John Buscema art, which was shelved and never used (the Editori-Al covers the complicated story behind that move). Similarly, issues #s 56-59 cover a Shanna the She- 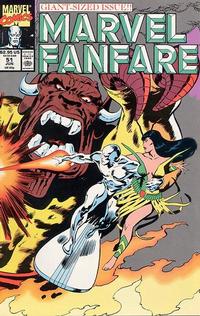 Devil four-parter whose first three parts were written by Steve Englehart (and drawn by Carmine Infantino and Bret Blevins) in 1978, for a Shanna book that never got off the ground; Milgrom then got Gerber to write the conclusion in 1991, 13 years later, with Tony DeZuniga art. As with the Golden story in #47, Wizard thinks these issues are worth a lot more than the Overstreet Guide does — between $10 and $15, as opposed to $2.50 (we have them for $3 or $4 each). Wizard similarly thinks the last issue of the run, #60, with a Walter Simonson Black Panther story and a Paul Smith Daredevil story, is going for $20; the Overstreet Guide says $2.50, and we have a copy out in the boxes for $5. As with everything, the real value to you is exactly what you’re willing to pay for them….