Watching football and reading old comics on a Sunday, pleasant to say the least. 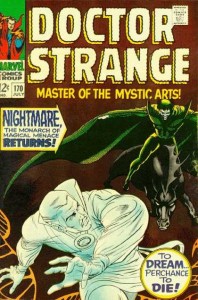 By this point in the Mighty Marvel Manner, Stan Lee hadn’t been writing nearly as much.  So what you do get is the sweet Roy Thomas work on Dr. Strange, which is completely worth it.  Nightmare is a pretty doofy villain, and honestly he was defeated by being wrapped in a cloak.  That’s not a joke.  But the issue itself was pretty enjoyable.  Artist Dan Adkins was doing his best Ditko impression, and was fairly successful.  What’s best about Strange books is the backgrounds, cuz everyone always goes a little crazy with the designs.  It’s a lot of fun.  And I can’t possibly complain about a comic with the phrase “ectoplastic self” right in it.  More info can be found HERE.

Dr. Strange recently lost his title to Dr Voodoo (who actually has no doctorate).  Strange still uses his limited mystical powers in New Avengers which is available on the stands now. 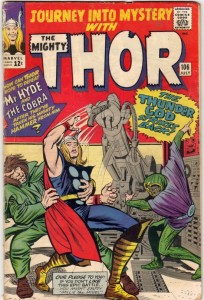 There are two things you will always find in an old school Thor comic.  The first is bizarre villains.  In this case we get both Hyde and Cobra.  They are almost opposites in power, so it leads to an interesting story with Thor having to deal with the both of them.  Not to mention that it’s Kirby’s designs that make them so much fun to look at.  The other thing you will always find is a situation when Donald Blake can’t find his cane or Thor loses his hammer.  That 60 second rule is used heavily as a plot device in old Journey issues, and it gets kind of annoying, but just this once it works ok.  This was a fun Lee/Kirby joint.  Thor is always just crazy enough to be fun.  More info can be found HERE.

Thor is everywhere.  With the movie coming out, there are several different series he’s starring in.  Most recently Matt Fraction took over on the main Thor title, Jonathan Hickman is working on an Ultimate Thor mini-series, and Roger Langridge and Chris Samnee are doing the amazing Thor: The Mighty Avenger.  Buy that third one; it’s the best. 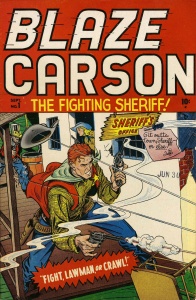 Ok.  I don’t even really know how to explain what I just read.  It’s a series of short stories from the 40’s, so what was I really expecting?  The first one is the quest of Billy the Kid’s gun after his death and all the damage it’s done.  The second is a horse stealing and riding tale.  The third is Tex Taylor and just a lot of killing.  The fourth is about pies.  And the final story is about stopping train robbers.  Long story short, this is awesome.  It’s everything I expected it to be.  A 40’s western anthology book.  It’s perfect for seeing where the silver age comics came from and analyzing how far we’ve advanced in 60+ years.  It’s the kinda book where ya just wanna be careful to preserve it, cuz it’s so damn cool!  More info can be found HERE.

Not much from Blaze Carson these days, but there’s till plenty of westerns all over the place.  Our back stock has a ton of them from Gene Autry to the Lone Ranger.  If you’re looking for a more current comic, there’s the Dynamite Lone Ranger series or DC’s Jonah Hex.

And that’s it! Now it’s just football, no more comics for me!  See you in a few weeks folks