The Latest and (Mostly) Greatest #8 by Dan!

My Top Five (The Five Best Comics of the Week): 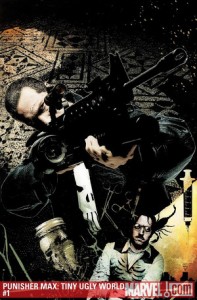 This book makes it to the top five based on how many times I went “oh holy S#!*” while I was reading it.  Lapham?  Still crazy.  But that’s not necessarily a bad thing.  Much like Garth Ennis, Lapham often tries to gross out with the extreme, and he succeeds so much.  I found myself unable to stop reading this book no matter how bad I might have wanted to.  The reason this is the top book of the week is because it lingers.  Like, I read this in the middle of everything, and all the other books I was like “well that’s not as extreme as that Punisher book I read…” so come on, that’s gotta be a good thing for it!  Now I feel like I need a shower…

Sorry guys, but I just love this way too much.  If you like Morrison, you’re going to like this.  It’s more of the exact same mythos he’s beeen building for years.  It’s super intense, and exactly the kind of story I want it to be.  I’ve become a huge sucker for Irving’s art which is much more digital and flat then I’m used to, but I absolutely love it.  Irving is one of the few people I trust to use computer style art to it’s intended use.  The whole last three issues have been fantastic, maybe the best of the series, and I’m completely excited for Batman Inc. and The Return.  You should be too, cause this stuff is excellent.

Sometimes you just need a little mind numbing violence, and that’s what Kick Ass supplies.  I’m telling you guys, it’s like a movie about a runaway train, you know you all wanna see it, ya just won’t admit it to your friends.  I’m actually fairly interested in where things are going to go with Hit-Girl, but I’m afraid Millar will go completely generic and boring with it.  Also worth noting is that Romita is only doing breakdowns for these issues, with Tom Palmer finishing it up.  Does that mean it will come out on time?  Doubtful, but at least we now know there smart enough to get someone else involved to speed this up. 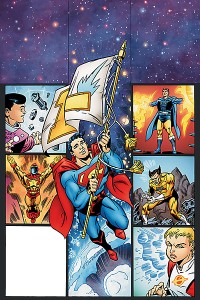 I absolutely love this, even if it is just a re-examination of everything that’s ever happened in the DC universe.  It’s completely worth it for fans of the Universe, and it may actually help explain things to people who have never been really invested in it.  This has been the DC equivalent of Kurt Busiek’s title Marvels, but I actually think I’ve enjoyed this much more.  It’s been a fun series, and I’m interested to see how they’ll address all the crazy 90’s crisis related stuff.  The only problem I have is that I don’t know how long it’s supposed to go for.  Ten issues, more?  I know it’s a mini-series, but they stopped labelling it on the cover which is strange…

I’m sure I’ve said this before, but since Milligan has taken over I have absolutely love this book.  It’s been completely utterly and entirely insane.  Seriously, he had Hellblazer go so crazy he cut off his own thumb.  He’s dragged his  pet project, Shade the Changing Man, into this, whose bright colors completely contrast the dark bleak attitudes of Constantine.  The very end of this issue was another “ah crap…” moment in the life of Constantine that I expect to come back up later.  Can’t forget the art, which is pretty with either artist.  Their completely different styles work effectively for the two separate eras that are covered.  Great stuff.

Green Lantern Corps #53 Writer: Tony Bedard Artist: Tyler Kirkham: I thought I was going to hate this, but I didn’t.  Kirkham and Bedard put together a fun issue with a new villain, and I’m excited to see where this goes.

Steve Rogers: Super Soldier #4 Writer: Ed Brubaker Artist: Dave Eaglesham: The end of a fun mini.  Nice to see a quality 4-issue series come out and be enjoyable the whole way through.

Haunt #5 Writer: Robert Kirkman Artist: Greg Capullo: I love the story here, but just can’t handle the art at all.  Losing Ottley was not good for this book, and Capullo is not a good fill replacement.

DC Halloween Special 2010 Writers/Artists: Various Very hit or miss, if you like anthologies, then this is the kinda book for you.

Muppet Show #11 Writer/Artist: Roger Langridge: I can’t stop saying how great this is.  Hilarious and fun every single issue.  I always look forward to this.

Soldier Zero #1 Writer: Paul Cornell Artist: Javier Pina: Being stuck with an idea by Stan Lee makes this an unfortunate assignment for Cornell and Pina.  Mediocrity at it’s finest (is that an oxymoron?)

Tomb of Terror One Shot Writer/Artist: Various I’ve been enjoying these black and white magazine style issues a lot, and this one doesn’t disappoint.  Not the best of the series, but still very fun.

X-Factor #210: Writer: Peter David Artist: Valentine De Landro: Still quietly the best X-book.  The art suffers a little this issue, but the fantastic story really makes up for it.

The Weak of the Week (Definitely not the best, if you know what I mean)

Ugh.  I have absolutely no 90’s nostalgia connection to Carnage so this series has absolutely no real importance to me of any kind.  It’s not very clear, and not very good.  I honestly have no idea what I read there, except when the end told me in a letter from the editor that I had to love it.  It also told me to wait, because this series is once every two months, and I just found myself wondering why.

I enjoyed the original tangent universe, but I can’t stand it any more.  This huge anniversary issue combines it with the current JLA and the Crime Syndicate from Earth-2.  It’s just confusing and not very good.  I promise I’m done bashing JLA after this, and that’s just because I’m not going to read it anymore.  I love James Robinson, and I like Mark Bagley, but not what they’ve done on this title…

Why should I care about this?  Thor gets angry and begins smashing everything.  He kills a lot of stuff that I don’t know about.  Valkyrie gets some wings while in hell with a pregnant Hela. Loki does some mischievous Loki style things, and I just don’t care.  The Frank Cho art doesn’t even make this any better.  I just don’t care at all, and Loeb doesn’t give me anything to care about at all.

And that’s the week!  Another post will come soon!