Oh the things I do for you people!… I just spent three hours editing for one of my classes and I still am giving you what you so desperately crave… more reviews! Let’s see if I can keep this in English for an entire article! 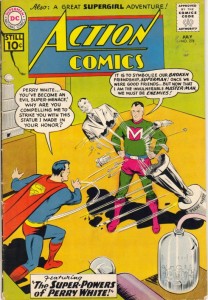 Alan’s eyes lit up yesterday when he saw I was reading this comic, and he basically went on to spoil the entire story for me. Perry White gains super powers (and loses a pot belly) by eating some mysterious plant found in his backyard (as we all have done at some point). It turns out that the plant is an alien bent on taking over the world. Add in some post-hypnotic suggestion to avoid being hurt by Kryptonite, an extra Supergirl story and the traditional “lost powers” cliffhanger, and you get yourself the genuine example of what a Silver Age comic can be. It’s fun, doofy and definitely worth reading. (I resent a segment of that last sentence!….editor Alan) More info can be found HERE 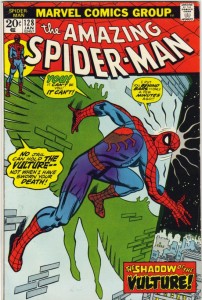 So if this story is any inclination, during the Bronze Age, Spider-Man became Batman. This is a straight one-and-done detective story, where Peter Parker actually deduces who the villain is, who they killed and how it all happened. In the meantime, he does the traditional “Oh no! I ran out of webbing! I could have died routine,” but otherwise it’s a fairly traditional detective story, and it’s weird. You don’t really see much of the Peter Parker-solves-a-mystery type story, but here it is. I wonder if sales were lacking and Stan Lee put some kinda mandate in here to make it how he wanted. It’s not bad, it’s just an odd story for Spider-Man. More info can be found HERE

Spider-Man is still everywhere. You’re most likely to find him in the twice monthly Amazing Spider-Man book, but also check out New Avengers, and probably any title that’s running low in the sales numbers. 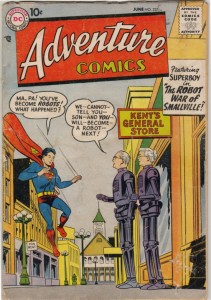 So, the Spider-Man comic didn’t really do anything for Alan, but all he had to say about this was “How can you not love this cover?,” and he’s totally right. Hoo-Boy is this a weird story! Robots, aliens and atomic bombs all combine to screw with Superboy, but of course things end up happily ever after. Aquaman provides the back-up story, saving whales and having his private life exposed. The second back-up comes from the Green Arrow, but it’s not the hippie we’re used to. This is the much more clean cut boring one that basically just uses forked branches to solve all his lack of arrows problems. Wait, what? More info can be found HERE.

Superboy is visible as his clone self in the self-titled series and Teen Titans. Aquaman just showed up in Justice League #3 and his self-titled series (which is awesome). Green Arrow has his title, and it might get better with Ann Nocenti geared up to take over the writing duties. Check it out in the coming months.

And that’s it! You’re welcome. Now go leave some comments!