Well folks, we’ve survived another Free Comic Book Day.  Did you make it in?  If so, good for you, if not, what did you really have to do that was so much better?  Anyway, I’m still exhausted, but because I love you guys, you’ll still get my post.  Let’s do this! 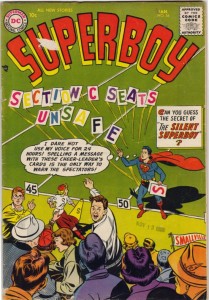 So, Superboy’s suit is made out of some kind of fancy synthetic fiber that protects him from harm, and a scientist gets hold of it and sells it to his friends so they can pull heists whenever they want.  One guy, no joke, robs a zoo by letting out a tiger.  He clearly has his priorities in line.  But of course, the weakness of the synthetic suits is milk (DUH!), so he saves the day.  Then there’s a weird story about people named Clark Kent that just didn’t work for me.  The last story is where Superboy can’t talk for some mysterious reason, so he literally has to use signs throughout the entire thing.  It’s very not-PC, but it’s the kind of thing you expect from the glorious 50’s.  I also enjoy that all of society expects Superboy to say hi to them whenever he flies by… More info can be found HERE

This version of Superboy grew up to be Superman.  But since then there have been many other Superboys flying around Metropolis.  For the current version, look to the self-titled Superboy series (done by Jeff Lemire, of Sweet Tooth) fame, and Teen Titans. 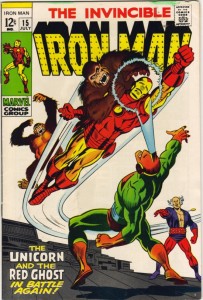 I’m sorry, Iron Man is being attacked by lasers and monkeys on the cover!  How am I supposed to say no to that?  What caught me by surprise was how this was a really well-written story.  Archie Goodwin just let George Tuska’s panels show you what was happening a lot more than normal comics of the time.  The Red Ghost decides to work with the Unicorn to help him figure out why he couldn’t defeat Iron Man. Then Unicorn gets his powers back so they go out to kick some Iron Man booty, if ya know what I mean.  But then come the monkeys.  I don’t even want to get into detail as to why monkeys show up, but just understand that it’s so out of the blue to me that I couldn’t help but smile.  More info can be found HERE

Hey! Iron Man is still around.  Two movies and plenty of comics out there.  The main one is Invincible Iron Man, and it is very, very good.  There’s also a ton of back issues at your local All About Books and Comics, or trades of Iron Man if you’re feeling like not shelling out a ton of money. 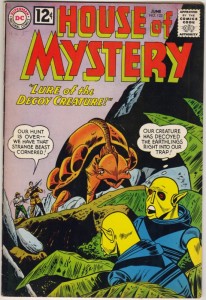 House of Mystery is a strange beast.  It’s of course an anthology series, and it’s in the vein of Twilight Zone with its twists and turns and then zany endings.  But it doesn’t always work.  It has to tell a story in 8 pages that will surprise the reader, and sometimes it tries too hard.  And that’s the main problem with this issue.  The creatures are designed well and they look interesting.  The stories lead into directions that you don’t expect them to.  But then they just end with overwritten explanations.  They try to pull the rug out from under you, but it doesn’t quite work.  The endings always leave me going “all right…” then moving on.  It’s not bad by any means, but it just doesn’t quite work the way I wanted it to.  More info can be found HERE

House of Mystery is now a Vertigo series, and it’s not much like it’s 60s predecessor.  It has little break off stories by guest artists, but it’s no longer a very sci-fi anthology series anymore.  It’s still good, but there isn’t anything quite like the original House Of Mystery was.

And that’s it.  I try to avoid sports talk here, but have you seen the Lakers game?  It. Is. Hilarious.  That is all.