It Came From the Back Room #22 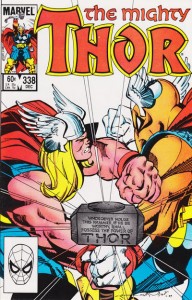 Standard recap: I’m slowly going through AABC’s one-million-plus back-issue room, restocking the boxes on the sales floor and pulling stuff to sell as discount/overstock/special items. I’m going through the alphabet backwards (don’t ask), and at my speed, this amounts to a two-year project. This week, we’re breaking the regular alphabetical pattern, and time-traveling back to stuff I pulled a year ago (before I started doing these writeups). Why? Because it’s a comic character who’s hot right now, with a movie, a crossover event miniseries, and a new number-one issue all calling attention to him: 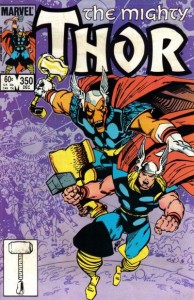 give way to Stan Lee/John Buscema to Gerry Conway/John Buscema to Len Wein/John Buscema to Roy Thomas/John Buscema), although any readers looking for high-end back issues should check the store website, especially here, here, here, here, and here. The modern era of Thor, and the place where the discount issues on the racks really start in earnest, is in late 1983, as creator Walt Simonson takes over a title that’s teetering on the verge of cancellation, and revives it in spectacular fashion.

Simonson’s Thor run, in fact, is one of the first “hot issue” stories of the then- young direct-market era, as Thor #337, under-ordered by dealers, begins to shoot up in value as readers try to track it down, leading to copies going for $10 each (and remember, that’s on a cover price of 60 cents, meaning a 1666% increase in value; for 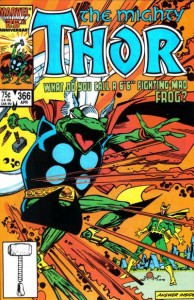 one of today’s $3.99 books, that would be the equivalent of a $64.50 price tag). Simonson, as writer, penciller and inker, stays on the book for 30 issues: there’s the Beta Ray Bill four-parter that kicks off the run, and the Fafnir arc, and the Dark Elf/Surtur one, and the trip to Hel and, toward the end and most memorably, the Thor-turned-into-a-frog one in issues #364-366, a sort of Asgardian-tinged Wind in the Willows that has no business working, but works very well all the same.

Simonson relinquishes the art chores to Sal Buscema, starting with issue #368, but stays on as scripter, and the story quality remains high: Thor gets cursed by Hela with fragile bones, and they begin to break, although he’s using

a Tony-Stark-inspired protective armor that lets him keep going anyway; the high points here are issue #379, a conversation with Fin Fang Foom, and then #380, a battle with the Midgard Serpent that’s told only in splash pages, and in ballad form. The denouement of all of this, over the next two issues, features the Destroyer, Thor’s body pounded into jelly, Hela, and a lot of rousing action, plus a quietly satisfying coda with Loki: the final issue for Simonson, #382, is, appropriately enough, a 300th-issue anniversary. All of these books are worth checking out, especially if you’ve never encountered them before, and a high percentage of them are available right now at 99 cents each, on the discount rack at the west end of the store (right by my corner, of course).

#383 sees the team of writer Tom Defalco and artist Ron Frenz (beloved of a lot of modern-day Spidergirl fans) debut, and they settle in for a long run. It’s not as

innovative or head-turning as Simonson’s, but it’s a solid, entertaining attempt to echo many of the Lee/Kirby themes and tones, and it takes an unexpected turn with issue #433, when the Son of Odin disappears, and the streetwise Earth mortal, Eric Masterson, becomes the God of Thunder instead. This lasts for over a year, through issue #457, when the true Son of Odin returns and Masterson becomes Thunderstrike, getting his own title in one of those developments that probably could only have happened in the ’90s.

DeFalco and Frenz leave with issue #459, and the next few years see a number of teams (Ron Marz and Bruce Zick; Marz and M. C. Wyman; Roy Thomas and Wyman) that fail 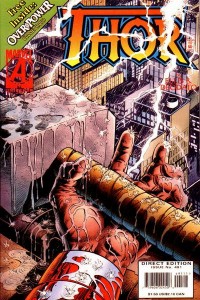 to leave much of an impression. However, toward the end of the title’s run, starting with issue #491, then-new writer Warren Ellis takes over the scripting chores, teamed with Mike Deodato, for a four-issue arc that reinvigorates the character. William Messner-Loebs then takes over the writing, with Deodato continuing the art, through the final issue of the first volume, #502, in September 1996.

This is right around the Onslaught/Heroes Reborn time period that we were just discussing a few weeks ago with Iron Man, and although Thor doesn’t get the reimagination treatment that Iron Man, the Avengers or the FF do, he does get an eventual rebirth, with a new 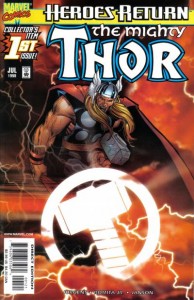 issue of his second volume beginning in mid-1998.  The initial team is writer Dan Jurgens and artist John Romita Jr.; JR Jr. stays through issue #25 (minus a few fill-ins), and then is followed by a number of replacements: Eric Larsen, Michael Ryan, Stuart Immonen, Jim Starlin for an issue, Tom Raney, Joe Bennett, Scott Eaton and others — while Jurgens remains the common thread, as he keeps the writing chores through issue #79. The work is competent enough — a six-year-plus run is nothing to sneeze at — but, like much of his scripting, doesn’t linger in the memory: ten years down the line, I can barely recall any thread or story development (didn’t Thor take over Asgard and start turning into Odin? Wasn’t there a long Elseworlds-type thing going on there for a while…?), while details of some 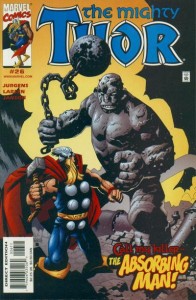 of the Simonson run (Fat Balder; the Executioner at the gates of Hel; Lorelei the seductress and the sappy look Thor got whenever she was around) still resonate, even though they’re an extra ten years older. Too, since the print run on most of the later Volume Two books was relatively low, there are few of them on the discount racks anyway (whereas the Simonson and DeFalco stuff, products of the go-go ’80s and ’90s, were ordered in depth).

The culmination of Volume Two is, literally, the Twilight of the Gods — “Ragnarok,” by Michael Avon Oeming on script and art by Andrea DeVito, in issues #80-85, has a cover tie-in to the whole “Avengers Disassembled” thing 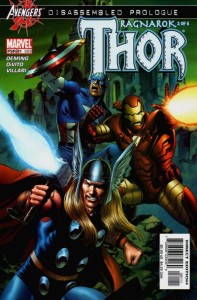 going on in 2004, but it’s actually exactly what it says: the end of the story, with Asgard falling, characters dying, and the title finished. Kaput. Over. Well… for a few years: Marvel, having learned the advantage of letting some characters lie fallow for awhile, brings the Big Guy back in 2007, post-Civil War, with J. Michael Straczynski and Olivier Coipel bringing Asgard to Earth and starting the whole mythology up again — leading, after some renumbering and retro-titling, to the current Journey Into Mystery by Kieron Gillen and Doug Braithwaite, and the new Mighty Thor, by Matt Fraction and Coipel. Those are new books, though, not discount ones, so they’re as good a place as any to end this article.

With 40 years of experience in comic reading, collecting and reviewing, English Professor Phil Mateer has an encyclopedic mind for comics. Feel free to ask Phil about storylines, characters, artists or for that matter, any comic book trivia. He will post your questions and answers on the AABC blog. His knowledge is unparalleled! He is also our warehouse manager, so if you are looking for that hard to find comic book, ask Phil!
View all posts by Phil →
This entry was posted in Comics History, Marvel, News & Promos, Reviews and tagged Beta Ray Bill, Dan Jurgens, John Romita Jr, Mike Deodato, Ron Frenz, Simonson, Thor, Tom Defalco, Warren Ellis. Bookmark the permalink.