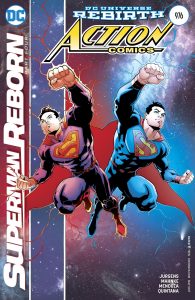 Action Comics is actually kind of a big deal — it’s the conclusion of the four-part crossover with Superman, “Reborn,” and it re-integrates the pre-New 52, New 52 and 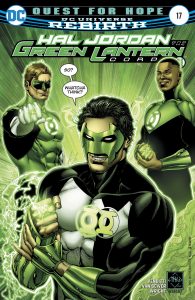 Rebirth versions of the character and his cast — and, presumably, the DC Universe itself — into one unified whole. Pretty good story, too, with Old Pro Jurgens having had a hand in all those versions, and knowing how to wring emotion out of the family-is-everything theme, while Doug Mahnke delivers Mr. Myzptlk as sinister, funny or imposing, as required, makes it look easy, and nails the big splash scenes at the end, too.  Like Action,  Doom Patrol is something of a Homecoming Week issue, as Cliff and Larry represent the original band,  Danny the Ambulance

and Flex Mentallo (and a last-page reveal) represent the Grant Morrison era, and new girl Casey is that era’s offspring. This book’s dense plotting isn’t helped by its erratic publishing schedule, but I’m looking forward to getting the next issue, and being able read the whole story in one sitting. Hal Jordan and the Green Lantern Corps completes the Homecoming hat trick: as the cover reveals, it’s yet another get-the-old-band-back-again tale. Writer Venditti’s good at setting up the fan-friendly softballs, and van Sciver knocks every one out of the 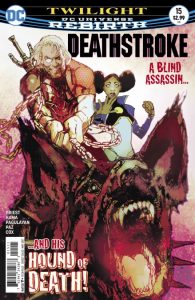 ballpark, effortlessly. Suicide Squad doesn’t hit high notes like that, but it’s got John Romita Jr. doing a Harley-battles-alone thing, and a backup Captain Boomerang story that turns into an important piece of the main story, by Williams, Eddy Barrows, Eber Ferreira and Adriano Lucas. Deathstroke continues to get by on the inventive and whip-smart Christopher Priest scripts; he’s very good at developing supporting casts for his main characters (see: Black Panther and Steel), and the group here, with various Slade Wilson family members, Alfred-surrogate Wintergreen, and now the former-Teen-Titan, S.T.A.R. Lab-tech version of Power Girl,plays to his strengths. 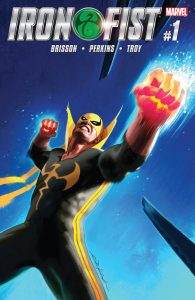 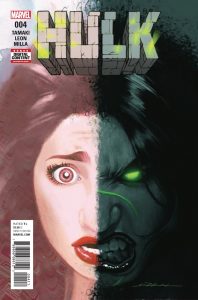 Of the Marvel books, the (inevitable, considering the Netflix series) return of Iron Fist is the only first issue. Danny, feeling disconnected from his training, is traveling 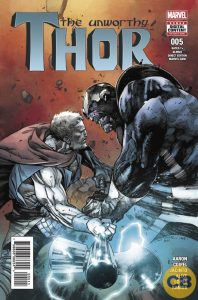 the world, trying to reconnect to his power and failing… but then a mysterious stranger appears, and it looks like one of those global martial arts tournaments full of colorful masters and kick-ass, chi-powered opponents is coming. That’s not a bad idea for a first arc, even if it does echo countless kung-fu movies (and comics, from The Badger to Dragonball), and Mike Perkins has a solid, realistic art style that looks like it can handle the various moves and tournament strategies with fluidity and power. Hulk is… well, I like the story so far, and the art’s fine, and Jennifer Walters acts recognizably like herself (although damaged), and this will probably make a great trade collection, but getting four issues into the relaunch, and still not having the supposedly-now-uncontrollable title alter ego show up 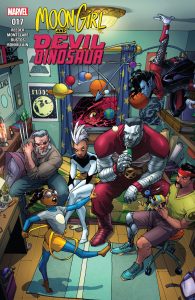 yet, can’t be helping the sales of the individual issues, can it?  Meanwhile, the Unworthy Thor mini-series concludes, with the Son of Odin and Beta Ray Bill fighting the Collector and various Thanos minions for the hammer of the Ultimate Universe Thor (and if you understood all of that, you really need to get this comic); we find out what Nick Fury whispered to make the title character feel unworthy of his own hammer (points for being unexpected, and for tying neatly into the Jane Foster Thor plot right now, but it’s one of those answers that it’s best not to think too closely on…), and we get hints of yet another hammer-wielder. All of this dovetails neatly back into the main series, and enhances it: a recipe for a successful mini-series. Moon Girl and 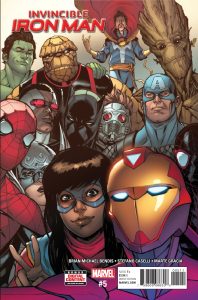 Devil Dinosaur sees Lunella meeting with the X-Men, and trying to solve a Doombot problem (the robots, who all think they’re the classic actual Doom instead of the semi-reformed current version, are irritated that she’s supposed to be smarter than their namesake). If you want a hint of the charms of this series, just check out the cover up to the left there, with the X-Men in the nine-year-old girl’s room, and her lecturing them in a pose exactly like Max in Where the Wild Things Are: if that makes you smile, then you really should be reading this comic. Invincible Iron Man has a protagonist who’s only six years older than Moon Girl‘s, as 15-year-old Riri teams up with Pepper Potts (also in an IM suit) to fight that Japanese techno-ninja woman from the previous volume of this book… and gets an offer from S.H.I.E.L.D. 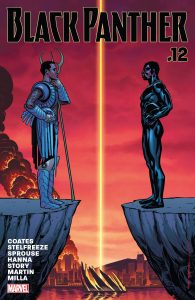 rep Sharon Carter… and, meanwhile, the AI version of Tony Stark starts to behave pretty much exactly how you’d expect a digitized version of him to — which is to say, not well. It’s a successful chapter of the larger story, and both Bendis’s characterization and Caselli’s art make Riri smart, capable and someone you’d like to know, and whose adventures you’d be interested in. Black Panther provides a coda to the Wakandan revolutionary tale that’s composed the book’s first “season,” and Coates really sticks the landing: the comic’s large cast of characters and multiple moving plot parts made it a little sketchy in the beginning, but he found his balance quickly, and the “season” makes sense, has a couple of clear and worthwhile themes, gives a number of nods to 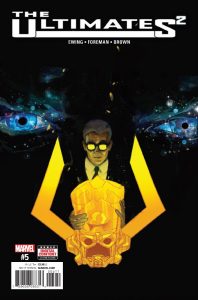 previous versions of the character, and sets T’Challa on an intriguing course for the future — especially on the last page; Coates is signed on for the book’s next season, too, and that’s good news. Ultimates 2 continues its widescreen cosmic shakeup of the Marvel universe — widescreen as in, last issue they killed all the Celestials, and turned Lifegiving Galactus into Hungry Hungry Zombie Galactus — with a series of one-on-one fights that gives each member of the cast a chance to show their stuff, and a last-page reveal of the Big Boss; if you’ve always like Jim Starlin’s Warlock/Thanos stuff, or Abnett and Lanning’s Guardians of the Galaxy and other space sagas, then get this comic. 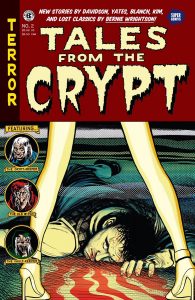 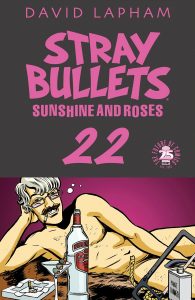 Of the indy titles, Tales From the Crypt gets first billing because it reprints two Berni Wrightson stories, EC tributes from the beginning of his career, in 1969 and 1970 — deft, if 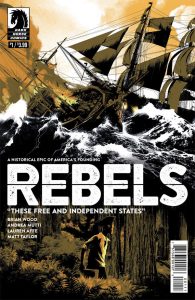 unplanned and sad, timing, considering Wrightson’s death this week, but an opportunity for fans to see him at the beginning of his career, and to note just how accomplished a horror artist he was from the start, almost fifty years ago.  Stray Bullets finally ends its own current arc — after 22 issues — with Beth, Orson, Monster and the rest of the crew shifting alliances, beating each other up, and all trying to get their hands on a couple of suitcases stuffed with money and cocaine; it’s been like a film-noir caper movie 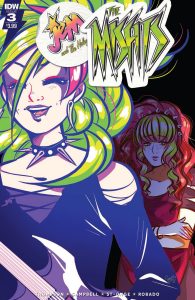 starring the Three Stooges, but with real blood, and totally worth it. Rebels continues Brian Wood’s stories of the American Revolution; in this latest series, it’s actually post-Revolution, in 1794, as the new nation struggles with problems both domestic and foreign; it’s as well-researched, and unexpectedly-poignant, as ever. Jem: The Misfits is a Jem and the Holograms spinoff mini-series about their rival group;  Kelly 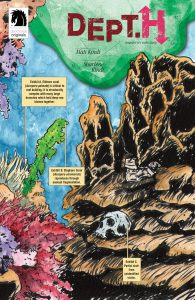 Thompson and Sophie Campbell are really good writers, capable of bringing these cartoon characters to modern life, and this issue offers a stand-alone example of the girl-group soap opera and careful storytelling that they do so well. Dept.H continues its deep-underwater drama; Matt Kindt mentions in the letters page that, when he met his now-wife Sharlene (who colors this book with delicate watercolor hues that enhance the undersea setting), he was astonished that she’d never read comics, and then realized it was because no one was making comics for readers like her, who didn’t care about superheroes: this book is for people like that. 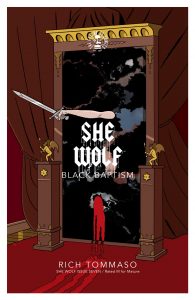 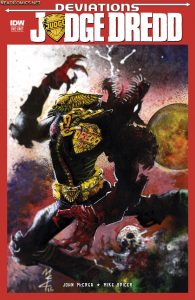 She-Wolf has turned into this big sprawly demonic-barbarian saga, delivered with lurid undergroundish broad strokes, and is a lot of sometimes-guilty fun. Judge Dredd: 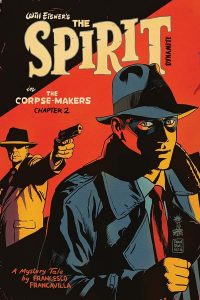 Deviations is John McCrea taking a Dredd-as-werewolf story he admired as a kid (drawn by the late Steve Dillon) and doing a What If? version of it; if you’re even half a Dredd fan, it’s worth it — and there’s a nice tribute to Dillon on the editorial pages, too. The Spirit is a Francesco Francavilla project; his career took off a couple of years ago, with Afterlife With 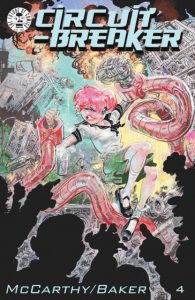 Archie, and his noir style is made for Denny Colt and Central City, where it’s always raining, and always night. Flip through this and check out the stylish splash pages and single panels, and see if you don’t like it. Circuit Breakers is the penultimate chapter of Kevin McCarthy and Kyle Baker’s valentine to 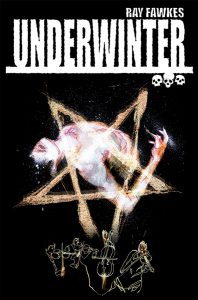 Osamo Tezuka, and it’s really late, but Baker’s fluid homages to Tezuka character types from Astro Boy on are worth it. Underwinter is a horror book about a classical music quartet who play for some decidedly unusual clients, told by Ray Fawkes in a painterly, expressionistic style somewhere between past collaborators Ben Templesmith and Jeff Lemire (who contributes the variant cover); I don’t know if this is going to go anywhere new, but it’s going there in style.

With 40 years of experience in comic reading, collecting and reviewing, English Professor Phil Mateer has an encyclopedic mind for comics. Feel free to ask Phil about storylines, characters, artists or for that matter, any comic book trivia. He will post your questions and answers on the AABC blog. His knowledge is unparalleled! He is also our warehouse manager, so if you are looking for that hard to find comic book, ask Phil!
View all posts by Phil →
This entry was posted in New Comics, Reviews and tagged Berni Wrightson, Black Panther, Circuit Breaker, Deathstroke, DeptH., Doom Patrol, Green Lantern, Hulk, Iron Fist, Iron Man, Jem, Judge Dredd, Moon Girl, Rebels, She Wolf, Stray Bullets, Suicide Squad, Superman, The Spirit, Thor, Ultimates, Underwinter. Bookmark the permalink.