Hey guys! Two weeks in a row! Don’t worry, you’ll be sick of me about halfway through this thing. 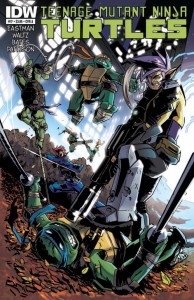 I feel like I’ve said this a bunch of times, but IDW’s reboot of the TMNT franchise is phenomenal! And as a guy with just barely too much time on his hands, I’ve been watching the 80’s cartoon, and catching up to what’s going on here. Obviously, this is going to be a bit darker and more intense (only slightly less pizza) but updating these characters to work in a modern setting has been pretty awesome. They’ve made me care about the Neutrinos for Goodness sake; that’s gotta count for something. I can still hear that nasally voice that all those pixie characters have though…

What an interesting book this is… I don’t mean that as an endorsement. It’s a lot of set-up, getting characters from Avengers Academy in with some new faces and making them fight to the death. They admit that they’re stealing from books (you choose which one), but it has a chance to be pretty intense. It’s all set in Murder World (not much of a spoiler cuz it’s on the cover) so you know who your main baddie is going to be; however, it’s hard to tell why this bad guy is acting so out of character. I’m hoping that they explain it, because the book has potential, but it’s all too up in the air right now for my taste. 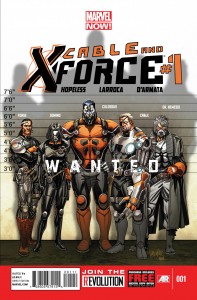 I want to like this book. It’s got a team that I can enjoy, both writing/art and actual x-members. It’s putting things in place to be pretty cool, and it’s adapting in a new way. But I just can’t quite commit to it. I can’t quite explain it, but this book doesn’t go far enough for me to have really enjoyed it. In case you didn’t notice, Hopeless has two different Marvel NOW! books starting this week and both of them don’t quite go where they need to. There’s a lot of potential here, but I’m not sure it’s actually going to get there. I keep comparing it to Uncanny X-Force and that’s not good for this book. 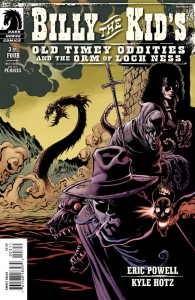 Every single Billy the Kid mini-series is just strange. It feels a lot like old Silver Age DC stories where a normal character denies everything, even with the Loch Ness Monster hovering around him! Our ‘normal’ character is Billy the Kid, who is denying everything despite hanging out with two-faced freaks and more. Powell shines as always, but there are parts of the script where he just lets Hotz draw and move the plot along on his own, and the artist absolutely kills it. This is a fun book in the style of old-timey fun books, and I love everything about it. 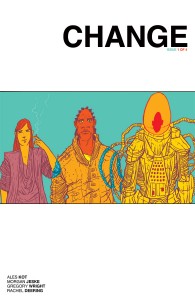 The latest new launch of an Image series is… interesting to say the least. A lot of things get moving, a man wants to make a movie where HP Lovecraft meets the hip-hop world, but doesn’t like the scripts that are coming his way. The Latest scriptwriter is too dark for his tastes, but she knows that she’s going places so she quits. Then things just go batty. I can’t quite explain what happened in this book. There’s a lot of weird things going on, and pieces moving into place, but I’m not quite sure whether or not I liked it. Worth checking out, but I think you have to be patient for it to all be put together. 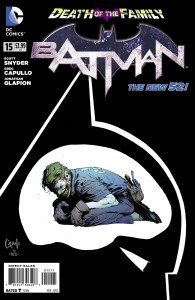 The trio of bat-books this week that all tie in to the torture from the Joker. The obvious highlight of the three is Batman, as it has been for the entire time. This issue is very exposition-heavy, but puts things in place for the future of all the titles. How much does the Joker actually know? And how much is Batman really giving him credit for? It’s an interesting dichotomy that Snyder presents, and it’s good stuff.

Batgirl is a little more straightforward, with Joker just going all out to break Barbara Gordon.

Finally, after everything, Batman and Robin sees Damian getting what’s coming to him. His cocky attitude had to reach an end point, and a full-on set-up that quite possibly destroys the kid should hopefully see some real genuine character growth.

Overall, the bat-books are thriving under this latest crossover, and it will be interesting to see where the pieces fall when all is said and done.

And after all that rambling, it’s time for some quick hits! 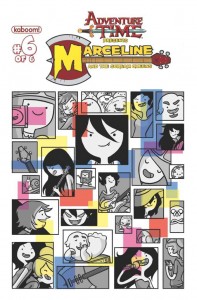 Adventure Time: Marceline and the Scream Queens #6 Writer: Meredith Gran Artist: Meredith Gran: This series wasn’t as good as the main one, but overall it was still pretty fun. A goofy mini-series that’s perfect for kids.

Before Watchmen: Rorschach #3 Writer: Brian Azzarello Artist: Lee Bermejo: I see what these Watchmen books are trying to do, and I don’t think it’s quite working. Still, it’s a very pretty series with potential depending on what reveals we get in the last upcoming issues.

Iron Man #4 Writer: Kieron Gillen Artist: Greg Land: Good lord, there’s already four issues of this. That’s absolutely ridiculous. I hope Gillen can tie up his many plot lines into one coherent thought, cuz if not, this book is going to be rough.

Fantastic Four #2 Writer: Matt Fraction Artist: Mark Bagley: It took two issues to finally stop with exposition, but I’m excited to see how this and FF can pair together and quite possibly make the franchise readable again.

Before Watchmen Dr. Manhattan #3 Writer: J. Michael Straczynski Artist: Adam Hughes: The prettiest piece of mediocrity on the shelves. Just not a good story, and the artist deserves better.

Bloodshot #6 Writer: Duane Swierczynski Artist: Manuel Garcia: Another great issue from what has turned out to be a shockingly good Valiant reboot. Fun stuff all around, and worth a look if you haven’t seen it.

And that’s the week! The next two weeks we’ll see nothing but Phil reviewing, so enjoy that!