The Latest and (Mostly) Greatest #95 by Dan!

All right folks, it’s a lighter week so we won’t have a lot to talk about. But there’s still plenty of great stuff out there, so let’s do this! 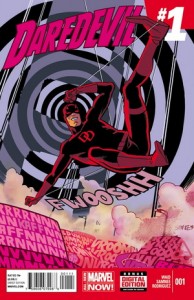 Waid and Samnee ended their seminal run on Daredevil by revealing his identity and moving him to California. So now Waid and Samnee are back with an all-new location a possibly new set of characters and a lot of space to just roam. And roam they do. This issue acts as set-up (including a quick origin that is presented beautifully), Daredevil manages to save a kid with a bomb inside her and build up a reputation with the police. So far, things seem so good for Matt Murdock in California, but we all know it’s just a matter of time until something crazy is going to happen. Waid and Samnee present, easily, one of the best issues of the year of any title, and it’s easy to see why this is consistently one of the best comic books on the stands. 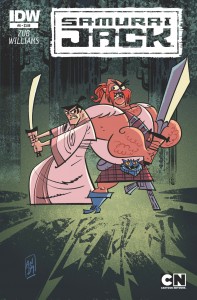 I remember only kind of enjoying the Samurai Jack cartoon when I was a kid. Sometimes kids TV shows get bogged down in weird continuity, and when you’re a kid, you just end up staring with your jaw open confused (I’m lookin’ at you Disney’s Gargoyles). Jack was at it’s best when they introduced him to strange characters and mixed their identities with the new environments. One of the characters I remember most was the Scotsman. He was insane and loud and crazy. It’s hard to transfer that idea to the page, but Williams does it with ease. It’s a fun, goofy issue that includes some strange gender-swapping ideas straight out of a Silver Age Superman comic. It’s really fun stuff.

Sex Criminals is not the kind of thing that I can associate with my childhood, and with good reason. This is a comic that is absolutely perverse, and prides itself on running directly toward the horniest, dirtiest and most ridiculous things possible. Two people are …ahem…banging to get into a special world where they can rob a bank to save a library. That’s the fastest way I can explain this, but it doesn’t even get into the real intricacies behind the plot. In just five issues, Fraction has given his characters distinct voices, and Zdrasky has effortlessly put them into a world where they all have their own looks and distinct styles. It’s one of the best books to read from the stands, but only if you’re over 18 years old. It’s pretty obvious why on every page. 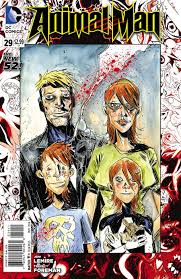 Lemire’s last issue on the title ends up being the last issue of the series (I think), and the only proper word to describe it is ‘cute’. After all the death and destruction brought on by the Red against Buddy and his family, it’s nice to have this issue put the pieces that are left back together. The obvious selling point is the Lemire art. Part way through, Buddy’s daughter does a fairytale run through of everything that came before, and the innocence of a child surrounded by the weird crap of modern comic books. It’s great stuff and a fitting end to a solid run on a modern book. 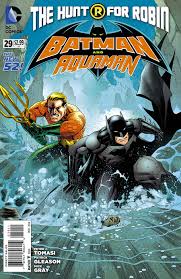 Batman and Aquaman #29 Writer: Pete Tomasi Artist: Patrick Gleason: Ever wanted to see Aquaman attack somebody with a whale? Cuz’ I didn’t know that I did, but now I never want to see anything else ever again.

Iron Man #23 Writer: Kieron Gillen Artist: Luke Ross: In the process of tracking down Mandarin’s ring, Tony has to fight a bunch of elves. This story has the potential to be bizarre or awesome. I expect it to be both.

Uncanny X-Men #19 Writer: Brian Michael Bendis Artist: Chris Bachalo: Lots of talking cause it’s a Bendis comic, but some plot moves around and Bachalo’s art is as pretty as it normally is. 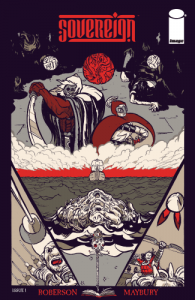 Sovereign #1 Writer: Chris Roberson Artist: Paul Maybury: A strange universe-spanning mini-series that I couldn’t take my eyes off of. Watch out for this book… there’s a chance it’s going to be really good!

Seekers of the Weird #3 Writer: Brandon Seifert Artist: Filipe Andrade: This book keeps moving along with mysterious room after mysterious room. It’s still a lot of fun to read with each passing issue.

Adventure Time #26 Writer: Ryan North Artist: Jim Rugg: What can I say about the greatest kid’s comic in years? Nothing more than that I would guess. 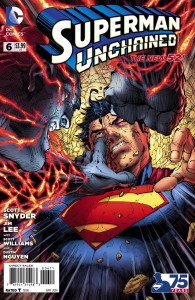 Superman Unchained #6 Writer: Scott Snyder Artist: Jim Lee: You wanna see Superman bump into things and barely move a plot along? Then this is the book for you.

New Avengers #15 Writer: Jonathan Hickman Artist: Simone Bianchi: The best part about this issue was the end. Because knowing that Bianchi isn’t the artist in the next issue should make it readable.

TMNT: Utrom Empire #3 Writer: Paul Allor Artist: Andy Kuhn: These tie-ins to the main Teenage Mutant Ninja Turtles book have been great. This one is no exception. Great stuff.

And that’s the week! Go buy comics; it’s what cool kids do!