This title, about a group of dogs and cats who fight supernatural menaces to their small town, doesn’t come out very often — once or twice a year if we’re lucky — but it’s always worth the wait, and always ends up on the top of my list. Dorkin is mostly known for his humor (Bill and Ted, back in the day, and Milk and Cheese and Dork, plus the about-to-be released Eltingville Club, a savage-but-loving takedown of comics fans which no one who’s ever been one, or spent time in a comic shop, can afford to miss), but he’s a very good horror writer and plotter, too, and Thompson’s art, with its lovingly-detailed, realistic animals, continues to be amazing. Best of all, every issue is a stand-alone story (although there’s an overall arc to the plot, too), so readers won’t be left hanging; there’s really no excuse not to buy this comic.

Stray Bullets was one of the best indy titles of the ’90s (it started in ’95), a take-no-prisoners, hard-boiled crime book that jumped around in time and had a huge, rotating cast of characters — some innocent, some dirty, and some in-between, but all of them fascinating and fun (and sometime horrifying) to read about and watch. There hasn’t been a new 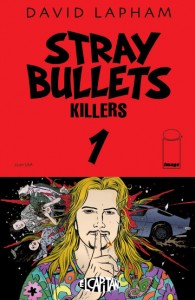 issue since #40, which came out some time in the mid-2000s; #41 here ends that 8-year-old cliffhanger and puts the original volume to bed, while Killers starts a new volume, but with the same well-conceived mix of blood, babes, kids and criss-crossing motivations. The whole package, particularly the ending, would be right at home in a Coen brothers movie, and shows that Lapham hasn’t lost a step; if anything, he’s gained in his ability to startle, rattle and thrill his audience.

As the first page reminds us, back in issue #6, Clint watched a cartoon on TV with his houseguests; this issue is that cartoon, drawn by Eliopoulos in his bigfoot, kid-friendly style. It turns out to be a winter special about a multi-faithed group of superhero animals, with some pointed lessons that could apply to a certain loner archer who, the last time we saw him a few weeks ago in “real” time, was bleeding out on the floor. The resolution to that problem will apparently have to wait a few issues — but Aja fans at least get a two-page fix of his art here, and the rest is so inventive and fun that it’s hard to complain.

If you’re missing an Aja-like Hawkeye (complete with a couple of facial Band-aids), you could do worse than this relaunch — Walsh does a pretty good version: clean line, mostly-three-tier panel layout variations and all, with some of his own mannerisms thrown in, too. Kot includes the Black Widow and Spider-Woman, along with Nick Fury, Agent Coulson and some others; the dialogue is snappy, the action is crisp, and this should get an award for most-surprisingly-good-book-of-the-week. It’s nice to see creators, both writers and artists, taking cues from books like Daredevil and Hawkeye; we can’t have too many smart, energetic, non-depressing, fan-friendly superhero comics. 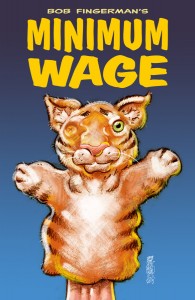 This is another well-regarded ’90s series that’s undergoing a revival, although it’s nothing like the noir pyrotechnics of Stray Bullets; instead, it’s a semi-autobiographical strip about a newly-divorced NYC cartoonist re-entering the dating scene. Fingerman, in an interview, called the original series a precurser of the kind of “cringe comedy” that TV series like Louie C.K. and Girls specialize in today, and it certainly shares the Big Apple location and offbeat, embarrassment-connected humor of that genre (although I’m a little unsure of the time period — the TVs and computers are boxy, and the references feel more turn-of-the-century than contemporary; I suppose that would make sense, since only a couple of years have passed for the characters, while the original book stopped almost 15 years ago). In any case, Fingerman’s busy, detail-oriented art and gift for caricature continue to be as wonderful as ever; his ever-expanding cast of New Yorker archetypes and weirdos is a wonder to behold. 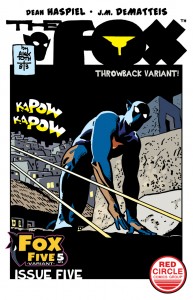 This is more like a coda to the previous four-issue story than a proper conclusion, and DeMatteis is a step down from the previous Mark Waid (why, yes, of course there’s a New Age-y, let’s-all-work-together-and-touch-the-Infinite plot resolution) — but the Haspiel art is still worth a look and I continue to love the title character’s striking, minimalistic-but-pliable costume design. Get the Alex Toth alternate cover, and this’ll be worth the $2.99 cover price by itself. 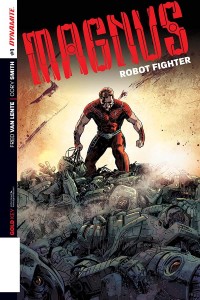 I’m mentioning this because it’s a new launch of the character, from Dynamite this time (they’re also beginning Turok, Solar and Dr. Spektor), although since that makes something like… four?… incarnations of the title since the ’90s, the excitement level is a little low. Fortunately, it’s pretty good: it starts out looking like a very different version, and then twists around and redeems itself.  Smith could use a little seasoning, but delivers when necessary: he nails a couple of big-city money shots, and otherwise doesn’t get in the way of the story. 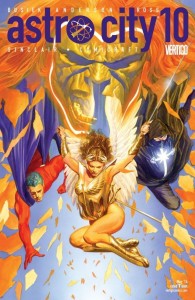 The conclusion of a three-issue story looking more into the life and powers of Winged Victory, the Wonder Woman avatar. As always from this team, it’s satisfying, straight-down-the-middle superhero stuff written and illustrated with care and charm, and a refreshing attention to the nuts and bolts of good storytelling. 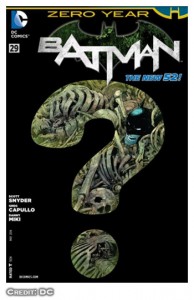 Well… this is kind of fun: in with all the regular “Zero Year” fight-the-monster and watch-the-Riddler-run-rings-around-everybody stuff, Snyder and Capullo have decided to insert a couple of Frank Miller tribute/callbacks, including an “it’s the g*******d Batman” quote and a splash that echoes the cover to The Dark Knight Returns #1. See how many others you can find: cleverness plus craftsmanship plus fanboy references equals no surprise that this is the current best-selling comic. 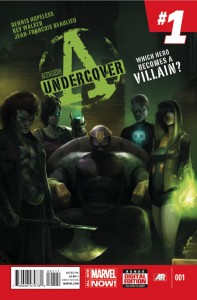 For fans of Avengers Arena: It’s the same book, by the same creative team, only now the super-powered kids are all dealing with the PTSD aftermath of their little Arcade-instigated Hunger Games ordeal, and the fact that most of the world has seen it on  the Marvel-Universe equivalent of YouTube. Keep reading if you liked it before; if not, this is still a good time to dip in and see if you’ll like it now.

DeConnick’s been having a good year: her fairy-tale Western Pretty Deadly has been a critical hit, letting her stretch her storytelling muscles in ways that regular superhero books didn’t allow — but, now that’s she’s helping to launch a new volume of Carol Danvers’s adventures (which is more like a continuation of the previous one, since she wrote that too), those skills have deepened and broadened, and they make this a better comic. It’s going the Iron Man route, having Carol go into space as Earth liaison with the Guardians of the Galaxy for a year; Lopez, who has a clean, attractive style that somehow reminds me of Peter Gross, seems like a smart choice to deliver good-looking aliens and people both, giving this book at least a fighting chance to find a niche. 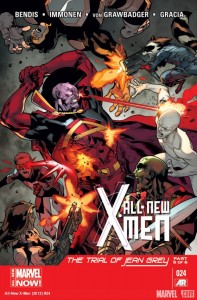 The penultimate chapter of the trial-of-Jean-Grey crossover with Guardians of the Galaxy (yes, they get around quite a bit; you’d think they had a movie coming out…), wherein the Shi’ar have kidnapped teen Jean to answer for the crimes of her now-dead grownup self, and, really, that’s all I have to say about it. 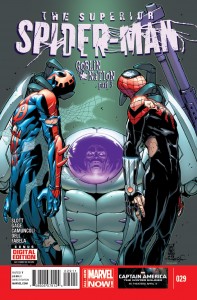 Same here — like All-New X-Men, this book comes out every couple of weeks, and I’ve already talked about why I like it enough to buy it in previous posts, so there’s no point belaboring it; prior reviews going back seven years are in the archives, though, so you can review a lot of recent comics history there if you’re bored….

With 40 years of experience in comic reading, collecting and reviewing, English Professor Phil Mateer has an encyclopedic mind for comics. Feel free to ask Phil about storylines, characters, artists or for that matter, any comic book trivia. He will post your questions and answers on the AABC blog. His knowledge is unparalleled! He is also our warehouse manager, so if you are looking for that hard to find comic book, ask Phil!
View all posts by Phil →
This entry was posted in New Comics, Reviews and tagged Astro City, Batman, Beasts of Burden, Captain Marvel, Hawkeye, Magnus, Minimum Wage, Secret Avengers, Stray Bullets, The Fox. Bookmark the permalink.