The Latest and (Mostly) Greatest #84 by Dan!

And we’re back! Just one more week left of 3-D covers, and I’ll be here to cover them all. But first, let’s hit all the important other stuff of the week. Let’s do this! 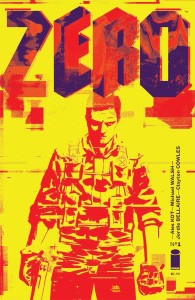 This is such a good comic, even Eddie read it and enjoyed it (cue audience gasp)! A special op agent is out in the field looking to collect some data while two super-soldiers fight to the death around him. This issue acts as the pilot to the series, and it is pretty darn fantastic. The art style is that minimalistic style you see from David Aja or Michael Lark, and it works perfectly for this book. The violence and action are all there, and it has a pretty solid twist (with a helpful piece of set-up narration) that makes this series immediately worth reading. There’s a lot of potential here, and it’s a great first issue. 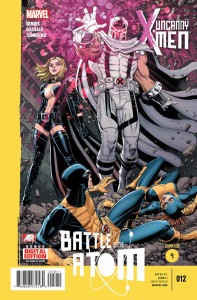 If I had known that this series was going to just be a series of talking about thinking about making decisions, I would have just stayed away. That’s all this really is. People make slight moves every issue, but they spend all their time talking about it. The biggest travesty of all is the waste of art talents. You begin with a solid Art Adams cover showing something that never happens, then you get inside and Bachalo, who is styled to do crazy action and fights, and you have him draw people standing around discussing their motivation. So far, this ‘Battle of the Atom’ storyline is a waste. 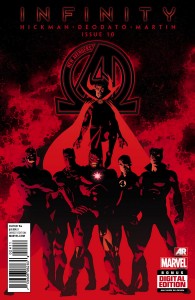 As opposed to Battle of the Atom, ‘Infinity’ is using almost every page of its issues and tie-ins effectively. I read these out of order (NA should be before the main title) and that actually made a HUGE difference. NA gave an explanation for Black Bolt’s actions and the grand plan in place, so it actually mattered. Thunderbolts also worked well as a tie-in. Basically, with all the heroes gone or out in space, the T-Bolts are one of the few teams still around to be anywhere near Thanos. It’s fun. The main title is still crazy, with tons of plot points working together to hopefully lead to a solid conclusion. I trust Hickman to pull it off, and three issues in, it’s been a lot of fun. 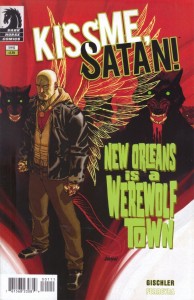 So the artist from that insane story Colder teams up with the dude who wrote X-Men when it was all vampire heavy and what do you get? Well, the main character is a fallen angel looking to convince God to let him back into Heaven. To do that, he has to do good. This case of doing good is saving a bunch of witches from a cult of Mafia-like Werewolves. How can I put this… It’s Awesome! Like, for real. Conceptually it’s completely ridiculous, but it just works so well when it’s played completely straight. Ferreyra is the main draw here, as his art style is just absolutely beautiful. Very great first issue. 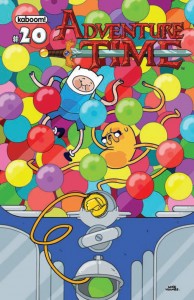 Adventure Time #20 Writer: Ryan North Artists: Shelli Paroline & Braden Lamb:  As opposed to the ‘Choose your Own Adventure’ issue, this is a ‘watch your own adventure’ issue. The peak is reading the pages of the ‘Adventure Tome’ with all its inside jokes. A lot of fun.

Daredevil #31 Writer: Mark Waid Artist: Chris Samnee: This issue was a fine and normal Daredevil issue, with a piece of topical news involved, but then Waid threw in a last page twist that absolutely floored me. I have NO clue what’s coming next, but I can’t wait to read it. 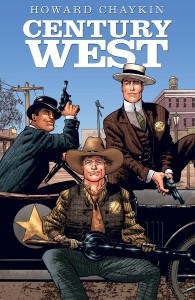 lot of fun, and adding in Spidey 2099 has just made it even crazier. Fun stuff.

Century West Writer/Artist: Howard Chaykin: There’s not a lot that needs to be said about a giant book written and drawn by Howard Chaykin. If you like Chaykin, you’ll enjoy this. It’s a bunch of lawmen fighting the changing times. It’s very enjoyable and fun, but really only if you like Howard Chaykin.

Buzzkill #1 Writer: Donny Cates Artist: Mark Reznicek: A superhero who can only get powers when he’s drunk; has to go to rehab cuz’ he can’t remember what he did, and nothing is as it seems. An interesting debut to a new mini-series. OK, but may be worth watching for.

All right! Only 14 more comics to go! Let’s rally through these Villains tie-ins, shall we? 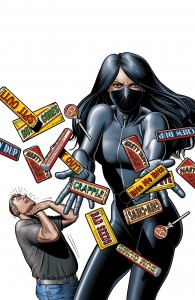 Justice League #23.3: Dial E Writer: China Mieville Artists: So many, a bunch of indie artists and popular DC artists. For if You’re reading: Dial H, but none of you were. Just me. That’s why it got cancelled.:  I love everything about this issue. It’s everything I want in a Dial H issue, and it’s just an insane amount of fun. Each page is a different artist and it’s the bat-@#$% insanity I’ve come to expect. Loved it.

The Flash #23.3: The Rogues: Writer: Brian Buccellato Artist: Patrick Zircher. For if You’re reading: The Flash, Forever Evil, Rogues Rebellion: The Flash issue of Forever Evil have worked well cause they’re all written by the current writer of the Flash. This issue, focused on the current state of the Rogues, also sets up the next mini-series. It’s fun stuff. 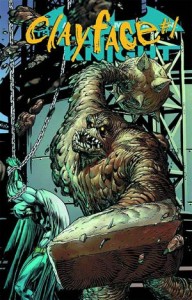 Batman: The Dark Knight #23.3: Clayface: Writer: John Layman Artist: Cliff Richards.  For if you’re reading: Detective Comics: Apparently the Secret Society did not come calling for a brute like Clayface, so he tried to take things into his own hands. What follows is a goofy mission that obviously goes awry, but it’s very well made.

Swamp Thing #23.1: Arcane: Writer: Charles Soule Artist: Jesus Saiz. For if You’re Reading: Swamp Thing: This one wins for having the best 3-D cover, and the story itself is fine. Apparently the Rot is coming back (I would guess it never really dies), and this sets up what could be the future for this character and Swamp Thing. 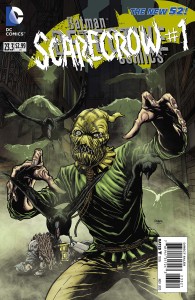 Detective Comics #23.3: Scarecrow: Writer: Peter Tomasi Artist: Szymon Kudranski. For if You’re Reading: Arkham War, Batman and Robin.: I liked this issue a lot more than I should have. Scarecrow is just recruiting people, but not everything is working out in Arkham. It’s set-up for another mini, but it puts the pieces in place well.

Green Lantern #23.3: Black Hand: Writer: Charles Soule Artist: Alberto Ponticelli. For if You’re Reading: Green Lantern titles, possibly Red Lanterns specifically: We’re in the middle of the books that are just average, and this is no exception. Black Hand’s back, doesn’t remember who he is, but then he figures it out. Worth looking at for Ponticelli’s eccentric art. 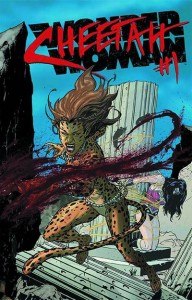 Action Comics #23.3: Lex Luthor: Writer: Charles Soule Artist: Reymund Bermudez. For if you’re Reading: Forever Evil.: This just in, Lex Luthor is an evil dude. This works as a mini-prequel to Forever Evil, but doesn’t add much of anything.

Teen Titans #23.2: Deathstroke:  Writer: Corey May and Dooma Wedschuh Artist: Moritat, Angel Unzueta & Robson Rocha. For if you’re reading: Teen Titans and possibly Forever Evil.: This is a weird story all about Deathstroke becoming while working with Deathblow? It doesn’t make a whole lot of sense, and the mixture of multiple writers/artists makes it even worse. 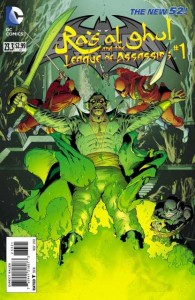 Batman and Robin #23.3: Ra’s al Ghul and the League of Assassins: Writer: James Tynion IV Artist: Jeremy Haun. For if You’re Reading: Red Hood and the Outlaws:  I wanted to like this, then it said I had to read Red Hood, and I just didn’t care anymore. Ra’s doesn’t want to join the Secret Society, and it makes perfect sense why. Fun stuff until a bad payoff.

Justice League Dark #23.2: Eclipso Writer: Dan Didio Artist: Billy Tan. For if You’re Reading: Maybe Phantom Stranger or Pandora? Maybe?: This is like a book built for me to hate. It has no point, it’s written poorly, it’s ugly and violent for no reason, and it just makes a classic silver age character ‘grim n gritty.’ Just no real point. Avert your eyes!

Justice League of America #7.3: Shadow Thief: Writer: Tom DeFalco Artist: Shadow Thief. For if You’re Reading: I can firmly say I have no idea. Hawkman was cancelled, so maybe some Justice League title after Forever evil? No idea:  This one gets the bottom ranking just cause I don’t know what in the world is going on. Shadow Thief is a HERO in this book that’s supposed to be tied in to Villain’s month. Do you see the problem here? It’s confusing and ties in to absolutely nothing else. Essentially meaningless and forgettable.

And that’s the week! I’ll see you guys again in a couple weeks where hopefully I will write about half as many words as I have these past few reviews.