The Latest and (Mostly) Greatest #60 by Dan!

This book is without a doubt the best of the week. We’re in this weird transition stage, and this is the week where four main Marvel titles come to their end. While other titles reestablish the status quo (more on that later), this issue takes a different approach. It’s upsetting and depressing because it’s embracing the idea that things change. It sounds stereotypical when I say it like this, but the issue shows that everything goes on regardless of if some things end. Hickman concludes the story arc about the kids, Valeria and Franklin, and the future version of themselves. There’s moments in here that are so simple and so elegant, and it just totally caught me off guard. It made me want to re-read the entire Hickman run, but it also depressed the hell out of me. Mission accomplished? Fantastic. 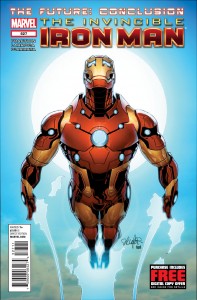 These titles ending are much more about resetting the status quo back to where it was. Marvel has movies to sell people! These two books are of the same quality but for exactly opposite reasons. Iron Man has been running with Fraction/Larroca at the helm for such a long time that it seemed like they were just putting the pieces back in the toy box. It was good stuff, but just generic. The same goes for Hulk. Hulk started off absolutely awful (I’m looking at you Marc Silvestri), but then that “Stay Angry” story was pretty fantastic. Aaron’s story revolved around splitting up the angry Hulk and the angry Bruce Banner, but Aaron also made Banner a complete psychopath. He had to reset everything for the reboot. These were both good, but they were exactly what you expect when you hear that a big title is ending. Definitely not FF quality.

This finale was pretty perfect, as it worked as a subdued epilogue to the entire story. Bringing back Epting, who Brubaker started his entire run with, was a fantastic choice, and harkened back to the very beginning of their run all those years ago. Brubaker talks in the back about how he has written over 100 issues, and it makes me think that maybe all these conclusions make sense. It’s time for Marvel to get some new pieces moving around. I’m going to miss some of these books, but maybe I’ll finally have something new to say aside from “Captain America and Iron Man are really good!” every single week. Also, I didn’t read Journey Into Mystery, it’s not my cup of tea, but a lot of people seemed to love it, and that story ended this week too. 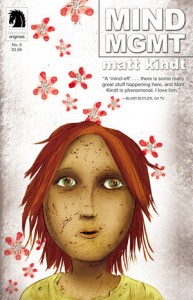 This is without a doubt the best book of the year, and this is the conclusion of “Book one.” How very indie of Matt Kindt to call it “book one.” That doesn’t change the fact that we actually do reach the end of a story arc, kinda. Kindt was able to answer a fair amount of questions, but still create even more hanging threads and ideas. One thing that absolutely can’t be ignored is that Kindt is using WATERCOLOR. Just think about that for a second. You remember those paints you used when you were 6? That’s what he’s using to make one of the most beautiful projects on the stands right now. I’m ready to connect all the back covers of fake ads and re-read all the blue lines, but in the meantime, my mind is completely blown overall. Great, great stuff. 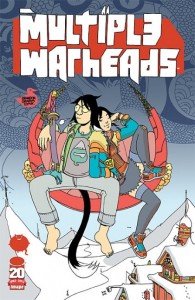 Graham is such an acquired taste that I’m still not even sure I like him. I’ve read King City, and the concept is so great, the execution works on almost every level, and you have to get used to the art style, but it’s so good. So I tried out Multiple Warheads, and I think I have to “tradewait” Graham. I just could not get my head around this issue. It was just as good quality-wise as I expected it to be, with striking visual and high concepts galore, but I just felt like I was missing something. I just couldn’t quite process the plot, and I’m not sure I want to wait each month to try to figure it all out. I’ll see you again in trade Brandon Graham! I promise I don’t hate your stuff; I actually like it a lot, but I, apparently, am too slow to handle it in pieces. 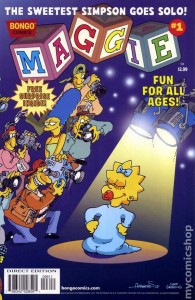 Now this is a comic I can really grasp! (I’m kidding folks…) ANYway, this one shot is worth noting because of three different Sergio Aragones stories and a couple games that he’s put together. Aragones paired with the Simpsons franchise has been an interesting and pretty successful experiment. He’s able to write and draw some stories that fit right in the vein of the Simpsons, but still have his overall quality that you’d expect. There’s a “find pacifiers for Maggie” page that has so much going on your brain might explode! Overall, it’s just a fun doofy one-shot that stays right in the vein of traditional Simpsons fun.

Boy oh boy these writers love the sound of their own voice! I feel like they’re trying to hammer in all the plot to get it out of the way. But then what was the point of the entire “0” issue? We’re still setting things up and putting things in place, and we’re technically two issues in already. I’m bored. I won’t even lie, I don’t really have anything else to say about it. March’s art is as pretty as it’s every going to be, and when there’s an actual fight (ya know, that they talk over in that expository way they do). The visuals are fantastic, but man I just don’t care. 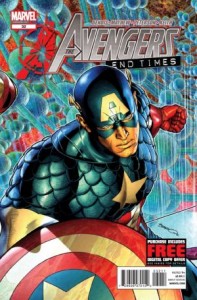 A-Babies Vs. X-Babies #1 Writer: Skotties Young Artist: Gurihuru: A lot of cheap doofy jokes that sometimes work, but I would have much rather read this as a Chris Giarrusso mini-Marvels book. 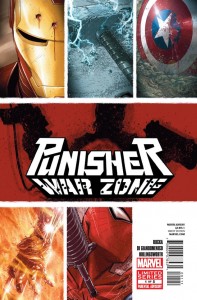 Punisher War Zone #1 Writer: Greg Rucka Artist: Carmine Di Giandomenico: They’re forcing Rucka to close out his Punisher run with this mini-series and that’s a damn shame. This is just as good as the run has been.

Batman: The Dark Knight #13 Writer: Gregg Hurwitz Artist: David Finch: Yeah, this is just terrible, you should really stop reading it. So should I.

And that’s the week! I’ll see you kids again soon!