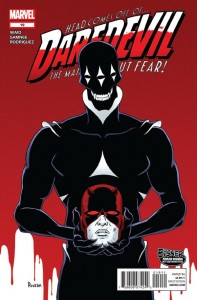 who know how to create subtle, intriguing characters and slambang action plots, and artists who know how to break that action into fast-moving panels with crystal-clear composition and sharp, smooth lines. Special call-outs to the colorists of each book, too, who know just how to highlight, and when to be subdued, and whose palettes enhance the art considerably. Eliopoulos is probably the best letterer in comics right now, too, so Hawkeye has a truly all-star team, and just edges Daredevil for book of the week. 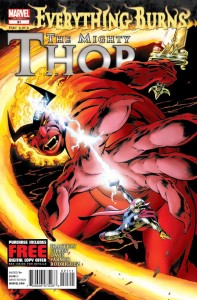 This finishes “Everything Burns,” the six-part crossover between this book and Journey Into Mystery, and does it in fine style: Giandomenico has a Neal Adamsish way with expressive faces that reminds me of Allan Davis (and Mark Farmer’s inks help with it, too), and he’s also very good at all the full-page action splashes that a climax like this, with lots of towering demons and swords and returning gods and energy discharges and dodging and punching, needs to deliver a suitable impact. Mission accomplished, and it’s nice to see Kid Loki end up… well, not quite on top, but at least still around, and still juggling all of his well-intentioned schemes (see this week’s Marvel Now!: Point One to see where he ends up next). 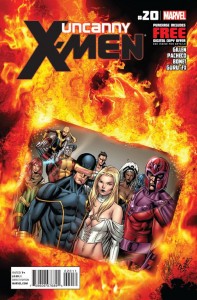 Both of these books are written by Gillen, so both involve very smooth writing, and more focus on strong characterization and dialogue than action — and both involve the aftermath of the AVX mega-event. Uncanny is the last issue of the current series, too, so a lot of time is 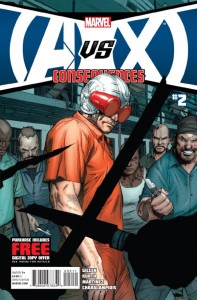 spent tidying up various subplots and dangling threads, with a couple of last-minute twists and reveals thrown in to keep the next creative team on their toes. Consequences suffers because Gillen has been dealt a crappy hand: Cyclops in jail, in a situation so contrived and, well, stupid that it was clearly a decision by committee (remember the Civil Wars tie-in involving the exact same plot: Robbie Baldwin in jail, turning from the happy-go-lucky, confident Speedball into the dour, self-punishing Penance? Remember how illogical, character-destroying and just plain dumb it was? Well, here you go…). Skip this one if you’re on a budget: six months to a year of Cyke in a bug-eyed inhibiter helmet, moping around in jail before his inevitable redemption, is unlikely to offer much reward. 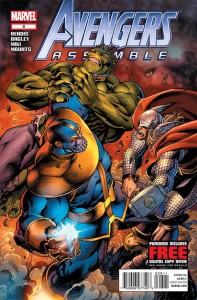 Bendis continues to wrap up his Avengers work: Assemble finishes an eight-part Thanos/Guardians of the Galaxy story, and is notable for its hints about how he’ll be handling the GotG characters when their own book begins in a month or two; Mark Bagley continues to be this generation’s Dick Dillin: a smooth professional, able to handle dozens of superhero characters with grace and 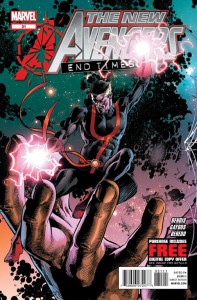 style. New Avengers begins a new plot involving someone, or something, possessing various members of the team in turn (old-time fan that I am, I’m guessing it’s the Space Phantom, in a callback to the second Avengers story ever told); Gaydos’s sketchy, more-indy style makes the book look a lot like Bendis’s earlier Alias, which is fine by me — since, as always, it’s the small asides and interactions between the characters that make this book work, and that style’s so good at highlighting them. However, points off for having a cover that has nothing whatsoever to do with any actual scene in the comic. 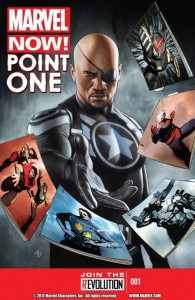 This is a promo book for Marvel’s new lineup, offering 48 pages of previews of six titles: the Matt Fraction/Michael Allred FF #1 and the Kieron Gillen/Jamie McKelvie Young Avengers #1 look like the best creative teams, with the Bendis/Steve McNiven Guardians of the Galaxy close behind, and the Jeph Loeb and Ed McGuinness Nova being surprising in that it, at least in the preview, doesn’t suck, and seems like a fun callback to the ’70s series. There’s also the Nick Spencer/Luke Ross Secret Avengers #1, starring the newly-Samuel L. Jacksonized Marvel Nick Fury, and Cable and X-Force #1 by Dennis Hopeless and Gabrial Hernandez Walta. All well and good, but one has to ask: if this is meant to generate interest in all of those titles, why does it have a cover price of $5.99? That’s a dumb move, and manages to dissipate most of the good buzz generated by some admittedly-cool-looking new books. 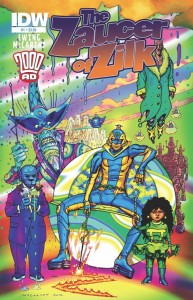 McCarthy is the 2000 AD artist best known in the US for his Spider-Man: Fever mini-series of a few years ago, a hallucinatory, very Ditko/Dr. Strange-influenced book with wild colors and a wilder plot. So too here, in a tale about a bored teenager in a boring town who eats a magical piece of candy and finds that he’s actually the title character, a sorcerer in a groovy psychedelic dimension who fights against the forces of dullness and drabness. Like a lot of British mystical stuff, this is always threatening to veer into tweeness, but McCarthy and Ewing put enough fizz into both the art and characters to keep pulling it back from the brink. As a two-issue series, it won’t be around long enough to wear out its welcome, and there’s definitely nothing else as Day-Glo-colored and ’60s-streamlined as this on the stands. 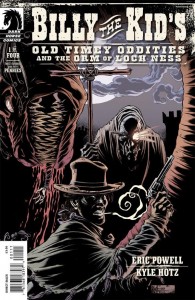 Powell’s output tends toward the manic-depressive: you don’t see The Goon on the stands for months at a time, and then suddenly it’s there, bing bing bing, three issues in a row, along with assorted mini-series and other output like this old-Western/Gothic/horror mashup. Billy is in the British Isles (having encountered Jack the Ripper in his previous mini-series), and now is traveling to Loch Ness, where both expected and unexpected horror icons await. If Powell can’t draw this himself, Hotz is the next best thing: their styles stem from the same EC roots, all shadowy inking and lovingly-detailed grotesques, making this a perfect Hallowe’en read. 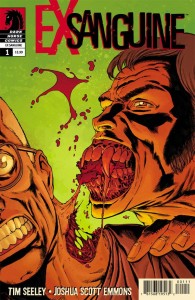 Another Hallowe’en horror read — and, to judge by the cover, a vampire story in the 30 Days of Night vein (heh…), although the book itself mixes in other mystical and serial-killer elements, too. I’m not a big fan of these myself, but if you like this kind of thing, Seeley does it well. 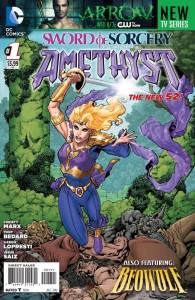 The actual title is Sword of Sorcery Featuring Amethyst, presumably so that if the character doesn’t take hold they can try with similar mothworn properties from the DC vaults. The original S of S was a Bronze Age title featuring Fritz Leiber’s Fafhrd and the Grey Mouser characters, and only lasted five issues but had art from Howard Chaykin, Berni Wrightson, Neal Adams, Walt Simonson and Michael Kaluta during its run; Lopresti isn’t up there, but he does a decent enough job with the more female-oriented fantasy elements in this book, and Marx is good at taking the best of the original Amethyst run and explaining its mystical-jewel-themed world to readers. There was a “0” issue before this one, but there’s still a load of infodump here; we’ll have to wait another issue or two to see how the story shakes out, and whether it’ll be compelling enough to last. 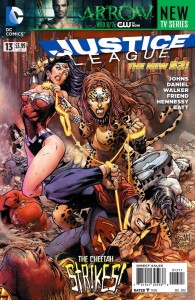 Is it just me, or has this book, while still a top seller, gotten boring lately? I’m finding it hard to remember anything after the first six-issue “getting the band together” arc, and this issue’s Wonder Woman/Cheetah focus doesn’t help much; even the “shocking” last panel has little impact, since we all know it’s going to be fixed next month. It’s not the art — Daniel has about the same style as Lee — but the story just seems… not relevant, somehow, unmoored in time and just spinning its wheels; it seems more interested in setting up the new Justice League of America companion book than anything else. Better ramp it up soon, guys; in today’s market, apathy can be deadly, even for a top-selling title like this one. 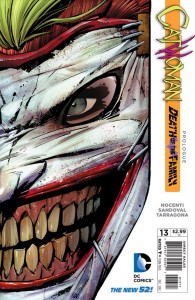 This has already sold out, but don’t pay big bucks for a first-printing replacement; despite the cover tie-in with the big Bat/Joker crossover story, not much of that makes its way into this issue: a shadow figure, an unresolved chase, and then it’s back to the regular plot until next time. Nocenti and Sandoval deliver a decent-enough Catwoman, but nothing that won’t wait for the inevitable second printing. 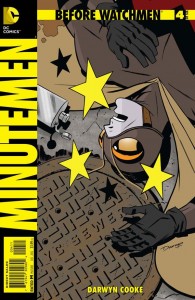 This has been the only “Before Watchman” book that I’ve had any interest in, just because of Cooke’s pedigree, but the plot’s been depressing, the theme’s been heavy-handed, and with only two issues to go it’s going to have to turn around quickly to have been worth the trouble and expense. As a sales ploy, these books have been a success, but none of them will be remembered ten years from now, and the quality of the work produced just doesn’t justify the ethical bankruptcy of the project. Sorry, DC: Alan Moore won this one. Again.

With 40 years of experience in comic reading, collecting and reviewing, English Professor Phil Mateer has an encyclopedic mind for comics. Feel free to ask Phil about storylines, characters, artists or for that matter, any comic book trivia. He will post your questions and answers on the AABC blog. His knowledge is unparalleled! He is also our warehouse manager, so if you are looking for that hard to find comic book, ask Phil!
View all posts by Phil →
This entry was posted in New Comics, News and Events, Reviews and tagged Amethyst, Avengers, Billy the Kid, Catwoman, Daredevil, Ex Sanguine, Hawkeye, Justice League, Marvel Now, Minutemen, Thor, X-men, Zaucer of Zilk. Bookmark the permalink.