As part of their 80th-anniversary celebration this year, Marvel’s been reprinting a lot of their stuff, in a number of different forms. Defenders: Marvel Feature #1 Facsimile Edition is the simplest: a full reprint of the 1971 original, down to the ads and back cover, with only the 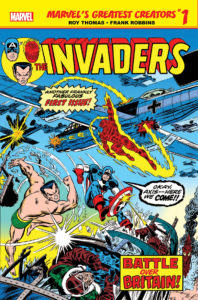 cover price (from 25 cents to $4.99) and the indicia at the bottom of page one changed. Roy Thomas and Ross Andru bring the early-’70s Marvel magic as the Hulk, Doctor Strange and the Sub-Mariner team up, with the added attraction of watching inker Bill Everett, Namor’s creator, make him look just like he did in the ’40s and ’50s; that’s enhanced by a Sub-Mariner ’50s reprint, and a Thomas/Don Heck solo Strange story that explains how Doc, last seen in his full-blue-mask version in Strange Tales, has reverted back to his factory settings. This is an important late Silver/early Bronze-Age book, with improved paper and production showing off the art and 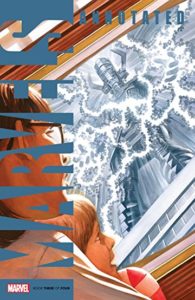 justifying  that $4.99 price. There are also a pair of $1 reprints — up to now, they’ve been called “True Believers” books, but are now “Marvel’s Greatest Creators”; that’s a problematic title when it makes you start wondering if, say, the Iron Fist first-Colleen-Wing issue by Doug Moench, Larry Hama and Dick Giordano, really counts more as “greatest creators” than one of the Chris Claremont/John Byrne issues would have. Still, Doug Moench has his own charms, especially on martial-arts ’70s comics, and the beauty of a dollar reprint is that it’s always worth it. The second $1 book, Invaders #1, is 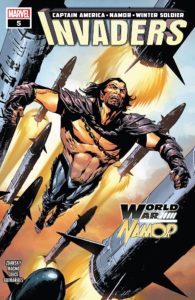 definitely worth it, with Thomas (again) and the great newspaper comic strip artist Frank Robbins retelling the WWII adventures of Captain America, Bucky, the Human Torch, the Sub-Mariner and other Marvel heroes from the beginning, in a tale that’s aged well, certainly much better than most comics published in 1975.  Finally, there’s Marvels Annotated, a re-presenting of that early-’90s Kurt Busiek/Alex Ross favorite, with commentary from both men, plus Busiek’s script, plus a lot of other minutia: it’s the most expensive of the four reprints, at $7.99, but if you’re fascinated by the nuts and bolts of creating comics, 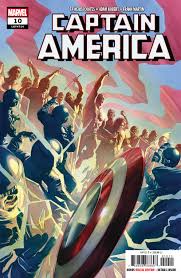 it’s worth it.  That leaves a few related new titles: The Invaders, for one, which has reunited the original Torch, Cap and Bucky to keep the always-hotheaded-but-now-actually-crazy Namor from going to war on the surface world, and ends its penultimate issue on a suitably-big cliffhanger. Captain America itself currently has Steve Rogers in a max-security prison run by Baron Strucker; Ta-Nehisi Coates, who’s been writing comics for over two years now, has developed a tightly-plotted, fan-friendly style that’s still able to raise some pointed political themes, and watching a member of the Kubert family do full pencils and inks is always fun: throw in the Alex Ross covers, and this is an easy comic to like. 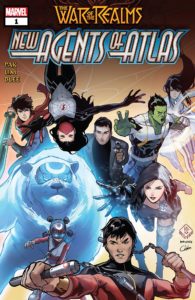 War of the Realms: New Agents of Atlas is another iteration of that longtime Marvel super-spy group from Greg Pak, who’s written about them often in the past; this 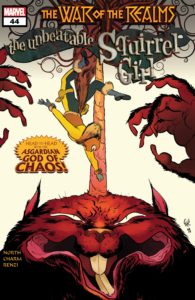 version has former S.H.I.E.L.D. agent Jimmy Woo recruiting the Amadeus Cho Hulk (now called Brawn), Ms. Marvel, Silk and Shang-Chi — all of Asian ancestry, and all of whom first got together in a couple of Pak’s Totally Awesome Hulk issues — to fight the Norse-monster invasion rampaging through so many Marvel books for the next few months. If you’ve liked Pak’s previous work (he’s been around for decades, and has a decent fan base) then you should like this too.  War of the Realms: Journey Into Mystery involves the infant daughter of Odin and Freyja being guarded by a group of heroes (the Miles Morales Spider-Man, the Kate Bishop Hawkeye, a Doctor Strange wannabe, a now-pacifist

Wonder Man, and the murderous talking Asgardian dog Thori) while they’re being chased by various elven and fire-demon bad guys; this is all played lightly, like a buddy-comedy road trip with occasional superheroics and fight scenes mixed in, so if you liked, say, the last version of West Coast Avengers, you might find it oddly charming too.  Unbeatable Squirrel Girl has the second of a three-part War of the Realms crossover, involving Doreen battling in Canada alongside the Norse god of Chaos, Ratatoskr; it’s the usual smart and fun Ryan North script, and Derek Charm’s art does a wonderful job making the shape-shifting Ratatoskr both cartoony and eerily menacing — this has been the best of 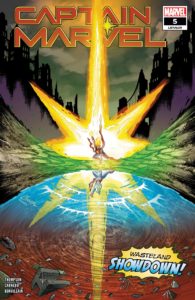 the Realm tie-ins, by far.  Unstoppable Wasp, like Unbeatable Squirrel Girl, continues to be a bright, airy female-empowerment series, the kind of comic that fans of the recent Hellcat — or Squirrel Girl, for that matter — would like; it’s got the same kind of “girls hanging out with each other plus superheroics” vibe, and its emphasis on women as scientists and inventors and engineers should endear it to a lot of parents and teachers.  Captain Marvel ends its first arc, about the Nuclear Man trying to set up a patriarchy and getting his head handed to him, and hits the group-of-women-warriors button well, too.  Picking a 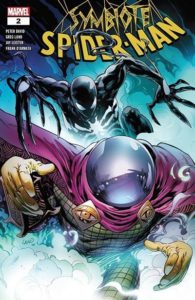 chauvinist dictator for Carol Danvers to fight, with its easy symbolism, and mixing in all the relationship stuff (especially the bits between Danvers and Rogue, whose long, complicated history as adversaries and colleagues is an easy source of drama and character-building) show why Kelly Thompson has become such a popular writer.  That leaves Symbiote Spider-Man, a new series set in the mid-’80s, just after the first Secret Wars, when Spidey had an “alien costume” but didn’t yet realize that it was, you know, an actual alien; Peter David is very good at mining the situation for both humor and continuity-rich drama, and if you liked that whole Amazing Spider-Man run between the introduction of the costume in #252 and Venom’s arrival in #300, then you’ll probably be a fan of this, too. 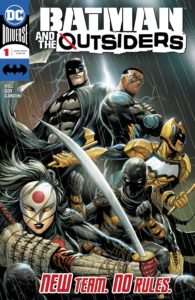 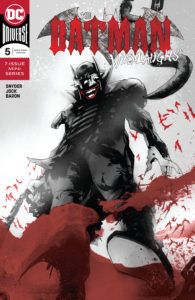 Cassandra “Orphan” Cain and Duke “The Signal” on missions supplied by Bruce Wayne), but of course putting the Bat on the cover — and having him show up in the comic for a couple of nice Dexter Soy in-costume splash pages — sells a lot more books. It’s a decent start, with writer Brian Hill establishing the introductions and characterization briskly, and providing enough action for Soy’s suitably shadow-drenched Gotham cityscapes.  The Batman Who Laughs continues the confrontation between “our” Batman and an alternate-universe Bruce Wayne who got infected with 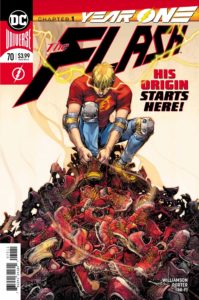 Joker venom and now… well, you know; as with a lot of Scott Snyder creations, he’s absurdly powerful, although seeing him go up against another Snyder group, the Court of Owls, provides some flash, and the Jock art, as always, is exactly as over-the-top as the story requires it to be.  Flash‘s writer, Joshua Williamson, celebrates writing 70 issues of the Scarlet Speedster’s current incarnation by beginning a “Year One” arc, with a young Barry Allen who’s just gotten blasted by the lightning, and is trying to figure out what’s going on; new-hero-learning-the-ropes tales are hard to screw up, and, although this isn’t the first time we’ve had an extended Flash origin, it looks like it should be a fun one. 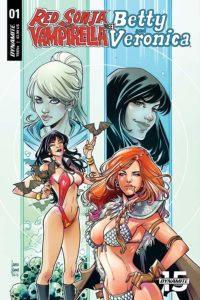 up attending high school with the gang, as part of an undercover occult investigation (Sonja ends up joining the football team…); the art’s in modern-Archie-realistic mode instead of old-school-cartoony. Readers will likely be split on whether the concept is stupid or cool — but, if you come down on the “cool” side, I won’t argue — and here it is.  Eve Stranger is both the title of a new Black Crown comic and the name of the main character, a young woman with no short-term memory who awakens in a hotel room with a package on the bed containing a gun and a set of instructions on a mission she must carry out within a week, or die; think of a mashup of The Bourne Identity and 50 First Dates, enhanced by Philip Bond’s clean, attractive art. Presumably, the series will involve a mission per episode, 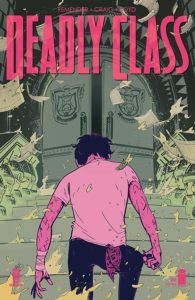 plus ongoing revelations and world-building: a good formula for a TV show and, judging by this first issue, for a comic too.  Deadly Class, by Phoenix’s own Rick Remender, has also become a TV series (with Remender as the showrunner, something that even Robert Kirkman never pulled off); the comic’s a couple of years ahead of the show, though, and this issue sees two of its main characters returning to the finishing school for assassins that they fled at the end of the book’s first “season”;  this has always felt like Remender’s most heartfelt and, weirdly, autobiographical work, with pulp and kung-fu movie references layered over an evocation of his late-’80s Phoenix high school years, and a great candidate for a trade-collection or back-issue binge.

With 40 years of experience in comic reading, collecting and reviewing, English Professor Phil Mateer has an encyclopedic mind for comics. Feel free to ask Phil about storylines, characters, artists or for that matter, any comic book trivia. He will post your questions and answers on the AABC blog. His knowledge is unparalleled! He is also our warehouse manager, so if you are looking for that hard to find comic book, ask Phil!
View all posts by Phil →
This entry was posted in New Comics, Reviews and tagged Batman, Batman Who Laughs, Captain America, Captain Marvel, Deadly Class, Defenders, Eve Stranger, Flash, Invaders, Iron Fist, Marvels Annotated, Red Sonya, Squirrel Girl, Symbiote Spider-Man, Vampirella, War of the Realms, Wasp. Bookmark the permalink.