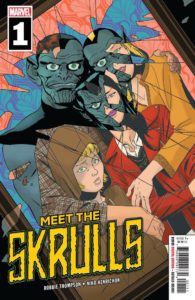 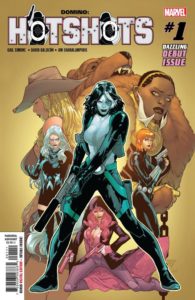 Of  the five Marvel mini-series first issues out this week, the only one with actual new characters is Meet the Skrulls (well, Prisoner X, sort of, but come on…); think of TV’s The Americans but with shape-shifting space aliens as the spies, and the stakes actual takeover of the world.  The family dynamics, clear from the cover, are that Mom, Dad and elder sis are on board with the whole “humans are 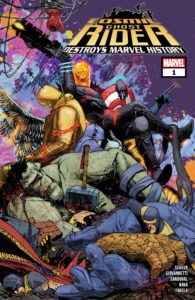 cattle” approach, but the younger emo girl just wants to fit in at school; the suburban setting and characters look sharp, the plot’s suspenseful, and if you liked, say, that Tom King/Gabriel Hernandez Walta Vision mini-series a few years back, then you’ll like this too.  Similarly, Domino: Hotshots is a mini-series by that character’s regular-book creative team, guest-starring the Black Widow and the Black Cat, so if you liked Gail Simone’s tough-gal noir and David Baldeon’s sleek figure work there, you’ll like it here too.  Cosmic Ghost Rider Destroys Marvel History #1 takes that Bugs Bunny-like figure (if Bugs had both cosmic and hell-spawned powers) as he time-travels back to the day before his family was killed by mobsters; he talks to his 5-year-old kid and tells him stories about how his time-traveling also let him take part in a number of key incidents in Marvel history (the FF’s inaugural, cosmic-ray-infused 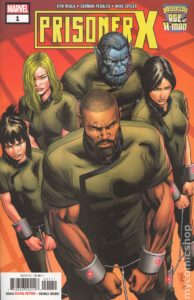 flight; Galactus and the Silver Surfer coming to Earth, etc.). If you like similar stories about Deadpool, with a similar loopy, self-aware humor, then this is for you.  Prisoner X is the fifth of six tie-in mini-series to the whole Age of X-Man saga, involving most of the major mutants getting transported to a utopian (or dystopian, depending on your point of view) future timeline; it focuses on Bishop, who’s in prison (“re-education”) for not playing along, and runs into Polaris, the Beast, and others;  although no one can quite recall their previous regular-Marvel-universe lives any more, some of their memories start to return, and there are hints of bad agents pulling strings from behind the scenes. You’re likely in for all of these tales, or none of them; if you’re in, it’s a decent-enough comic, and 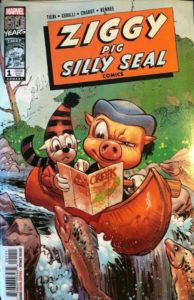 contributes some puzzle pieces to the overall story.  Ziggy Pig and Silly Seal #1 is the latest of Marvel’s 80th-anniversary genre celebrations, this time of its funny-animal books; it’s got a new story, where ZP and SS are part of the regular Marvel universe and they’ve broken up and Ziggy’s down on his luck — and if that sounds a lot like DC’s Ruff and Reddy mini-series from last year… well, yeah, it is.  Deadpool shows up, so the Merc’s completists will want it, the art’s OK, and the two-page historical article is good, but Marvel would have been a lot better off just reprinting some of Vince Fago’s classic work on the title from the ’40s — almost no fans have seen it, and its precise lines and bigfoot energy would have been a revelation. 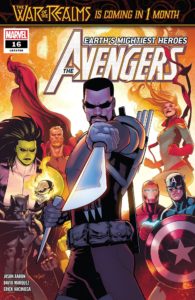 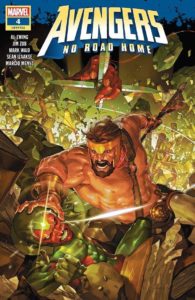 Legacy numbers indicate Marvel’s core titles, the ones that have been around the longest:  Avengers, for example, which is in the middle of a vampire civil war, and examining whether someone like Ghost Rider, who’s inhabited by a demonic spirit, can be a good guy, even if he 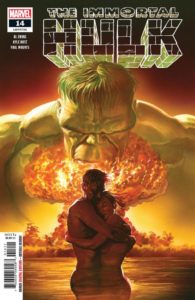 wants to; David Marquez’s crisp art meshes well with Jason Aaron’s offbeat sense of humor and fast-paced action scenes.  Companion series No Road Home is mostly the origin of bad girl Nyx, leading into an extended battle illustrating both her power and the Avengers’ teamwork; it does its job of getting readers to sympathize with her, and offers a particularly effective, scary Hulk. That makes sense, since Al Ewing, one of No Road Home‘s three writers, has been turning heads with his Immortal Hulk run. This week’s issue, about Bruce 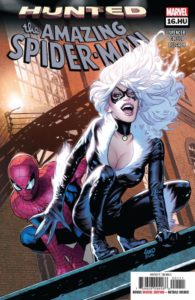 Banner and Betty Ross getting back together, is drawn by Kyle Hotz, whose ink-drenched EC-like style works well with the book’s many horror elements; as a mostly stand-alone story, it’s an easy opportunity to see what all the fuss is about.   Amazing Spider-Man is kicking off a ten-part arc with Kraven the Hunter called, unimaginatively, “Hunted.”  Four of the installments have an “HU” suffix (so, after last week’s Amazing Spider-Man #16, this week’s is #16.HU), and are “extra” issues spotlighting particular characters; this one, as you can tell by Greg Land’s pin-up style 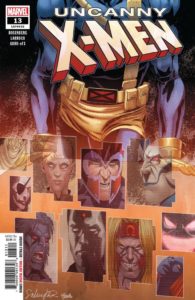 cover over to the left there, is about the Black Cat, and, especially since it’s by regular series writer Nick Spencer, has more than enough connection to the main story to make it worthwhile.  Uncanny X-Men sees Cyclops and Wolverine building a team from the mutants still on regular-Marvel-earth after almost everybody else ended up in Age of X-Man; Cyclops being Cyclops, he’s made a ranked bucket list of threats like Dark Beast, Mr. Sinister and the Marauders, and wants the group to pro-actively take them out while it still can: enough butt-kicking to keep the story interesting, and move it along, until the whole cast presumably gets back together in a few months. 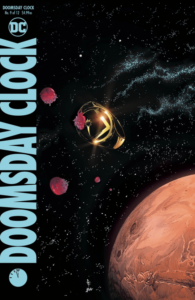 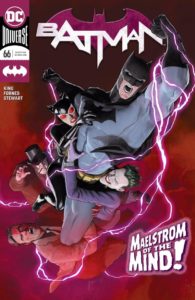 Doomsday Clock, after delays and a slow start, has gotten good — witness this issue’s moon-set confrontation between ultra-powerful Doctor Manhattan and pretty much everybody else, with Earth in political/anti-super turmoil and poised to descend into chaos. Geoff Johns and Gary Frank bring a satisfying depth of detail and drama, and I suspect that, once this is done and we can read it all in one sitting, the excruciatingly long times between issues will be forgotten, and we can just relax and appreciate the story for its widescreen, all-out adventure. Batman continues a series of one-shot “Batman’s dreams,” as he’s unconscious and caught by the bad guys; this one has The Question interrogating Selina Kyle about her decision not to marry Bruce, and gives writer Tom King a chance to 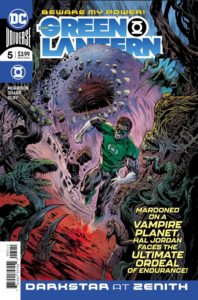 spotlight her character and the cat/bat relationship: the core of this series since its rebirth. Kudos to artist Jorge Fornes for making what’s basically a conversation with a couple of flashbacks visually interesting, good-looking and even sexy.  Green Lantern has Hal Jordan, as part of a deep-cover mission (one of those deals where he’s supposedly exiled from the Guardians and the GLC) trying to pass the initiation to become one of the cosmic-vigilante Darkstars; it involves running a gauntlet on a vampire planet, and it’s just as imaginative, weird and straight-forwardly action-packed as all of Grant Morrison and Liam Sharp’s other chapters of the GL reboot so far. Young Justice 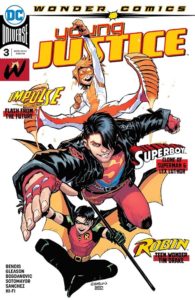 continues getting most of that original group back together, courtesy of an invasion, first, by Amethyst’s Gemworld to Earth, and then with the kid heroes going to Gemworld itself; it focuses on Conner Kent, the ’90s Superboy, and where he’s been, and bits like the reunion between him and Bart/Impulse should make fans of that previous series happy: there was some skepticism about how Brian Michael Bendis would do in his move to DC from Marvel last year, but darned if pretty much everything he’s touched, from the Superman books through his creator-owned stuff like Pearl to the “Wonder Comics” books like this, hasn’t been readable, smart, continuity-rich and compelling fun. 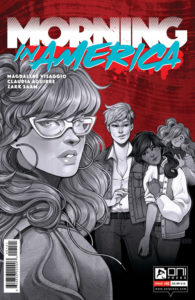 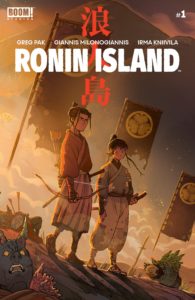 Morning in America, as its title implies, is set in the early ’80s, smack in the middle of the Reagan era, in a small 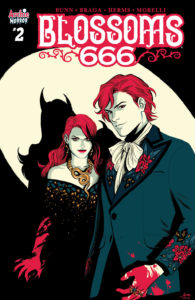 Ohio town; four high-school girls, mild delinquents, do a Goonies riff and try to solve the mystery of a number of missing teens, one that the authorities don’t seem to care about.  Good character work, by creators that you just know lived through that time and place, and the Claudia Aquirre art is brightly-colored and makes everyone look both relatable and realistic.  Ronin Island‘s title abode is inhabited by refugees from several west Asian countries, who’ve survived the “big wind,” some kind of 1800’s-era apocalypse; they’ve built their own diverse society, but now it’s being threatened by a warlord who’s risen in Japan, and 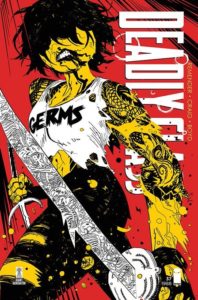 by more macabre outside forces.  Giannis Milonogiannis makes it very manga-like, with stylized faces and big splash pages, and the smooth energy of the narrative gives it a compelling kick.  Blossoms 666 is set in the Archie horror-verse of books like Afterlife With Archie, Jughead: The Hunger and Sabrina; it imagines the Blossom twins, Cheryl and Jason, as infernal siblings competing to corrupt Riverdale and earn the throne of Hell. You either take to a set-up like this or you don’t; if you do, here it is.  Deadly Class follows Saya, kidnapped by her Yakuza brother, and, after a surprising plot twist — or

two — gets her on the road back to the school for assassins and a meet-up with the rest of the cast; if you’re a new fan attracted by the SyFy TV show, don’t start with this — get the trade editions and catch up with the other 36 issues first — but if you’re a regular it’s the same effective mix of violence, betrayal, courage, cowardice and action as always.  Die (Kieron Gillen’s new D&D-flavored series, not be confused with Robert Kirkman’s Die!Die!Die!) continues its world-building, as its group of former high-school buddies trek through its virtual-reality landscape, trapped by the friend they abandoned there decades ago;  its use of 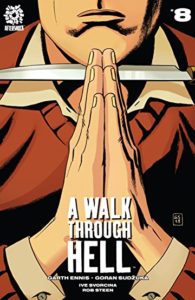 role-playing memes, but translated to real-world ramifications (what’s the ethics of screwing up a bunch of NPCs if they really, in some sense, exist?) makes it both thoughtful and entertaining, like a much more serious (and actually drawn) extended episode of Knights of the Dinner Table.  A Walk Through Hell gets to one of those payoff issues where we get the origin of the bad guy, a serial killer who’s a vessel for the Antichrist; as you might expect, it’s got at least a couple of Garth Ennis’s patented chilling horror scenes, made all the more terrible by the 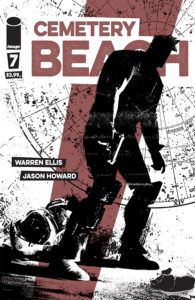 calm, smiling, unassuming way its narrator describes them. Cemetery Beach concludes its mini-series with many explosions and crashes, appropriate for a comic that’s been pretty much a seven-issue extended chase sequence; it looks from the ending like there’ll be at least a second volume, and seeing more of Warren Ellis and Jason Howard’s totalitarian space colony, its psychopathic president, the revolutionary riot grrl who opposes him, and the secret agent from Earth who falls in love with her as they’re running for their lives, is all fine with me.

With 40 years of experience in comic reading, collecting and reviewing, English Professor Phil Mateer has an encyclopedic mind for comics. Feel free to ask Phil about storylines, characters, artists or for that matter, any comic book trivia. He will post your questions and answers on the AABC blog. His knowledge is unparalleled! He is also our warehouse manager, so if you are looking for that hard to find comic book, ask Phil!
View all posts by Phil →
This entry was posted in New Comics, Reviews and tagged Avengers, Batman, Blossoms 666, Cemetery Beach, Cosmic Ghost Rider, Deadly Class, Die, Domino, Doomsday Clock, Green Lantern, Hulk, Meet The Skrulls, Morning in America, Prisoner X, Ronin Island, Spider-man, Walk Through Hell, X-men, Young Justice. Bookmark the permalink.