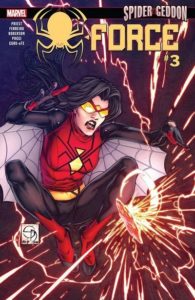 Lots of spider-books out this week, many connected to the Spider-Man: Into the Spider-Verse animated movie out Friday (and 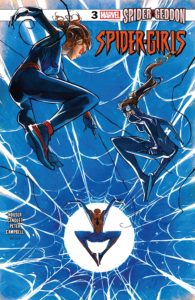 currently with a 98% rating on Rotten Tomatoes): Miles Morales: Spider-Man relaunches the film’s breakout character, in his first series not written by creator Brian Bendis; scripter Saladin Ahmed does a good job of introducing Miles and his supporting cast, and Javier Garron has an open, attractive style that should attract both new and old readers. Ahmed uses the Rhino as the bad guy; as he did with the Absorbing Man in his well-received Black Bolt mini-series, he humanizes and deepens him.  It’s not a stand-alone tale,  but using six-issue arcs to write for a trade collection is standard practice now, so as a complaint that’s small 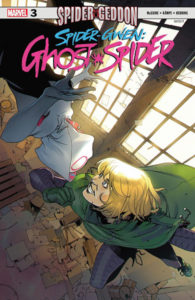 potatoes for an otherwise-attractive package.  The Spider-Geddon crossover event, with its emphasis on alternate-universe spider-avatars battling the multiverse-threatening Inheritors, is another close movie tie-in; three mini-series related to it conclude this week, all wrapping back into next week’s finale in Spider-Geddon #5. Spider-Force #3 has the benefit of a smart script by Christopher Priest, and features the “regular” versions of Jessica Drew and Kaine teaming with a Spider-Girl and a future-version Spider-Kid to chase down a possibly game-changing crystal; similarly, in Spider-Girls #3, three other Spider-Girls — “our” Anya Corazon, plus Annie May Parker (the 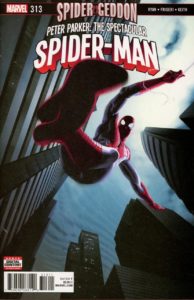 daughter of Peter and Mary Jane from the just-concluded Spider-Man: Renew Your Vows comic) and May Parker (another Pete/Mary Jane kid, from the ’90s/’00s-era Spider-Girl series) set up Annie as an arachno ex machina who’ll, presumably, figure prominently in the overall conclusion. Spider-Gwen: Ghost Spider #3 is the least related to the main event — but it gets Gwen out of the alternate universe she’s trapped in, and establishes a breezy, YA-friendly tone that should serve her well in her upcoming new series. Spectacular Spider-Man is a tie-in, too: it’s got the conclusion of a Spidey solo battle against the Inheritor Morlun, and yet another last-page wraparound to the main event. Ironically, the one 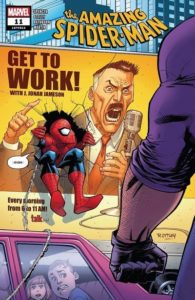 spider-book that doesn’t connect is the flagship one: Amazing Spider-Man #11 (actually #812), which covers current Marvel-universe New York City mayor Wilson “The Kingpin” Fisk and his machinations against both Spider-Man and his new ally (and former mayor) J. Jonah Jameson; Nick Spencer and artist Ryan Ottley keep the plot bubbling merrily, and mix in a sequence with very old spider-foes the Enforcers to add some nostalgia, too. This latest relaunch has felt a tad lightweight to me, but I’m in the minority; sales have been above average on it, and in fact the whole line, from Peter to Miles, has been generating interest that Into the Spider-Verse should only increase. 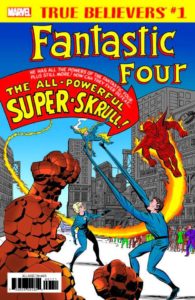 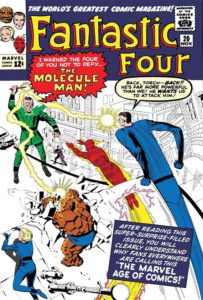 Marvel’s original flagship title, Fantastic Four, continues its own relaunch, with another group of “True Believers” classic reprints for a buck each, this time of the early-’60s issues #18, 20 and 35, all by Stan Lee and Jack Kirby.  Each raucous, unpredictable page is a building block of the Marvel universe (your $3 buys you the first appearances of the 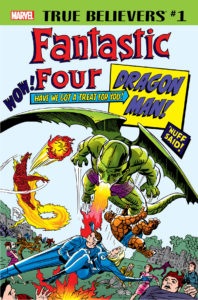 FF-powers-duplicating Super Skrull,  the ultra-powerful Molecule Man, and, a little over a year after that, the android Dragon Man; all three are still around, 50 years later) that would soon overtake rival DC and, eventually, conquer the world. To check in with today’s FF, get the Wedding Special, celebrating the upcoming nuptuals of Ben Grimm and longtime girlfriend Alicia Masters; the always-dependable Gail Simone teams 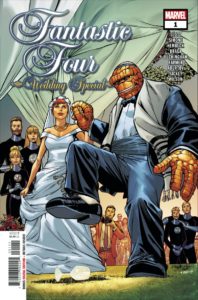 with Laura Braga to look at Alicia’s bachelorette party, while regular FF writer Dan Slott pairs with former Fables penciller Mark Buckingham and Mark Farmer in a tale about Ben going to talk to Alicia’s father, the imprisoned Puppet Master; for dessert, there’s a three-pager, also focusing on Alicia’s dad, by longtime fan cartoonist Fred Hembeck. If you’re following the main FF book, and looking forward to the actual wedding next week, then you’ll find this a decent companion/run-up to it. 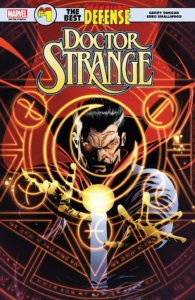 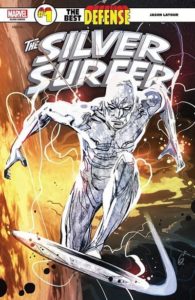 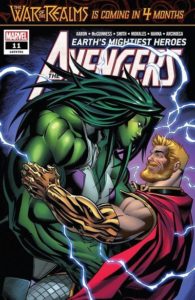 The “Best Defense” series of one-shots leading up to next Wednesday’s Defenders revival has two final offerings this week: Doctor Strange and Silver Surfer.  Doctor Strange sees a future Doc in a post-apocalyptic landscape, courtesy of Dormammu, which allows Greg Smallwood’s horror-tinged art to get off some good effects; 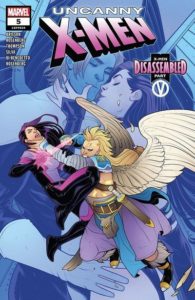 Jason Latour’s cosmic visuals in Silver Surfer (which he also wrote) are similarly effective, as the Surfer finds a quest connected to Strange’s, one that leads him back to Earth and, inevitably, that Defenders relaunch. Meanwhile, over in Marvel’s tentpole group book, The Avengers, Captain Marvel mentors Ghost Rider and checks out his car, while Thor can’t decide whether he wants to date Jennifer Walters or her She-Hulk alter ego, Avengers leader the Black Panther meets with international heroes in a summit designed to shore up support for their newly-world-based strategy, and 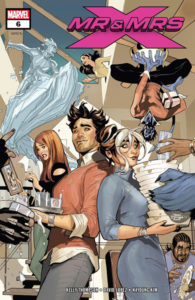 an old friend decides that the team is a threat to America’s security, with deadly results: all the entertaining soap-opera style plots and subplots that make a serial superhero comic worth following.  Uncanny X-Men offers that, too, as an insane (and insanely powerful) Nate Grey continues to implement his plan to take over the world, with Magneto and the Angel, among others, in thrall to him, playing Pinky to his Brain; it’s issue five of a ten-part weekly story, so don’t expect the good guys to win just yet — although at least one of them changes considerably in this issue. Mr. and Mrs. X is pitched on a smaller scale, and the better 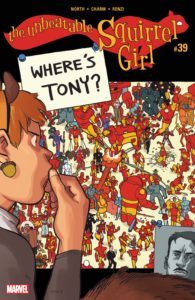 for it, as Rogue and Gambit throw a belated engagement party, and lots of interesting cast members show up; it’s a lot of fun, with multiple callbacks for fans, and the Terry and Rachel Dodson cover (check it out, just up to the left there) makes it even better.  Unbeatable Squirrel Girl has Doreen and Nancy fighting a possibly-alien-replaced Tony Stark, and is similarly fun — and, as always, uniquely its own, from the “Where’s Waldo” inspired cover to the defeat of a computer by, among other things, having it calculate a Mandelbrot set, to Ryan North’s dry-humored asides in the bottom margins, to the unexpected resolution and yet another cliffhanger ending. 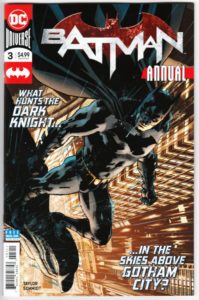 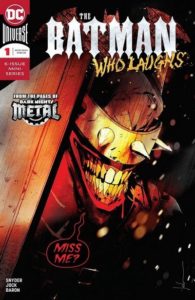 At first I thought the new Batman Annual was written by Tom King, the regular Batman creator, but it turned out it was by Tom Taylor; that’s OK, though, because Taylor, who’s been writing the dystopian videogame tie-in Injustice for forever, knows his way around the regular DC universe too, and this tale, focusing on the Batman/Alfred relationship, gets off a number of touching emotional beats — and its title, not revealed until the end of the story, is just perfect.  There’s little that’s “touching” about the other Bat-book this week, the first of a Batman Who Laughs mini-series, unless you mean “touching an axe that slices open 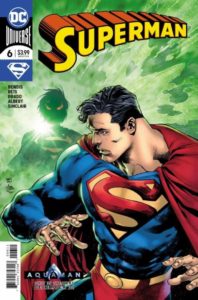 the Joker’s head.” That character (an alternate-universe Batman who ended up infected by the Joker’s insanity) was the most popular breakout from Scott Snyder’s Dark Knights: Metal mini-series last year, and Snyder and artist Jock are a dream team for any bat-comic, so this should be on everyone’s list. Snyder does have a tendency to blithely drop impossible big reveals in casual quotes (what happens if the Joker dies?), but hey, it’s comics — and the last-page suspense-builder is absolutely guaranteed to bring every reader back for the next issue.  Superman ends its first arc under new scripter Brian Bendis, and it opens with Bendis giving Ivan Reis six double-page splashes to detail a battle between Superman, Zod and the Krypton-murdering Rogol Zaar. Reis doesn’t disappoint, either — and the rest of the book, which

resolves that battle, leaves some dangling plot threads, and then sets up a final-panel shock reveal — is very smoothly and entertainingly done; paired with it’s companion book, Action Comics, the first six months of Bendis’s super-scripting assignment looks like a success.  Goddess Mode is a near-future tech-world comic about a Google-like corporation called Azoth whose A.I. rules the world — but there’s a mysterious virus/syndrome that keeps putting people into comas,  including Azoth’s two founders; now, one of their daughters, a low-level tech in the company, is dealing with mysterious outages and apparitions while trying to help her dad. The smart, character-centric script and cool art and coloring (especially in the cyber-sequences) make it worth reading. New Talent Showcase is 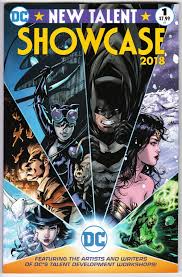 DC’s annual anthology of new creators who took part in its talent development workshops; there are six stories: Batman by Philip Kennedy Johnson and Amancay Nahuelpan; Constantine by Sanya Anwar and Prescilla Petraites; Catwoman by Joey Esposito and Dominike “Domo” Stanton; John Stewart by Robert Jeffrey II and Max Raynor; Zatanna by Ryan Cady and Isaac Goodhart; and Wonder Woman by Magdalene Visaggio and Aneke. Some of the creators on that list are already pros, and many of the others will have a shot, too, so this is exactly the convenient sampler of up-and-coming writers and artists that it wants to be. Sasquatch Detective is just what its title says: she’s an LA cop who happens to

be furry and strong and a member of the Bigfoot branch of the zoological kingdom. The character first appeared as a back-up strip in the six-issue mini-series Exit Stage Left: The Snagglepuss Chronicles; those are reprinted here, along with a new origin story. There’s an appealingly breezy, confident tone, both to the book and to S.D. herself, that’s reminiscent of Squirrel Girl (with its similar subtle-but-empowering message about being comfortable in your own skin), and makes it worth a look; at $7.99, it offers a big chunk of reading, and would be a great stocking stuffer especially for any early- or pre-teens on your holiday-buying list (but you’re allowed to read it first…). 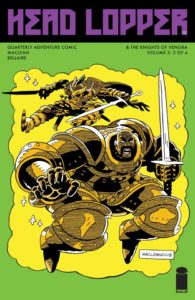 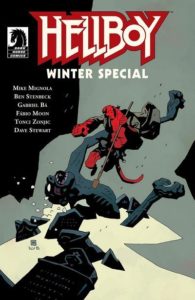 Head Lopper is Conan if he were old and grizzle-bearded and carried around the talking head of a witch he’d defeated and was drawn by some high-end European guy like Moebius; it’s on the second chapter of a four-part story, but check out Andrew Maclean’s thin, clear line and Jordie Bellaire’s vivid coloring (look at the effects he gets out of bright yellows and blues), and you’ll be hooked.  Hellboy Winter Special continues a long Dark Horse holiday anthology tradition, with: a Mike Mignola-written folk tale drawn by Ben 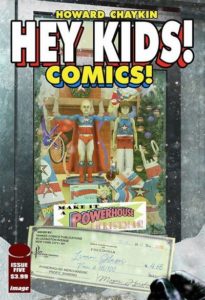 Stenbeck, a Bulgarian-set one by Gabriel Ba and Fabio Moon, and a six-pager entirely by Tonci Zonjic: all are darkly entertaining, and have art worth admiring over a long December night.  Hey Kids! Comics!, Howard Chaykin’s decades-spanning intermingling of the comics industry’s many confrontations, con jobs, quotable moments and urban legends, ends its first series at comics’ most famous 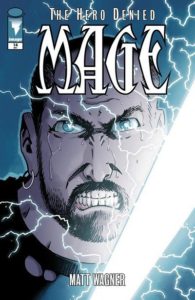 beginning: the day Siegel and Shuster sold their creation; Chaykin’s ability to capture both the creative joy and the profit-minded original sin of that moment show why he’s the guy to be producing this book.  Mage is the penultimate issue of a 35-year (and 45-episode, give or take) story; if you’ve followed it at some point in that span, you’ll want this and the final episode, due in February; if not, hook up with the first graphic-novel collection during all the upcoming holiday downtime, and see what first attracted fans to it, all those years ago.

With 40 years of experience in comic reading, collecting and reviewing, English Professor Phil Mateer has an encyclopedic mind for comics. Feel free to ask Phil about storylines, characters, artists or for that matter, any comic book trivia. He will post your questions and answers on the AABC blog. His knowledge is unparalleled! He is also our warehouse manager, so if you are looking for that hard to find comic book, ask Phil!
View all posts by Phil →
This entry was posted in New Comics, Reviews and tagged Avengers, Batman, Batman Who Laughs, Doctor Strange, Fantastic Four, Goddess Mode, Head Lopper, Hellboy, Hey Kids! Comics!, Mage, Miles Morales, New Talent Showcase, Sasquatch Detective, Silver Surfer, Spider-Geddon, Spider-man, Squirrel Girl, Superman, X-men. Bookmark the permalink.