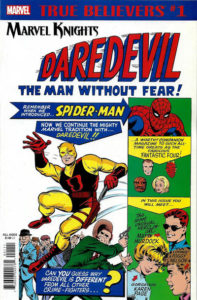 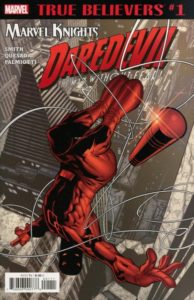 Marvel’s “True Believer” $1 reprints have been providing cheap comics history for a while now; this month they’re focusing on the 20th anniversary of the Marvel Knights imprint (which included grittier street-level NYC heroes like Daredevil, Luke Cage, Moon Knight, and the Punisher, plus the Black Widow, Shang-Chi and the now-acclaimed Christopher Priest Black Panther series), and this week’s spotlight is on Daredevil: three comics marking various high points of the Man Without Fear’s career. Daredevil by Lee and Everett is the original debut from 1964; as advertised, it’s by Stan Lee and Bill Everett, and as an origin story it’s the North Star for everyone who followed, establishing Matt’s childhood act of bravery that led to his blindness (and compensating enhanced senses), his fight-for-the-little-guy law career (with partner Foggy and secretary Karen), and his 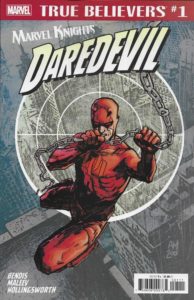 pugilist father, whose struggles with mob entanglements cause Matt to put on a costume and fight for justice. Daredevil by Smith, Quesada and Palmiotti is the very first actual Marvel Knights comic, from 1998; the “Smith” is filmmaker Kevin,  the “Quesada” is longtime Marvel uber-editor Joe, and the “Palmiotti” is Jimmy, who, with his partner and wife Amanda Connor, just spent the last couple of years making DC’s Harley Quinn book readable and interesting, so there’s a lot of creative power there. So too for Daredevil by Bendis and Maleev, which reprints the first of what was to be a long, well-received Brian Bendis/Alex Maleev run. For $3, less than the price of most new single comics, you owe it to yourself to read these. 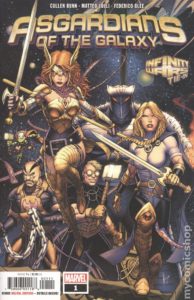 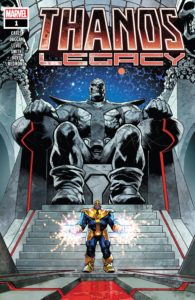 You have to admit, Asgardians of the Galaxy is a great title, especially since it sums up the book nicely: a group of Asgard-related characters (Valkyrie, Angela, Skurge the Executioner, Thunderstrike II, and the robotic Destroyer, who’s possessed by someone who’s a last-page surprise reveal) who are trying to rescue the galaxy from Infinity Wars-related destruction. Pretty good plot and art, and a decent 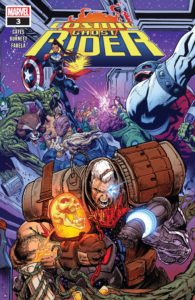 mix of personality types and mysteries, should be enough to carry this for at least a couple of issues, especially for fans of Marvel’s more-cosmic comics. Infinity War-related chaos is also the subject of three books written by rising Marvel star Donny Cates: Thanos Legacy is a one-shot that gets the purple-chinned Titan from the end of Cates’s previous Thanos run to his current status of being “dead,” and wraps right back into Infinity Wars, while Cosmic Ghost Rider offers an infant Thanos, time-napped by the mostly-insane title character in an effort to keep him from growing up into a mass murderer; his success can be measured by yet another last-page

reveal, one perfectly in keeping with this comic’s cheerful, everything-including-the-kitchen-sink B-movie pizzazz.  Death of the Inhumans has some of that, too, with the death toll slowing down as the title group rallies to fight its executioner, and we get an idea of just how tough Black Bolt is — as well as yet another last-page character intro, this one both surprising and, given the book’s circumstances, logical. Cates is at the stage of his career where he’s just bubbling over with ideas, and because fans haven’t seen much from him he’s still fresh; there’s a built-in attraction to watching the talented new guy show his stuff, and so far he has enough tricks not to disappoint. 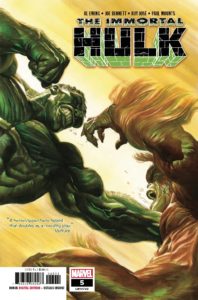 Avengers, having concluded the first arc of its relaunch last issue, pauses for an “Avengers 1,ooo,ooo BC” story, involving the origins of the Ghost Rider.  It’s pretty good, especially the Sara Pichelli art; it bugs me that Marvel, or at least Jason Aaron, apparently believe there were cavemen and mammoths around that long ago, but ,considering there are also Norse gods and Phoenix Forces in the story, 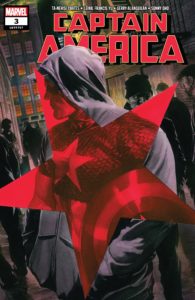 I suppose that’s misplaced realism….  Meanwhile, Immortal Hulk concludes a two-parter with a possessed Walter Langowski/Sasquatch; the surprise is who he’s possessed by.  Al Ewing and Joe Bennett have made this incarnation a compelling, horror-based take that’s both physical and psychological; both factor into the story, and add to its powerful ending. Captain America sees Ta-Nehisi Coates mixing regular superhero fare (Hydra, multiple Nukes,  and another of those last-page super-villain reveals) with social commentary (Hydra infiltrates depressed, opioid-riddled Midwestern communities by making the run-down roads, schools and hospitals better, and nobody cares about their behind-the-scenes corruption); 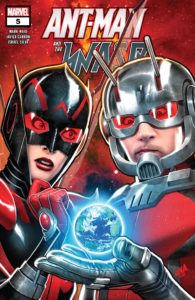 it’s a good combination, pertinent without being preachy, and penciller Leonil Frances Yu offers steady, clear art to accompany it. That leaves Ant-Man and the Wasp, which concludes its story; creators Mark Waid and Javier Garron having delivered a space and dimension-spanning romp involving quantum entanglement, weird alien societies, and a growing friendship between Scott Lang and Nadia Van Dyne. This issue marks the end of their team-up, but the comic isn’t really over; it just loses Lang, Waid and Garron and becomes the new Unstoppable Wasp next month, with a more cartoony (and Scholastic Book market-aimed) style and creative team. 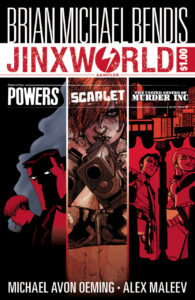 When Brian Michael Bendis moved to DC a couple of months ago, he took his backlog of creator-owned “Jinxworld” titles with him; those. This giant-size $1 comic reprints the first issues of three of them: Scarlet, United States of Murder, Inc. and Powers — all crime/noir stories with 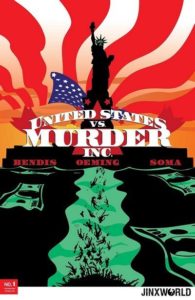 twists: Scarlet imagines a Portland kid whose boyfriend is killed by corrupt cops, and begins a revolution to avenge him; USVMI is an alternate-history where the Mafia, instead of being curbed by law enforcement in the ’60s, grew in power to rival the federal government; Powers, Bendis’s first, pre-Marvel hit, is a police procedural in a world of super-heroes. With Michael Avon Oemings’s distinctive, sharp-edged art on the latter two, and Alex Maleev on the first, these are all thoughtful, action-packed, fun and wonderful to look at; DC’s got new trade editions/collections of all the previous issues, too, so this sampler acts as a gateway into a lot of great comics reading.  United States vs. Murder, Inc. #1, also out this week, continues that series with a slight title change and an origin for Jagger, its 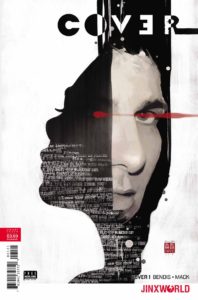 female hitman… er, person; it’s a stand-alone tale, so you don’t have to have read the trade collection to get it; if the Sampler story intrigues you, it’s an easy next step. Cover is brand-new, and shows Bendis’s ability to attract stylish top artists, with David (Kabuki) Mack adding his lush watercolored art to a story about a comics artist who gets recruited by the CIA as an international operative (considering Matt Kindts’s new Black Badge, about Boy Scouts with similar extracurricular government activities, there’s a lot of that going around right now…); it looks like a launchpad for some good-looking and fun spy stuff, and should be a good fit with the other books in the Bendis stable. 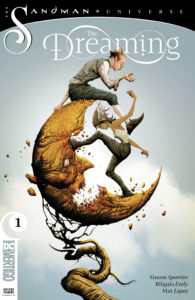 The Dreaming is the first of four new Vertigo books utilizing Neil Gaiman’s Sandman universe and characters; Simon Spurrier’s a smart enough writer to get everyone’s voices right, and mix in some new characters with the old; he’s also got a decent balance of drama and humor, while Bilquis Evely’s art handles both the fantastic and the human elements well (sometimes, as with the antagonist here, even when they’re part of the same character), and if you liked the ’90s incarnation of this book, chances are 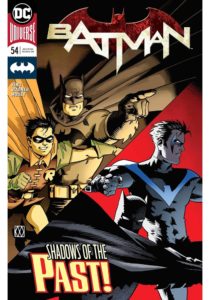 you’ll like this one too.  Border Town is set here in Arizona, in the fictional town of Devil’s Fork; it’s about a group of misfit high school students, mostly Latinx, who battle both bullies and supernatural entities taken from Mexican folklore.  Arizona doesn’t come off particularly well in this first issue, with its newly-arrived young protagonist seeing its population largely as rednecks and bullies — but Eric Esquivel, the writer, moved from Illinois to Tucson’s Rincon High School in the early ’00s, when he was a sophomore, so (a) he comes by those reactions honestly, and (b) the portrayals are likely to get more nuanced as the story develops.  If you think you’d like a sort of Latin-flavored The Goonies, only with more actual 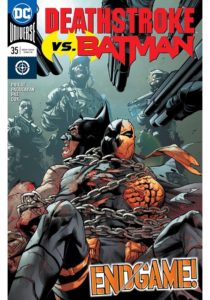 supernatural beings mixed in, then this might be to your liking.  Batman is noteworthy for being drawn by longtime artist Matt Wagner, and is a look back at the Dick Grayson/Bruce Wayne relationship, as Dick comes to help his mentor through his wedding cancellation and we get lots of flashbacks; it’s the usual detailed, canny script and plot by Tom King.  Deathstroke finishes up its own Batman story, a six-parter by Christopher Priest, as the two characters have been battling over an apparent revelation about Damian Wayne’s true parentage; it ends up exactly where you’d think, but delivers a lot of satisfying punching, double-crossing and snarky dialogue 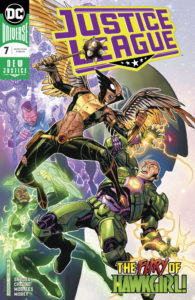 to get there (the best part has been the team-up between the two adversaries’ assistants, Alfred and Wintergreen, who bond over their charges’ peculiarities and stubbornness). Justice League continues its widescreen first arc about the League fighting with the Legion of Doom over the future of the multiverse; as it moves beyond the “bad guys victorious” installments into the “heroes fight back” ones, it becomes a lot more satisfying, and Scott Snyder’s ideas about the ultra-cosmic underpinnings of the DC universe have been fun, too — and probably important for the company’s meta-story (how, or if,  it all connects with, say, Geoff Johns’s Doomsday Clock remains to be seen…). 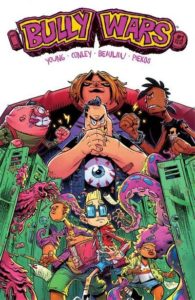 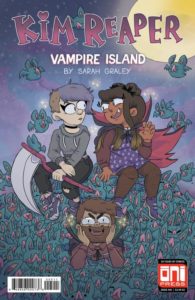 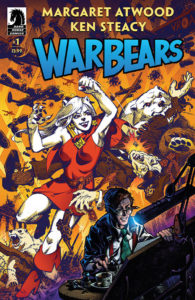 Bully Wars is about a group of junior-high students transitioning to high school; they’re still tormented by their class bully, but he finds the step up to the big leagues harder than he anticipated; this all works because it’s written by Skottie Young, who’s very good at this kind of slightly-younger-reader romp. Kim Reaper: Vampire Island continues Sarah Graley’s series about two young women, college students, who are developing a relationship that’s complicated by the fact that one of them, Kim, has a 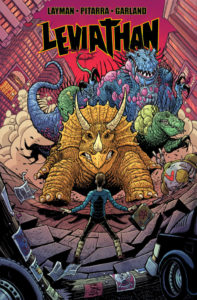 part-time job collecting souls as a grim reaper; the resulting title pun, and a look at the cartoony but weirdly attractive art on the cover up to the left there, should let you know whether you’ll like  it).  War Bears is about WWII-era Canadian comics, with its focus on both a comic book company — and its creators and editors — putting the stories out, and one of its fictional hits, about a Wonder Woman-type Nazi fighter who, 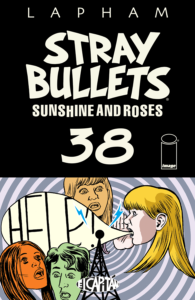 befitting her Great White North origins, is a were-bear. The originator is Margaret Atwood (yes, that one, of Handmaid’s Tale fame), and her co-writer and artist is Ken Steacy, so both the “real-life” sequences and the pages we see of the fictional comic are very good-looking; the nebbish writer/artist, his hard-as-nails woman editor, and the other ’40s-style hangers-on in the cast make this easy both to read and to like.  Leviathan 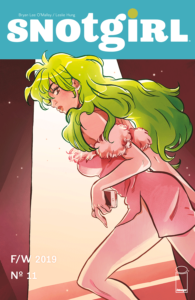 is John Layman’s Chew follow-up, about giant radioactive mutant dinosaurs stomping around modern-day New York; Nick Pitarra has a detailed, Geoff Darrow-but-cartoonier style that fits it well. Stray Bullets breaks from its regular plot for an “Amy Racecar”  episode, but then dovetails it into the main story after all; it’s another piece of David Lapham’s long-running action/comedy/suspense/noir life’s work.  Snotgirl comes out sporadically, and I can never remember exactly what the hell’s going on in it, but it’s very pretty, and I trust Bryan Lee O’Malley enough to keep buying it, and someday I’ll read it all and it’ll make perfect sense.

With 40 years of experience in comic reading, collecting and reviewing, English Professor Phil Mateer has an encyclopedic mind for comics. Feel free to ask Phil about storylines, characters, artists or for that matter, any comic book trivia. He will post your questions and answers on the AABC blog. His knowledge is unparalleled! He is also our warehouse manager, so if you are looking for that hard to find comic book, ask Phil!
View all posts by Phil →
This entry was posted in New Comics, Reviews and tagged Ant-Man, Asgardians of the Galaxy, Avengers, Batman, Border Town, Bully Wars, Captain America, Cosmic Ghost Rider, Cover, Daredevil, Deathstroke, Hulk, Inhumans, Jinxworld, Justice League, Kim Reaper, Leviathan, Snotgirl, Stray Bullets, Thanos Legacy, The Dreaming, The Wasp, United States Vs. Murder Inc.. Bookmark the permalink.