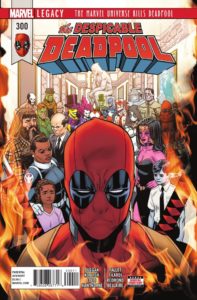 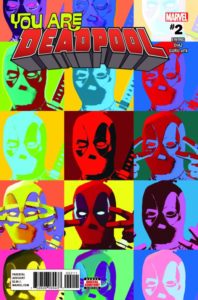 Deadpool has, of course, a movie coming out very soon, so there will be lots of Merc With a Mouth comics; his 300th issue kicks off the festivities, although it’s much more of an end than a beginning — Gerry Duggan, who’s written more issues with Wade Wilson than any other writer, is leaving the book. That makes this book both a culmination/finale, and a putting-the-toys-back-in-the-box move that leaves the character reset back to his factory settings for the next creative team, so if you’ve been a fan at any time during the ’10s it’s worth a look. How you feel about it depends on how you feel about a comic that opens with 15 pages of vomit jokes — but that kind of slapstick humor, mixed with angst, has always been Deadpool’s appeal, so complaining about it seems beside the point. More experimental — and in a good way — is the second issue of You Are Deadpool, a five-issue weekly find-your-

own-adventure series that ping-pongs around imaginatively (whether you should read this issue, or wait for next week and issue three (or four after that), depends on the choices you made in the initial book last week), and is a lot of pure fun. Adamantium Agenda is the second of four “Original Wolverine is back, but we’re making you read four mini-series before you get to see him” books, and, like Weapon Lost last week, is surprisingly good for a naked cash grab: it has Iron Man (the Tony Stark one), Spider-Man (the Peter Parker one) and Luke Cage/Jessica Jones repaying an old favor by infiltrating an underworld auction that supposedly involves Logan’s entire DNA code — but turns out to be something else entirely; kudos to writer Tom Taylor for showing that someone besides Brian Bendis can write good Luke/Jessica banter, and there’s a

twist/cliffhanger ending that should be effective at bringing everyone back for issue #2.  Venom #1 (also #166; as a collector, I’m a big fan of that double-numbering…) is by the red-hot Donny Cates, who makes good use of artist Ryan Stegman’s shadowy style to craft an sf-alien-horror book that shows his extensive knowledge of the character, and confirms that his work on God Country, Redneck, Doctor Strange and Thanos, among others, is no fluke: it’s imaginative and suspenseful, and a great place to jump on for what looks to be a thrilling ride (Cates’s first issue of Thanos, #13, is selling on eBay for around $50 right now, so get this book while it’s on the stands at $4.99…). 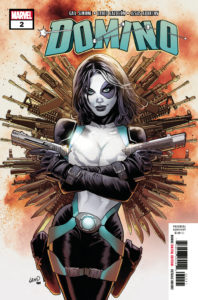 Domino continues Gail Simone’s return to Marvel; she talks in the editorial material about how much she’s grown

to love the kick-ass, luck-fueled mutant mercenary, and it shows: this is a fast, fun and female-centric action story, with David Baldeon’s art just manga-ish enough to add to the snap and flow of the fight sequences, and make the characterization/conversation parts look good, too: with Domino getting a prominent role in that Deadpool movie, it’s a perfect time to see what’s so intriguing about her.  Squirrel Girl begins a new era with regular artist Erica Henderson, a big part of the character’s unique breakout appeal, having left the book. Does that mean the magic is gone? Maybe not — Doreen’s writer, Ryan North, is still on board, and new artist Derek Charm is both used to working with him, and used to following Henderson: he did the

same on Jughead, after that comic’s first North/Henderson arc, and it didn’t miss a beat. Here, it takes a little getting used to the character’s different look, but everyone talks and acts the same, and the plot, involving Kraven and the regular gang going on one of those escape-room puzzle-solving outings (which of course turns deadly) is as snappy and reader-friendly as always. Runaways continues to be just what it’s supposed to be: a brisk and character-rich YA serial, leavened with humor and relationship drama — and does it well; Kris Anka’s cartoony style fits the book’s atmosphere, and she’s good at communicating a lot in just a few lines — look at Old 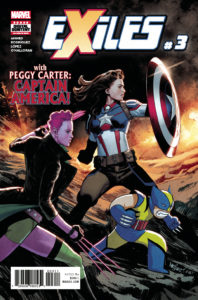 Lace’s and Gert’s mutual grins when the subject of Jurassic Park comes up. Exiles is another fast-paced, fun mashup, with its alternate-universe mix of previous mainstay Blink, a cartoon-kid Wolverine, a Grimjack-like Kamala Khan, a Valkyrie, and, in this issue, a distaff WWII-era Captain America who’s Peggy Carter instead of Steve Rogers. All that deep-dive continuity cross-referencing is part of the fun, of course, and so far Saladin Ahmed (another currently-hot writer) and artist Javier Rodriguez, whose style is in the Chris Samnee/Darwyn Cooke retro vein, have made the book’s first arc just as cool, and compelling, as it ought to be. 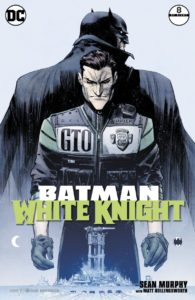 Justice League: No Justice sees Brainiac coming to Earth to recruit/kidnap, not only the JLA and the JL, but the Titans, Teen Titans and Suicide Squad (and a few others) for help against a universe-threatening, Celestial-level menace called the Omega Titans. It turns out there are four of them, so the heroes (and a couple of villains) do one of those classic Gardner Fox split-ups into four groups, and we’re off.  This is a weekly series, something that’s fast becoming the norm for

this kind of crossover — and a good thing, too: having everything ready to roll makes the story both dependable and fast, with no momentum-destroying delays (*cough* Doomsday Clock *cough*), or time for readers to get distracted.  Batman: White Knight ends its eight-issue run about what happens when the Joker gets on effective meds; it’s been that best of comics surprises: an unexpected hit, with Sean Murphy unafraid to carve out his own Elseworlds-style slice of continuity (two Harley Quinns…), and make us care about its cast anyway.

Sideways continues to be a pretty-decent new-character launch, in the teen-hero genre (it reminds me particularly of the early Gerry Conway Firestorm), with cast- and new-villain building and soap-opera-style subplots, helped considerably by Kenneth Rocafort’s detailed, almost-fussy (but good-looking) art, while Eternity Girl is much more experimental (and existentialistic), but is similarly helped by Sonny Liew’s looser, more-cartoony drawing — nothing like Rocafort’s, except that they both share unique artistic views of their book’s worlds, and are able to pull the readers right into them: the antithesis of a DC house style, and all the better for it. 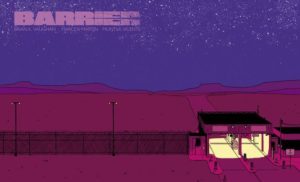 Barrier is by Brian K. Vaughan and Marcos Martin (and very 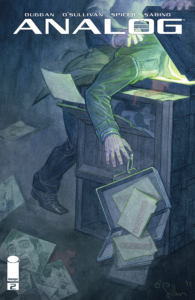 elegantly colored by Muntsa Vicente), a digital-first comic from a couple years ago — which explains its widescreen, sideways format — that uses illegal immigration and the US southern border as its starting point; the first issue introduces two main characters, a Texas woman who owns a ranch right near the border, and is dealing with cartels and local law enforcement and Border Patrol agents, and a Honduran man who’s trying to get to the US and enter illegally. We follow their separate paths, and then at the end the “alien” part morphs into its sf meaning, as both are kidnapped by something like a flying saucer. Very well

thought out, with compassion for both sides of the migrant debate, and thriller-level enthralling (as you’d expect from the writer of Saga, Y the Last Man and Runaways, among others), while Martin uses the wider format to make the Texas, Honduran and sf-alien scenes starkly, and darkly, beautiful.  Analog is the second issue of Gerry (Deadpool) Duggan’s hard-boiled near-future tale about a world where everything on the Internet is automatically visible to anyone — so secrets have all had to move offline;  if you like tough-guy crime/suspense stories, it’s a decent-enough one, with the sf trappings adding a little spice.  Isola is an sf/fantasy comic, from Image, about a soldier in

a post-apocalyptic world who’s trying to protect her queen, who’s somehow been turned into a tiger. No word how yet with this second issue, but there’s gradual world-building, and Karl Kerschl, the artist and co-creator, draws some great-looking forest scenes — and wonderful-looking tigers, so it’s worth checking out. Prism Stalker continues to be a very Heinleinesque sf story about a young girl with latent psychic powers taken from her family and to a planetary training facility/school to learn how to use them in service to the empire; writer-artist-colorist Sloane Leong has a typical modern American/manga hybrid style, and uses it to good effect on his imaginatively-designed aliens and psychedelic color splashes.

Oblivion Song continues Robert Kirkman’s new series about a big chunk of Philadelphia getting transposed into another dimension/world, and the guy who, decades later, is still trying to find survivors — including his brother — and bring them back. This is the third issue, so it’s still easy to get the whole set — and, being Kirkman, there’s almost guaranteed to be a head-spinning narrative twist sometime in the first arc (see: Invincible), so this might be 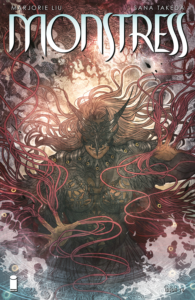 your last chance to get in on the ground floor. Maestros reaches its penultimate issue with universe-shattering consequences and surprises; Steve Scroce has some of Geoff Darrow’s obsession with detail, and it works well in some sprawling battle splashes, while his people poses are fine-lined and expressive: it’s just unfair that he’s good at the plotting and character parts, too, and this has been an attention-getting series for him. Monstress is rounding the turn 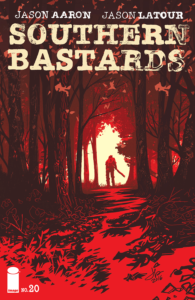 on its third arc (the first two, out in trade form, are good sellers), with Sana Takeda getting lots of chances to draw the multi-eyed, Lovecraftian entity that gives the title character her name;  her lush, high-fantasy manga style is a big reason for this book’s success.  Southern Bastards ends its fourth volume, after a number of delays; it’s been long enough that we’ll all have to dig out the last couple of issues to try to remember the plot and appreciate its payoffs, but its tough Southern noir (it’s like Friday Night Lights as written by Mickey Spillane) carries it along to a reasonably crowd-pleasing finish — at least for the moment.

With 40 years of experience in comic reading, collecting and reviewing, English Professor Phil Mateer has an encyclopedic mind for comics. Feel free to ask Phil about storylines, characters, artists or for that matter, any comic book trivia. He will post your questions and answers on the AABC blog. His knowledge is unparalleled! He is also our warehouse manager, so if you are looking for that hard to find comic book, ask Phil!
View all posts by Phil →
This entry was posted in New Comics, Reviews and tagged Analog, Barrier, Batman, Deadpool, Domino, Eternity Girl, Exiles, Isola, Maestros, Monstress, No Justice, Oblivion Song, Prism Stalker, Runaways, Sideways, Southern Bastards, Squirrel Girl, Venom, Wolverine. Bookmark the permalink.