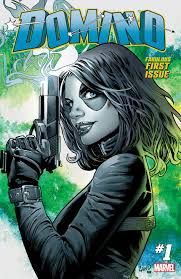 This week sees a couple of Marvel mutant debuts notable for their writers: Gail Simone’s combination of tough-guy noir, humor and themes about the weird support networks of friends and family that we build around us fits Domino perfectly; the luck-manipulating mercenary has seldom been this interesting, and David Baldeon’s slightly-demented J.

Scott Campbell riffs make it look good too.  Meanwhile, Saladin Ahmed, fresh off a year-long Black Bolt series that was both crowd-pleasing and surprisingly heartfelt, helms a revival of Exiles, whose multi-dimensional Mission Impossible team has to travel to various What If? timelines and put them right. A too-portentious three-page prologue is made up for by quickly introducing the focus character and team leader, the teleporter Blink, and sending her on a brisk round-up of alternate-universe versions of characters like Ms. Marvel and Iron Lad; Ahmed and Rodriguez, the penciller, make this a combination of Young Avengers and Suicide Squad, with a last-page reveal that suggests that it might be a lot of fun. For every beginning, an ending: Captain America 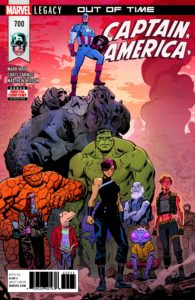 #700 sees the end of the Mark Waid/Chris Samnee partnership, one that’s stretched for six years through Daredevil, Black Widow and the last few issues of this title (Samnee’s contract is up and he’s a free agent; no announced plans yet, but, as Darwyn Cooke proved, his kind of sleek retro style works really well with DC heroes…); it’s their usual well-crafted story, the conclusion to the current time-traveling arc about Cap battling near-future American tyrants.  There’s also a ten-page tale by Waid using cobbled-together unpublished Kirby Cap pages, including a three-page fight with Batroc and a Red Skull page: a nice tribute to the King as Marvel celebrates his most iconic creation. 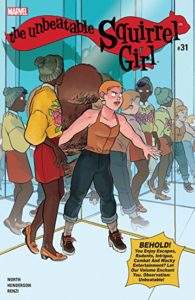 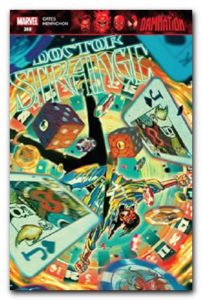 Squirrel Girl is a remarkable one-shot tale involving Doreen and Nancy getting stuck in hyperspeed, with the rest of the world slowed down around them like the Quicksilver scene in the Days of Future Past X-Men movie;  while the clever plot and slapstick humor are 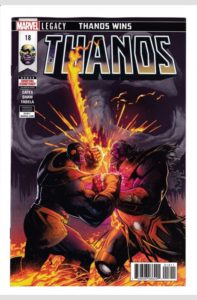 keeping you occupied, it quietly walks up and punches you in the heart, and then by the end heals it right back up again. Risk $3.99 on this comic; if it doesn’t get you buying Squirrel Girl, nothing will.  Donny Cates has two comics out this week:  Doctor Strange continues that Mephisto-in-Las-Vegas Damnation crossover, so it’s the product of a lot of diverse hands (although it’s got some of Cates’s personality, especially in the ghost-dog bits), while Thanos has been a more individual statement, and 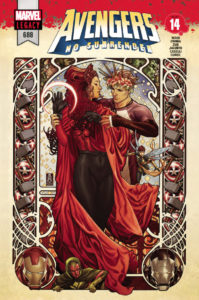 generated more buzz: his first six-issue arc ends here with the Titan battling his far-future self at the end of the universe, so you can’t accuse it of thinking small; the only problem’s going to be how to follow it in the next arc. Speaking of Quicksilver, Avengers, now winding down its sixteen-part weekly story crossing over all the Avengers personnel, spotlights the mutant speedster, as he sacrifices everything to give Earth the chance it needs, and to allow… well, all the Avengers to assemble, just in time for a really big fight; the issue-a-week format enhances the hurtling story, and makes it easy to wait for the next, and final, two issues over the next fourteen days. 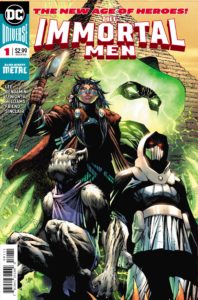 Immortal Men is one of DC’s “New Age of Heroes” debuts; it’s got partial Jim Lee art going for it (Ryan Benjamin, who collaborates with him here, will be the regular ongoing artist), and a new team of heroes, with the viewpoint character a prep-school kid 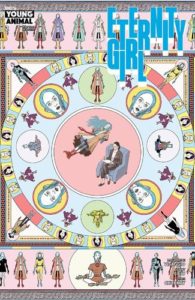 who’s apparently related to them; there’s a sprawling backstory that’s only hinted at: is that Vandal Savage as one of the  instigators, or just someone who looks like him — and here he’s sort of a good guy? And he has a sister? There’s a lot going on, including the slaughter of a whole race of “immortals” (although that term doesn’t seem to apply if they’re all, like, dead), so this first issue doesn’t work much as an actual self-contained story — but as the first chapter of the first trade, it might be OK; we’ll have to wait and see. Eternity Girl has a main character who, right now, is more villain than hero: she’s an energy construct, extremely powerful, but has self-esteem and identity issues, and just wants to die; however, the only way she can do that is by killing the whole universe. It’s weird and mopey, but in a good way, and helped 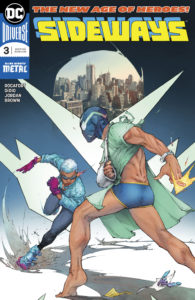 considerably by Sonny Liew’s precise, well-designed art; if this first story arc straightens her out enough to, you know, stop wanting to kill everything, it’s got potential. Sideways, with its high-school kid who’s lucked on to interdimensional/teleporting powers (he creates “rifts” and can step through them), and is both having fun with them and trying to use them heroically, is following an old comic tradition (see Spider-Man and, in DC terms, Firestorm); three issues in, we’re still in explore-the-powers and develop-a-rogue’s-gallery mode, and it’s still entertaining enough to justify continuing to read it. 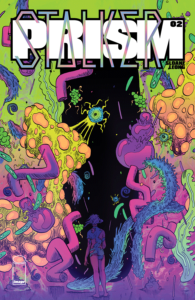 Cold War, and is now a sheriff in a small, peaceful, very isolated mountain town.  In suspense fiction, of course, places like that never, ever stay quiet, and this issue is no different: after it establishes his background and character, and the fact that he’s happy in his quiet life, it introduces some of the townspeople, and then adds a complication: a hiker who stumbles in, lost. That leads to a very effective last-page reveal that’s more than enough to bring me back for the second issue.  Gideon Falls is on its second issue, and so far

it’s a slow-building horror story , reminiscent of Stephen King’s “N”; there’s your OCD hero whose obsessions turn out to be more than just fantasy, your sympathetic psychologist who’s trying to treat him, and the gradually-revealed, looming Lovecraftian menace. Andrea Sorrentino’s art is realistic and quietly effective on the normal parts, and then opens up nicely on the horror ones, and of course Jeff Lemire (who’s moved out of the “hot new writer” and into the “seasoned old pro” category quickly) knows just which 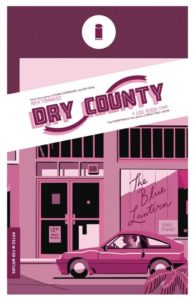 buttons to push to build the suspense.  Prism Stalker‘s second issue continues its classic-sf main character’s origin story: she’s a teen who’s been plucked from her home, a refugee planetoid, after showing psychic aptitude, and is now a student at an alien-filled academy that produces operatives to do wetwork for the planetary establishment in this part of the galaxy. Sloan Leong,  the writer, artist and colorist, is good at communicating the alien-ness and disorientation of her new environment, and this reads like the first few chapters

of a decent middle-period Robert A. Heinlein novel. Oblivion Song, Robert Kirkman’s new comic series, is sf too — ten years ago, a chunk of Philadelphia suddenly got transposed into another, very alien dimension; US researchers spent a lot of time figuring out how to get to it and rescue the people trapped there, and had some success, but now so much time has passed that there’s decreasing interest in using more resources to try and find anyone left — leaving one of the rescuers to try and keep looking mostly on his own, without government financing. De Felici’s art works well on both the human and the alien-dimension stuff, and as

with all Kirkman there’s effective characterization, interesting motivations and a slow-building, colorful cast; the first issue of this sold very well, and the second looks like it’ll continue that streak.  Dry County continues Rich Tommaso’s latest, a Florida-set undergroundish noir with a narrator whose new girlfriend has been kidnapped (maybe…) by an ex-boyfriend (maybe…); Tommaso’s last three series, Dark Corridor, She-Wolf and Spy Seal, were all worth reading, and this is no exception.  Barbarella gets a mention because Mike Carey makes the heroine such a matter-of-fact, unbeatable force of nature, and Deadly Class because it’s been such a high-energy pulp-movie interlocking-plotted bloodbath for the last six months, and isn’t over yet.

With 40 years of experience in comic reading, collecting and reviewing, English Professor Phil Mateer has an encyclopedic mind for comics. Feel free to ask Phil about storylines, characters, artists or for that matter, any comic book trivia. He will post your questions and answers on the AABC blog. His knowledge is unparalleled! He is also our warehouse manager, so if you are looking for that hard to find comic book, ask Phil!
View all posts by Phil →
This entry was posted in New Comics, Reviews and tagged Avengers, Barbarella, Captain America, Dead Hand, Deadly Class, Doctor Strange, Domino, Dry County, Eternity Girl, Exiles, Gideon Falls, Immortal Men, Oblivion Song, Prism Stalker, Sideways, Squirrel Girl, Thanos. Bookmark the permalink.