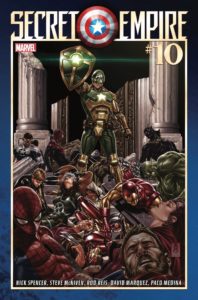 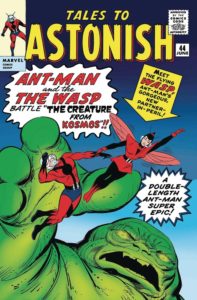 Secret Empire, although it’s had its bumps along the way, ends well, with a fight and a resolution that’s inspiring (the parts about never bowing to fascism and Nazis, especially, ring particularly true right now, and resonate especially keenly in the month of actual, literal Nazi fighter Jack Kirby’s 100th birthday), and not a reboot: the legacy characters like Jane Foster Thor, Riri Williams Ironheart and the Amadeus Cho Hulk remain, and we even get an explanation for all those “Vanishing Point” Generations team-ups. How this event will stack up to others in 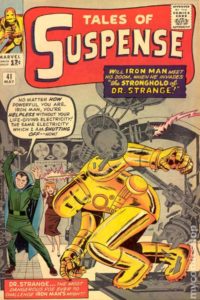 retrospect won’t be clear for a while, but I continue to be impressed that all eleven issues came out precisely on time: an encouraging sign for all of those renumbered “Legacy” books heading our way in a month or two (it’s easy to forget that the Jonathan Hickman Secret Wars, while it got deserved critical praise for its story, was so late that it caused a pile-up/delay in all the new comics coming out in its wake, and many of them never really recovered from it). Speaking of Kirby, the last two $1 reprints from his birthday centennial arrive this week, and they’re both from very early in Marvel’s Silver Age: Ant-Man and the Wasp reprints the seven-page origin of the incredible shrinking Hank Pym from Tales to Astonish #27, which appeared in 1961, along with the 1963 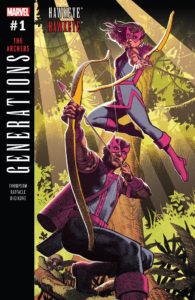 introduction of the Wasp, from TTA #44; Iron Man #1 wisely shies away from Shellhead’s often-reprinted origin in Tales of Suspense #39, and instead reprints the second and third stories, from #s 40 and 41, also in 1963. Everything but the Pym origin feature Don Heck inks over Kirby pencils, and, although they’re plotted by Stan Lee (with a great deal of input from Kirby, presumably), they’re scripted by lesser lights. Doesn’t matter — the power of Kirby’s art shines through easily, and energetically, and for $2 these are the usual bargain (those two Iron Man tales, especially, have seldom been reprinted, and are chock-full of beetle-browed cavemen, 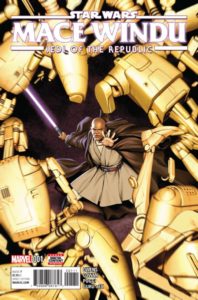 weird aliens and other wonders). Generations: The Archers sees Kate “Hawkeye” Bishop meeting Clint Barton in the past; it’s written by her current writer, Kelly Thompson, and has the usual cool snarky banter, plus lots of fighting and adventuring and humor; if it makes you want to read the current Hawkeye (and it should), then it’s done its job. Star Wars: Mace Windu is exactly what it says it is: a solo mini-series for that Samuel L. Jackson-played character; it’s one of those books that you’ve already decided to get (or not), so not much needs to be said about it — but it is good to see old pro Denys Cowan’s art again. 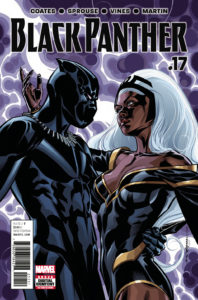 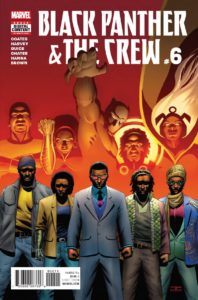 Two books this week from the Ta-Nehisi Coates Black Pantherverse: Black Panther #17, even though it’s in the middle of a longer story, has a clear narrative through-line (the first-page plot summary helps enormously), plenty of action and characterization, a good stopping point, and a number of fan-friendly bits (he’s repaired the Storm/T’Challa relationship nicely); if you gave up on this book during the maybe-too-much-worldbuilding first arc, this is a good time to check back in. Black Panther and the Crew also features the Ororo/Panther pairing, but this time set in Harlem, along with Luke Cage, Misty Knight and the teleporter Manifold. This is the last issue of the series, since sales were never very good; that’s too bad, because it was a thoughtful look at politics and protest and history in that community. Why the disappointing sales? Marvel could have marketed it 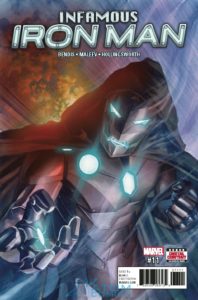 better — that group of characters has obvious tie-ins to Netflix’s The Defenders, and it’s not clear that many readers realized that — but it could have used more action and less philosophizing, too, at least until it had established a fan base, and scripts by an unknown-to-fans writer probably didn’t help, even with some nice-looking Butch Guice art.  Infamous Iron Man has been flying under most people’s radars, too, but this issue is worth a look: first, it guest-stars Doctor Strange, and the long astral-plane scenes between the two mystically-oriented docs has that Bendis dialog rhythm pop; second, there’s a great big penultimate-episode-of-the-arc reveal that upends much of what’s gone before, but was clearly planned from the beginning (I’m a sucker for those; I still remember the “Wait, Zorn is actually who?” moment from Grant Morrison and Frank Quitely’s New X-Men run). The Alex Maleev art was always a reason to get this comic, but if you were

driven away by the nothing-seems-to-be-happening last couple of months, this is the time to jump back in — and the next issue ought to be pyrotechnic fun.  Finally, Moon Girl and Devil Dinosaur deals with a sentient moon with daddy issues (because her father is Ego, the Living Planet), with all the usual kid-friendly intelligence and charming art; her saurian partner gets little to do, but the blurb for the next issue shows that’s only temporary (if you need another reason to buy this comic, consider the speculation angle: it only sells 7-8,000 copies in the direct market, but the trades do great business in schools and libraries; when all those kids grow up and want to find the original adventures, they’ll be legitimately rare…). 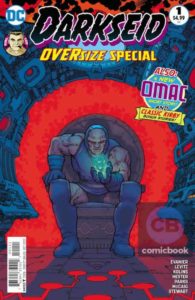 It’s interesting how Marvel and DC’s Kirby tributes this month have complemented one another: Marvel offering reprints of the raw original issues for only $1, and DC offering new stories of Kirby characters by other creators, with a few pages of actual Kirby art in the back –but for $5 each. Both approaches work — the Darkseid Special, for example, with its script by Mark Evanier (who was Kirby’s assistant back when he was originally creating the Fourth World books, and so knows their characters much better 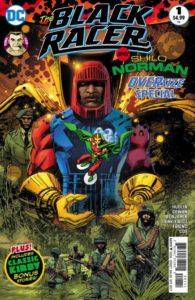 than most — and who wrote separate appreciations of Kirby for each of the other DC tributes this month, too) and art by Scott Kolins, which manages the delicate trick of reminding us of the King without imitating or homaging him; throw in a six-page Omac tale by Paul Levitz, Phil Hester and Ande Parks, and reprints of a four-page New Gods story and a six-page Tales of the Unexpected one from Kirby himself.  The Black Racer/Shilo Norman Special (Norman’s actually wearing the costume of Mr. Miracle, but maybe DC didn’t want to confuse fans of the new ongoing Tom King series with that character by naming him in the title…?), has a story by former Black Panther scribe (and, outside of the comics world, former president of the BET network) Reginald Hudlin, with art by Denys Cowan (when was the last time that two books drawn by Cowan came out in the same week?), but this time inked by Bill Sienkiewicz, and looking even better; the plot involves Shilo/Mr. Miracle answering a billion-dollar escape-from-death challenge by “casino king Travis Donald,” who’s drawn 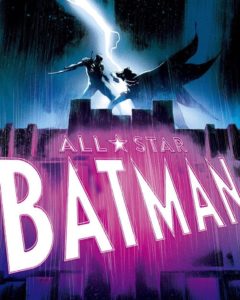 looking exactly like Donald Trump, only to have the death-avatar Black Racer show up, signaling that the stunt will kill him. Decent story and very nice art, with seven pages of New Gods reprints by Kirby to sweeten the deal. All-Star Batman offers the penultimate episode in Scott Snyder’s latest bat-story; it’s maybe a step down from the first two in this series (no flashy super-villains to jazz things up), but still worth a look, especially for Alfred fans, given its focus on that butler/father figure/ex-British military character’s earlier life and current relationship with Bruce Wayne; Albuquerque has a loose, expressive style (not too different from Denys Cowan’s, in fact) that makes it a smooth, easy-to-like read. 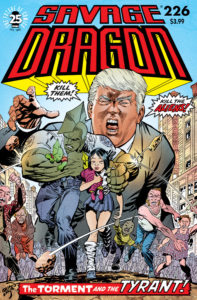 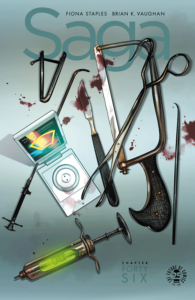 The Black Racer/Shilo Norman Special isn’t the only book to feature the likeness of Donald Trump this week; Savage Dragon puts him on the cover (as himself, or at least as the President of the US in Dragon’s world). If you remember Eric Larson’s generally-admiring Barack Obama cover and 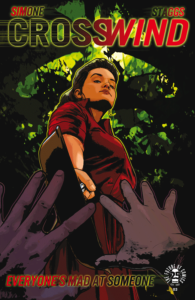 guest slot in this comic eight years ago… well, this isn’t that: Trump is the villain, whipping up his white-supremecist base to get aliens (actual aliens) like Dragon thrown entirely off the planet. Definitely not for Trump supporters, unless they’re hate-readers, or want to buy it as a potential investment (unlike President #44’s barrage of comics tributes, this is the only Trump cover on any comic since his election, as far as I know…).  Not much needs to be said about Saga; with 46 issues under its belt, it should be familiar to almost everyone by now. Get it to marvel at the strange, exotic, perfect Fiona Staples art, the twisty, jam-packed Brian Vaughan plot, and the usual didn’t-see- 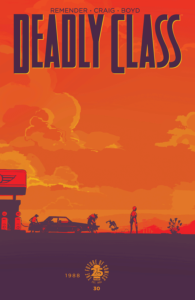 that-coming last-page splash. Crosswinds is only on its third issue, but its premise — a mob enforcer and a harried suburban housewife end up in each other’s bodies, thanks to some cosmic-karma tinkering — has been very readable so far, thanks to Gail Simone’s knack for dialogue, unexpected humor and deadpan violence, and co-creator Cat Staggs’s dark, painterly, well-composed pages. Watching the hit guy in the housewife’s body, calmly dealing with her mouthy teen, philandering husband and neighborhood high-school bullies, is the biggest attraction — but the housewife using her passion for paperback action thrillers to figure out just how to respond to the hit-man’s problems, and gradually 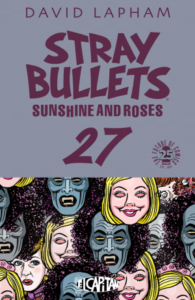 warming to the respect everyone gives him, is fun too. There are more crime/suspense thrills in Deadly Class and Stray Bullets, two other by-now-familiar comics (the former has been published for over three years; the latter first appeared more than two decades ago). Deadly Class is a high-school metaphor, not unlike Buffy the Vampire Slayer, except that instead of the everyday angst of that age being translated into killing immortal bloodsuckers, these kids have to deal with the perils of being assassins in training, with final exams just as deadly as the title implies; it’s a sleek, whipsawing ride, with reversals, resurrections 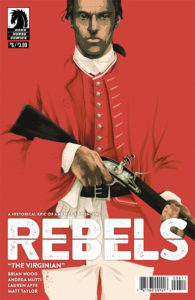 and unexpected heart. Stray Bullets is straight-up film noir, with a cast of dozens of characters, all rendered in David Lapham’s precise, clear black-and-white linework, and almost all doing self-serving, often-horrible things to one another. Rebels, a series of stories about the American Revolution, starts a new arc by jumping back to the 1750s, where a company of Virginian troops are in the Ohio Valley and commanded by a young lieutenant colonel named George Washington; it’s as fascinating and well-researched as the other books in this series, and a self-contained story that doubles as a painless history lesson; if you have an extra $4 to spend this week, it’s the smaller-press book most worth your time.

With 40 years of experience in comic reading, collecting and reviewing, English Professor Phil Mateer has an encyclopedic mind for comics. Feel free to ask Phil about storylines, characters, artists or for that matter, any comic book trivia. He will post your questions and answers on the AABC blog. His knowledge is unparalleled! He is also our warehouse manager, so if you are looking for that hard to find comic book, ask Phil!
View all posts by Phil →
This entry was posted in New Comics, Reviews and tagged Ant-Man, Batman, Black Panther, Black Racer, Crosswinds, Darkseid, Deadly Class, Generations Mace Windu, Iron Man, Jack Kirby, Moon Girl and Devil Dinosaur, Rebels, Saga, Savage Dragon, Secret Empire, Stray Bullets. Bookmark the permalink.