This week, for $3, less than the price of one new comic, you can get three, all by Jack Kirby: 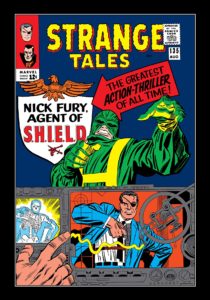 They form an interesting sequence, too: Nick Fury, Agent of S.H.I.E.L.D is from 1965, at the height of both the Silver Age and the ’60s super-spy craze; we watch 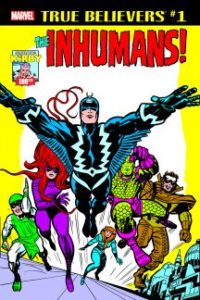 middle-aged, tough-as-nails WW II vet Fury (in his late 40s, just like Kirby) gets recruited by Tony Stark to head the title organization, a high-tech world espionage agency, and battle the shadowy, Nazi-like terrorist group Hydra (as Stephen Wacker notes in his introduction, there are concepts introduced here that still form the backbone of Marvel’s world, fifty years later).  Inhumans is from Amazing Adventures #1 and 2, from 1970, five years later; Kirby was credited as both writer and artist for these (one of the first times Marvel ever listed him that way) and they show the usual imagination, but the energy’s a little lower; compare the 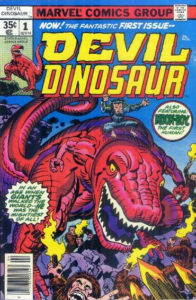 main art to the bonus material, pin-ups of the same characters that he’d drawn for Fantastic Four Annual #5, half a decade earlier, and see. Just a few months after these stories were originally published, Kirby would leave Marvel in a contract dispute and go on to create his Fourth World books for DC;  Devil Dinosaur is eight years later, after the DC experiment had — well, not “failed,” but ended — and the King had returned to the fold; the layouts have both simplified and expanded, all great clashing shapes: it’s got seventeen pages of Kirby giant-dinosaur battles, including a double-page splash on the second and third pages that’s worth the buck by itself. 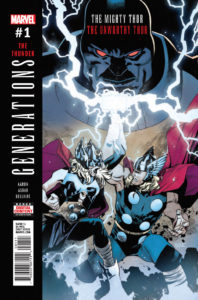 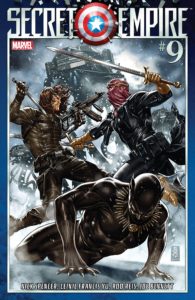 Generations: Thors has the advantage of being written by the regular title’s long-running author, which gives its meeting of the Jane Foster version with the younger, more-barbaric Viking-era Odinson more emotional weight; it’s also got a scene with Odin and another character that ties into the upcoming Marvel Legacy #1, making this the first of these one-shots to have a clear connection to current

Marvel continuity.  Secret Empire reaches its penultimate issue with the usual revelations, reunions, resurrections and reversals; who would have bet, when #0 was released back in April, that this thing would actually meet its deadlines and be done by September? Edge of Venomverse introduces the last of the alternate-universe versions of the symbiote — this time bonded, inevitably, with Deadpool —  before the big group mini-series begins next month. The art’s by James Stokoe, and a lot of people are going to look at it and, at first, 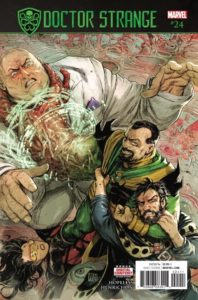 dislike it. When they look closer, and start to appreciate his offbeat horror-manga sensibilities, they’ll reconsider.  That leaves Doctor Strange, where Dennis Hopeless has had the unenviable task of place-sitting Doc with an under-the-dome Secret Empire crossover until the new Legacy version begins next month, and delivered a great job: a Strange/Baron Mordo battle involving Daredevil, Luke Cage, the Kingpin, and Spider-Woman and Ben Urich (for fans of Hopeless’s well-received but ultimately-cancelled run on Jessica’s own comic); it’s got some nice, just-offbeat-enough art from Niko Henrichon. 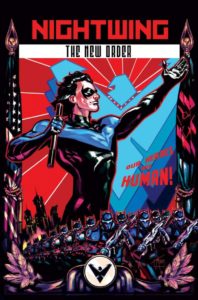 Nightwing: The New Order is one of those future-dystopian mini-series, like Injustice,  where the heroes have been defeated or altered; in this case, it’s because ten 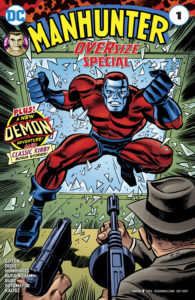 years from now, Batman gets himself killed and Dick Grayson/Nightwing decides to take away everybody’s super-powers so they can’t ever hurt anybody else. Has he spent the last decade hunting the stragglers down and imprisoning them/eliminating their abilities? Check. Does the public love him for it? Check. Is he convinced he’s doing the right thing? Check. Is the now-ancient Alfred trying to convince him otherwise? Check. Does he now have a teenage son, and does something happen to the kid on the last page that we can all see coming from a mile away? Check again. If you like this kind of “What If?” tale, or just like the Nightwing character, you should like this too, but otherwise the serviceable plot and art probably won’t attract many new readers. Manhunter is DC’s Kirby 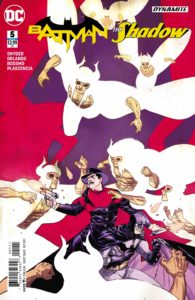 tribute for the week — as with their others, it’s mostly new stories building on Kirby creations, but there’s an all-star creative team: Keith Giffen and Mark Buckingham (with a script by Dan Didio, but you can’t have everything…) on a Manhunter story, and then a six-page Demon tale written by Sam Humphries, and with art by the great Steve Rude. The actual Kirby reprints only number nine pages — and, oddly, they’re random mystery and sf shorts, not even an actual Manhunter episode — but they’re also 1950s Kirby you’ve probably never seen before, and the new stuff really is good-looking, so this is still worth your time.  Batman/Shadow, after a couple of places in early issues where the plot required Batman to act like an idiot, has developed into a satisfying, adrenaline-fueled adventure; 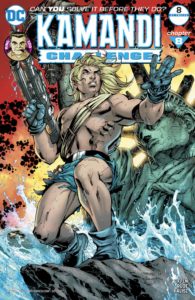 Riley Rossmo’s art continues to be a plus (every bat-artist’s big test is how they handle the Joker, and his lean, angular, grinning-madman one here gets high marks), and he has plenty of action to draw in this penultimate issue, with a double-page cliffhanger splash near the end to set up next month’s finale. Kamandi Challenge has been getting by on its art, too (Lord knows the tag-team writing doesn’t lend itself to any kind of clear, linear plot), and this issue spotlights Steve Rude, who could be the love child of Alex Ross and Darwyn Cooke; his odd-couple combination of Ross’s photo-realism and Cooke’s streamlined simplicity has given him a unique style since his early Nexus days, and it looks particularly good with all the weird settings and characters on display here. 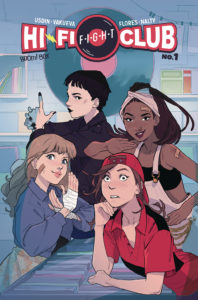 Hi-Fi Fight Club is about a secret teen girl vigilante fight club that operates out of a vinyl-record store staffed with young music fanatics (this isn’t actually revealed until the last page of this first issue, but, c’mon, it’s right there in the title…); the hidden-society stuff and hints of magical 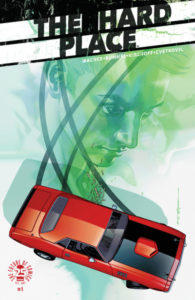 realism, plus the diverse characters and YA elements, make it a typical Boom! title (it’s got a less cartoony and more American/manga hybrid style than, say, Lumberjanes or Backstagers, but it’s a spiritual cousin to them), and while this first issue is mostly character- and world-building, it shows a lot of potential — provided that you’re a fan of some of those other books, too. The Hard Place is a noirish crime thriller about a former getaway driver just out of jail and struggling not to get pulled into the life again; Nic Rummel’s art, which reminds me of a cartoonier, less-detailed Eduardo Risso, works well with the hard-boiled, coincidence-heavy plot, and, while it’s nothing at all like Hi-Fi Fight Club, the same recommendation applies: if you 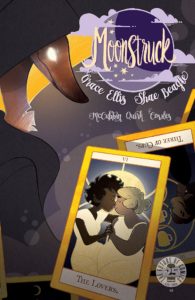 like its genre, it’s a decent, entertaining example of it. Moonstruck is from Image, but could easily fit at Boom! with Hi-Fi Fight Club and the other YA books — it’s got characters who act like modern 20-somethings in a place that could be Seattle, except that they’re all magical/supernatural beings like werewolves (hence the title), centaurs, gorgons, etc., drawn in a charming cartoony/animation style with great coloring (especially in a sequence with a trickster fox magician), and the usual casually-accepted diversity and combination of humor, adventure and relationship drama: again, if that’s a style you’re attracted to (and why not?), then you’ll like this comic. 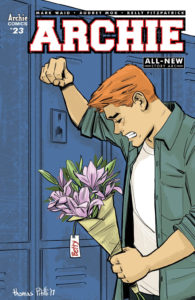 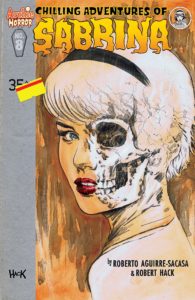 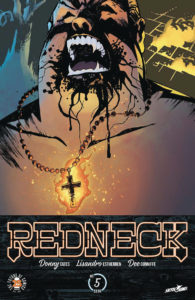 Of the more-established indies, Archie concludes its serial about Betty getting in a car crash (thanks to a Reggie/Archie drag race) and ending up in a wheelchair (they’d hinted at a death, but if you actually thought they were going to kill her, I have some ocean property in Yuma you might be interested in…); Waid continues to mix slapstick and sentiment effectively, 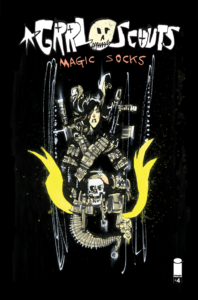 although just a little drama with characters like these goes a long way. Chilling Adventures of Sabrina, as a horror comic, goes entirely to the drama side — in fact, its main weakness is its humorlessness — but its early-Coen Brothers-like cast, all with secrets and all working at sometimes-unknowing cross-purposes to one another (and sometimes themselves), is fascinating, and Robert Hack’s art is very good at hitting the sweet spot between too cartoony, too realistic and just enough of each; an Archie Elseworlds comic sounds like a tough sell, but whatever this is, it’s fun 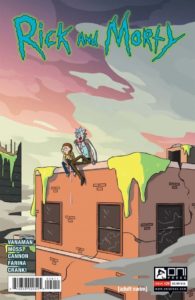 to read. Redneck is getting toward the end of its first arc (and, maybe, its only one, if writer Donny Cates is exclusive at Marvel now), and its modern-day Texas-vampires murder mystery has a couple of revelations, including one big twist, and the usual well-drawn violence and moonlit atmosphere. Grrl Scouts #4 sees creator Jim Mahfood even more psychedelic than usual (Daphne, one of the title crew, is dead, and her afterlife spirit guide is Hunter S. Thompson, in full Ralph Steadman Fear and 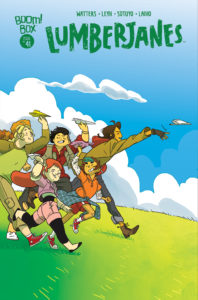 Loathing mode); it’s a transitional chapter, so not the best place to jump in, but get the three earlier issues and read them first, and see if you don’t get hooked on this former Valley resident’s cool world of sex, drugs, assault weapons and mysticism. Rick and Morty is as dependable as ever: smart, cynical, darkly hilarious and mean-spirited with, every once in a while, a touch of actual heart.  This issue, with timing that’s accidental but fortuitous, is all about killing Hitlers — about a thousand of them; what more do you need to know?  Lumberjanes was the first successful prototype 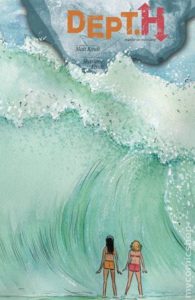 for all those other YA books we’ve been discussing, and this week’s issue shows why: subtle STEM points about girls working science and about making the perfect paper airplane, mixed in with themes involving problems with parents, with friendship and with responsibility, all in service to a plot about a trickster being and a growing supernatural menace, all masterfully told. That leaves Dept.H, with Matt Kindt revealing some major clues about its murder mystery (and actual bad guy), along with the usual delicate underwater imagery and wife Sharlene Kindt’s cool pastel-watercolor coloring: an airy, light chaser after the rest of this week’s comics.

With 40 years of experience in comic reading, collecting and reviewing, English Professor Phil Mateer has an encyclopedic mind for comics. Feel free to ask Phil about storylines, characters, artists or for that matter, any comic book trivia. He will post your questions and answers on the AABC blog. His knowledge is unparalleled! He is also our warehouse manager, so if you are looking for that hard to find comic book, ask Phil!
View all posts by Phil →
This entry was posted in New Comics, Reviews and tagged Archie, Batman, Dept.H., Devil Dinosaur, Doctor Strange, Grrl Scouts, Hi-Fi Fight Club, Inhumans, Jack Kirby, Kamandi, Lumberjanes, Manhunter, Moonstruck, Nick Fury, Nightwing, Redneck, Rick and Morty, Sabrina, Secret Empire, Shadow, The Hard Place, Thor, Venom. Bookmark the permalink.