In a week that sees the debut of two major X-books (well, one and a half…), Black Panther and the Crew #1 leads off because, despite its title, it’s a Misty Knight/Storm teamup in New York City that’s a valentine to the Chris Claremont-era Uncanny X-Men. Coates was facing huge

expectations when he took over the regular Black Panther series last year, and the first couple of issues showed it, but every new one was better than the last, and the conclusion of the first big story in issues #10-12 was confident, smart and smooth. That carries over to Black Panther and the Crew: above all, it’s a fun superhero story, by someone who’s a fan of those 1980s strong-women Claremont comics, and it’s relaxed and knows just who its two leads are, and how to play them off against one another, and how to apply its serious themes in service to the story, instead of the other way around. Throw in the Butch Guice art, and it really is the best X-Men comic of the week. X-Men: Blue isn’t bad, mind you — it’s the five original X-Men, brought to the present day while still in their late teens and stuck here;  if you were buying the original 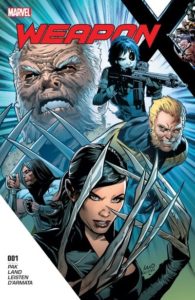 2012 Bendis/Immonen series or its sequel, you’ll want this.  Bunn says in the editorial material that he’s aiming for a combination of the original Lee/Kirby energy and the best of the later eras; that’s a tall order, but this first issue mixes in some of the bright optimism of books like Squirrel Girl or The Unstoppable Wasp, too, so maybe it’ll attract some new readers. Weapon X, like Black Panther and the Crew, only features two of its team in its first issue: Wolverine, who has to fight off some stabby Terminator 2-type robots, and Sabretooth. It’s a good story if you like Wolverine/Sabretooth stories, and artist Greg Land is decent at drawing the stabby-robot stuff, so this is worth a look. 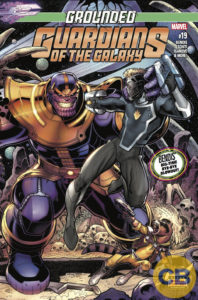 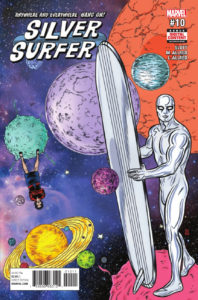 Guardians of the Galaxy #19 is a double-sized swan song to Brian Michael Bendis’s years-long run on the title, with the various members of the cast, stranded on Earth and scattered over the last few months, regathering to fight an invasion by Thanos, and showing just what makes each of them such a bad-ass, and why they work so well together as a team; it offers a satisfying ending as it puts all the toys back in the box for the next creative team, just in time for the movie. Main artist Schiti has the unenviable job of making dozens of characters, fighting in crowded action scenes, look

good, and accomplishes it well; he’s helped by an all-star cast of guest artists, including Art Adams, Kevin Maguire, Sara Pichelli and Mark Bagley, and with all the splash and double-splash pages, this comic is a lot of visual fun, and a fitting conclusion. Silver Surfer offers a stand-alone story that’s a perfect example of the book’s trippy aesthetic: plots that are both cosmic and surprisingly romantic, wonderful Allred art and coloring, and a feel-good conclusion; if you haven’t been reading this comic, this issue ought to convince you to start. Surfer writer Dan Slott also contributes the script for this week’s Amazing Spider-Man (as he’s been doing for over six years now), and it shows his versatility: where Silver Surfer is psychedelic and new-agey, Amazing Spider-Man is very accomplished, straight-ahead superhero 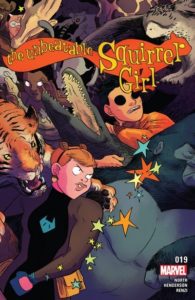 storytelling, with Spidey teaming up with (and sometimes against) Silver Sable in a big battle with Norman Osborn: it’s got exactly the combination of ongoing sub-plots, action and characterization that have always made the ol’ wallcrawler work so well. That leaves Unbeatable Squirrel Girl and Unstoppable Wasp, two members of Marvel’s burgeoning Young Adult/Scholastic stable that share strong, college-age female leads who solve problems through a combination of brains, ability and confidence (right down to those imposing adjectives in their book titles); they also share clear, brightly-colored art, humor (Squirrel Girl, especially; writer Ryan North has mastered a break-the-fourth-wall narrative tone that pull readers in and makes them accomplices to all the fun) and themes that 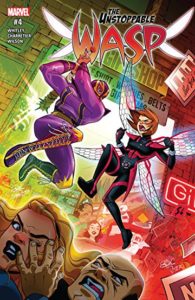 manage to teach the importance of talking through conflicts, and respecting other people’s opinions, even as they also involve lots of leaping and kicking and punching for when that other stuff doesn’t work (Wasp offers a five-page fight sequence that’s also a running narrative commentary on Krav Maga self-defense techniques). There’s a lot of high-quality storytelling here (we haven’t even covered Squirrel Girl’s amazing, idiosyncratic Erica Henderson art), and it’s got a refreshing, determined optimism that makes it appealing to all readers — but if you know any girls between the ages of ten and twenty, especially, buy them these books, and you might be creating lifetime comics fans. 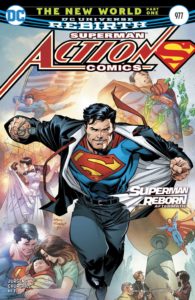 The Superman titles this week play off the end of the previous issue of Action, #976, which did nothing less than reset the DC universe, wiping out/modifying the whole New-52 history and reintegrating it with the “old” timeline.  Action #977 starts with a demonstration of the new/old status quo, and also has 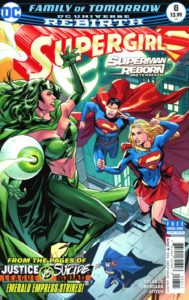 the Man of Steel reliving his  origins, from his rocket launch on Krypton until now.  It also foreshadows the next crisis, as a mysterious figure is running around gathering Super-enemies and enhancing them. Supergirl takes up the first half of its story with a Superman/Supergirl conversation that does much the same thing for Kara: it integrates her story with the “new” timeline, establishes exactly what her relationship with Superman is, and acts as a jumping-on point for all future episodes; if you haven’t tried her TV-show-centric relaunch yet, this is a good place to start. 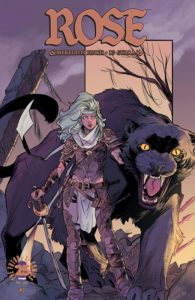 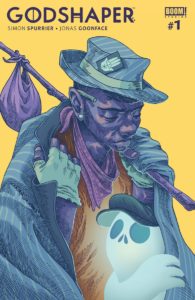 Of the indy titles this week, Rose #1 is a fantasy series involving a young woman who has magical talent 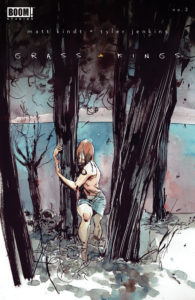 (which somehow involves big cats — called “khatz” –as familiars), and an evil queen who’s banned all magic, and wants to hunt her down and eliminate her. Okey doke — if you like that kind of thing, it’s serviceable enough, especially with the Ig Guera art, and there’s enough world-building in this first issue to suggest that, given time, it might develop into something cool.  Godshaper is another fantasy, set on an alternate earth where, in the late ’50s, everyone suddenly got a personal god — glowing animal avatars 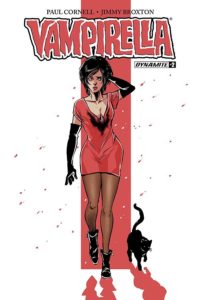 that get bigger or smaller, and more or less powerful, depending on their person’s wealth and status: rich people have great big gods with lots of abilities, while poor people have tiny ones who can’t do much. Then, there are the godshapers — rare people born without their own gods,  which means they lack any wealth or status at all — but who have the ability to mold and shape the gods of others. This is all worked out smartly by Simon Spurrier (who made X-Men: Legacy into a critical, if not commercial, hit, enough to be the

backbone for the Legion TV series), and visualized with a combination of caricature and drama by Jonas Goonface; it’s another book with an extensive backstory, and one worth sticking around to see how it develops. Grass Kings continues Matt Kindt’s new series about a coastal freehold where a community of outlaws lives in uneasy truce with the county authorities (who don’t quite have the legal authority to kick them out); typically for Kindt, it’s got flawed characters facing down government conspiracies and bureaucracy, looking to redeem their pasts and do the 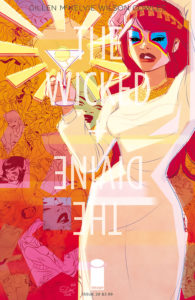 right thing; Tyler Jenkins’s delicate watercolor art gives it a dreamy, offbeat tone. Vampirella sees its sort-of heroine in the far future, adjusting to a society that’s melded religion and consumerism and battling the powers that be; her modern haircut and fashion sense distinguish her from the ’70s/’80s Warren wetdream version, and signal that her creators are going for an audience other than horny teenage boys — probably a good move in today’s female-centric, YA market. Circuit Breaker concludes its Osamu Tezuka pastiche, with the Kyle Baker art being all the incentive you should need to check it out, while The Wicked and the Divine ends its latest arc with a graphic demonstration 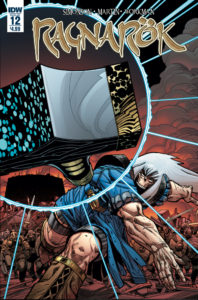 of why you don’t want to get Sakhmet angry or embarrassed, and especially both; it’s in that rounding-the-turn phase of a long story, where the ending is still a ways off, but forces are gathering and the outlines of the whole thing are becoming clearer, and offers the usual Gillen/McKelvie  combination of compelling story and attractive art. Ragnarok is Walt Simonson doing Thor with no corporate filters or restrictions, and is worth your time because he’s a master storyteller working on some of his signature themes and characters; the eight-page process gallery, looking at how a couple of this issue’s pages developed, would be of special interest to aspiring artists.

With 40 years of experience in comic reading, collecting and reviewing, English Professor Phil Mateer has an encyclopedic mind for comics. Feel free to ask Phil about storylines, characters, artists or for that matter, any comic book trivia. He will post your questions and answers on the AABC blog. His knowledge is unparalleled! He is also our warehouse manager, so if you are looking for that hard to find comic book, ask Phil!
View all posts by Phil →
This entry was posted in New Comics, Reviews and tagged Black Panther and the The Crew, Circuit Breaker, Godshaper, Grass Kings, Guardians of the Galaxy, Ragnarok, Rose, Silver Surfer, Spider-man, Squirrel Girl, Supergirl, Superman, The Wasp, Vampirella, Weapon X, Wicked and the Divine, X-men. Bookmark the permalink.