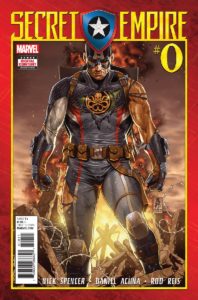 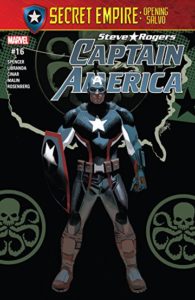 Whether we all really want to read about a fascist takeover of the U.S. by a nationalist-themed sociopath and his cartoonish super-villain flunkies right now is a good question, especially in a ten-episode mini-series with line-wide tie-ins, but as such things go Secret Invasion #0 is actually pretty good: using a cosmic cube to retcon Captain America’s origin so that he was always a sleeper agent for Hydra means we get to see 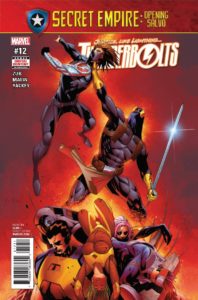 the world’s greatest combat strategist cold-bloodedly isolate and defeat his various opponents, and consolidate his command (it’s Marvel’s equivalent of a “What if Batman turned bad?” story). Writer Nick Spencer does a decent job with the strategy-and-tactics stuff, a key to making all of this work; he’s also the writer of Steve Rogers: Captain America #16, which wraps up more of Cap’s “new” origin, takes a major player off the board and dovetails neatly into Secret Invasion #0. Both Thunderbolts #12 and U.S.Avengers #5 should be read before either of those

books; Thunderbolts concludes its run with a resolution involving the Kobik/cosmic cube character that has major ramifications for the big story, while U.S.Avengers features maneuvering between a not-yet-outed Rogers and the title group, now part of the U.S. government and under his control. Taken together, these books produce a satisfying chunk of story that lays a solid foundation for the event; now, if Marvel can actually produce an issue of it every two weeks between now and the end of August, and keep it moving briskly and not have it stall out and drag on to Christmas…. 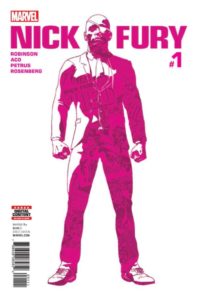 Nick Fury is aiming to be both Sterankoesque and Flemingesque, as it combines the bold graphic design 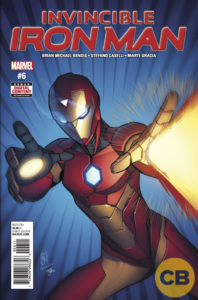 and psychedelic coloring of Jim Steranko’s original ’60s run on the character with the James Bondish super-spy influences that were always at its heart, from the elaborate gadgetry to the French Riviera casino setting to a bad guy named “Auric Goodfellow,” who’s of course a tribute to Auric Goldfinger of the same-named Bond novel and movie (there’s no female supporting character named “Pussy Galore,” though, which might have been problematic…). Refreshingly, this is not the beginning of some six-part written-for-the-trade origin, but a single-issue mission, fast-paced and complete, that showcases both its title character’s  and creative team’s talents convincingly: exactly what a 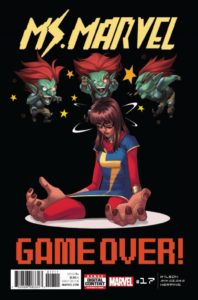 first issue should do. Iron Man continues to introduce its new suit-wearer, Riri, to the rest of the Marvel universe, as she tours the Stark laboratories (where her geeky fangirl background comes out), interacts with the supporting cast (including the AI version of Tony Stark), gets offers from a number of different organizations, and even manages a bit of super-heroing; the Bendis/Caselli team makes her appealing through both the dialogue and the visuals, and reinforces this comic as one of the better new-generation Marvel relaunches. Ms. Marvel is in that company, too, as it completes a trilogy whose villain is a literal internet troll, whose defeat requires our heroine to rally her online-gaming community to attempt the seemingly-impossible task of making the 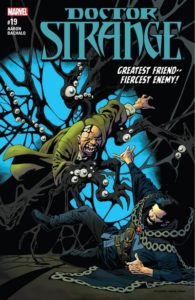 internet “nice.” It’s a clever gimmick with some sly digs at online comics commentators, with a clear but not too overbearing theme, drawn in Miyazawa’s attractive and open style: an good example of the qualities that have made this book such a YA success. Doctor Strange, meanwhile, concludes the story that it’s been telling since its relaunch, as Doc has to battle a Wong possessed by his own magic-generated misery; the Aaron script has both humor and heroism (with Strange’s subtle martyrdom at the end, especially), and the Bachalo pencils are, as always and even despite all those inkers, beautiful to look at. 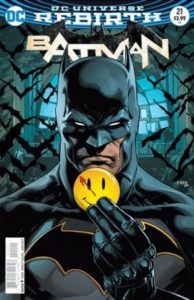 Batman #21 is the most-anticipated DC book of the 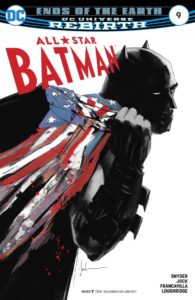 week, with its Watchmen-inspired 3-D cover that merges the images of Batman and the Flash (and signals that the second part of the story will be in next week’s Flash #21), and an issue-long battle between the Dark Knight and the major Flash Rogue’s-Gallery bad guy; as always with scripter Tom King, it’s smart and fast-paced and loaded with fan-friendly sequences, while giving artist Jason Fabok lots of opportunities to show off his skills: two splash pages and one double-splash, even as most of the rest of the story is told in the nine-panel page grid that the original Watchmen made famous (a perfect example of King being both clever and fan-friendly…). All-Star Batman sees DC’s other great Batman writer right now, Scott Snyder, concluding his second arc on that title; the art, by Jock, is predictably good-looking, 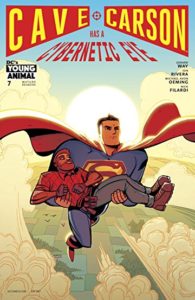 and the final battle with the revealed mastermind (one that will elicit a “Him? Again?” from a lot of fans, the comic’s one flaw) is effective. There’s also the conclusion of the Duke back-up story, drawn by Francesco Francavilla, that turns out to lead directly into Snyder’s next Great Big Bat-Event, Dark Days, giving DC junkies yet another reason to buy this comic. Cave Carson offers mostly a hallucinatory flashback to an encounter between Cave and Superman (man, that Oeming cover, colored by Nick Filardi, makes the Man of Steel look Golden-Age good — and, since they provide the interior art, that sharp-looking Supes is on the inside, too), and then has him wake up, a week after the events in the previous issue, to see just how bad 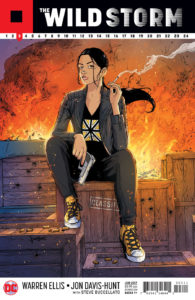 things have gotten in his absence (the answer is: Lovecraftian elder-god bad…); it’s an effective breather issue, and a decent example of this series’s weird, offbeat fun. The Wild Storm continues Warren Ellis’s reconstruction/reboot of the Wildstorm characters, with the WildC.A.T.s battling IO to save the life of Angie Spica; it’s the same high-quality techno-espionage thriller that we’ve come to expect from Ellis.  Those characters have had a number of unsuccessful relaunches over the last decade or two, but he seems committed to at least two years on this project, and if anybody can re-spark interest in them…. 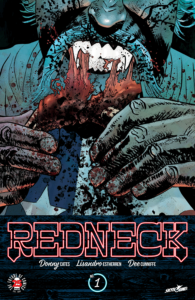 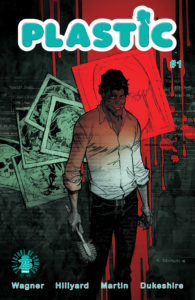 Redneck is basically Southern Bastards with vampires; its viewpoint family lives on a farm in the woods outside of an East Texas small town and drinks cow blood, determined not to be as monstrous as the other members of their tribe… but then, of course, a couple of the younger ones decide to go into town for a night out, and the locals are worse than the vampires, and one thing leads to another and pretty soon it looks like there’s going to be an awful lot of blood spilled by one side or the other. Cates has a good sense of pacing and character, and the theme of trying to do good despite evil influences is a powerful one; the art’s both suitably shadowy and effective at the good-ol’-boy caricatures required, and 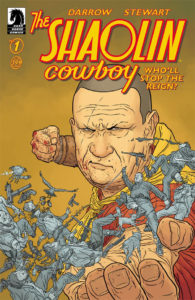 this does its first-issue job of establishing the setting and cast, and stopping right at the point where things get interesting, to bring readers back for more.  Plastic is a hard-boiled crime tale about an ex-government spook with deadly skills, who’s gone out of his mind and off the grid, and is wandering around the country with his romantic interest: a blow-up doll named Virginia (presumably the “plastic” of the title); this book’s got a nasty sense of humor and an unblinking, matter-of-fact approach to violence that makes it entertaining enough to deserve a second issue. Shaolin Cowboy is the return of Geoff Darrow’s western-wandering martial-arts monk; this first issue has less action than the last mini-series (not surprising, since 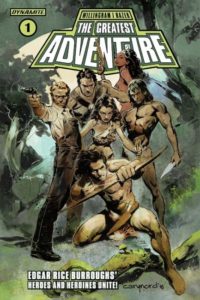 that arc mostly involved page after page of the cowboy slaughtering thousands of zombies in Darrow’s obsessively-detailed style), but sets up a big fight for next time, and is good at reminding us what we’ve been missing in the years since it’s been gone. The Greatest Adventure features writer Bill Willingham (Fables) doing an Edgar Rice Burroughs mashup involving Tarzan, Korak, Jane, John Carter, Dejah Thoris and a few others setting off on a quest; you’re either excited by that lineup or you’re not, and if you are you’ll like Willingham’s matter-of-fact, practical approach to adventuring strategy and tactics. 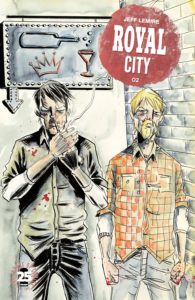 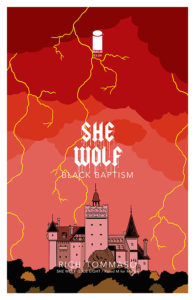 Royal City continues Jeff Lemire’s slice-of-life tale about a blocked writer returning to the town where he grew up, where he and the other members of his family are still haunted by the tragic loss of a younger brother years before; Lemire’s unique style and senses of 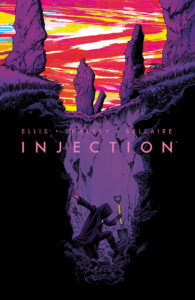 character and place make it fascinating. Rich Tommaso’s got a unique style, too (doesn’t everyone? But his is bold and colorful and good-looking), both more cartoony and more underground-influenced than Lemire’s, and it fits She-Wolf‘s pulpy mix of a seemingly-normal girl who ends up involved with werewolves, demons, vampires and magical barbarian dimensions like a bloody glove.  Here, he offers a satisfying conclusion to this volume of the title, 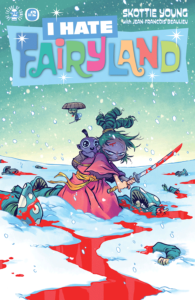 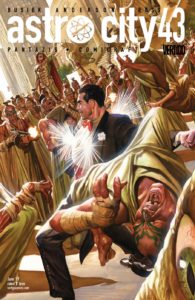 poignant way that’s presented is exactly why it’s such a great comic…).  Injection is in the middle of an English countryside/Stonehenge-like structures/burial mounds/barrow wights/spriggans story; if you liked that Warren Ellis/DeClan Shalvey run on Moon Knight a couple of years ago, this is a good jump-on opportunity to see what they’ve been up to since then.  I Hate Fairyland offers a Lone Wolf and Cub parody, with Gertrude trying to do good by rescuing a baby from its captors, with predictably-dark, cynical and funny

results. Astro City is a kind of history of The Gentleman, plus the return of Break-The-Fourth-Wall Purple Guy: even more offbeat than usual, but roll with it; after a couple of decades together Busiek and Anderson are incapable of creating a bad issue of this series. Dept.H has Matt Kindt, as determinedly-unique as Jeff Lemire and Rich Tommaso, continuing his deep-underwater detective tale; it’s at that point where, if you’re new,  it’s better to read the first couple of trade collections than start here, but its claustrophobic and increasingly-catastrophic plot elements make it worth the effort.

With 40 years of experience in comic reading, collecting and reviewing, English Professor Phil Mateer has an encyclopedic mind for comics. Feel free to ask Phil about storylines, characters, artists or for that matter, any comic book trivia. He will post your questions and answers on the AABC blog. His knowledge is unparalleled! He is also our warehouse manager, so if you are looking for that hard to find comic book, ask Phil!
View all posts by Phil →
This entry was posted in New Comics, Reviews and tagged Astro City, Batman, Captain America, Cave Carson, Dept.H., Doctor Strange, I Hate Fairyland, Injection, Iron Man, Ms. Marvel, Nick Fury, Plastic, Redneck, Royal City, Secret Empire, Sex Criminals, Shaolin Cowboy, She Wolf, The Greatest Adventure, The Wild Storm, Thunderbolts, U.S. Avengers. Bookmark the permalink.