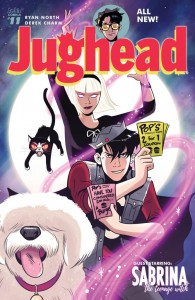 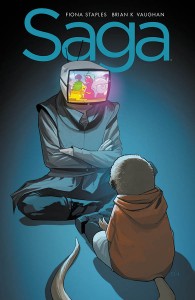 The non-Marvel and DC books seem to float to the top of my pile lately; they’re the ones I want to read first, because they move in unexpected directions than, and offer styles different from, the same old people in Spandex punching one another (not that there’s anything wrong with that…). Jughead, for example, concludes a three-part crossover between the title iconoclast and Sabrina, the teenage witch, wherein the latter gets a job dressed up as a giant burger passing out coupons in front of Pop Tate’s,

and the former, smitten with her costumed persona, chats her up and they eventually go on a date, which ends as badly as you might guess and leads to magic being used for comical revenge and backfiring spectacularly. This is all written very cleverly by Ryan North (Squirrel Girl), with a resolution that’s surprisingly warm-hearted and adult; the art, by Derek Charm, uses the new more-realistic but still-cartoony Archie house style, and the whole thing is just charming and fun and very well put-together.  Saga started out as a science-fictional take on Romeo and Juliet, and has morphed into a sprawling space opera populated by dozens of fascinating characters whose lives intersect in startling ways; Fiona Staples’s art handles them all with confidence and skill, from

the heartbreaking and uplifting little character bits to the double-page cosmic splashes to the cliffhanger twists at the end, and it’s easy to see why this series has made it to 40 issues (and six trade collections) and developed such a devoted fan base. Monstress is high fantasy presented in a lush manga style; its artist, Sara Takeda, is just as skillful and confident as Staples, and Marjorie Liu’s tale of a halfbreed fugitive with a Lovecraftian elder god inside her has ended up on a lot of best-of-the-year lists. This episode starts a new arc and sees its title character on a ship populated by outcasts, rebels and monsters; it’s an effective jumping-on sampler for new readers.  There are also a pair of books written by former Phoenician (and AABC customer) Rick Remender; Deadly Class would be an angsty high-school relationship comic, set in 1988, except that the high

school is a training ground for young assassins from around the world, and each new freshman class has a number of sacrificial lambs who are training fodder for the others; sharply-drawn characters and unexpected twists keep it fresh and energetic, and out of all the comics this week it was the one that I wanted to read first. Seven to Eternity is set in a country on an alien world whose ruler, called the God of Whispers, holds on to power by whispering half-truths and lies in the people’s ears, seducing them and getting them to betray their ideals with illusions and scapegoats (insert your own political joke here); Opena’s detailed drawings make even the most fantastic elements of the world believable, and he has a number of great-looking panels, including a full-page splash that’s startling and wonderful. This third issue concludes the overall story’s first arc, and 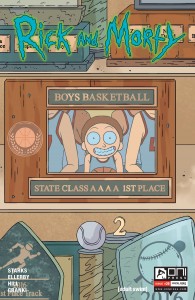 sets its title group on what promises to be a long adventure- and peril-filled quest; read all three, and see if you aren’t committed to making the journey with them. Finally, Rick and Morty is based on the Adult Swim TV cartoon about a good-hearted high school kid and his perpetually-drunken grandfather, an inventor who’s also a multiversal rogue, con-man and conqueror, and it’s always dark, cynical fun with just a glimmer of humanity at its core; Kyle Starks does the lead story in a broader, more primitive visual vein than usual, with thicker lines and more child-like layouts, while Marc Ellerby’s shorter, Santa-themed backup tale is closer to its normal style — “normal” being a relative term in a book as gleefully-anarchic as this comic.

Now we come to the books that do involve people in Spandex punching one another — and, in fact, Inhumans vs X-Men is exactly that, although this “0” issue actually has no fisticuffs at all; it’s a setup for what will presumably be a whole 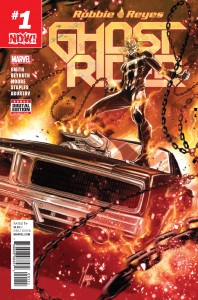 bunch of punching in the actual series, though, bringing us through the eight months between the “death” of Cyclops in the Death of X mini-series to the right-now Marvel universe. Of the two parallel plotlines, one has the Beast working in Attilan to cure the deadly effects of the Inhumans’ terrigen cloud on mutants (he starts out confident in the power of science to solve the problem, and gets increasingly discouraged as it proves more and more difficult), and the other tracks Emma Frost as she makes careful, subtle preparations to achieve two goals: the destruction of the very-well-defended terrigen  cloud, and revenge on the two lead Inhumans, Black Bolt and Medusa, for causing Scott Summers’s death. Soule does a good job of making Frost formidable, and downright fascinating, in her grandmaster-like manipulation of various people and events, while Rocafort’s very detailed art (he uses the opposite of a simple, clear line, with lots of  little sketchy embellishments and flourishes over everything, something like Leonil Francis Yu) works well at making both the shaggy-maned 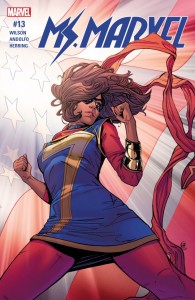 Beast and the diamond-skinned Frost appealing; as a setup to make us want to read the event itself, this does its job well. Ghost Rider, the week’s other debut issue, continues the most-recent iteration of the character, Jamie Reyes, so it’s set in east LA, he drives a souped-up car instead of a motorcycle, has a glowing helmet instead of a flaming skull, is cursed by his dead evil uncle instead of Satan, and so on (to readers who remember being attracted to the ’70s original series because of the flaming skull, the cool motorcycle, and the pact with the devil, these may seem like strange choices, but maybe that’s just age…). This first issue interweaves three separate stories: Jamie with his handicapped younger brother getting minor revenge on a bully, the Amadeus Cho Hulk encountering a metemorphing, menacing little creature, and yet another pair of guest stars having lunch at a roadside taco stand; these threads almost come together, but won’t actually do it until next issue. I’m not sure how this will all go over with completely-new readers; it scans more like a Hulk comic than anything else, and has little 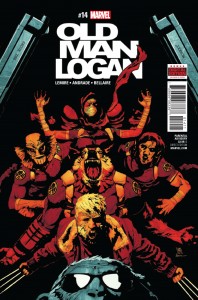 display of what its actual lead character can do. Fortunately, there’s a ten-page back-up story, with art by Tradd Moore, that involves a new villainess boosting Jaime’s ride, leading to a pyrotechnic chase scene between her and the Ghost Rider, that does  much more to showcase his talents than the main one does, so maybe that will bring the newbies back. Ms. Marvel offers a stand-alone election story, involving Kamala’s town having to choose between an incumbent mayor who’s OK but establishment and boring, and a newcomer who’s evil but, thanks to Dr. Faustus, manipulating the apathetic electorate into voting for him (Ms. Marvel, at one point, says “So I’ve got to convince people to choose between an incumbent nobody likes and a fringe candidate working for a secret society of evildoers?” A little too on the nose, there, G. Willow Wilson….). The dilemma is resolved happily, and although the civics-lesson, American-democracy stuff is pretty heavy-handed, its heart is in the right place, and should be inspiring to the younger readers who make up most of this 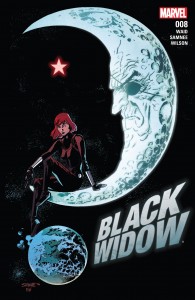 book’s audience (sure would have resonated differently given a different real-world outcome, though…). Old Man Logan begins a new arc involving Jubilee, who’s gone missing; her trail leads to Romania, where Logan has to battle… well, the logical bad guy you’d find at the intersection of Romania and Jubilee, I suppose, as the monster-society Howling Commandoes guest-star. Lemire’s good at moving all his pieces around effectively, and the last panel (not to mention the look at next issue’s cover) will definitely bring everyone back; Andrade’s shadow-soaked art is particularly appropriate given the villain and subject matter. That leaves Black Widow, with Natasha trying to rescue a bunch of pre-teen sleeper-agent girls that her former Russian mistress has pre-programmed and set loose to carry out various terrorist activities; the Waid/Samnee team, as always, is slick, professional, beautiful-looking plot-twisty suspense fun, and well worth your time. 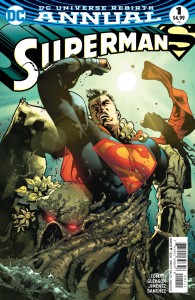 This was sort of a fifth-week skip for DC, with only a couple of late books (besides the Suicide Squad, the Brian Hitch-written JLA) and a couple of specials/annuals. The Batman annual is a classic bunch-of-cool-stories anthology, leading off with a Tom King/David Finch origin of Ace the bat-hound (which is nowhere near as dumb as it sounds, and in fact will tug at the hearts of pet owners), following with imaginatively-designed Declan Shalvey art on a Scott Snyder/Ray Fawkes story, following that with a Paul Dini/Neal Adams Christmas team-up with Harley Quinn, and adding a Riley Rossmo-drawn Arkham Asylum tale

for dessert. That’s an all-star line-up and and a great $4.99 present for any bat-fans on your list. The Superman annual is all one story, beginning with a mysterious drought around the “new” Superman’s homestead and ending in a Swamp Thing team-up.   Swamp Thing’s vegetation and morphing abilities bring out the best in Jimenez; Tomasi and Gleason give him a bunch of show-off splash (and double-splash) pages, and he delivers on every one. New Talent Showcase is a collection of stories written through DC’s Writers Workshop Pilot Program, drawn by artists from, yes, their Artists Workshop Pilot Program; you get nine eight-page stories, almost all from people you’ve 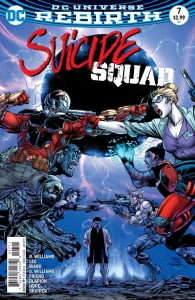 never heard of, for $7.99. Is it worth it? Sure –  brand-new creators mean brand-new perspectives and voices, and while some of this is still finding its legs, more than half is from people good enough to be creating  professional comics in the next couple of years. Get it just so you’ll have —- —–‘s first published art, and can brag that you knew them when. Suicide Squad is worth noting, as always, for the Jim Lee art, and for its switcheroo plot wherein a mishandled device at Belle Reve prison drives all its personnel and inmates insane — except the insane Harley Quinn, whom it drives… um, sane, so that her decidedly un-fearless, clinical-psychologist self has to figure out how to run the gauntlet and save the day.

With 40 years of experience in comic reading, collecting and reviewing, English Professor Phil Mateer has an encyclopedic mind for comics. Feel free to ask Phil about storylines, characters, artists or for that matter, any comic book trivia. He will post your questions and answers on the AABC blog. His knowledge is unparalleled! He is also our warehouse manager, so if you are looking for that hard to find comic book, ask Phil!
View all posts by Phil →
This entry was posted in New Comics, Reviews and tagged Batman, Black Widow, Deadly Class, Ghost Rider, Inhumans vs X-Men, Jughead, Monstress, Ms. Marvel, New Talent Showcase, Old Man Logan, Rick and Morty, Saga, Seven to Eternity, Suicide Squad, Superman. Bookmark the permalink.