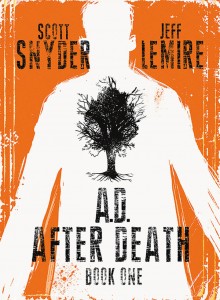 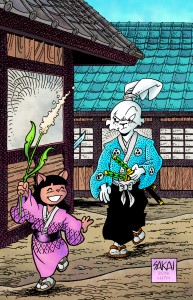 Let’s start with the indy books this week, because many of them offer addictive all-ages storytelling, with deep trade-paperback backlists that would make perfect presents (see, especially, Usagi Yojimbo, Groo and Lumberjanes — and, a little further down, Moon Girl and Devil Dinosaur). A.D.: 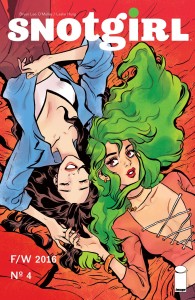 After Death is the only first issue, and the most-anticipated, because of its dream team of Snyder and Lemire. It’s graphic-novel sized (making its $5.99 price understandable), and, fittingly for an Image book, is sf, set in some kind of post-apocalyptyic Earth where one city is all that’s left — maybe; Snyder has a reputation for whiplashing plot twists, and so the hints dropped here about the inhabitants living for hundreds of years, through various reincarnations, may be more or less than we think. It’s a very good-looking package, with Snyder combining pages-long diary entries with Lemire’s signature watercolored, determinedly-simple, fascinating art;  with only three issues total (and the next one due out in a month) telling a very full story, it 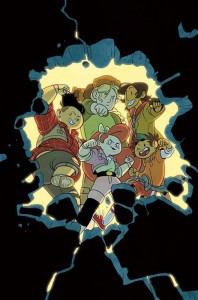 should attract a lot of readers.  Usagi Yojimbo has a one-shot tale guest-starring Inspector Ishida, the Columbo-like criminal investigator, as he and Usagi get enmeshed in a murder and corruption investigation; it’s just as well-constructed, entertaining and precisely-drawn as all the rest of Sakai’s tales, and, like most of them, an inviting jumping-on book for curious readers. Snotgirl is Bryan Lee O’Malley’s maybe-a-murder mystery about an LA fashion blogger who accidentally kills a woman in a club… maybe, since the woman comes back… maybe; Leslie Hung draws in exactly the style you’d dream about, if you wanted the perfect art for an American-manga West Coast fashion-hipster comic (See that cover? Up there to the left?).  Lumberjanes keeps crafting these great 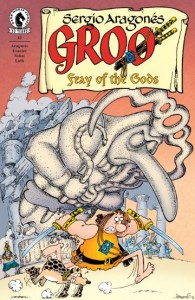 three and four and five-issue arcs that get collected into killer trades; the advantage of the comics is that you get the stories so much earlier, like this one that concludes a tale about the young Greek goddess Artemis, who’s also a camper named Diane, and how she grudgingly accepts the Lumberjanes’ help in rescuing her own cabin-mates from mythological monsters that have turned them to stone. Zeus as a fast-talking hustler swan is fun, and the googly-eyed cartoony chicken monsters with the gaze of stone are weirdly terrifying.  Groo has over thirty years of trades itself, but the new ones keep offering never-before-seen stories of Aragones’ dim but good-natured (but deadly) barbarian. Sergio is

arguably our greatest living cartoonist right now (Jack Davis having died this last July), and everything he does is a teachable moment on the precise placement of ink lines on paper for maximum effect; you will never regret buying an issue of Groo. Dept.H continues Matt Kindt’s own variation on a murder mystery — this one set in the ocean, six miles deep; it’s a lot like Jeff Lemire in its DIY, folk-art aesthetic, and if you liked Kindt’s earlier Mind MGMT this has the same blend of adventure and puzzle-solving, with the ever-present claustrophobia and fear of drowning ratcheting up the suspense, and a quietly-stunning last page. 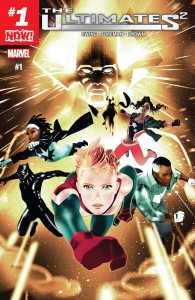 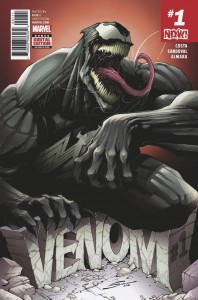 tending-toward-the-cosmic art. This new beginning spends most of its time dealing with the wreckage left of the team in its previous volume, and by the last page has the group back together, with a new/old member and a new leader; if you liked it before, you should still like this incarnation just fine, and if you never sampled the earlier book then there’s more than enough background to get you up to speed this time.  Venom, yet another relaunch, brings the symbiote costume back to earth, with Flash Thompson nowhere to be seen, and instead bonds it with a new guy, an amoral ex-Army Ranger who’s a hit man for hire: so, since the Space Knight/cosmic good guy angle didn’t work, we’re back to ultra-violent, earth-level bad guy instead, not much different from Carnage, except that where that character kills just for the psychotic thrill of it, this one kills rationally: don’t get between him and his goals, or he’ll squash you like a bug, and with just as little emotion.  Amazing Spider-Man Annual offers three tales: the

first, set in Mexico City, has an earthquake awakening a sleeping goddess, with predictable results, and a last page that reveals a familiar face (although not technically a Spidey villain) and sets up a sequel.  The second story guest-stars Cloak and Dagger, while the third, by guest writers and Let’s Make  A Deal co-hosts Wayne Brady and Jonathan Magnum, is played entirely for laughs and sees Spider-Man attending an improv class hosted by… Wayne Brady and Jonathan Magnum; it’s probably about as stupid as you’d imagine, although the very cartoony art is kind of interesting, and the other two stories are OK enough to make the comic worth its $4.99 cover price. 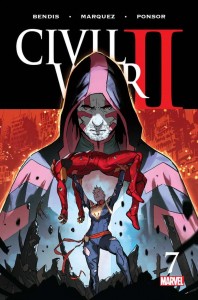 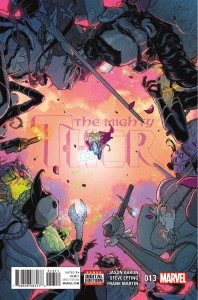 Civil War II reaches its penultimate issue with the Miles Morales Spider-Man standing on the steps of the U.S. Capitol building, where the Inhuman future-caster Ulysses had a vision of him killing Captain America; Cap shows up, of course, and so does Captain Marvel, and if you’re guessing that everything culminates in the start of a big confrontation that will mostly happen in the final issue…. well, you can script comics, too! At this point, you’re either buying this series or you’re not (unless you’re the type who only likes to read the endings of books), so let’s just say it’s got the same high-quality super-hero art and part-talk/part-action framework as all of the others so far. Mighty 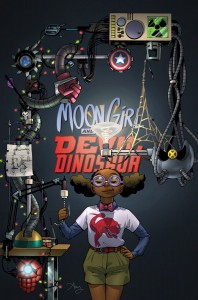 Thor sees the Thunder Goddess re-forming the League of Realms (with Angela and Agent Solomon added, among others) to deal with Malekith and the Dark Elves’ plans to conquer everyone and everything; Aaron’s been doing this long enough to know just how much story to dole out in each chapter, and how to keep readers coming back for more, especially with Epting’s realistic, detailed art making all the fantasy elements grounded and believable. Moon Girl and Devil Dinosaur sees Lunella, having solved a Bruce Banner-invented intelligence test, attracting attention as possibly the smartest person on the planet (although I smell a

twist coming about what Banner’s device actually was measuring…); there’s also the requisite hi-jinx with her big red buddy, and a last-page guest-hero appearance, all continuing to be presented with cute, appealing art and story that yield a clever, fun and very-well-contructed all-ages comic. Cage! offers Russian-born Genndy Tartakovsky (Dexter’s Laboratory and Samurai Jack) and his  ’70s-blaxploitation style take on Luke Cage, with some exaggerated, powerful (if cartoony) images, an extended big-screen hallucination sequence, and a Basil Wolverton tribute: it’s definitely a unique vision, and at only four issues should be an easy sell. 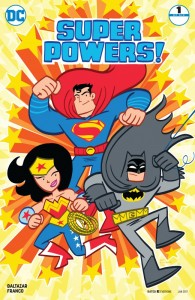 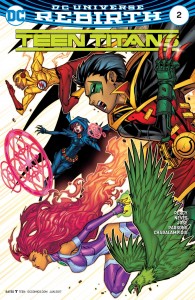 Art Baltazar and Franco have been providing DC fans with kid-friendly, super-simplified art with continuity-savvy scripting for quite a while now (Tiny Titans; Superman Family Adventures), and the Super Powers! mini-series offers their unique take on DC’s trinity of Superman, Batman and Wonder Woman; it’s a book whose bright colors and minimalist art should attract very young readers, while providing enough sly asides to keep their parents 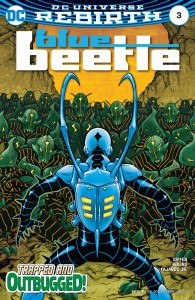 engaged too. Teen Titans sees pint-sized, egotistical partial jerk Damian Wayne reforming the teen team to battle his world-conquering relatives, Ra’s Al Ghul and Talia, while trying to earn the other kids’ trust. He’s an appealingly-snarky character, although between this, the Bat-books, and the upcoming Super Sons, he risks overexposure; get this and enjoy it before you get sick of him. Blue Beetle benefits from Keith Giffen’s deadpan scripting and Scott Kolins’s design-friendly art (look at that cover…), as Jaime starts to lose control over the scarab, Doctor Fate shows up to talk to Ted Kord about, hey, for the good of the 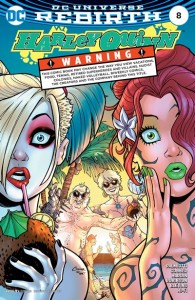 universe we should probably kill that kid, and yet another Blue Beetle everything-you-know-is-wrong origin story looms. In Harley Quinn, she and Poison Ivy go on vacation, and end up in a nudist colony for old people (along with a flashback to Harley’s first meeting with the Joker); I continue to admire how Palmiotti and Connor take set-ups that, in anyone else’s hands, would be exploitive and silly and, somehow, flip them back on themselves and make them empowering and thought-provoking — and still both funny and touching.

With 40 years of experience in comic reading, collecting and reviewing, English Professor Phil Mateer has an encyclopedic mind for comics. Feel free to ask Phil about storylines, characters, artists or for that matter, any comic book trivia. He will post your questions and answers on the AABC blog. His knowledge is unparalleled! He is also our warehouse manager, so if you are looking for that hard to find comic book, ask Phil!
View all posts by Phil →
This entry was posted in New Comics, Reviews and tagged Blue Beetle, Cage, Civil War II, Dept.H., Groo, Harley Quinn, Lumberjanes, Moon Girl Devil Dinosaur, Snotgirl, Spider-man, Super Powers!, Teen Titans, The Ultimates, Thor, Usagi Yojimbo, Venom. Bookmark the permalink.