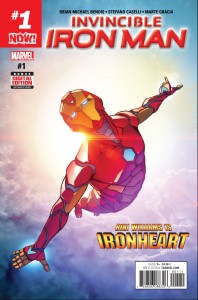 Of the Marvel first issues this week, Invincible Iron Man offers a new person, the fifteen-year-old girl genius Riri Williams, in her cobbled-together Iron Man suit (Tony Stark having, apparently, “died” at the end of Civil War II), learning the ropes of super-heroing and trying to decide what to call herself. Bendis, as he proved way back in Ultimate Spider-Man, is good at the young-hero bit, and Caselli’s got a smooth superhero style, with a just-slightly-exaggerrated way of drawing the faces that makes the characters appealing. One part of her origin is definitely too Punisher-y (although at least it only takes up a couple of pages), and there’s a scene with the police being trigger-happy that Bendis has done before, but overall this offers an attractive character, and a new angle on the title franchise, with an inevitable last-page reveal that ought to bring readers back for more. Avengers #1.1 is one of those in-the-past mini-series, by regular Avengers scribe Mark Waid, that retells and expands on stories from right around the original Avengers #16, when most of the heroes left and the new lineup 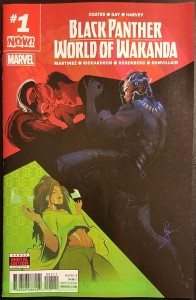 consisted of Captain America trying to mold Hawkeye, Quicksilver and the Scarlet Witch into a team. Kitson’s got a cool, efficient art style that’s a little like Alan Davis’s, and good at drawing heroes — fortunately so, since this issue has a lot of ’em, plus the Masters of Evil, plus the Frightful Four — and Waid has a knack for balancing continuity-rich implants like this with a clear story (the plot, with the new members trying to fight through self-doubt and live up to the legacy of the departed ones, pretty much writes itself). Black Panther: World of Wakanda is a long-form anthology title (the first story goes five issues) about that tech- and mythology-heavy African kingdom; here, we get a look at the Panther’s traditional female bodyguards, the Dora Milaje, specifically the origins of Ayo and Aneka, who are leading a rebellion over in the main title, plus a back-up story filling in some of the mysteries about the fear-illusion-broadcasting woman Zenzi. The Panther’s regular writer, Ta-Nehisi Coates, has assembled a group of talented young African-American women to handle most of the creative work on this book, and their deep connection to the setting gives the storytelling a buzz that carries it over a couple of soap opera-y bumps and makes it worth reading.

That leaves Spider-Man: Renew Your Vows, based on the Secret Wars mini-series and featuring a Peter Parker married to Mary Jane Watson, and with a daughter, Annie, who also has spider-powers; throw in the suit Mary Jane wears, which gives her similar abilities, and you’ve got a whole crime-fighting arachni-family. Bronze Age spider-writer Gerry Conway helps to make it feel like this really is the original Spidey, if time had passed more normally for him than in the actual Marvel universe, and there are a couple of short, charming, cartoony back-up stories that emphasize the book’s amiable, we’re-all-in-this-together tone. 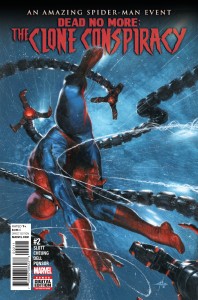 Speaking of Spidey, Clone Conspiracy continues to have the Jackal bringing various heroes, villains and supporting cast members from the wall-crawler’s 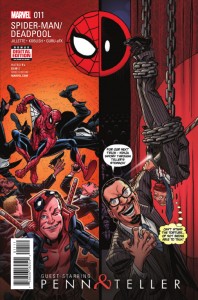 long, and sometimes tragic, history back to life; since this tale is crafted by long-time head Spider-writer Dan Slott, and he’s been building to it in the regular Amazing Spider-Man book for years, regular readers should treat it just like one of that title’s issues; considering that this issue features a revived Dr. Octopus, and a Scarlet Spider with a startling revelation about the whole thing, they’ll be lost if they skip the events occurring in it. Spider-Man/Deadpool has a guest writer: Penn Jillette, of all people, and that magician, not one to stray far from his actual life,

promptly writes himself and partner Teller into a Las Vegas identity-swapping tale (foreshadowed on the cover) that, thanks to guest artist Scott Koblish’s abilities at both caricature and action, is just as crazy as any regular installment of this title has been. That leaves Solo, with its second issue sending its costumed mercenary on a S.H.I.E.L.D.-initiated extraction of an undercover cop from a family of gunrunners; if you like books in the Deathstroke/Punisher/James Bond genres, this has enough action and self-aware snark (it’s co-written by Deadpool‘s regular writer) to keep you interested. 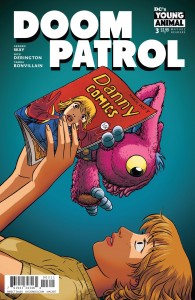 The DC debut this week is of another of Gerard Way’s Young Animals titles: Mother Panic, which could be anything from the title but turns out to be about a woman who’s a Gotham City vigilante with a tangled, mysterious past and uncertain motivations. She’s clashing with one of those businessmen who’s secretly a sociopath (not unusual in Gotham), and partnered with a serial-killer artist (also not unusual; Gotham’s a tough town). As you might expect for a comic with that setting, there’s a panel or two of the Batman, but he’s only off in the margins; the words and pictures have a sleek, dark momentum and off-kilter modern 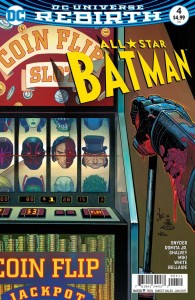 sensibility all their own. Doom Patrol, another from the YA imprint, is starting to pull together its team now that it’s on its third issue: we have Larry, Cliff, Danny the Street and, of all people, Flex Mentallo, the latter two of which tutor Casey, the lead character and EMT whose ambulance Danny has taken over, about her hidden origins, why all these weird things have started happening around her, and how she fits into the new lineup. Bizarre, but with a solid underpinning in continuity (at one point, Casey goes through a funhouse ride whose scenes mirror events from the Grant Morrison run of the title), and so far it’s been a surreal success. Meanwhile, All-Star Batman continues its long Two-Face team-up, with a big cast of villains and others chasing after the Dark Knight and his split-personality frenemy; anything by Scott Snyder and John Romita Jr. would be worth a look, and 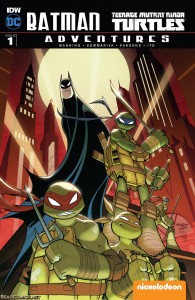 this is no exception. Finally, there’s Batmen/Teenage Mutant Ninja Turtles Adventures; the “Adventures” in the title indicates that this takes place in the universe of the Batman Adventures comic and cartoon — and of the Turtles’s more-cartoony incarnation, too, as their worlds cross over and the inevitable team-up looms. The first Bat/Turtle crossover last year was an unexpected hit, and there’s no reason to think this lighter, more-retro version of the characters won’t be one too: especially considering the last-page appearance of a couple of villains that would make Bruce Timm, who helped to create the Batman Adventures style, proud.

Violent Love is about an ’80s Southwestern Bonnie and Clyde, and how they got that way; Barbiere makes it as hard-boiled and gritty as its title suggests (he name-checks the Coen brothers as an influence), with artist Santos adding a clean, old-fashioned Darwyn Cooke feel to the sexy women, sociopathic mobsters and general blood ‘n’ guts. Cerebus in Hell? is a sequel mini-series to that 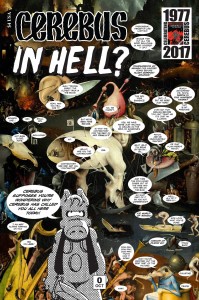 decades-long comic by Dave Sim, and as you might expect is surpassingly strange: Sim has taken the Gustave Dore woodcut illustrations of Dante’s Inferno, and a bunch of clip-art scans of his old Cerebus poses, and combined them to form a series of one-page, self-contained, three-or-four-panel comic strips about the barbarian aardvark wandering through hell (or “hell?”), all of which end in some sort of punchline or joke. Only Sim could conceive of something like this, and only Sim could pull it off — which he does, although it makes considerably more sense if you’re familiar with Cerebus, Dante and Dore; new readers should go

buy a Cerebus collection or two first (start with Church and State; if that doesn’t hook you, you’re incompatible with the character, and can save your money). Betty and Veronica offers the second installment of a battle between the two Riverdale teens (Ronnie’s dad is driving Pop Tate out of business to open a hipster coffee shop; Betty’s trying to save him through fundraisers; Ronnie’s interfering), mostly an excuse to watch Adam Hughes chronicle their adventures in his very female-centric style: but, really, that’s reason enough to buy it, and his scripting being more solid,, and less cringe-worthy, than you might think is a welcome bonus. 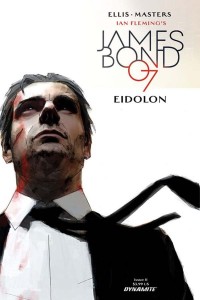 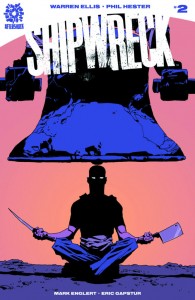 Five more indy books — two by Warren Ellis, who’s wrapping up his latest James Bond arc in fine style, with rogue sleeper agents, gunplay, car chases and menace, all offered with typically-British stiff-upper-lip perseverance.  Shipwreck is about a pilot moving through a strange world, and with this second issue we begin to get some answers about what happened: he’s got some kind of dimensional transporter inside him, and his ship crashed in another dimension and he survived. Or he died, and now his spirit is stuck. Or he’s horribly injured, and hallucinating everything. Or… well, it’s Ellis, so who knows yet,

but it’ll be both creepy and highly technological when it’s revealed, and meanwhile the dreamlike landscape and underlying menace are fun to watch. Casanova is Matt Fraction’s now-longstanding first hit, about a dimension-traveling spy/adventurer/rogue, and in this latest arc he’s had amnesia; with only an issue or two to go, though, old acquaintances, both friendly and not, are popping up, and it should all build to an explosive, satisfying head soon. As always, the Fabio Moon art is wonderfully precise, and there’s the bonus back-up story by Moon’s equally-talented brother, Gabriel Ba, and written by Pulitzer Prize winner (and comics geek) Michael Chabon. Lumberjanes/Gotham 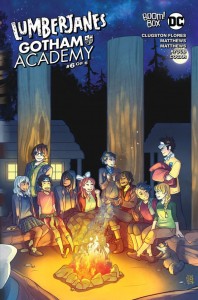 Academy wraps up successfully; the story, about a time-locked and traumatized teen who draws the combined title groups into her spell-gone-wrong, has been solid enough to bear the weight of its ten or twelve main characters, and the art team has managed a middle ground between the two books’ styles that works (a couple of times, I had trouble telling everyone apart, but there are individual scenes and emotional beats that really deliver). If you haven’t been reading it up to now you might want to wait for the trade, out in the spring, or check out the individual trades now available for both Lumberjanes and Gotham Academy: if you 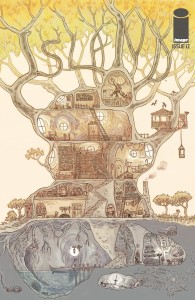 have a high-school-or-younger girl on your holiday shopping list, especially, I’ll bet they’d like them.  That leaves Island, hitting twelve larger-than-normal issues and still going strong, no small feat for a progressive indy anthology. Fil Barlow’s Zooniverse and Lando’s Island 3 would have fit comfortably into an ’80s issue of Heavy Metal, while Alex Smith and Annie Mok’s Avia looks like some cool little mini-comic, magically enlarged, and Michele Perez and Remy Boydel’s The Pervert and Zach Baldus’s Lofty take very different views of their canine main characters: as always, more than enough interesting, varied storytelling to justify the $7.99 price.

With 40 years of experience in comic reading, collecting and reviewing, English Professor Phil Mateer has an encyclopedic mind for comics. Feel free to ask Phil about storylines, characters, artists or for that matter, any comic book trivia. He will post your questions and answers on the AABC blog. His knowledge is unparalleled! He is also our warehouse manager, so if you are looking for that hard to find comic book, ask Phil!
View all posts by Phil →
This entry was posted in New Comics, Reviews and tagged Avengers, Batman, Betty and Veronica, Black Panther, Casanova, Cerebus, Deadpool, Doom Patrol, Gotham Academy, Iron Man, Island, James Bond, Lumberjanes, Mother Panic, Shipwreck, Solo, Spider-man, Teenage Mutant Ninja Turtles, Violent Love. Bookmark the permalink.