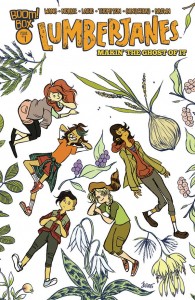 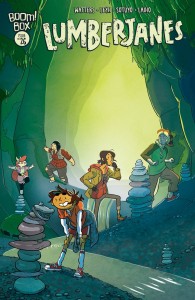 If you only knew comics from current movies, you’d think they were all about superheroes, but of course that isn’t true: comics can be (and always have been) about anything;

they’re just a medium of storytelling. Witness the all-ages adventure books that begin our list this week: Lumberjanes, about a group of pseudo-Girl Scouts whose summer camp is in a forest that’s considerably more unusual than it looks, has a cartoony style that may be off-putting to readers raised on superhero realism, but its sharply-defined characters, clever plots and inclusive, welcoming style will suck you in if you let it — you start to care about these kids, and admire their plucky charm. The 2016 Special offers two stand-alone stories: the 32-page lead is about a possible ghost/monster ransacking the 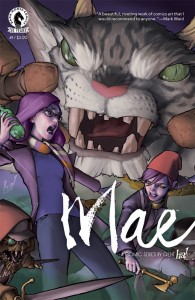 camp and raiding its food supplies, while the eight-page back-up is about Ripley’s encounter with a sphinx (and is a great example of the lost art of telling a complete, satisfying tale in that short space). Lumberjanes #26, the regular comic, is the middle chapter of a longer story about a roc and magical cats (I told you it was an unusual forest…), but isn’t a bad intro for first-time readers; its breakneck pace sweeps you along, and the last-page cliffhanger guarantees that you’ll be back.  Goldie Vance is a Nancy Drew-ish girl-amateur-detective tale — if Nancy were part African-American, and hung out at a resort hotel 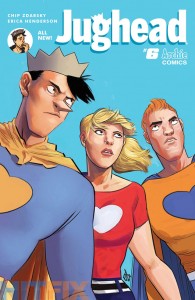 in Florida in the early ’60s; it gets points for Brittney Williams’s clear, attractive art, for its character building, and for the casual, unspoken diversity of its cast.  Mae, the only debut of the group, is a solo effort by Gene Ha, and involves two sisters, one of whom vanished years ago, and returns with a tale about being transported to a fantasy world — some elements of which have followed her home. Ha’s using an open, character-focused style here — the girls’ faces fill the panels, and the coloring and art have some of the glossy, airbrushed quality of a Richard Corben; there’s also a 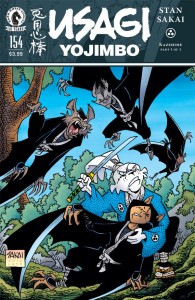 generous one-page introduction by Bill Willingham (Fables, Elementals, etc.), who knows something about decent fantasy storytelling, and recommends this first chapter highly.  Me, too. Finally,   Jughead finishes its first arc in high style, with Erica Henderson (whose Squirrel Girl makes this list every week it appears) contributing art that’s equal parts dramatic and slapstick, and Chip Zdarsky finishing up a clever plot about a new principal at Riverdale High with possibly-sinister intentions. Usagi Yojimbo has creator Stan Sakai showing all the younger writers and artists how to offer a perfect stand-alone adventure with drama, action, pathos and casual grace, just he’s been doing every month for almost twenty years — a comics career to emulate. 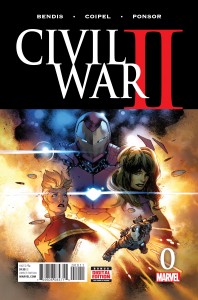 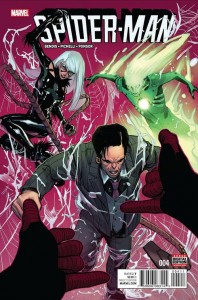 Lots of Marvels, the first four all written by Brian Michael Bendis. Civil War II #0 is mostly set-up and character-building, establishing the background for the personality and philosophical conflicts that will drive Marvel’s big summer crossover (it takes place before the events in the FCBD Civil War II giveaway), with the focus on She-Hulk, Rhodey/War Machine, Captain Marvel and the brand-new Inhuman who’s going to be the catalyst for it all; the smooth, detailed Coipel art does its job of communicating the action, making everyone look good and nailing the double-page splash that ends the issue. Spider-Man is a continuation of Bendis’s now-16-year run on Ultimate 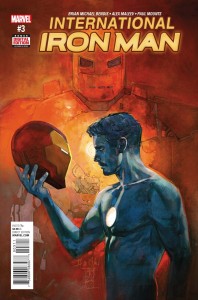 Spider-Man, now with the Miles Morales character as part of the regular Marvel universe; it involves the mutant Goldballs character (from Bendis’s X-Men run), Miles’s friend Ganke making a big decision for him, and a bunch of guided missiles; it’s all presented as smoothly and entertainingly as ever, and it gives artist Pichelli a chance to show how gracefully she can draw both people talking and high-tech weaponry (plus the last-page-reveal bad guy). Both International Iron Man and Scarlet are drawn by longtime Bendis collaborator Alex Maleev, who’s got a similar ability to create both believable, interesting people and easy-to- 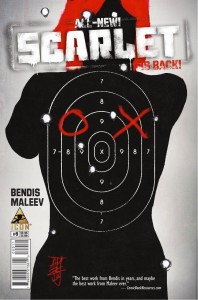 follow action; their difference is that Maleev leans toward shadowy noir, while Pichelli’s got a much sunnier style. That noir works well in both books here, though — International Iron Man keeps toggling between Tony’s college-age romantic past with a dangerous woman, and his present-day conflicts with her (yeah, the name “Elektra” occurred to me, too), while Scarlet is grittier, involving an Occupy-ish young woman who’s fighting corrupt police and politicians in Seattle; it plays to the writer’s strengths with both crime procedurals and strong women, and is obviously a labor of love for both  him and Maleev — and the only creator-owned book of this group. 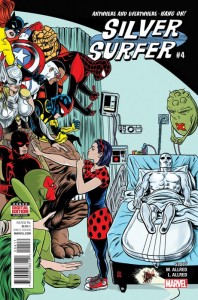 The other Marvels that caught my eye — Spider-Woman continues the “Spider-Women” crossover with Silk and Spider-Gwen, although it’s got Jessica back in her own world, so we get more clever, rings-true baby interactions, plus evil other-dimensional twins and set-ups for the big finale in Spider-Women: Omega next week. Writer Dennis Hopeless, who’s been doing increasingly-impressive work on this title, is joined by artist Joelle Jones (Lady-Killer), who’s technically accomplished and has a style a lot like Alex Maleev’s, but with a lighter touch; it’s nice to see her starting to get some attention. Silver Surfer has the Surfer 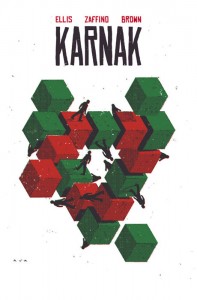 hospitalized, in a coma, and needing protection from a phalanx of bad guys led by his ex-lover (and defended by one of his other exes (sort of), plus his current flame), which gives us all a chance to watch Michael Allred draw dozens of superheroes, and a bunch of action/battle scenes; it also has a plot reminiscent of the ’80s Marvel Two-In-One #96, where the Thing is hospitalized, and everybody has to defend him from a bunch of bad guys etc. etc.; this issue’s cover is an homage to that one, and it’s both kind of impressive and kind of sad that I recognized it immediately, more than 30 years later. Meanwhile, Karnak continues Warren Ellis’s story of the Inhuman who can “find the flaw in all things,” and his

pursuit of a new young Inhuman who’s become the messiah to a cult, and now threatens the world.  It’s a relatively-quiet, for Ellis,  exploration of philosophy, cynicism and belief, with added butt-kicking; Boschi is yet another artist whose style  gravitates toward the dark and shadowy , and that tendency serves him well here. Powerman and Iron Fist wraps up its first arc in only four issues (so points for what, in today’s comics, passes for brevity), and has done a good job of introducing its title characters, establishing their buddy-movie rapport, and surrounding them with a well-rendered, street-level cast and setting; in a tough market 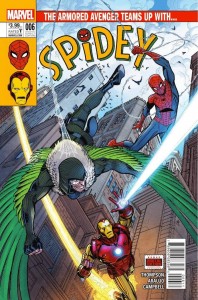 for new books, its brisk action, sympathetic characterization, and light comic touch just might give it a chance. Spidey is stories of Peter Parker and his costumed alter-ego while still in high school; given the character’s on-screen intro as a 15-year-old in the Captain America: Civil War movie, it makes sense to offer this to new readers.  Writer Thompson keeps it light and newbie-friendly (Spidey meets Iron Man in this issue), artist Araujo has a cartoony, simple style that fits the bill, and colorist Campbell uses a bright, primary palette that should be attractive to the younger readers who’ll make up most of this book’s audience; if you know someone like that, here’s a perfect gift for them. 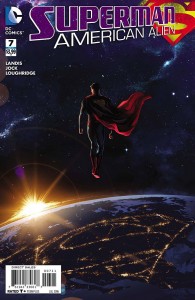 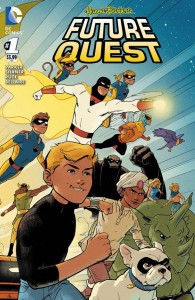 Five DC titles to talk about (if you count Vertigo), including one conclusion and one beginning. Superman: American Alien has been much better than expected: an episodic look at Clark Kent from Smallville to Metropolis, each issue written by Landis but with a different artist, showing a YA of Steel much rougher around the edges than we’re used to, and refreshingly human. This issue has his first encounter as Superman with an alien bad guy — Lobo (and the old-

school bastich version, not the hipster New-52 one) — who’s come to our planet to fulfill a contract, and doesn’t care about killing a bunch of primitive monkey-people Earthers to do it. Artist Jock, an inspired choice, channels his inner Simon Bisley, and Clark (and the general public) find out just how powerful this new guy in the bright-red cape can be.  Future Quest#1 delivers a crowd-pleasing mashup of all the Hanna Barbera adventure cartoon characters: As the title indicates, Jonny Quest and his friends and family are the spine, but there are appearances by Birdman and Space Ghost, and the cover’s got the Herculoids, the Impossibles, and Mightor, so apparently 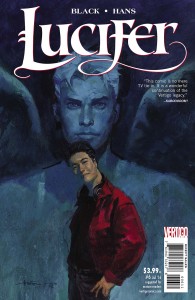 everyone’s invited to this party eventually. Parker, the writer, has done this sort of thing before (he’s been writing the King’s Feature King’s Cross team-ups with Flash Gordon, the Phantom, etc.), and Shaner’s got the model sheets for everyone down pat; as a bonus, the incomparable Steve Rude contributes seven pages (although he only gets to do Space Ghost for one panel), and classes up the proceedings considerably.  Superman/Wonder Woman has the penultimate chapter of the “Final Days of Superman” crossover that’s concluding all the Superman books in preparation for “Rebirth,” where the married-to-Lois, has-a-son, Pre-New-52 version of the character meets the current one; DC seems to be hinting

that the older version will take over, but who knows whether they mean it? On the Vertigo slate, Lucifer comes off its better-than-expected debut arc with a setup for the next one; Mike Carey and Peter Gross used to be very good at these spotlight-a-new-cast-member stories, ones where the principles don’t show up at all but an essential, memorable little tale gets told, and it’s nice to see Holly Black and Stephanie Hans following in their tradition. Astro City begins a new multi-part story about the legacy hero Jack-in-the-Box, which is cool because of all the Steve Ditko tributes, especially in all the villains and character designs; Busiek and Anderson’s affection for their legendary predecessor makes it a fun comic. 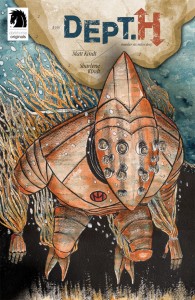 Dept. H is Matt Kindt’s follow-up to Mind MGMT, and has 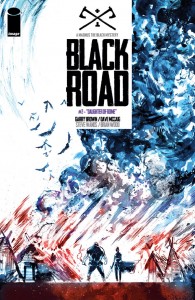 some of that book’s fondness for wordplay (the title, since the book’s about very deep-sea ocean habitats) and obsessively-immersive world-building; the book’s a murder mystery that promises to treat the reader fairly, and will bear lots of rereading for clues. Even without that, Kindt’s surreal combination of sophisticated storytelling and primitive art is worth reading. Black Road is early-Christian-era encroachment in the Norselands,

with a Viking acting as bodyguard to a traveling higher-up in the Church who ends up dead, leaving him to atone by helping to complete the churchman’s supposed mission himself. Sabrina is the long-delayed next issue of that occult prequel to Afterlife With Archie, with conspiracies within conspiracies and a probably-too-lazy riff on “The Monkey’s Paw”; it hangs together reasonably well despite that, and the delay;  Hack’s art, especially the smooth inking, makes it look like Greg Morrow doing an EC script, and helps the eerie tone considerably..

With 40 years of experience in comic reading, collecting and reviewing, English Professor Phil Mateer has an encyclopedic mind for comics. Feel free to ask Phil about storylines, characters, artists or for that matter, any comic book trivia. He will post your questions and answers on the AABC blog. His knowledge is unparalleled! He is also our warehouse manager, so if you are looking for that hard to find comic book, ask Phil!
View all posts by Phil →
This entry was posted in New Comics, Reviews and tagged Astro City, Black Road, Civil War II, Dept.H., Future Quest, Goldie Vance, Iron Man, Jughead, Karnak, Lucifer, Lumberjanes, Mae, Power Man and Iron Fist, Sabrina, Scarlet, Silver Surfer, Spider-man, Spider-Woman, Superman: American Alien, Usagi Yojimbo, Wonder Woman. Bookmark the permalink.