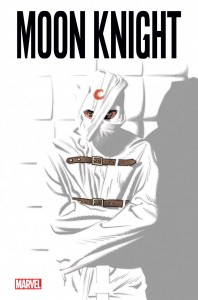 Only two Marvel debuts this week — Moon Knight starts in a One Flew Over the Cuckoo’s Nest setting, with its title character in an insane asylum, trying to decide whether the whole Konshu/superpowers thing is real, or just a symptom of his madness; considering that multiple personality disorder’s been hard-wired into his origin from the beginning, it’s 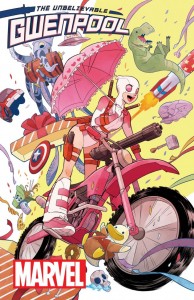 probably a little of both. Lemire’s good at giving the reader just enough to create a mystery and sustain interest for another issue, without revealing too much yet, and Smallwood’s effective at the gritty asylum parts (and gets to show what else he can do in one hallucinatory double-page splash). The Unbelievable Gwenpool is… well, I don’t know what it is; Marvel throwing a bunch of stuff at the wall to see what sticks, I suppose. The character had her origin as a visual joke in a random Deadpool variant cover, attracted interest, got a three-part bit in a Howard the Duck comic (she’s named Gwen Poole; she’s a comics fangirl from the “real world”; she somehow got transported to the Marvel universe, but knows it’s a bunch of comic books; she has no powers;  she’s casually psychotic and doesn’t mind shooting up bad guys, maybe 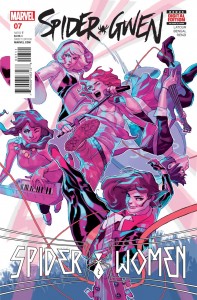 because it’s all fantasy to her), and here she is. Somehow, this is all reasonably entertaining, in a casual, what-the-hell, Harley Quinn kind of way, and there’s even a chance this could become a hit.  Stranger things have happened: consider Spider-Gwen, a similar throw-away joke that sprouted legs and developed a fanbase. Its current issue continues the crossover between the other female Spider-characters (Silk and Spider-Woman) that began with Spider-Women: Alpha last week, as the three women, on a girls’ night out, get trapped in Gwen’s world. If you’re reading any of those titles, you’ll want this too; if not, this isn’t a bad introduction to the three of them, and their easy repartee and developing friendship. 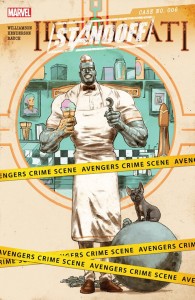 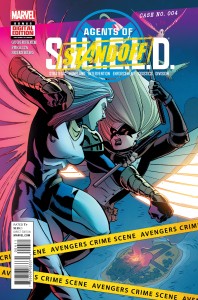 Various Avengers-related books, the first three all chapters in that ongoing Standoff: Assault on Pleasant Hill crossover that mashes up The Prisoner, cosmic cubes and witness-protection programs. The Illuminati, villain-centric as it is, tells the story from the point of view of some of the criminals – especially Absorbing Man, who’s particularly upset because his false life in the little town made him happy, and now he’s going to have to, you know, kill some people to get the bad taste out of his mouth. It’s an interesting, quirky little take on the situation, and manages to let the crossover move the title’s plot 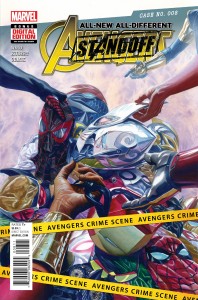 forward without feeling like it’s just an interruption of the main story. Agents of S.H.I.E.L.D. picks up from New Avengers, as that crew battles our regular S.H.I.E.L.D. agents to break Rick Jones out of custody; meanwhile, everyone’s chasing after one of those datasets that reveals all the heroes’ weaknesses; this is another title that’s pretty much just using the crossover to further its own developments, without affecting the meta-story. All-New All-Different Avengers, on the other hand, has their crew smack in the middle of the action at Pleasant Hill, with dozens of characters, both good and bad, running around; the Waid/Kubert team means it’s got the best storytellers of the group this week, and it shows; there’s a good bit with Deadpool and the girl who’s

actually a cosmic cube, and plenty of sensible action that moves everything forward and gets it set for the wrap-up in a few weeks; of the three books, this is the most essential to the main plot. A-Force is an Avengers title, too, but it’s not crossover-connected; it’s been involved in its own first arc, pulling its team together and giving them a reason to exist, and now after four issues it’s got a tight, interconnected little group of heroes, one that’s fun to read about and easy to like, with solid art and action. Will that, and its mix of familiar and obscure female characters, be enough to let it survive the next year on the comics racks, especially with all those other Avengers-related books running around out there too? 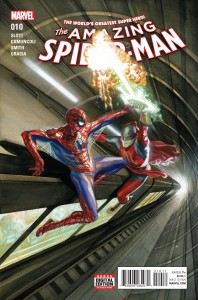 The other Marvels for the week. Amazing Spider-Man is in the middle of an international-intrigue story against Scorpio and the Zodiac gang (one that looks like it might take Parker Industries, and our hero’s Tony Stark-like 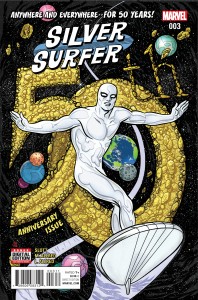 new lifestyle, down a couple of pegs); it’s benefiting from some cool-looking Alex Ross covers, and from its regular Slott/Camuncoli creative team, who’ve been chronicling the character’s adventures for a number of years now, giving readers a familiar, very professional dose of storytelling every month. Slott’s showing his versatility by delivering a completely different experience over in Silver Surfer: more cosmic, more pop and more colorful, largely thanks to collaborators Michael and Laura Allred. This issue celebrates the Surfer’s 50th year, as he juggles an invasion by his former girlfriend, Shalla Bal, while his other former girlfriend, Alicia 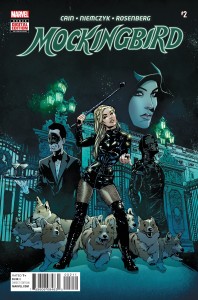 Masters, and current flame Dawn Greenwood, try to help; lots of heroes and lots of action make it zip, although since it’s only the third issue things don’t work out well for everyone yet (in fact, by the end the Surfer’s dead… but I think we can agree that will probably change for the better by partway through the next issue…). Mockingbird, like Amazing Spider-Man, is doing an international-spy story, set in England; it’s lighthearted enough to throw in a couple of Avengers riffs (Diana Rigg ones, that is), and quite a bit of humor; the cartoony, sexy art style goes well with the tone. 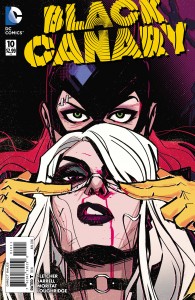 Only one DC book for the week, and Black Canary is a lot like Mockingbird: a cheerful mashup of spy, ninja and music action, guest-starring Batgirl, as Dinah tries to figure out multiple mysteries involving her mom, her aunt, and her missing rock group. Fun, and since it’s by the co-writer of Batgirl, and features Babs prominently, fans of that title will want this one too. 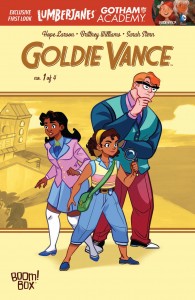 Indy first issues — Goldie Vance is a Nancy Drew for diversity-conscious Millenials, set in a Florida resort in 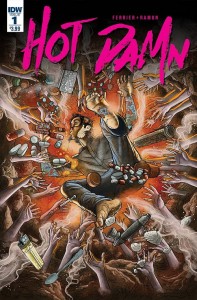 the early ’60s, with a heroine who’s a cheerful, plucky amateur detective; artist Brittney Williams, who’s been doing good work on Hellcat, delivers pitch-perfect art. There’s also a five-page preview of a Gotham Academy/Lumberjanes crossover coming this summer from DC and Boom: good marketing, since fans of those two titles should go for Goldie just as much. Black Road is Brian Wood in Northlanders mode, telling a tale of the Middle Ages, 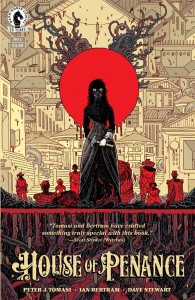 and Christian inroads into the far North; a cardinal needs a bodyguard/guide on a trip inland, and a gnarled old Viking warrior is his best bet. Wood likes to dig into the grim grit of history, and Brown’s art makes a good match for him. Hot Damn has the modest ambition of wanting to be Bill and Ted in Hell, but turns out to be The Life After, only without wit; there’s little here that we haven’t seen elsewhere, and better.  House of Penance takes the bit of history known as the Winchester House and crafts a mini-series out of it; the first issue assumes that you’ve already Googled it and 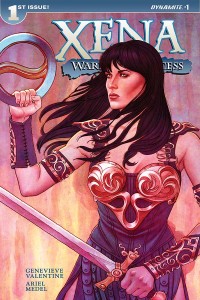 know what’s going on (or, maybe, that you remember the old Alan Moore Swamp Thing issue that used its tragic tale), and it’s enlivened by the art by Ian Bertram, whose hallucinatory, Frank Quitely-ish covers made the Marvel Secret Wars mini-series E is for Extinction so cool-looking.  Xena is just what you think it is: a new volume of the adventures of the TV heroine, retro and a little updated, created by people with obvious fond memories of the originals; if you’ve been thinking that the world needs more Red Sonya comics, this should fit the bill nicely. 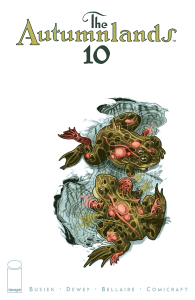 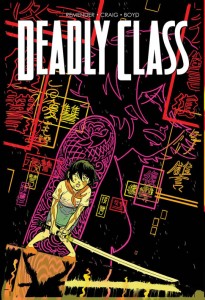 Three more established titles. Autumnlands has its two major characters on a quest through an increasingly-hostile landscape; it gets by on Busiek’s world-building and Dewey’s art (he has fewer anthropomorphic animals to draw in this episode, but a couple more special effects). This is a bridge issue, so it’s not a good introduction to the series; for that, get the first trade, which demonstrates its high-fantasy concepts and generous, detailed art a lot more clearly.  Deadly Class has wrung twenty issues so far out of its 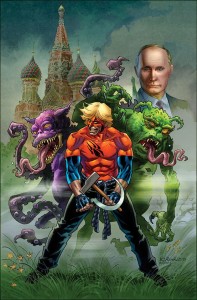 own high concept:  Catcher in the Rye, if Holden Caulfield had been attending a school for juvenile assassins; if you think that sounds like gonzo fun, you’re its target audience, and you’re probably right.  The Badger‘s been gonzo for decades, off and on; this newest version now has its cast of druids, veterinarians and martial-arts savants in place, and it somehow makes perfect sense that they’re battling demons and Vladimir Putin. With only three issues out, it’s still easy to get the whole story, and if you’ve never sampled this book’s ’80s-era charms in any of its previous incarnation, this isn’t a bad place to start.

With 40 years of experience in comic reading, collecting and reviewing, English Professor Phil Mateer has an encyclopedic mind for comics. Feel free to ask Phil about storylines, characters, artists or for that matter, any comic book trivia. He will post your questions and answers on the AABC blog. His knowledge is unparalleled! He is also our warehouse manager, so if you are looking for that hard to find comic book, ask Phil!
View all posts by Phil →
This entry was posted in New Comics, Reviews and tagged A-Force, Autumnlands, Avengers, Badger, Black Canary, Black Road, Deadly Class, Goldie Vance, Gwenpool, Hot Damn, House of Penance, Illuminati, Mockingbird, Moon Knight, S.H.I.E.L.D., Silver Surfer, Spider-Gwen, Spider-man, Xena. Bookmark the permalink.