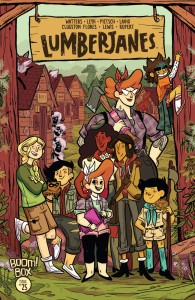 Let’s start with some all-ages books, including the standout Lumberjanes, celebrating its double-sized $4.99 25th issue with a jump-on chapter of a new story that’s an

effective introduction to the cast and their many charms, establishing the Girl-Scouts-in-an-enchanted-forest premise briskly with its trademark combination of heart and humor. The back-up tale is written by Chynna Clugston-Flores, whose Blue Monday and Hopeless Savages in the early ’00s were punk-attitude, trailblazing influences on a bunch of today’s diversity-conscious Millennial creators (five or ten years from now, many of the kids reading Lumberjanes today will be creating their own comics, too, and the world will be better for it).  Jem and the Holograms manages a similar humanism; it’s not a book with easy bad guys, or girls, since everyone has understandable motivations and a clear (if sometimes reluctant) moral center; add in the current “Dark Phoenix”-like story arc’s high-stakes adventure and unexpected plot twists, and this is a surprisingly-addictive comic, better than most of the superhero

books on the stands.  Howard the Duck belongs with the other two because it’s the second of a two-part crossover with The Unbeatable Squirrel Girl; it doesn’t hit that book’s heights because it doesn’t have the amazing Erica Henderson (whose version of Doreen is as definitive as Gene Colan’s Howard used to be), but the combination of regular USG writer Ryan North and Howard/Jughead/Sex Criminals creator Chip Zdarsky offers some inspired lunacy, including a Kraven the Hunter who isn’t quite a total jerk, Rocket Raccoon, and a cyborg-weapon cat who’s wandered in as a tribute to the Grant Morrison/Frank Quitely We3: that’s a hard combination to resist, and there’s no reason why you should. 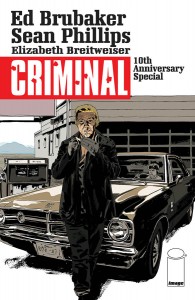 A trio of indy first issues: Criminal is a one-shot 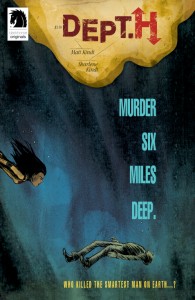 continuation of Brubaker and Phillips’s long-running hard-boiled crime series: it’s a story of a kid on a road trip with his n’er-do-well father, and it’s simultaneously a tribute to ’70s Marvel black-and-white comic magazines, a stubbornly-cynical coming-of-age romance, and a tale of casual, sudden and shocking violence. It’s very well done, and a perfect reminder of just how good those two guys are at this noirish, dark-lit American landscape. Dept.H. is Matt Kindt’s followup to his critically-acclaimed Mind MGMT, and uses the same sketchy, offbeat watercolor style of that series.  As the cover tagline, “Murder Six Miles Deep,” indicates, it’s a deep-sea equivalent of a small-community homicide mystery, with seven suspects stuck far under the ocean and a

plucky investigator with a high stake in the outcome. The title pun shows Kindt’s affection for wordplay, and the editorial material promises that he’ll scatter clues to the murder throughout the comics, so readers will have to read these issues just as closely as they did the surreal, psychologically-intense Mind MGMT episodes, and should find just as satisfying a payoff for their efforts.  Aloha, Hawaiian Dick, like Criminal, is a continuation of a previous book: in this case, it’s B. Clay Moore’s fourth mini-series since the early ’00s about a 1950s Hawaiian private investigator, which manages a sprightly combination of seedy tropical noir, jazz, and island mythology (think of Travis McGee crossed with the supernatural undercurrents of American Gods). 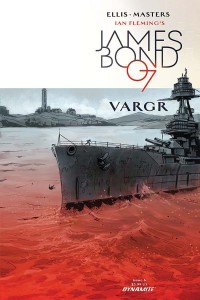 Artist Jacob Wyatt, who’s new to the series, has a clear, open style that hits the ’50s-pulp tone well, and if you’ve never encountered this book before this is a good place to start (the title hero doesn’t even appear in the lead story, but there’s a back-up feature with art by Jason Armstrong that offers a taste of his exploits, too). James Bond isn’t a debut, but the conclusion to Warren Ellis’s first arc of this new 007 comic –as you might expect, it’s been a gritty, high-tech tale involving designer drugs, evil rich people, various foreign locales, deathtraps, spycraft and English bureaucracy, and it ends satisfyingly, with a damaged hero and a righteous bullet to the head.

A bigger-than-usual clutch of DC books: Harley’s Little Black Book offers Harley teaming up with Zatanna, as drawn by Joseph Michael Linsner, so that artist’s considerable cult following should snap it up; for the rest of us, it’s also got the attraction of the regular Connor/Palmiotti scripting, which gets some PG-13-level sexual innuendo in, but manages to do it gracefully and from a female-empowerment angle (an R-rated Harley movie would have a chance of doing as well as Deadpool did, and I’ll bet there are Warner Brothers execs trying to figure out how to fast-track that right this minute…).  Legends of Tomorrow has nothing in common with the TV series except its title; it’s an ongoing anthology series with this lineup: Firestorm, written by Gerry Conway, pencilled by Eduardo Pansica, inked by Rob Hunter and colored by Andrew Dalhouse; 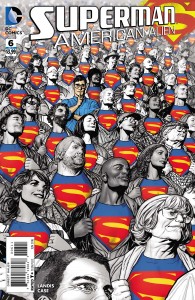 Metamorpho, written and pencilled by Aaron Lopresti, inked by Matt Banning, and colored by Chris Sotomayor;  Sugar and Spike: Private Investigators, written by Keith Giffen, with art by Bilquis Evely and colors by Ivan Plascencia (yes, it’s about the two gibberish-spouting babies, all grown up); and Metal Men, written by Len Wein, pencilled by Yildray Cinar, inked by Trevor Scott and colored by Dean White. Each story is twenty pages, so you get a big chunk of comics for the $7.99 cover price; because it’s a serialized anthology, the Firestorm and Metamorpho are the second parts of longer stories, so you might want to pick up the series’s first issue along with this second one.  Superman: American Alien continues its offbeat origin of the Man of Steel, as Clark Kent welcomes Smallville pals Pete Ross and Kenny Braverman (who both know his super-secret) to his new digs in Metropolis. Clark’s at 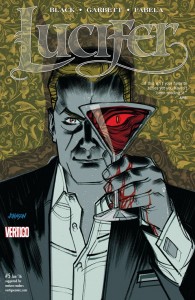 the stage where his alter ego is out and about, getting famous, so there’s some character-building byplay as the two old-town pals make sure their big-city buddy isn’t getting too swelled a head; this leads to Clark trying to fly into space and running into a couple of surprise guest stars. As with all the issues in this mini-series, there’s a refreshing, determined emphasis on a very young and human Clark, one who’s not above getting drunk, making mistakes and sometimes acting like a bull in a china shop; Jonathan Case’s down-home, realistic art is a good match for its emphasis on the human instead of the super-human. Bonus points to Ryan Sook for the striking cover, one I looked at five or six times before noticing the “Where’s Waldo?”-like Clark.  Meanwhile, Lucifer ends its first story arc in fine style, and by now has managed to meld the TV show with the earlier Mike Carey version of the cast very smoothly; lots of 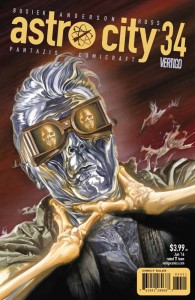 characters from the original series have been reintroduced and played their parts just right, and this comic has a grown-up sensibility and a complicated, wheels-within-wheels plot that makes it a worthy addition to the original run. That leaves Astro City, which concludes a three-part story with Steeljack, a world-weary, metal-skinned former villain turned private investigator (Bogie with super-powers, although Anderson draws him looking a lot like Robert Mitchum), which gives Busiek a chance to get his noir on and deliver a typically-well-constructed, deeply human story with lots of punching, sly digs at wealthy collectors, and a feel-good ending; if you check the racks, all three issues should still be there, and they make a great hour or so of satisfying comics reading. 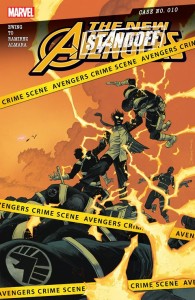 The Avengers-related Marvels for this week: New Avengers and Sam Wilson: Cap are both installments in the Standoff: Assault on Pleasant Hills crossover, which is winding down after two months. New Avengers has that team vs. S.H.I.E.L.D. vs. A.I.M. (which is actually New Avengers, too, but let’s not 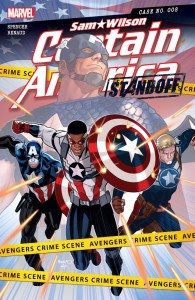 get into that now…), and doesn’t really involve the main Pleasant hills storyline, but does feature Al Ewing (who’s become a big part of underlying Marvel continuity lately, between his work on this title, Ultimates and Contest of Champions) delivering reunions of some old Thunderbolts and New Mutants teammates, and a giant Avengers robot punching out a Godzilla-like mutated commando. Sam Wilson: Captain America is right in the middle of the crossover action (in fact, this issue is the penultimate chapter, leading into the Avengers Standoff: Assault on Pleasant Hill Omega conclusion next week), and picks up right where the previous issue left off: with a de-aged and powered-up Steve Rogers fighting alongside Sam and Bucky Barnes: two Captain Americas and a Winter 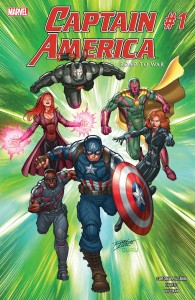 Soldier vs. a bunch of pissed-off bad guys, with about as much action as you’d expect. The other Cap comic this week, Captain America: Road to War, features the Marvel Movie Universe Cap, heading up the Avengers, and is a prequel to the Captain America: Civil War movie coming in just under two weeks; for your $4.99, you get that regular-sized main story, plus a reprint of Tales of Suspense #58, by Stan Lee, Don Heck and Dick Ayers, in which Kraven the Hunter and the Chameleon instigate a full-issue Cap/Iron Man fight. That bit of the Silver Age, over fifty years old now, would set you back $1350 in NM condition (as compared to a cool $100 in VG): another good reason to buy this version instead. 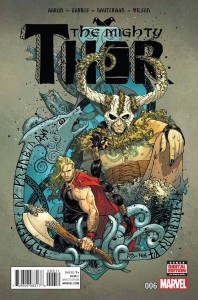 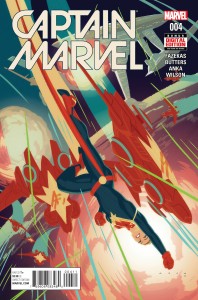 Everything else: Mighty Thor is a change-of-pace issue without Jane Foster; instead, Loki and the Roxxon

Energy guy discuss the art of the deal, leading to a Viking era tale about a warrior who prayed to Loki instead of Thor, and how that worked out. This gives Aaron a chance to set guest artist Rafa Garres loose on impressionistic Simon Bisely-like Middle Ages ass-kicking, and if you think that sounds like fun: here you go. Captain Marvel is Carol and Alpha Flight battling a possible alien-invasion mistaken-identity thing (the aliens’ homeworld was destroyed by the Kree, and she kind of wears their insignia; ergo, her home planet, Earth, should be

destroyed); it’s been pretty good, although it’ll be better when it’s all together in the trade. Hawkeye ends its first trade, and it’ll probably read better that way, too; readers will be able to appreciate Lemire’s two-tiered past/present storytelling, and Perez’s easy adaptability to its different styles, without interruption.  Extraordinary X-Men is also Lemire, paired with the always-dependable Humberto Ramos — and he tests that dependability, by asking him to show the younger Jean Grey-Institute X-Men surviving a year-long trek across the multiple worlds of future-Apocalypse’s interconnected 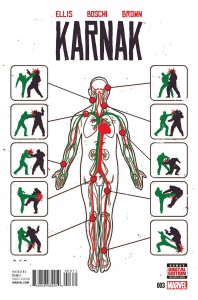 cosmic space-ark thingy: that’s a lot of weird landscapes and inhabitants to have to draw all in one issue, and he delivers. This is part of the X-book “Apocalypse Wars” crossover, although as long as you’ve read the previous issue it should all make sense; it’s next month’s readers of All-New X-Men and Uncanny X-Men, the next two parts of the crossover, who will need help. That leaves Karnak, a minor-key Warren Ellis meditation about cynicism and belief, centered on a character who can find the weak spot in any person, object, argument or philosophy; in this third issue a new artist, Roland Boschi, debuts, but his style meshes well enough with Garardo Zaffino, who drew most of the first two issues: with Ellis, it’s all about the attitude, and the way Boschi nails a chilling last-panel smile shows that he knows how to make it work.

With 40 years of experience in comic reading, collecting and reviewing, English Professor Phil Mateer has an encyclopedic mind for comics. Feel free to ask Phil about storylines, characters, artists or for that matter, any comic book trivia. He will post your questions and answers on the AABC blog. His knowledge is unparalleled! He is also our warehouse manager, so if you are looking for that hard to find comic book, ask Phil!
View all posts by Phil →
This entry was posted in New Comics, Reviews and tagged Astro City, Avengers, Captain America, Captain Marvel, Criminal, Dept.H., Harley Quinn, Hawaiian Dick, Hawkeye, Howard the Duck, James Bond, Jen and the Holograms, Karnak, Legends of Tomorrow, Lucifer, Lumberjanes, Superman, Thor, X-men. Bookmark the permalink.