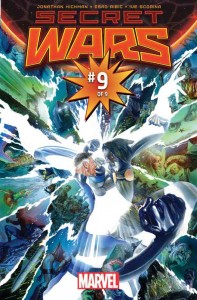 Finally! On its own merits (ignoring the lateness, the hundreds of pages of mini-series, etc.) this has been one of the better Marvel events; you can accuse Hickman of many things, but he’s always got a solid plot, and character through-lines that make sense, and he uses them here: at base, this has been a Fantastic Four story (the last for a while), stemming from Hickman’s long run on that title just before he took over the Avengers books, and it’s a good one, with a conclusion both satisfying and poignant.  Also, kudos to Marvel for not rushing some other artist in when Ribic fell behind; his high-quality work and ability to handle all the various characters will make this a nice trade package, and it’ll be fun to read it all in one sitting, with no ads in between the pages, and see how it feels then; some random artist in the middle would only have lessened the story’s impact. For now, it manages to answer many questions (how did Miles Morales get to stick around on Marvel Earth-prime? Because he had a forgotten hamburger in his pocket), while leaving a few to debate (so, in the new Marvel earth, Victor von Doom gets to have an unscarred face, but they kept the terrigen mists that are killing all the mutants? Interesting theological ramifications there… and how did Ultimate Reed Richards manage to survive, given the events in this issue?), and gets readers across the finish line both exhausted and (reasonably) happy. 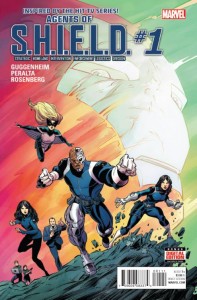 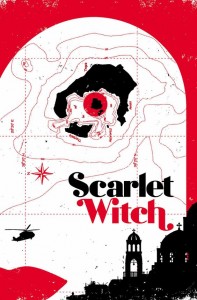 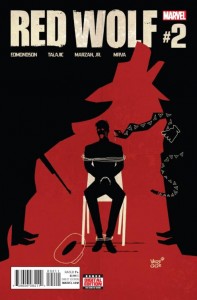 So: a bunch of the Marvel new launches, at various stages. The only debut is Agents of S.H.I.E.L.D., and it’s, understandably,  playing very close to the TV series, with the exact same group of characters; the previous volume was by Mark Waid, who’s a very hard act to follow, but Guggenheim does OK with the character voices and personalities. The art’s just average, and this doesn’t knock anyone’s socks off, but readers who pick up this first issue should find enough to stick around for at least another month or two. The two sophomore efforts, Scarlet Witch and Red Wolf, seem to be on opposite tracks: Scarlet Witch has a smart setup involving Wanda wandering the world, trying to figure out who’s screwing around with magic while 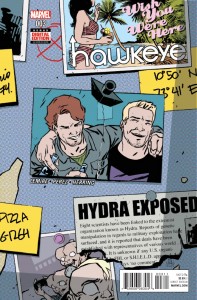 cleaning up their messes; that puts a clear spotlight on her, and Robinson’s good at making her relatable and attractive. So too for the Rudy art: he’s a lot like JH Williams III in his extensive, and expressive, use of design (sometimes too much: there are pages here that at first I thought were printed out of order, because their panel flow was off — but it’s just his experimental style. Better to fail by aiming too high than too low, though…), and, like Williams III on Promethea, it helps that this is a book about magic; the trippy visuals match the trippy plot points nicely. Red Wolf has more conventional art, perfectly OK but nothing unusual, and so has to rely on its story elements: but they, too, are average at best; what happens here is pretty much exactly what you 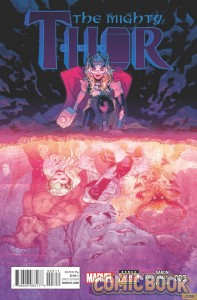 think is going to, given the time-jumping fish-out-of-water plot, and so far there are no surprises or “wow” moments. Given that it’s a book about a character whom few readers know or care about, it’s going to have to up its game considerably if it wants to last more than six or twelve issues in today’s market. Maybe it should take notes from Hawkeye: Jeff Lemire’s been using a split-screen present/future dichotomy in his first extended story, making use of the printed comics medium in interesting ways, and combined with the fun Clint/Kate relationship, and Perez’s plastic, adaptable art, there’s plenty here to keep readers coming back. Mighty Thor  and All-New, All-Different Avengers are the best of the bunch, for much the same reason: good writing from both Aaron and Waid, with clever plotting and dead-on characterization, supplemented by a deep knowledge of 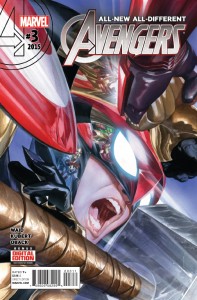 continuity that makes the books’ worlds feel lived-in and real, paired with very solid, good-looking superhero art from Dauterman and Kubert.  In Thor, the issue’s mostly about the first meeting between the Jane Foster Thor and Loki, and it’s a relief that Aaron is acknowledging all the changes in the Trickster God’s motivations over the last few years, while still leaving readers to wonder about his true loyalties; given that Foster has every reason to distrust the guy (and that her first reaction is to smack him in the head with her hammer), there’s a cool dynamic there that promises some interesting stories.  So too for A-N A-D Avengers, where Waid has a team split between the old guys (Iron Man and The Vision), the young ones (Ms. Marvel, Nova and the Miles Morales Spider- 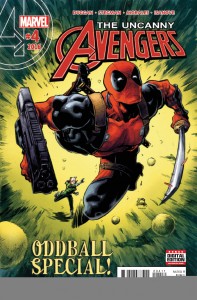 Man, all teenagers) and the New Wine in Old Bottle ones (Jane Foster Thor and Sam Wilson Captain America). Throw in a great big alien Chitauri warlord to stir the pot, and the result is a fun, fast-moving story that’s over in just three issues: a welcome change from the temptation to start a new book with a sprawling six or seven-issue epic instead. Uncanny Avengers does something similar, taking four issues to finish its first arc, although Duggan’s not as good as Waid at juggling all the characters (the current incarnation of the team has Steve Rogers as coordinator, commanding Rogue, Deadpool, Cable, Brother Voodoo, Quicksilver, Synapse and the Human Torch — an oddball grouping for sure, and with some interesting dynamics).  Duggan, who’s most familiar with Wade Wilson, tends to focus on him too much, while many of the others stand around with little to do; 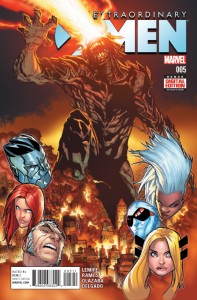 the art, by Stegman, is OK, not hurting but not really helping, either.  Still, considering the movie looming on the horizon, any book with Deadpool’s got a guaranteed pass for most of the rest of this year — which, of course,  is why Marvel’s generating so many of them.  That leaves Extraordinary X-Men, which manages to rise above average due to good writing by Lemire (this X-book, with all its characters, is much less experimental than the smaller-scale Hawkeye), and typically-smooth, just-cartoony-enough art from Ramos. With Storm in charge, and a team of Young Jean Gray, Old Logan, Nightcrawler, Colossus, Magic and Iceman, there are more than enough interesting interrelationships to keep everything bubbling nicely. 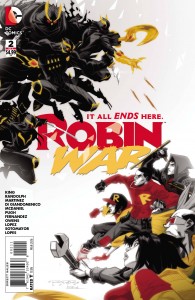 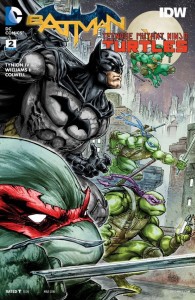 The DCs that caught my eye this week — as usual, most of them bat-related. Robin War hasn’t been a bad crossover, 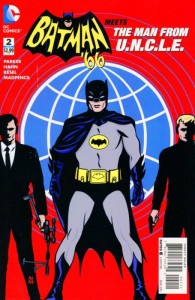 and its conclusion creates a significant new status quo for Dick Grayson, at least for now (he ends up with a new job, to go with the two full-time ones he already had…). It does suffer from too-many-cooks syndrome, with seven different artists and three colorists eliminating any sense of continuity from the visuals; at least it’s got just one writer, and King has established himself as a rising new 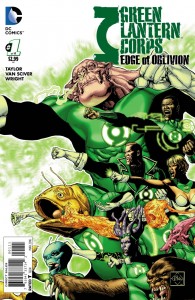 talent over the last six months or so (with The Vision, especially), so that helps.  Batman/TMNT sold out of its first issue; it turns out that the flying-rodent/sewer-dwelling-reptile combination meshes pretty well, with the Turtles’s snarky humor playing nicely off of the Dark Knight’s grimness. The debut only got them up to the point of their first actual meeting, so there’s a lot more going on in this second effort, and it’s better than you might think. 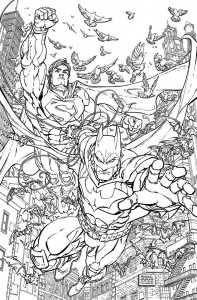 Not so much for Batman ’66/Man from U.N.C.L.E., which sounds good in concept (the two sets of characters were on TV at the same time, and had a similar pop-culture fizz around them), but falters on the page, partly because the whole U.N.C.L.E. thing fails to translate well to modern-day sensibilities, and partly because the art, while OK on the Bat-crew, renders the super-spys almost unrecognizable. Still, the plot involves the evil T.H.R.U.S.H. breaking a bunch of Gotham villains out of Arkham and recruiting them, so we get to see 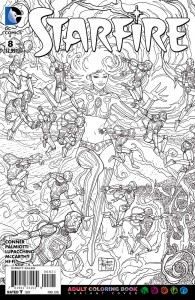 a lot of familiar bad-guy (and gal) faces from the show. Finally, the Green Lantern Corps book, while billed as the first issue of a mini-series,. is really just a continuation of the recent GLC: Lost Army series, with John Stewart, Guy Gardner and a bunch of familiar alien GLers stuck in a decaying universe far from home; if you liked that, you’ll presumably like this too, and if you haven’t checked in with the group in a while it isn’t a bad issue to get caught up 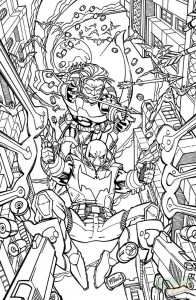 with. While we’re talking about DC books, you might remember that last week we mentioned the January variant covers — the Adult Coloring Book ones — and how cool they were.  Three more were released this week (of an eventual set of 25), and if you’re keeping score they’re Batman/Superman #28, Red Hood/Arsenal #8 and Starfire #8. They remain a fun and unusual conceit; if you’re only getting one, the Batman/Superman is the best, both because of its clear, coloring-friendly composition by Freddie E. Williams II, and because it’s the one with the two most iconic characters (as always,  click on the thumbnails presented here to see a larger, more detailed version). 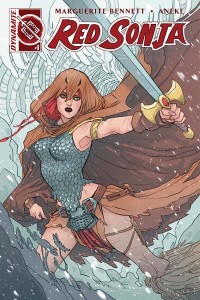 Two new indy books from Marguerite Bennett, another rising star: Red Sonja is her take on the iconic warrior woman created by Robert E. Howard, and is something like the tenth “first issue” of her adventures; it involves Sonja’s adopted home of Hyrkania getting increasingly civilized, with the result that she’s bored to tears (something Bennett, and artist Aneke, render with a

refreshingly-light touch), but then the plot ends with an ironic twist, one with some modern political echoes; it’s all smartly done and easily keeps the readers’ interest. Insexts is Bennett’s creator-owned title, and is a creepy Victorian-era horror tale about a woman and her maid/lover, who has mystically given her weird insect attributes that come out when she’s threatened. Like Red Sonja, mixed in with a lot of action (and, in this book, soft-R sex), there’s some (usually) subtle political commentary on the power relationships — sexual, economic and political — between the genders, but it doesn’t get in the way of the story: and Kristantina’s art, well-designed, attractive and clear, helps considerably. 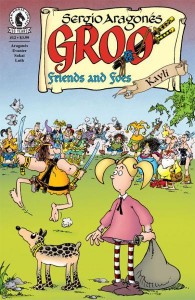 Some other indy books: Groo (a smart book about a stupid barbarian) has been as good as always, with

twelve issues giving it a wider range than the regular four-issue mini-series; in this final installment, pretty much every character in the sprawling cast shows up, often at counterpoint with the others, which culminates in one of those intricate, double-page “Where’s Waldo?”-like splashes that Aragones is so wonderful at.  Rebels continues to be a well-researched look at the American Revolution, with this stand-alone issue a surprisingly-affecting look at one of the “bad guys” (at least on this side of the Atlantic), the 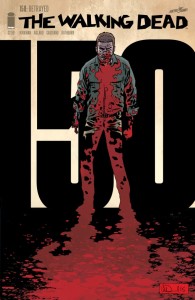 Redcoats.  Finally, The Walking Dead reaches its 150th issue; for their 100th, Kirkman killed a major character (whom I’m not naming because the TV show is just about at that point now, although of course it’s diverged from the book before…); does this new anniversary repeat the process? Considering the cover, would he be bold enough to off Rick Grimes?  It would certainly reinforce the idea that no one is safe, wouldn’t it? Heh… I’m not telling, you’ll just have to buy the comic (or, I suppose, leaf through it in the store) to find out.

With 40 years of experience in comic reading, collecting and reviewing, English Professor Phil Mateer has an encyclopedic mind for comics. Feel free to ask Phil about storylines, characters, artists or for that matter, any comic book trivia. He will post your questions and answers on the AABC blog. His knowledge is unparalleled! He is also our warehouse manager, so if you are looking for that hard to find comic book, ask Phil!
View all posts by Phil →
This entry was posted in New Comics, Reviews and tagged Agents of S.H.I.E.L.D., Avengers, Batman, Green Lantern, Groo, Hawkeye, Insexts, Rebels, Red Sonya, Red Wolf, Robin, Scarlet Witch, Secret Wars, Teenage Mutant Ninja Turtles, Thor, Walking Dead, X-men. Bookmark the permalink.