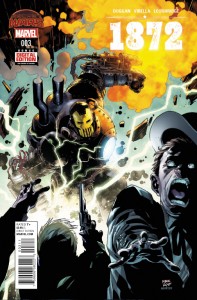 Maybe this Secret Wars marathon really is winding down — only seven books again this week, and all but two are final issues (if Marvel wanted to get us all eager for regular issues of their regular characters, it’s definitely working…).  Captain Marvel is the best of the week, as the book’s longtime writer, Kelly Sue Deconnick, bids farewell to Carol Danvers with a lot of action and heroism, and a hopeful conclusion that’s a metaphor for anyone who’s compelled to push into the unknown to see what’s there; her

editorial at the end, where she individually thanks pretty much everyone ever involved with the book except the janitor and the guys who ran the printing presses, is gracious, touching and a good example of the generosity of spirit that made this book such a fan favorite.  1872, with its alternate-world Western variations of Marvel mainstays like Tony Stark, Bruce Banner, the Kingpin, Bullseye, etc., has been a decent read so far, too — partly because its low-tech, isolated setting means it hasn’t had to worry about Doom, Battleworld or most of the other untouchable trappings of the main Secret Wars series, and instead just concentrate 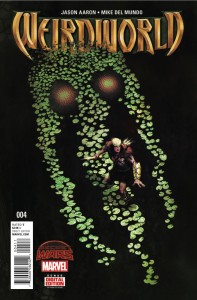 on telling a good story (it’s also making effective use of the new Red Wolf, who’ll be getting his own comic in the Marvel relaunch next month).  This issue has a nice Indiana Jones-ish twist involving Bullseye, sees Tony Stark putting on a suit we all saw coming, and ends with the bad guys forcing Bruce Banner to drink a glowing green explosive liquid he just invented. Now, what could possibly go wrong with that plan…? Inhumans has had a couple of good moments (seeing a normal-talking Black Bolt running an underground bar; its use of Kamala Khan), and manages some decent scenes at the climax here — but then, writer Charles Soule, faced with the 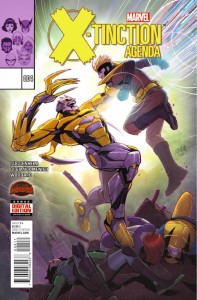 whole “none of this can actually count” problem with these event tie-ins, pulls a fade-out twist that, depending on your point of view, is either a clever reset or an annoying negation of any reason for having bought this series in the first place.  Runaways, on the other hand, offers almost as good an ending as Captain Marvel, thanks to Lumberjanes writer Noelle Stevenson’s realistic teen characterization and ability to combine drama and slapstick humor, and Sanford Greene’s light-hearted, just-exaggerrated-enough art.  Weirdworld, which has been plodding a little so far, ups the energy and clarity levels with this fourth issue, as our hero Arkon meets Jennifer Kale, a swamp sorceress supported by a menagerie of Man-Things, who gets a very 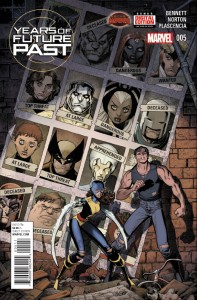 pretty double-page splash introduction courtesy of artist Mike del Mundo, and info-dumps a bunch of what’s-really-going-on plot points all over us. This title is another one that’s going to be part of the relaunch in a month or two, and this issue is the first to suggest that it might actually amount to something.  That leaves the two X-books, both of which conclude this week: X-Tinction Agenda looks good (Carmine di Giandomenico’s lush pencils remind me a little of the Philippine artist Alex Nino) and wraps its plot up with both some major deaths and some hard-earned optimism, while Years of Future Past has a more ambiguous conclusion (one that takes the cliche of a “lady or the tiger” ending literally) and more generic art; this isn’t necessarily an alternate future we’d want to visit again any time soon. 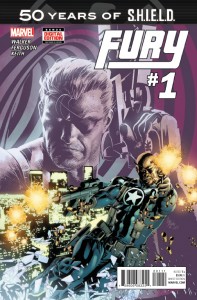 Two other Marvel books — the Nick Fury/ S.H.I.E.L.D. issue makes good use of its 50th-anniversary status, with a time-travel story that unites the current and classic versions of the character, junior and senior, in a caper

involving the Hate Monger and his attempt to assassinate a child who… well,  they never come out and say who it is, but it’s easy enough to figure out.  Deadpool vs. Thanos actually has those two title characters teaming up, to find out who’s kidnapped their mutual love interest, Death. It’s pretty much exactly what you’d think from the title, and a decent enough Wade Wilson fix for fans until his own book starts up again; it also features the Guardians of the Galaxy as guest stars and a page-one recap using action figures that, like a similar scene in the first book, makes me nostalgic for those old Wizard/Toy Fare photo-funny bits. 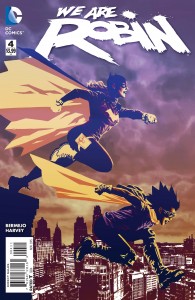 Some decent DC books this week, led by the trailblazing Batgirl, which continues to offer a smart, sleek, very modern take on the character.  This issue’s art, by the French illustrator Bengal (who also drew the recent Batgirl Annual #3, with its sort-of teamup of Barbara and 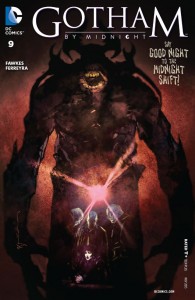 Dick Grayson, and the Batgirl: Endgame one-shot), showcases his ability to combine Japanese, American and European influences into an airy soufflé that’s a good match for regular artist Babs Tarr’s similarly-cosmopolitan style.  Barbara Gordon also guest-stars in We Are Robin #4, as she mentors one of the girl Robins as everyone tries to digest the sobering events of the previous issue. The art’s by another newcomer, the English artist James Harvey, whose very bright, artschool/designer vibe makes his densely-layered pictures just leap off the page; he ups the We Are Robin coolness level quite a bit, and would make a great guest artist on the regular Batgirl

book, too.  Gotham By Midnight, another quirky book about (duh) Gotham City and a police unit that specializes in supernatural crimes, was announced as being cancelled this week. Presumably, it will last another three issues, to twelve: a good thing, because this one offers a game-changing, head-exploding revelation about the Jim Corrigan Spectre character (he’s one of the cops in the occult-investigation unit, now being grilled by a suspicious Internal Affairs) that’s going to require at least another couple of issues to work out, and redeems the comic for its loss of original artist Ben Templesmith (at least, after cancellation, we should be left with two kick-ass trade collections to remember this series 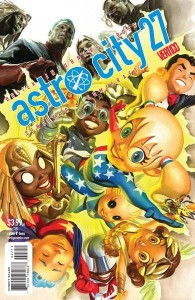 by). Harley Quinn and Power Girl, like Deadpool vs Thanos, is exactly what you think it is: a typical Harley romp, by its regular writers; my only regret is that co-writer Amanda Connor isn’t doing the interior art, especially to draw the self-satisfied, stuck-in-the-’70s alien loverboy Vartox. That leaves Astro City, always a class act, with regular writer/creator Kurt Busiek showing everyone, again, how to do a perfect done-in-one-issue story, this time with guest artist Joe Infurnari, about a character who’s sort of a Powerpuff Girls tribute, but filtered through Busiek’s clever plotting and deep humanism; his obvious affection for his creations makes us feel good when they end up in a satisfying place at the end of their tales, as they do so neatly here. 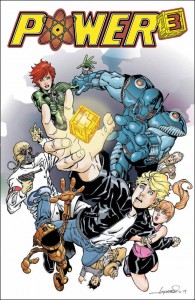 Kind of a light week for indy books, with only one true debut and just four other items of interest.  Power Cubed is a throwback to all those early-’00s Image comics about late-teens kids who get power through some kind of blahblahblah plot device, have fun painting the town red with their girlfriends for a while, have to fight the inevitable bad guys, and eventually learn the old Spidey power/responsibility riff. This one is about an 18-year-old with a dead mom and a distant inventor father, and dad 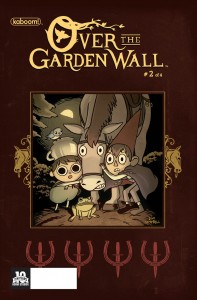 has somehow come up with a cosmic cube (well, they don’t call it that, but it’s a little box that makes any wish reality), and then bad guys get him and the kid escapes with the cube and, well… Lopresti’s been around for a while, so he knows how to tell a smooth, clear story, but this is very rutted and well-traveled road.  Wild’s End is a first issue, too, but it’s a sequel to the same-named earlier series from a year ago, about an anthropomorphic England. The characters, all small-town stereotypes (but, you know, animals) encountered an alien invasion in the first series, and now the Army’s involved, cooping them up in their isolated little hamlet and trying to keep the news from panicking 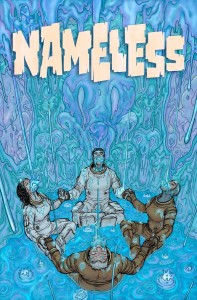 the whole country. Abnett, known for his work on all the cosmic books for Marvel (including co-writing the ’00 Guardians of the Galaxy books that inspired the movie) is very good at creating relatable characters and an intriguing setting, while Culbard is able to make everyone recognizable human without sacrificing their essentially animal faces and personalities; the first series was fun and surprisingly dramatic, and it’s good to see a return engagement.  Over the Garden Wall is a companion to that critically-praised Cartoon Network mini-series, about two kids traipsing through a mysterious enchanted forest, trying to get back to their normal lives and homes; it’s written by series creator Pat McHale, so fans of the cartoon should be 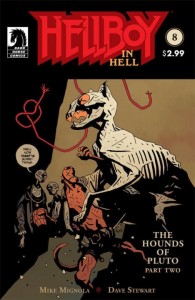 thrilled to get these new stories, written in-between episodes of the series.  Nameless continues Grant Morrison’s cosmic-C’thulhu comic, about a massive alien construct/planet menacing the earth, the astronauts dispatched to examine/destroy it, and the occult expert who’s trying to protect them, only to encounter the ancient evil at its core; it’s at that point in a Morrison book where the hero is in the grip of the soulless anti-life entity, can’t tell what’s real and what isn’t, and has to confront all his inner fears in order to summon up his nonconformist, free-spirited nature and use love and human connectedness to win the day — standard Invisibles-type hippie fantasy, in other words, but done very well.  That leaves Hellboy in Hell, actually drawn by creator Mignola — and, if word is to be believed, leading to a finale for the character; it’s just as good as all the other Mignola-written-and-drawn Hellboy stories, with the added poignancy that creator and creation may only have another few issues together until it’s gone for good.

With 40 years of experience in comic reading, collecting and reviewing, English Professor Phil Mateer has an encyclopedic mind for comics. Feel free to ask Phil about storylines, characters, artists or for that matter, any comic book trivia. He will post your questions and answers on the AABC blog. His knowledge is unparalleled! He is also our warehouse manager, so if you are looking for that hard to find comic book, ask Phil!
View all posts by Phil →
This entry was posted in New Comics, Reviews and tagged 1872, Astro City, Batgirl, Captain Marvel, Deadpool, Harley Quinn, Hellboy, Inhumans, Nameless, Over the Garden Wall, Power Cubed, Robin, Runaways, S.H.I.E.L.D., Secret Wars, Thanos, Weirdworld, Wild's End, X-men. Bookmark the permalink.