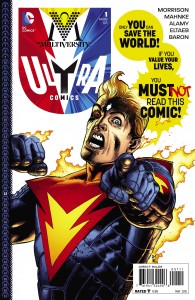 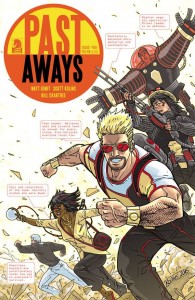 Fewer number-one issues this week than we’ve been seeing, but they cover a much wider range than usual (i.e., none of them are Image science-fiction books). Multiversity: Ultra Comics isn’t actually a debut at all; it’s the eighth issue of Grant Morrison’s DC alternate-universes-collide series, this one a very meta reader-is-part-of-the-plot story. Silver-Age fans will appreciate the cover’s take on Flash #163 (“Stop! Don’t pass up this issue! My LIFE depends on it!”) and the use of a surprising number of DC characters named “Ultra”; otherwise, all the hints and portents related to previous issues get a tad wearying, although Doug Mahnke’s art, so good at making people look creepily (and, sometimes, comically) superior and other-worldly, makes it all zip by quickly (it does feel like it’s time to wrap this thing up, though…).  Past 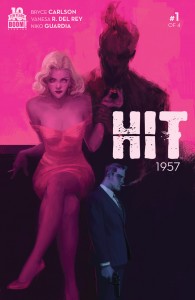 Aways is a new concept from Matt Kindt, and, like his Mind MGMT, is a high-concept book with a lot of action and assorted weirdness; it’s about a dysfunctional team of time travelers who get stranded over a million years in their past… which is our present… and, when they aren’t trying to kill each other, end up battling chronal incursions like a miniature dragon from the future that pees ultra-corrosive acid. As is typical with Kindt, it’s stuffed with little technical-information asides and other enhancements, and Scott Kolins’s very detailed linework is a good match for it. The word “fun” comes up a lot in the editorial pages, and in fact there’s an energetic fizz to its offbeat slant on tropes like high-tech secret 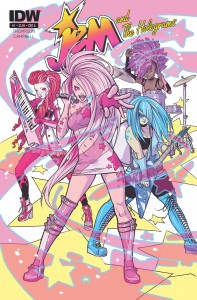 headquarters and bickering, Doom Patrol-ish group dynamics. Hit:1957 is a lot more traditional: a noirish crime book, set in the title year and complete with mobsters, a femme fatale, corrupt police, and a bunch of people getting beat up.  It would dearly love to be Criminal, although its team isn’t quite up to the polished professionalism of Ed Brubaker and Sean Phillips; still, there’s enough small, if expected, pleasures in it to make a decent debut. Jem and the Holograms is a new book based on the ’80s cartoon.  As you might expect, it’s more mangafied than the original, and considerably more advanced in its technology; as you might not expect, its also more sophisticated in its girl power-iness, more a reimagining and updating of the concept than a simple copy, and, ultimately, a better story, one that it will be interesting to watch unfold. 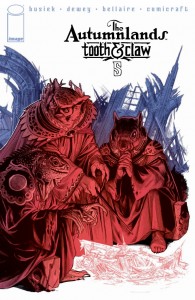 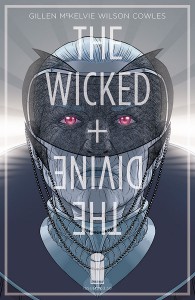 These represent the better indy titles for the week (well, to me, anyway…); Autumnlands: Tooth and Claw continues to showcase Busiek’s tight, extremely well-constructed storytelling; he’s juggling a large cast (many of them working at cross-purposes to the others), a lot of big concepts, and some serious worldbuilding, and so smoothly that he makes it look simple. Dewey’s art, meanwhile, takes a similarly-difficult job — making the anthropomorphic animals of 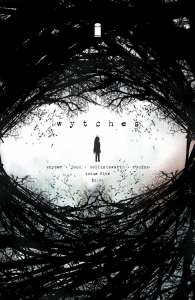 this world look like their natural selves while adding human emotions and attitudes to them — and delivers attractive panels with grace and skill. The Wicked and the Divine continues its tale of mortals who get to incarnate into gods for a couple of precious years… after which they’ll die. There’s not as much action in this issue as some of the others (partly because we see little of Laura, our viewpoint character), but we do get quite a bit of Ananke, the instigator of the whole thing, and we see the pantheon get filled out in surprising fashion — and, as always, there’s McKelvie’s very clean and attractive art. Compare that to Jock’s more shadowy, painterly abstractions in Wytches, more appropriate for that book’s shuddery, almost-

mythological title characters, who are both more and less than their namesakes. Snyder’s tapping into a primal fear here — a parent’s concern for a child in danger — and, with only one issue to go, ramping up both the action and the suspense. Meanwhile, Powers has just rebooted — presumably, the better to attract new readers who might be watching the story’s debut as a TV show on Playstation — and is working on getting its two main characters, Deena Pilgrim and Christian Walker, back together to their default settings as cops and partners investigating super-powered criminals (and, sometimes, victims); the angular, cool-looking Oeming art and the snarky, noir-accented Bendis dialog continue to be its main attractions, as they have 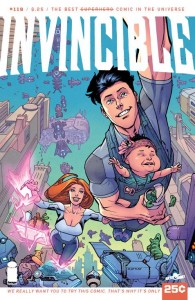 for well over a decade. Invincible, at its own decade mark, is making a push to stop being Robert Kirkman’s “other,” unknown comic: this issue offers a special jump-on price of 25 cents and a new direction, with the title character, his girlfriend and baby daughter starting a new life on an alien planet. Kirkman’s offering a more traditional superhero book here than the horror of Walking Dead or Outcast, and Ottley’s brighter, more open drawing (and Beaulieus’s more-primary colors) help to emphasize that — but what all Kirkman’s books have in common is an ability to cut against where readers think they’re going, the courage to take off in unexpected directions. That’s what this book is doing, and if you’ve never read it, the 25-cent price and the new start make this a perfect time to check it out. 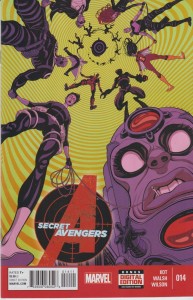 There were a bunch of worthy Marvel books this week, but these two stand out. They’re both good examples of what I think of as the new Marvel style: modern-looking, open panels and layouts; glowing, primary-hued color palettes (it’s no accident that Matthew Wilson is the colorist on both books); stories that are skillful in combining humor, continuity and classic suspense; and a willingness to reimagine their 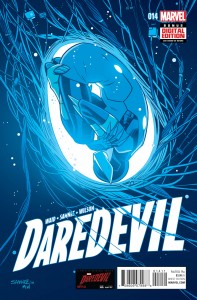 characters, shake the accumulated mold and barnacles off of them, and refocus them for the current ’10s era (thus, Matt Murdock is no longer wearing a costume — but his lawyer suit has a “DD” belt buckle and is all in red, and he takes to the rooftops in that, while in Secret Avengers M.O.D.O.K. has discovered Taoism and resolved to be less of a bully, while Spider-Woman has revealed a talent for solving problems through empathy instead of punching (although Hawkeye, the Black Widow and Nick Fury are still around to handle that end of things too). Superhero comics find it easy to fall into ruts, but books like these offer at least one pathway to their being fun, energetic and even relevant again. 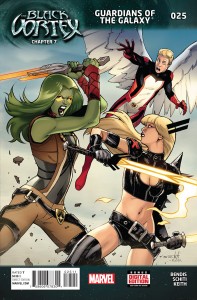 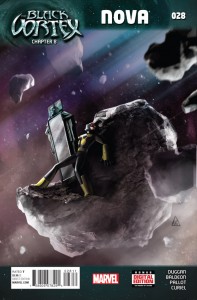 … on the other hand, Marvel’s not that on top of things, or they wouldn’t have released three chapters of this crossover book in the same freakin’ week, especially when they’re all closely related enough that they have to be read in order. Fans of the Guardians are probably reading Star-Lord too (and they should, because Medina’s art is arguably the best of the bunch, plus the Star-Lord/Kitty Pryde romance is cute — 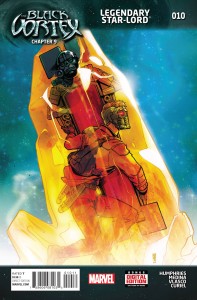 although, knowing Marvel, it’s likely doomed), so it’s the Nova installment to be sure to seek out, and it’s a reasonable introduction to the current version of that character (who will also be starring in the All-New, All-Different Avengers title that will be debuting for Free Comic Book Day in… my God, just five weeks or so). Anyway, a major planet in the Marvel galaxy gets blowed up real good, another gets encased in amber, and there’s a bunch of running and punching and chasing after the Black Vortex, a power-enhancing mirror that’s the title object for the series. Don’t expect a resolution — Chapter Nine just ends with the introduction of more bad guys, setting up yet another fight for the final four chapters in April — but if you’ve been following all of this anyway you should be reasonably entertained. 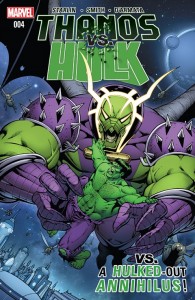 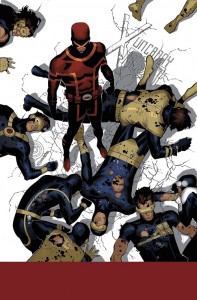 The miscellaneous Marvels — Thanos vs. Hulk is actually Annihilus vs. Hulk, as the series concludes with a massive fight — but, with Starlin both writing and pencilling it, it’s classic, very good-looking fun, with Pip the Troll along to provide commentary (and if you want more Starlin doing Thanos, there’s an ad indicating that the Titan will be appearing in The

Infinity Relativity, another Starlin series starting in June that keeps the now newly-powered-up Annihilus while adding Warlock to the mix). Uncanny X-Men is mostly Cyclops talking to people, especially Emma and his brother Havok (who, hey, is supposed to be evil now, right? I assume that his not showing any of that here is a feature, and not a bug, but I guess we’ll see…), but it’s significant because Scott finally seems to be coming out of his nervous breakdown/”I’m a mutant revolutionary” phase — and, since it’s drawn by Bachalo, it all looks great. New Avengers is a bunch 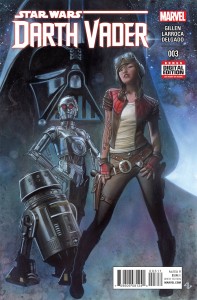 of highly-powered cosmic characters fighting an even-bigger bunch of even-more-highly-powered cosmic characters, with predictable, and fatal, results, as Hickman’s years-long, massive story continues to barrel toward its conclusion, while Darth Vader is the first comics appearance of… some character I’ve never heard of, because I haven’t followed Star Wars stuff for maybe fifteen years, but everybody’s, like, excited about it. I’m more interested in the fact that writer Gillen and artist Larroca are both very good at their jobs, so this book would be worth reading even if the new character was Jar Jar Binks….

With 40 years of experience in comic reading, collecting and reviewing, English Professor Phil Mateer has an encyclopedic mind for comics. Feel free to ask Phil about storylines, characters, artists or for that matter, any comic book trivia. He will post your questions and answers on the AABC blog. His knowledge is unparalleled! He is also our warehouse manager, so if you are looking for that hard to find comic book, ask Phil!
View all posts by Phil →
This entry was posted in New Comics, Reviews and tagged Autumnlands, Avengers, Daredevil, Guardians of the Galaxy, Hit: 1957, Hulk, Invincible, Jem and the Holograms, Multiversity, Nova, Past Aways, Powers, Secret Avengers, Star-Lord, Thanos, The Wicked and the Divine, Wytches, X-men. Bookmark the permalink.