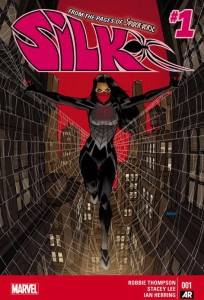 A quartet of first issues for this week: Multiversity: Mastermen is the best (even if technically it’s, like, issue #7 of Morrison’s 52-universe-spanning crossover series), because (a) Jim Lee art, (b) the opening splash is a constipated Hitler on the toilet, reading a Superman comic, and (c) it’s about Earth-10, the world where Kal-El’s rocket from Krypton landed in Nazi Germany territory in 1939, leading to a German victory, a Metropolis in “Germerica,” a “New Reichsmen” instead of a JLA, and an “Overman” instead of a Superman, who’s battling present-day freedom fighters/terrorists (depending on one’s perspective) led by Uncle Sam and other Quality heroes.  As always with Morrison, this is all very carefully worked out, with tie-ins to the rest of his overall story (Uncle Sam’s group is getting aid from a Sivana, which can’t possibly end 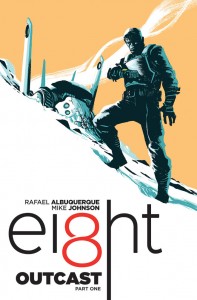 well), and plenty of interesting/creepy bits. Silk #1 is much lighter, both in texture and tone; it stars Cindy Moon, the character from recent issues of Amazing Spider-Man, fresh off of the “Spider-Verse” story, who was bit by the same radioactive spider that got Peter Parker, but then locked in a bunker for a decade because… well, never mind: she’s out, with powers mostly similar to Peter’s but subtly different, and now she’s webslinging and fighting bad guys, trying to find her now-lost family and fit into the modern world. Thompson (who’s written a number of episodes of TV’s cult show Supernatural) and Lee (who’s got an open, slightly cartoony/manga style) put this book firmly in the modern category of comics like the new Batgirl, Hawkeye, She-Hulk, Ms. Marvel, etc. — brightly-colored, fast-moving, fun and attractive to new readers. Ei8ht is a new science-fiction book (published

by Dark Horse, although in style it’s a lot like many of the sf Image comics out right now), about a time-traveller on a mission to the past, except that the trip has damaged his memory, and so he has to figure out his mission while battling to stay alive in a post-apocalyptic, Mad Max-ish wasteland, complete with dinosaurs. Albuquerque, probably best-known for his work on DC’s Blue Beetle, does a good job making the wasteland stuff look appropriately eerie and menacing and awe-inspiring, and the amnesia bit is a good way of making this first issue suspenseful and interesting (just ask all those Jason Bourne fans…). Finally, Mandrake, while a first issue, involves the oldest character here: the King Features comic-strip magician created by Lee Falk in the 1920s. Langridge, who’s worked on Muppets, Popeye and currently, Abigail and the Snowman, is a dependably-good writer, but has a complicated backstory here — Earth has recently been attacked and had its technology devolved by a century or so, making magic much more prominent, and Mandrake is a stage entertainer but also almost 100 years old, and there are other magic users and a demon in a glass jar and… well, it’s a lot to take in, and Treece’s art is sometimes a little too cartoony to make it work (every once in a while it reminds me of Amanda Connor, but not as polished), although he has a couple of good splash panels. It’s all OK, but continues Dynamite’s attempt to make modern stories based on old pulp/comic heroes, like the Green Hornet, the Shadow, etc., and it’s never been clear that those books can build a following; out of all these debuts, it’s the one I’m least likely to continue to follow. 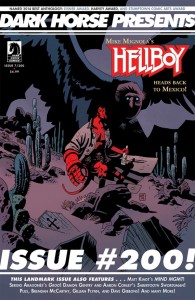 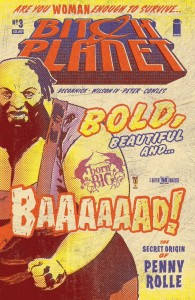 These represent the best of the other non-Marvel or DC books out this week — Dark Horse Presents is an anniversary issue of that anthology, 80 full-color glossy

pages for $4.99, and is a bargain: there’s the Hellboy cover by Mike Mignola (plus a story inside, written by Mignola and drawn by the astonishing Gabrial Ba), plus a Groo story by Sergio Aragones and Mark Evanier, a Matt Kindt Mind MGMT episode, a typically-psychedelic tale by Brendan McCarthy, a mostly-silent, animation-style offering called “Mermaids” by Gustavo Duarte that’s really pretty and skilled to look at, and a story with art by Dave Gibbons — plus four other offerings, and a cover gallery… — oh, and a back cover by 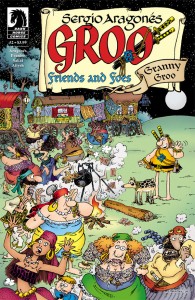 Geof Darrow.  If all of that isn’t enough to convince you to buy the book, I’m not sure what else they can do….  Bitch Planet continues its already-critically-acclaimed combination of women-in-space-prison and female-empowerment treatise, with an origin issue for Penny Rolle, the plus-size, take-no-crap inmate; in doing so, it fills in some of the blanks about its patriarchal society, one that deems uppity women “non-compliant” and ships them off-planet. This kind of thing could be a grim feminist rant, but instead DeConnick gets her points across with humor and style — and guest artist Wilson IV is a good match for that

combination; in a long scene with many of the “fathers” on computer screens judging Penny, one looks like George Bush, one like Dick Cheney, one a little like Hank Hill, etc. — a good example of the sly pleasures this book provides. Autumnlands: Tooth and Claw offers pleasures, too, though of a different kind — Busiek’s story of a plain-spoken, human warrior trying to rescue a world of talking animals has memorable characters, a well-constructed, twisty plot and a leisurely way of spinning its tale that makes it a comic to linger with. Groo, of course, is always Groo, which should be attraction enough; readers might not even notice that behind its stellar Aragones art and bright, comic colors it has plots 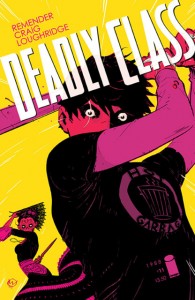 just as artfully constructed as Busiek’s, and insights into human nature that are just as keen. Lumberjanes, meanwhile, continues to be a very modern look at its group of Girl-Scouts-but-they-would-have-sued-us-if-we-called-them-that, with various members of its group facing peril with humor, courage, friendship and sometimes more; look at the cover to see how simultaneously haunting and cute it can be (and, as always, click on it for a larger version). That leaves Deadly Class, whose group of teen assassins is currently battling a bunch of murderous redneck gangsters; it’s as far in style from Lumberjanes as it can be, except that both get their points across by weaving compelling, energetic stories with interesting characters — and so, however different, both are worth reading. 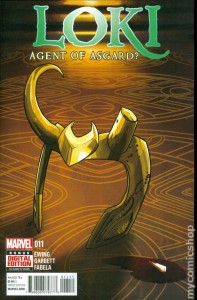 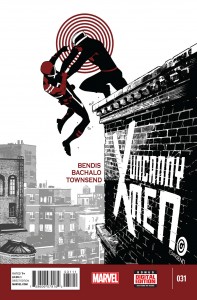 The best of the Marvel offerings for this week — She-Hulk ends its run with a resolution to its central mystery, about the mysterious “blue file,” and while fitting in all the plotpoints before the book’s cancellation makes it seem a trifle rushed, it all makes sense, allowing Pulido’s striking, minimalist art and Vicente’s Dayglo colors to carry the day 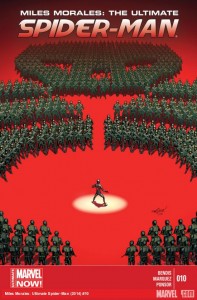 one more time, and leaving its title character and her friends in a satisfying, optimistic place, ready for the next team of creators; this run should yield two decent, perennially-selling graphic novels, not a bad legacy. Loki keeps accomplishing its difficult task of making us care about its damaged, guilt-ridden main character, who right now is about as far down as he can go.  It’ll be interesting to see if its creators can reverse his course, change his destiny and give him some of his old swagger back; so far, watching them try has provided some 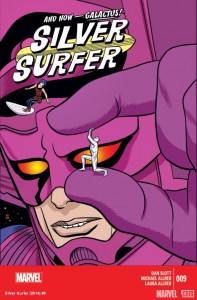 compelling reading. So too for Uncanny X-Men, whose author, Bendis, is beginning to wrap up his tenure on the title. This issue manages to resolve its own seemingly-hopeless cliffhanger (and show why Bendis has been spending so much time on the character of Eva Bell, whose talents prove very useful), and then finishes with a development that changes the whole focus of the book. As always, the Bachalo art makes it worthwhile; the only downside (other than the deus ex machina cliffhanger resolution, with emphasis on the “ex”) is the cover, one of those bait-and-switch, careless-editing deals that features a

character, and scene, that never appear in the actual book. As for the rest, Miles Morales seems to be treading water, waiting for this summer’s Secret Wars and its character’s integration into the “real” Marvel universe, while Silver Surfer goes big in the opposite direction, as the Surfer and Dawn Greenwood try to defend an alien planet against Galactus (which goes about as well as the scene on the cover would have you expect), and Rocket Raccoon concludes a two-parter about Rocket and a companion going on a quest to steal a dragon egg and save Groot’s life in entertaining, if fairly predictable, fashion (Andrade’s art is fine but can’t stop readers from yearning to see Young back on the art again). 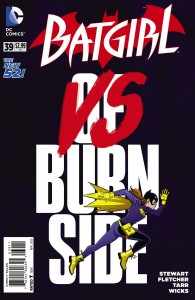 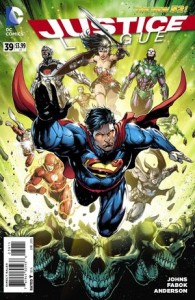 DC offers a couple of comics I liked, too; Batgirl is smart, minimilist enough for new readers to get, but deeper than it looks. It takes a couple of pages, or even issues, to get into the comic’s worldview, but once you do it’s addictive, and 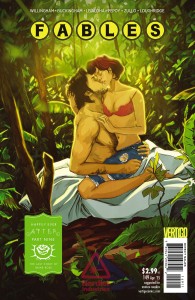 signals at least one version of the company’s future.  Justice League is its old self: just enough good bits to buy it, with the conclusion of the “Amazo Virus” arc establishing a new-52 version of that character, and Luthor and Superman having to work together to beat it. Fables is almost at the end of its 12-year run; it’s hard to see how the saga of Bigby, Snow White and Rose Red is going to wrap things up in one more issue, but this team has accomplished even more impressive things than that in its long history, and it’ll be fun to watch them try.

With 40 years of experience in comic reading, collecting and reviewing, English Professor Phil Mateer has an encyclopedic mind for comics. Feel free to ask Phil about storylines, characters, artists or for that matter, any comic book trivia. He will post your questions and answers on the AABC blog. His knowledge is unparalleled! He is also our warehouse manager, so if you are looking for that hard to find comic book, ask Phil!
View all posts by Phil →
This entry was posted in New Comics, Reviews and tagged Bargirl, Bitch Planet, Dark Horse Presents, Deadly Class, Ei8ht, Fables, Groo, Justice League, Loki, Lumberjanes, Mandrake, Multiversity, Rocket Raccoon, She-Hulk, Silk, Silver Surfer, Tooth and Claw, Ultimate Spider-man, Uncanny x-men. Bookmark the permalink.