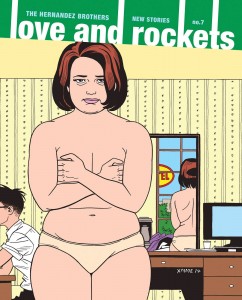 It’s hard to describe just how vital Love and Rockets and the Hernandez brothers were to comics in the ’80s: the magazine lasted for 50 issues over 14 years, from 1982 to 1996, and for a long span every new installment was a leap forward: you could just see them growing in confidence and ability, until both Gilbert’s Palomar stories (set in a Mexican village, with a large cast of characters but focusing mostly on the mayor, Luba, and her many daughters and lovers) and Jaime’s Locas ones (set in a Southern California Hispanic community, and featuring the friendship/romance/punk rock adventures of best friends Maggie and Hopey) had become hilarious, heartbreaking, suspenseful, beautiful and all-around astonishing examples of how, yes, comics could be literature, equal to the best writers and visual artists of any other medium. The brothers have continued those stories, and others, up until today, with their casts aging as time passed, and are still producing awe-inspiring work (2013’s L&R #6, with its Maggie/Hopey serial “The Love Bunglers,” was the first comic in at least 10 years to make me cry); this is 100 black-and-white pages for $15, and worth every single penny — especially if it opens a window to discovering the other 30 years’ worth of great comics these guys have produced. 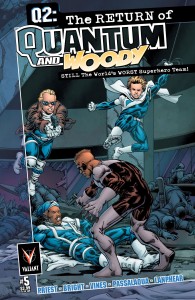 There was a time when Christopher Priest was one of the best writers in comics, and Quantum and Woody was his Howard the Duck: part experimental storytelling, part character study, part satire, all wed to an artist exactly in synch with his style. This is the last issue of Q & W‘s return, and it’s been typical Priest and Bright: a slightly-overbaked plot, with a lot of pieces that needed to click into place and a stubborn refusal to show the characters any sentiment or affection, but then a series of increasingly-satisfying payoffs and an ending that resets the franchise just right. In a year where Boyhood may win an Oscar, it’s interesting that both Q & W and L & R are featuring characters who’ve aged in “real” time, and whose lives their audiences have followed for a couple of decades 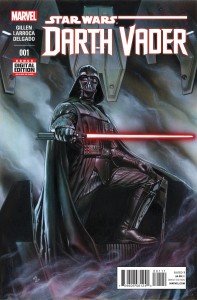 Two first issues for this week: the Star Wars, of course, is totally destined to be a best-seller, with a print run in the hundred of thousands, an A-list writer and artist, and a story set immediately after the end of the first (or fourth, depending on your perspective) movie, as Vader has to answer to the Emperor for the destruction of the Death Star and deal with a number of familiar characters, including  Jabba the Hutt. Gillen is effective at the tightrope act of making his character both sympathetic and villainous, and Larroca’s art keeps the action clear and good-looking, so the book’s success is all but 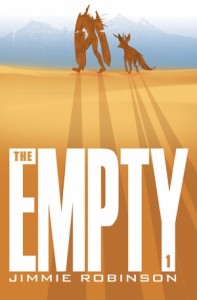 assured. The Empty is on the other end of the comics food chain: a print run in the tens of thousands, by a creator who’s had some past success (Five Weapons, recently, and before that Bomb Queen) but is hardly a familiar name, even in comics-centric households. It’s a quirky sf series about a land turning to desert (because of mysterious, poisonous roots that are encroaching on it), the mysterious outsider who washes up on its shores, and the huntress who fights the intolerant local priests/rulers to help her. It’s nice to see Robinson doing something dramatic and a little ethereal and strange (Bomb Queen, while amusing, was mostly easy-target satire and sexual innuendo), and, like many current Image titles, this is at least worth a flip-through on the stands, and then a closer look. 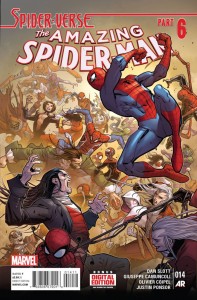 Two Spider-titles: Amazing concludes the Spider-Verse saga that’s been running over the last few months; as often happens with these big events, the resolution falls a little flat (there’s no way the finale can match all the reader anticipation/buildup to it, and, let’s face it, there are only so many ways to conclude a story like that without 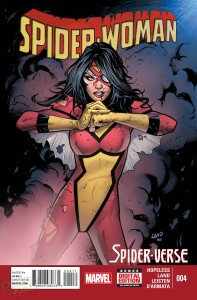 stretching continuity so far that it snaps), but otherwise it’s been a well-constructed, entertaining ride, and a nice tour of the character’s long and checkered history. Spider-Woman spends its first ten pages ending its part in those festivities (and justifying the “Spider-Verse” logo on its cover), and then the last ten setting up a new status quo for Jessica Drew; this gives Land a chance to do what he does best: draw attractive women, including an alternate-world pirate Jessica, plus Silk, plus the Gwen Stacy Spider-Man (OK, “Spider-Gwen,” although that’s a clunky name…), plus Captain Marvel. All of this makes the book look good, and Hopeless gets in a couple of good lines and keeps it all light and fun; that should be enough to bring readers back for the next few issues, at least. 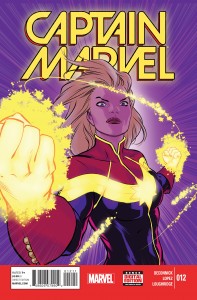 The rest of the Marvel titles for the week: Captain Marvel gets top billing, offering its typical combination of smart scripting and detailed, good-looking art and coloring (the cover’s enough to show Lopez’s and Loughridge’s talents; as always, click on it to see a larger version), as Carol, after a side trip to Earth last issue, ‘ports back to her ship, to 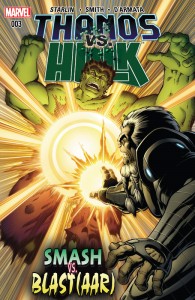 find it deserted and her crew (i.e., her friend and her cat) kidnapped. Her efforts to fix the ship and chase the bad guys propel the issue nicely; my only complaint is for whichever member of the creative team decided to render the snarky onboard computer’s dialogue in green ink on a black background, which makes it almost unreadable. Thor has a striking cover by Russell Dauterman and Matthew Wilson and otherwise, other than a short fight between the new thunder goddess and the Absorbing Man and Titania, is mostly politics and talking, as Odin acts like a dick, Sif 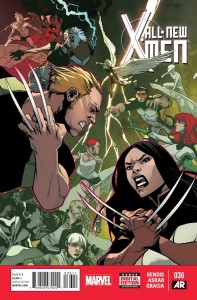 tosses a beer over the Odinson (in a running joke, no one’s sure what to call him at this point — and, in another joke, he gets the beer toss because he’s got a list of women who could be the new thunder goddess — one that matches what fans trying to guess her identity are doing, too — and isn’t very subtle about quizzing her about it), and Freja has a talk with the new title character; it’s a good take-a-breath-between arcs episode. Thanos vs. Hulk has no Thanos but lots of Hulk, as he fights Blastarr and a gamma-energized Annihilus, in typically-stylish Starlin fashion, while Brian Michael Bendis pens two books: All- 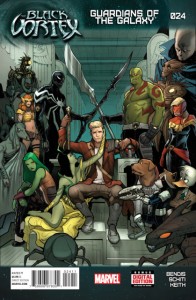 New X-Men finally finishes the alternate-world-traveling story (and lets readers play a game of name-the-timeline, thus warming them up for this summer’s Secret Wars), while Guardians of the Galaxy is the second chapter of the “Black Vortex” crossover that started last week, as the team, plus Kitty Pryde and the X-Men, fight over the title artifact, a magic mirror that grants those who look into it power-ups at the price of lowered moral guidelines (the Guardians, typical gamers, don’t understand why anyone would refuse a status upgrade, while Kitty points out how that’s never worked out too well with the Phoenix Force — leading to an amusing aside by Rocket). All of these are brisk, well-built examples of modern superhero comics, and good evidence of why Marvel always seems to be a little ahead of DC in its loyal fan base. 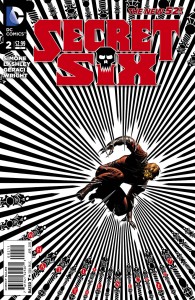 … which is not to say DC doesn’t have some good books, too. Secret Six benefits from Gail Simone’s sly, acidic view of human nature; her damaged-but-relatable villains can warm your heart — just before they rip it out and eat it. Her focal character here, as it’s been for the other iterations of this series, is Catman, and he’s teamed up with the Ventroliquist, Black Alice, Strix, Porcelain and Big Shot (all 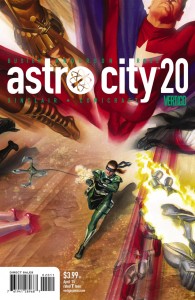 but Catman Simone creations), as the requisite mysterious voice tries to put them through their paces — except that villains, cats especially, are notoriously averse to being herded. Astro City has a much different tone — Busiek has a warmer view of human nature than Simone, and a preference for noble deeds and happy endings, but he can be poignant too, as in this extended story about a team of a roguish guy and a tough, by-her-bootstraps woman, both crimefighters (think Green Arrow/Black Canary or, at the other big company, Hawkeye and Mockingbird), and the woman’s growing realization that they’re getting too old for this stuff, and need a second (or third) act; especially as drawn by Anderson, the story’s got a wise, weary and hard-won humanity to it, which makes it, like the bast tales, both entertaining and thoughtful. 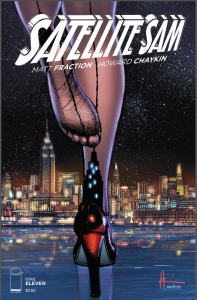 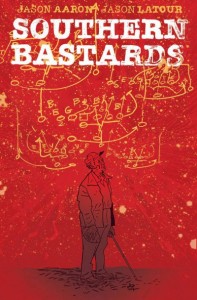 Two Image titles, good examples of the variety that publisher’s open, creator-friendly deals encourage. It’s been a while since a Satellite Sam isssu, and the book’s large soap-opera cast doesn’t reward long delays, but the Chaykin art and sharp portrait of the early years of television make it worthwhile (so does the cover, another image here worth seeing in its larger size).  Southern Bastards offers a similarly-precise portrait of a deep-South, football-obsessed small town; Latour is impressionistic where Chaykin is realistic, but his splashes of color and noirish angles are just as striking — and check out that cover…. 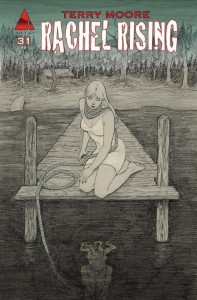 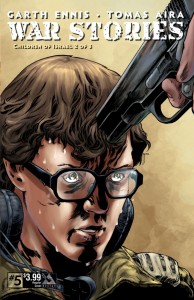 Two grouped just because they’re the last two — Rachel Rising is what Strangers in Paradise would have been if it were a supernatural-horror comic, while War Stories is exactly what it says it is, offering a typically well-researched, Harvey Kurtzmanesque middle installment of a tale about an Israeli tank commander during the Yom Kippur War. Both books are solid examples of long-running series, so they’re worth a look, too: if you like them, there’s a lot more similarly-good reading where they came from.

With 40 years of experience in comic reading, collecting and reviewing, English Professor Phil Mateer has an encyclopedic mind for comics. Feel free to ask Phil about storylines, characters, artists or for that matter, any comic book trivia. He will post your questions and answers on the AABC blog. His knowledge is unparalleled! He is also our warehouse manager, so if you are looking for that hard to find comic book, ask Phil!
View all posts by Phil →
This entry was posted in New Comics, Reviews and tagged Astro City, Captain Marvel, Darth Vader, Guardians of the Galaxy, Love and Rockets, Quantum and Woody, Rachel Rising, Satellite Sam, Secret Six, Southern Bastards, Spider-man, Spider-Woman, Thanos vs. Hulk, The Empty, Thor, War Stories, X-men. Bookmark the permalink.