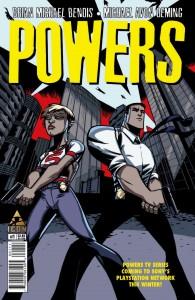 These are the week’s first issues that caught my eye — although two of the three are relaunches, not debuts. Powers, for example, has been around for well over a decade — but it’s going to be a TV series starting in March (on the Playstation Network, so good luck finding it unless you’re a gamer…), and co-creators Bendis and Oeming have knocked off some of the accumulated continuity and reformatted it back to its original concept: a police procedural, but on a world where some people have super-powers. That’s a sturdy premise (Law and Order: Super-Powered Homicide) and Bendis and Oeming have always made it 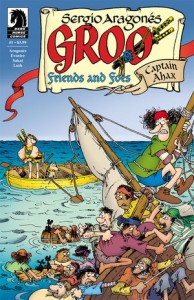 a stylish, noirish romp, with lots of chemistry between their two leads, Detectives Deena Pilgrim and Christian Walker, and a good mix of action, banter and day-to-day police life in a world where the cops have to deal with everything from petty criminals with minor electrical powers to cosmic-level bad guys. If you’ve never sampled this series before, buy the comic; if it looks intriguing then the first trade (Who Killed Retro Girl?) from the early 2000s is the best place to see what the TV show might be like. Groo has been around even longer than Powers (more than 30 years) and generated hundred of issues chronicling its title character, a dim swords-for-hire barbarian who wanders through, and inadvertently destroys, the towns and countries of a Hyborian-age-type world. Its popularity, and quality, is largely thanks to Aragones, a national cartooning treasure whose obsessively-detailed, always-clear slapstick style (and fond-but-cynical view of human nature) is a magnet for readers. Last year’s four-issue Groo vs. Conan had to spend perhaps too much time justifying its premise, but this year’s run is focusing just on one-shot stories (each 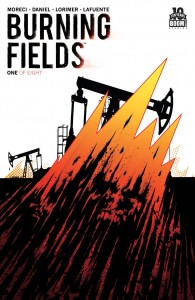 issue, Groo has an encounter with an old acquaintance, the “friends and foes” of the subtitle), and this first one offers a perfect example of the book’s charms, as Groo runs into Captain Ahax, the mariner whose ships he inevitably sinks. This time out, Ahax tries to use that destruction to his advantage, and the result is a Producers-like farce that’s very smoothly constructed, all the small plot pieces building to a very logical, and very funny, climax.  Finally, Burning Fields, the only brand-new book, is billed as “Zero Dark Thirty meets The Thing“; it’s set in Iraq, where an ex-Marine investigator has come to look into a series of grisly murders at an oil field run by Verge, a Blackwater-like American company with a shady history (and a field commander with whom she’s had prior, and bloody, encounters). She teams up with an Iraqi police detective and, if the “Thing” quote is to be believed, they’ll end up encountering supernatural horror, although this first issue sees them dealing with more earth-bound annoyances. Decent characterization makes the two leads sympathetic, while Larimer’s art is shadowy and grim enough to handle the couple of killer scenes effectively, and make this a book that action/suspense/horror fans will want to check out. 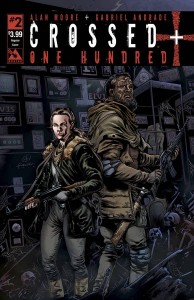 Two series still in their early stages; Crossed Plus One Hundred continues to be typical Moore (a good thing), as we watch his small band of explorers (which gets smaller each issue) trek through the still-Crossed-infected American South of the 22nd century, looking for clues about what life was like before the apocalypse. Moore’s focus on character and fascination with language continue to come through, as the plucky heroine’s diary, and the 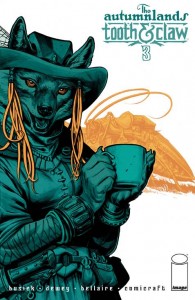 words people speak, are understandable but… altered from present-day speech, in interesting ways. Autumnlands is well-written-and-drawn high fantasy, about a world of anthropomorphic animals where magic rules, but is waning, and they’ve drawn a “Great Champion” from the past to help them who, to their horror, turns out to be a human. Busiek has created a rich, full world, and Dewey’s art matches it (look at the cover, featuring new character Madame Goodfoot, a female fox who’s a trader and something of a con artist, to see how good he is at drawing complex, just-human-enough animals). Both of these books have enough careful attention to detail, and clever world-building, to repay second and third readings. 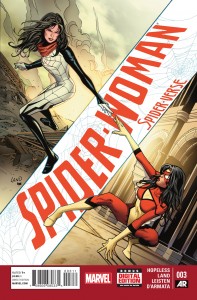 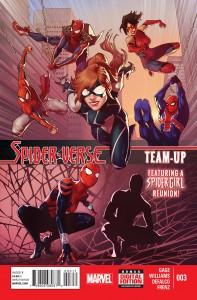 Four Spider-Verse tie-ins in one week (Marvel’s sense of timing for their book releases not being the best); the first three should be read before Amazing Spider-Man, which offers the penultimate chapter of the main story.  Spider-Woman focuses on Jessica Drew on the bad guys’ main world, passing herself off as her doppleganger, and guest-stars the Gwen Stacy Spider-Person and the main Marvel 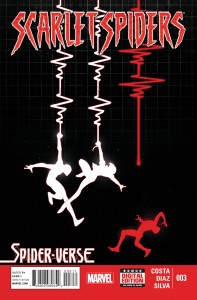 world’s Silk, which plays to Land’s one strength by giving him a chance to draw three attractive women. Team-Up‘s first story looks at most of the main spider-characters, as they find an unlikely ally, but the bigger attraction might be the second story: it reunites the longtime Spider-Girl story and art team of Defalco, Frenz and Buscema, and readers who’ve followed that title the last decade or two should be interested in seeing their take on May Parker again. Finally, Scarlet Spiders follows three of the “cloned” spider-people — a Ben Reilly, a Black Widow and the “real” Marvel Universe’s Scarlet Spider — as they come up with a plan to cripple the bad guys’ ability to escape death — leading to one of the heroes dying instead 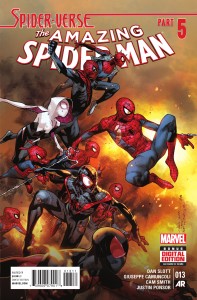 (as reflected in the striking, stylish cover by David Nakayama). That leaves the main Amazing Spider-Man title, which, as the next-to-last installment, consolidates all the other books’ events and moves everything into place for the final battle next issue. Although this whole thing may have dragged on a tad too long, it’s been undeniably fun to encounter all those alternate, what-if universe versions of our own webslinger; the creative teams’ obvious fannish delight in researching all the previously-seen versions, and figuring out how to combine them, has injected enough energy into the story to keep it a fun, fast-moving piece of entertainment.

Three Guardians book in one week, too (seriously, the people who schedule Marvel’s weekly shipments of comics

need to buy a couple of flow charts, and a clue…). The main book offers major developments in the life of Flash Thompson/Venom, as the team travels to the Symbiote Planet and a much fuller origin of that alien race is given, one that makes them considerably different than readers might have expected, and leaves “our” Venom significantly changed from what he was before; in addition, there’s a last-page reveal that promises a seismic shift in the fortunes of another member of the team, too, at least temporarily. The book’s cover, by Christian Ward, has nothing to do with the interior, but is such a cool portrait of Rocket that it’s doubtful anyone will complain (as with all the covers in these reviews, click on the image to see a much larger 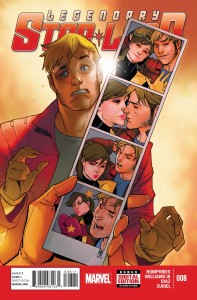 version). The not-quite-a-raccoon’s own book has a similarly imaginative, eye-catching cover, while the interior sees him marooned on an ice planet with a slowly-dying Groot, whose only cure involves a quest and a dragon; Scottie Young provides the story but not the art, which is too bad, although Andrade offers a reasonably-OK substitute, in a similar style.  Legendary Star Lord should be fun for Kitty Pryde fans, since she and the title character get together and become an official item in this issue (although, as the cover indicates, the course of true love isn’t necessarily a smooth one); the story also serves as a lead-in to “The Black Vortex,” a cosmic X-Men/Guardians event that starts with an “Alpha” issue next month, winds through the various groups’ titles until April, and then ends with an “Omega” issue after that. Will it be any good? Start here to see…. 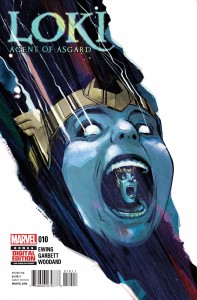 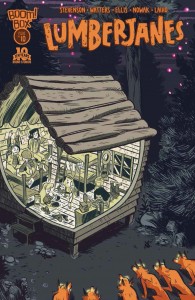 The best of the rest — at least for me; Loki sees the trickster god no longer able to lie (because of the events in Axis), or to evade the truth at all, which means he finds himself compelled to confess his “murder” of his previous pre-teen incarnation to his brother Thor — and, as one might expect, 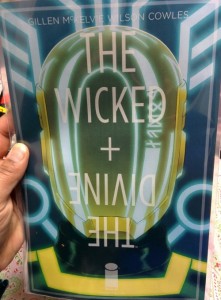 it doesn’t go well. Lumberjanes continues its mini-run of guest artists, as the campers have a free day and everyone splits into smaller groups; Molly and Mal go off to explore the woods on their own, and run into the biggest adventure (as one indication of why this is such a well-written book, note the gentle and subtle way the kind-of mutual crush between them is portrayed). The Wicked and the Divine just keeps being, quietly, one of the best books on the stands, with 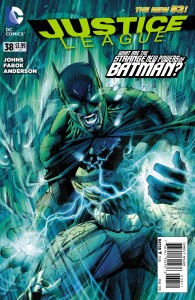 its ever-expanding cast of temporary gods, its fizzy pop-culture vibe and its underlying dead-serious themes, while Justice League, always something of a guilty pleasure, is in a small rut right now (you can take a two- or three-issue plot and pad it into a six-issue trade when your artist is, say, Jim Lee, but not with most others, and this “Amazo Virus” arc should have been worth three issues at best). More points off for the cover, which advertises a super-powered Batman who has those powers for one panel in the actual book (granted, that panel is a two-page splash, but still…).

With 40 years of experience in comic reading, collecting and reviewing, English Professor Phil Mateer has an encyclopedic mind for comics. Feel free to ask Phil about storylines, characters, artists or for that matter, any comic book trivia. He will post your questions and answers on the AABC blog. His knowledge is unparalleled! He is also our warehouse manager, so if you are looking for that hard to find comic book, ask Phil!
View all posts by Phil →
This entry was posted in New Comics, Reviews and tagged Autumnlands, Burning Fields, Crossed Plus One Hundred, Groo, Guardians of the Galaxy, Justice League, Loki, Lumberjanes, Powers, Rocket Raccoon, Spider-man, Spider-Verse, Spider-Woman, Star-Lord, The Wicked and the Divine. Bookmark the permalink.