The week between Christmas and New Year’s is traditionally very light, and this one’s no exception — but, fortunately, there are still some comics worth mentioning:

Langridge has delivered a lot of quality humor/bigfoot books over the last few years; his dry British wit and adaptable art made him perfect for The Muppets, and he pivoted from that to a pitch-perfect Elsie Segar-inspired Popeye. On his own, he also produced Snarked, a Lewis Carroll pastiche, and now this: a story about a little girl who meets a cultured, pipe-smoking yeti on the run from government capture; one twist is that he can cloud adults’ minds to become invisible to them, but it doesn’t work on kids, so they can see him while their parents can’t. There’s just enough pathos mixed in to keep things from getting too sweet (the girl’s being raised by just her father, an unemployed electrician, and since they’ve moved she’s having trouble fitting in or making friends), and decent characterization — even the bad-guy government agents aren’t so much bad as just dogged and borderline incompetent, so everybody’s doing what they think is right. Grown-ups can enjoy this just fine, but if you know any pre-teens you’d like to encourage to read comics, this would make a charming, well-done late holiday present.

This is the TV show, but with the unlimited special-effects budget only comics can provide, and Waid’s just the right guy to helm it: he’s got a knack for cutting to the heart of all of his main characters, and here he uses it to show how Agent Coulson’s defining assets are his unflappable ability to figure things out under pressure, and his extensive fan’s knowledge of the super-hero community. Pacheco’s solid, middle-of-the-road style is good at both the pyrotechnic super-fighting and the more human-scale doings of the TV crew, and, while the spotlight is solidly on Coulson in this debut (only Fitz gets any serious panel time otherwise), this delivers just about anything else fans of S.H.I.E.L.D., in any medium, would want from a first issue. 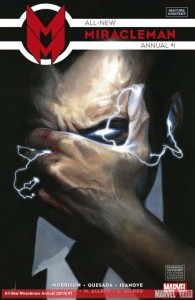 Both stories provided in this annual are, as the title proclaims, “all-new,” although the first one is also old: Morrison wrote the script for Warrior magazine, the original British home of Miracleman (then Marvelman) in 1984, but the publication went under, and the story was never illustrated or used. Enter Marvel boss Joe Quesada this year, who prevailed upon Morrison to find the “lost” story and now has provided the art for it. It’s a Beatles-era look at an already-corrupted Johnny Bates (acting more like Norman Bates), willing to keep his superhuman secrets at any cost.  The second story is a tribute to the original Marvelman tales from the ’50s and ’60s; Milligan’s from the British Isles and knows them well, while the Allred art, with its modernist, streamlined take on the Silver Age, offers just the right balance of styles to make it work.

This is the first of this title’s “Year Two,” the first 15 issues having introduced its alternate-history timeline and its sprawling, myth-drenched cast of characters. In addition to the “regular” cover, there are eight others: seven of them represent the Seven Nations that the US has splintered into, and they interlock to form one big image; the other is 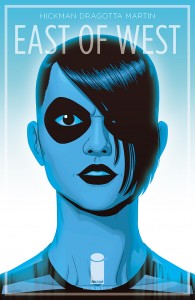 by Jamie McKelvie, in his The Wicked and the Divine cover style. Hickman being Hickman, that’s not the only complexity here, as two of the nations engage in a bloody, one-sided war, and everyone deals with its dominoing effects. If you’ve been ignoring this book for a while, this is a good time to check back in, to appreciate both Dragotta’s clean, effective art and the way Hickman combines it with his pithy dialogue to maximum, and powerful, effect.

In any other week, these three would fly under the radar, but let’s look: Trek/Apes is almost exactly what you’d expect; the first issue is a lot more Trek than Ape, as blah blah Klingon ship blah dimensional gateway blah arms-running from Klingons to the bad general ape guy etc. If it doesn’t make any sense, remember that this is a franchise that’s embraced outer-space versions of the Roman Empire and the American Revolution, and just flow with it; with the setup out of the way, next issue should be where most of the real action starts. Batman: Eternal and Futures End are two of DC’s three weekly series (I’ve lost touch with the Earth-2 one), both 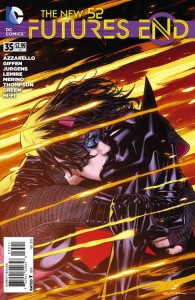 currently closing in on the 3/4 mark; Batman: Eternal is in slightly better shape right now, with its striking cover (click on the image to see it in detail), its relatively-tight focus on Bruce Wayne’s declining fortunes in Gotham City, and enough different bad guys and plot threads to keep up reader interest.  Futures End has a more sprawling cast and plot, involving both near-future and further-future characters fighting to alter their timelines. Although the time-swept story’s made it hard to work up much enthusiasm for most of the  characters, who seem likely to pop like soap bubbles by story’s end, a couple of them get good scenes in this issue, especially Fifty Sue and Lana Lang. Mostly, though, this has become a Batman: Beyond story, and on that level is fine; fans of that title should definitely take note of this week’s episode.

With 40 years of experience in comic reading, collecting and reviewing, English Professor Phil Mateer has an encyclopedic mind for comics. Feel free to ask Phil about storylines, characters, artists or for that matter, any comic book trivia. He will post your questions and answers on the AABC blog. His knowledge is unparalleled! He is also our warehouse manager, so if you are looking for that hard to find comic book, ask Phil!
View all posts by Phil →
This entry was posted in New Comics, Reviews and tagged Abigail and the Snowman, Batman Eternal, East of West, Future's End, Miracleman, Planet of the Apes, S.H.I.E.L.D., Star Trek. Bookmark the permalink.