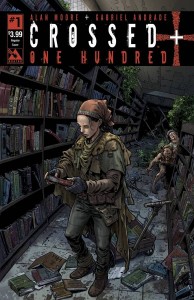 A new series by Alan Moore is always cause for celebration, although here he’s playing in Garth Ennis’s zombie-apocalypse-ish Crossed sandbox, not creating something brand-new. As the title suggests, the story’s set in the medium-distant future, 100 years after the initial outbreak of a virulent infection that transformed its victims into homicidal maniacs and crashed civilization.  Moore’s always been a very brainy writer, effective at both world-building and at wordplay, and both are in evidence here, as we follow Future Taylor, the steady, curious young woman who’s writing a diary about her experiences with a small group of explorers who are scavenging for knowledge from before the collapse while navigating all the hazards of the Crossed countryside. It’s almost worth it just to see how Moore thinks the language would have changed in a century, and what those changes say about the new world — the explorers call the small family units of feral infected people they encounter “illbillies,” and while we’re programmed to cheer when they kill them, there are also subtle, disturbing comparisons to how European settlers treated the first American natives they encountered. All the slang and changed usages take a while to get used to (“fuck” is no longer seen as an obscenity, and I’m still not sure what’s going on with “AFAWK” — an acronym? “As far as we know”?), but, as with similar linguistically-extrapolated science fiction like A Clockwork Orange, it eventually seems normal, and allows us to enter the characters’ universe even more fully. Andrade offers solid, even lush, art that illuminates without getting in the way, and this is an often-quiet, sometimes-violent and very effective first issue. 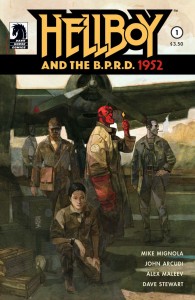 With the current Mignolaverse undergoing an apocalypse, and Hellboy in Hell, this series looks back at his beginnings with the B.P.R.D., as a late-teen who’s on his first assignment with the team in 1952, investigating mysterious supernatural killings in Brazil. Maleev has a shadowy, impressionistic style that’s perfect for the occult goings-on, and it’s refreshing to read a Hellboy tale that’s a straight adventure, and doesn’t require knowledge of the last ten years of continuity to appreciate. 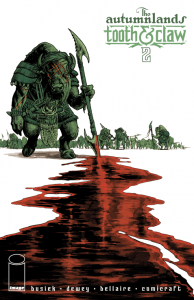 This was just “Tooth and Claw” for its first issue, but apparently ran into some prior-trademark problems; hence, the modified title. It’s the same story, though — on a world of anthropomorphic animals, magic works, but is slowly disappearing. In the first issue, all the wizards got together to try to summon a champion to help them (in fact, The Champion, the legendary, unknown figure who brought magic to their world in the first place, ages ago), but screwed up, crashing a floating city and killing hundreds of people. Here, they find that they did summon their hero, only to be horrified when he turns out to be (wait for it…) a human, strange and repulsive-looking to them, and with no fur, fangs, claws or other ways of protecting himself. We can see the outlines of where this is going, but the pleasure is in the details, and Busiek’s easy, precise characterization and knack for fantasy, along with Dewey’s ability to draw great-looking humanoid creatures of various types (I like his cranky and clueless owl wizard, especially), should help to attract a devoted audience. If you like books like Saga, give this a try.

This book could have been an exploitive disaster, but fortunately Marvel was smart enough to give it to Gillen, who’s proved to be a good tale-teller using Asgardians (see his Young Loki, both in Journey Into Mystery and the criminally-underappreciated Young Avengers), and has a high-fantasy style that suits the character well (if you haven’t been keeping up, it turns out that Angela is Thor and Loki’s long-lost sister); mix in the Jimenez/Palmer team’s classically-heroic-salted-with-Heavy Metal art (it sometimes reminds me of John Buscema), and this is an appealing first issue, with action, information on the title character’s background and a twist ending that blend smoothly into a good story. 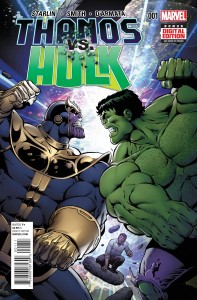 For some comics, the credits should be enough. Why would you not want to read a mini-series where Starlin, Thanos’s creator, writes and draws what happens when the Hulk is kidnapped by Annihilus, and the purple, craggy-chinned Titan, egged on by Pip the Troll, decides to get involved? Exactly! 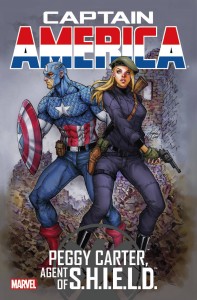 This is a reprint volume, collecting most of the Captain America issues involving Cap’s first girlfriend from the WW II era, Peggy Carter (why should we care? Because Marvel’s Agent Carter, a seven-episode mini-series involving this character in the post-war ’40s helping to found S.H.I.E.L.D., debuts on ABC in January). There’s the Captain America and the First Thirteen one-shot, by Kathryn Immonen and Ramon Perez, that covers their first meeting, during the war (and has a very-newly-minted Cap speaking in stilted pseudo-heroic dialogue), a few pages from the 2011 Captain America #1, by Ed Brubaker and Steve Mcniven, and the the good stuff: the Silver Age introduction of Peggy from Tales of Suspense #77, by Stan Lee, Jack Kirby and John Romita (Kirby doing the layouts), and her Bronze-Age reintroduction from Captain America and the Falcon #184-186, written by Steve Englehart and drawn by Herb Trimpe (in # 184) and Frank Robbins (in the other two). That’s a wide-ranging buffet of styles — of course the Lee/Kirby/Romita is good, but it’s nice to see the Englehart era represented, especially with Robbins’s unique, high-energy art; he does a great Red Skull — and more than enough to justify the book’s $8 price. 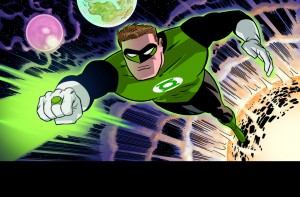 These are the DC books of the week with Darwyn Cooke alternate covers, a rare case where it doesn’t even matter what’s on the inside, because those outsides (with a striking, effective 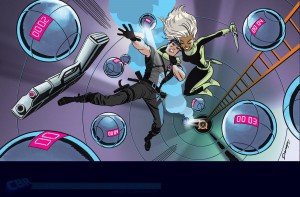 sideways trade dress, giving the images a widescreen impact) are worth the $3.99 each by themselves. How are the books? Detective, mired in the current Bruce-Wayne’s-on-the-skids continuity and features the Mad Hatter, is the most “eh”; Green Lantern has Hal Jordan and the necrophiliac Black Hand teaming up against the New Gods, as part of a continuing crossover, and is fun enough to make you want to keep reading 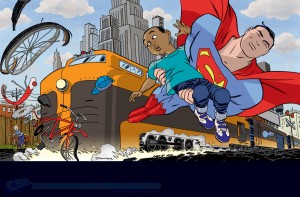 subsequent chapters; Grayson has an effective one-shot tale of Dick and the Midnighter having to save a baby by treking across an enormous, punishing desert, while Action has Superman, trying to clean up after the just-finished “Doomed” arc, dealing with Lovecraftian menaces in Smallville.  None of these stories are reflected on the covers, though — those are perfect little one-panel stories in themselves, showcasing the essences of each main character (the whole month’s worth of these, all mounted on a wall, will look incredibly cool…  click on the pictures here to get the full effect). 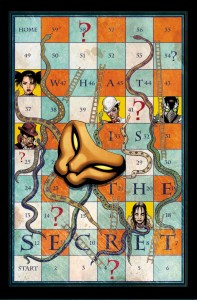 This is Simone’s third (really fourth) volume of this title, all focusing on life on the super-villain side of the DC universe.  They’ve all been grim morality tales, sprinkled with humor and a taste for the grotesque, and represent one of the better series of the ’00s.  Thomas (Catman) Blake is the only returning character so far; he’s a classic conflicted anti-hero with a personal moral code but a propensity for violence, especially when he’s confined. Naturally, this debut sees him kidnapped and thrown in a prison with a number of other characters, some new and some familiar (Black Alice and a woman who turns out to be a Batman villain are the most recognizable), and then things happen, ending on a cliffhanger.  Lashley offers nicely-detailed art, especially when he’s inking himself, and he’s especially good on Blake/Catman. Simone’s style is to introduce us to a bunch of interesting, damaged and potentially homicidal characters, and she does that very well here; it’s nice to see this comic back (if you like it, check for all the Secret Six trade

Fairly standard lone-werewolf thriller, heavy on the B-movie horror influences, especially the gore; if you remember the David Lapham/Gabriel Andrade Ferals from a year or two ago, it’s squarely in that neighborhood, but being under the Vertigo imprint classes it up a little (click on the striking cover to your right, for example).

Written by a fan, which is good — it’s not a parody of itself, but an affectionate recreation, giving an origin of sorts for our hero.  John Shaft turns out to be Daredevil’s dad (or Bruce Willis): a boxer in thrall to a gangster, who’s told to throw a fight and defiantly wins it. This first issue, like most origins, has him reacting more than acting; presumably the next few issues will have him turning into the smooth, badass private eye of the ’70s movies. There are a number of covers to this first issue; the best are the main one, with Denys Cowan pencils over Bill Sienkiewicz inks, and the B cover by Francesco Francavilla (of deserved Afterlife with Archie fame). 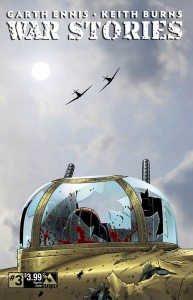 End of the first story; it’s OK, although when you’re doing American/British bomber crews during WW II, you’re competing with Catch-22, and are left with very little new to say, especially when you’re mining the same grim-humor vein as Joseph Heller. Looking forward to the next one, though….

This has turned into a leisurely-told, very full story, with art that lets you linger on its underwater-pirate-headquarter and monsters-from-the-depths scenes, and a main character with a fierce, unflinching optimism that’s easy to root for. If it can stick the landing for its first full episode next issue, it should be a candidate for new series of the year, and set up for a nice run.

With 40 years of experience in comic reading, collecting and reviewing, English Professor Phil Mateer has an encyclopedic mind for comics. Feel free to ask Phil about storylines, characters, artists or for that matter, any comic book trivia. He will post your questions and answers on the AABC blog. His knowledge is unparalleled! He is also our warehouse manager, so if you are looking for that hard to find comic book, ask Phil!
View all posts by Phil →
This entry was posted in New Comics, Reviews and tagged Angela, Crossed Plus 100, Darwyn Cooke, Hellboy, Hulk, Low, Secret Six, Shaft, Thanos, Tooth and Claw, War Stories, Wolf Moon. Bookmark the permalink.