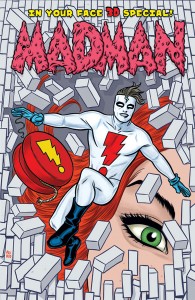 When is a comic worth $10? When it’s this package: 80 pages of stunning 3D work, with glasses included. Allred is a wonderful artist anyway, and it turns out that his generous, open compositions make him a perfect candidate for the 3D separation process. He’s also a brainy creator with a vast knowledge of comics history: witness the first reprinted story here, “Swiped from Dimension X,” wherein every panel is drawn in the style of a different comics creator, from newspaper-strip legends like Elsie Segar and Charles Schulz all the way to modern high-profile artists like Frank Miller and John Byrne. The second reprint, “Become As They Are,” is a running battle told entirely in double-page splashes, which make for deeply-dimensioned, eye-popping special effects when converted to 3D. Then, mix in a number of full-page pinups and covers (also all converted to 3D, as is every page in the book, including the covers), and a new story by Allred, and this would make a great Christmas present for any cartooning or comics fan.  The book’s introduction says that it was “years in the making,” and that’s easy to believe; it’s an amazing achievement. 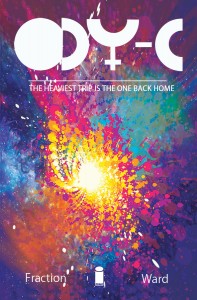 In any other week, this would be the top jaw-dropping product: it opens with a 16-page foldout: an eight-page splash of the main characters, women warriors who’ve just emerged victorious from a long campaign, while on the back there’s a four-page history of the just-concluded war, plus a four-page space map of the star systems where they fought. Now, they have to begin a long journey home, and if you pronounce the comic’s title out loud you might be able to guess what Fraction and Ward are up to here: a retelling of The Odyssey, except instead of Greek warriors in the past it’s set in the future, in space, and in a matriarchal civilization that means all the main characters are women instead of men. This is most definitely not a Classics Illustrated summary, either; it’s clear that Fraction is going to be telling this over a long time, and that he’s not taking shortcuts: he’s even writing the captions and most of the rest in the heroic hexameter style of the original Greek. Add in Ward’s painterly, imaginatively-composed pages and hallucinatory coloring, and this is a dense, high-quality story that’s both clever and fun. As a bonus, this first issue, at the regular comic price of $3.99, offers 27 pages of art (in addition to that 16-page foldout), plus a couple of pages of editorial content. Reward this kind of hard work and willingness to trust the audience’s good taste, and buy this comic. 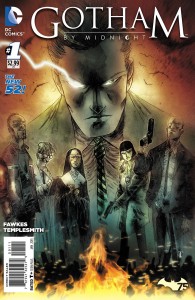 This is a Gotham City police procedural, but with a twist: the crew of Precinct Thirteen handle all the spooky supernatural cases, helped by an occult forensics specialist, a nun, and Officer Jim (Spectre) Corrigan — although the other members of his team may not know about his alter ego. The book starts with a sergeant from Internal Affairs investigating the unit (since they never actually arrest anyone, and their reports make little rational sense), and then, skeptical, he tags along on a case, and… well, you can guess what happens; it would be fun anyway, since Fawkes is a solid writer, but the main attraction here is Templesmith’s art: the eerie and the weird are his specialty, and his impressionistic, shadow-splashed panels enhance the already-smart plot, and make this an offbeat treasure. This is another comic that should be rewarded by readers, especially anyone tired of DC’s tendency to coast on cookie-cutter corporate art: buy it, and maybe they’ll take more successful chances like it. 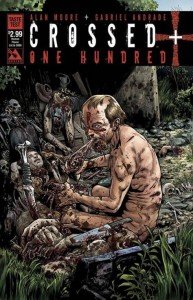 This is a promo for the Crossed mini-series that Moore’s doing in a few months; it starts with two pages of him praising Garth Ennis, and talking about how he sees the Crossed universe, and then offers his script for the first two pages of the first issue (which, being Moore, takes up three pages), plus a page on his thoughts about his main character, followed by eleven pages of art, both rough pencilled pages and finishes. It’s $2.99, but limited to 5000 copies, so if you’re any kind of Moore or Crossed fan you’ll want to get it fast. 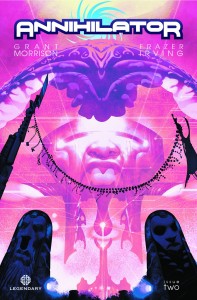 When the third issue of this mini-series came out last week, I couldn’t remember if I’d read the second or not, but just dove in anyway; it turns out that our distributor shorted us on all the second issues, and they just came in this week. If any writer can handle being read out of order, though, it’s Morrison; his plots are carefully-constructed, but often presented non-linearly anyway. This does clear up a lot of questions, though, as main character Ray Spass, a Hollywood screenwriter who’s been diagnosed with a brain tumor and is working on one last career-defining science-fiction movie script, is confronted by Max Nomax, the convicted cosmic murderer/artist who’s the main character in that script. Lots of painted-looking, deeply-hued art by Irving (who does his own coloring) make it yet another dense, cool-looking, highly individual comic in  a week that’s full of them (reason enough for giving thanks…). 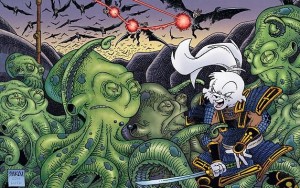 Since it is Thanksgiving weekend, let’s go through the rest of the good stuff quickly — especially since it’s all books I’ve already commented on in previous weeks. Usagi continues its mashup of feudal Japan and War of the Worlds, with the bat-winged Komori ninja entering the fray this week, upping the action quota of this penultimate issue . Check the wraparound cover reproduction on the right to see what you’re missing if you don’t buy this book.. 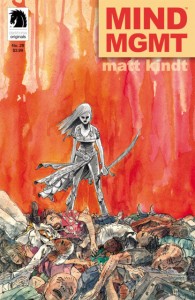 I’m still glad to live in a market where this kind of book can be published, with its psychic-conspiracy plots, its pastel coloring, its meta-commentary and in-joke codes, and its appealing, steely-strong female lead — the letters page mentions how much she’s developed since the confused girl of the first issue, and just a glance at this issue’s cover will confirm that; it’s a tribute to Kindt’s careful characterization. 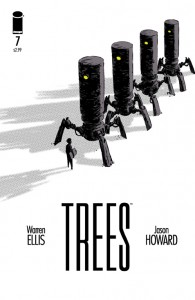 This continues to deepen its world-spanning story and characters with each issue — and, now that we’ve gotten to know and root for the people, the looming, immobile alien constructs of the title look like they might be stirring, beginning to affect the plot. How will it all come together? Knowing Ellis, it will be scientifically clever, gut-wrenching and apocalyptic; get some popcorn and climb on board. 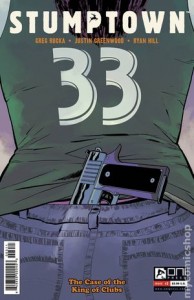 The adventures of Rucka’s Portland-based female P.I. continue, as she and a colleague from Seattle investigate the brutal beating of a friend after an MLS soccer between the two Pacific Northwest rivals: was it hyped-up hooligans from the other side, fanned by the cities’ mutual hostility, or something even more sinister? There’s the typical hardboiled encounters with perps and cops, the stubborn search for the truth by the main character, and all the other pleasures of a well-told and illustrated detective tale.

Thor and his multiverse-travelling companions find and battle the Black Priests (who turn out to be led by a familiar face), and learn more about their true enemies, while Doctor Doom and the Molecule Man use their combined, and considerable, power to begin to affect events from another angle. Hickman’s greatest asset is his massive, years-spanning plots, as carefully constructed as Swiss watches, and watching everything slowly click into place continues to be the best payoff for spending the last couple of years reading these comics. 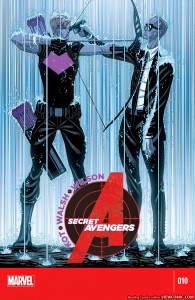 This is another carefully-set-up comic, with a 12-issue plot that’s rounding into its home stretch; it makes good use of Welsh’s art, which places him firmly in the David Aja/Javier Pulido school, by mixing drama and humor (much more of the former, as the impending finale keeps raising the stakes), and giving him characters like Hawkeye, Maria Hill, M.O.D.O.K. and Agent Coulson to play with and draw appealingly. This book is likely to be cancelled soon (its monthly sales are just under 20,000, the typical cutoff for marginal books), so buy it and appreciate it while you can, or mourn its loss later. 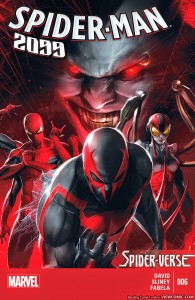 Part of the Spider-Verse crossover, as Miguel gets back to his home time, at least temporarily, joined by a six-armed Spider-Man, a lady steampunk version, and the energy vampire Daemos, who wants them all for a snack. You probably don’t have to read this in order to get the main crossover series, but the David script makes it smooth and fun, and a worthwhile chapter of the overall saga. 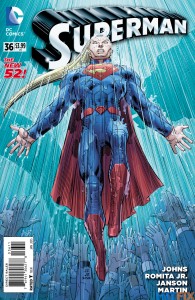 Ulysses offers the people of Earth a deal: the first six million people who come to his huge transport ships can go live in his dimension, where there’s a “great world” free of want and suffering. When has an offer like that ever turned out well? You’d think the rest of the inhabitants of Earth could just ignore it, confident that the end result would be a gene pool with six million fewer stupid people, but it doesn’t quite work out that way… although, sure enough, by the end of the book a larger, more sinister plan begins to reveal itself. With Johns, Romita Jr. and Janson, it may be a bit predictable, but it’s also entertaining and good-looking, so it’s easy to forgive it and just enjoy the ride.

With 40 years of experience in comic reading, collecting and reviewing, English Professor Phil Mateer has an encyclopedic mind for comics. Feel free to ask Phil about storylines, characters, artists or for that matter, any comic book trivia. He will post your questions and answers on the AABC blog. His knowledge is unparalleled! He is also our warehouse manager, so if you are looking for that hard to find comic book, ask Phil!
View all posts by Phil →
This entry was posted in New Comics, Reviews and tagged Annihilator, Avengers, Crossed Plus One Hundred, Gotham By Midnight, Madman, Mind Mgmt, Ody-C, Spider-Man 2099, Stumptown, Superman, Trees, Usagi Yojimbo. Bookmark the permalink.