Not a bad week — two hotly-anticipated first issues, plus still-early, you-can-still-get-the-whole-set editions of some really good titles, and assorted other cool stuff too. Let’s look….:

Morrison first announced this years ago, right after Infinite Crisis, so it’s had a long gestation; as the title suggests, it uses the 52 universes (universi?) of the New-52 cosmos as its playground, as a group of heroes gather to try to rescue Nix Uotan, the last Monitor, and protect the multiverse from encroaching evil. There are lots of echoes of earlier Morrison books: the quasi-Lovecraftian weird menaces  in Doom Patrol, the meta-commentary that breaks the fourth wall and makes the reader a character in Animal Man, and the individual-against-the-corrupt-system undercurrent from Invisibles, especially — and the heroes include the Earth-23 “Obama” Superman (the Krypton rocket landed in the American south, and the infant inside took on the characteristics of the African-American couple who found him, eventually growing up to become both the President of the US and the world’s protector), Captain Carrot and an Aquawoman, which should suggest the wide range of possible characters available. This is structured like Morrison’s Seven Soldiers of Victory: this introductory title, then six stand-alone issues following various characters on various Earths, and then a conclusion volume. Some people complain that Morrison books don’t make any sense, but it’s just that they sometimes require actual thought from the reader; don’t let worries about that stop you from jumping on this high-energy, mind-bending rocketship. 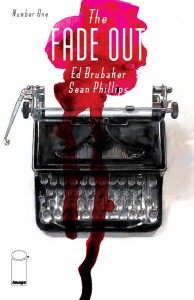 Moving from the infinitely cosmic to the very specifically nitty-gritty: this is the latest crime noir thriller from Brubaker and Phillips, who just wound up their long-running Fatale last month; it’s set in late-’40s Hollywood, and involves an alcoholic screenwriter, a dead starlet, a hard-nosed studio security head, and any number of other dream-chasers, drunks, losers, hangers-on, and similar well-drawn and possibly-suspect characters. It’s a very polished first issue, a textbook case of how to introduce a story, set up a suspenseful plot with compelling people in a well-researched, realistic setting, and hook the reader from the start; at $3.50 for thirty pages of story plus six of editorial material, it’s also a great deal. Consider that the first issue of Fatale went through four reprintings and ended up worth $40, and then grab this while you can. 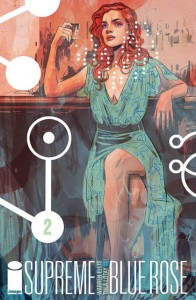 Ellis is prolific, but he’s not a Bendis; he tends to work on one project at a time, so it’s unusual to see a week with two of his books out. Supreme is a reimagination of that Image superhero title — an extreme reimagination, considering that, by the end of this second issue, we haven’t seen the title character yet. On the other hand, we have seen a number of mysterious and startling women: a mathematician whose formulae are allowing her to access time-travelling sentient radiation; a red-headed, timeless femme fatale who knows that the world is made up of stories; an African-American limo driver whose real job is analyzing alternate-timeline computer simulations; and the 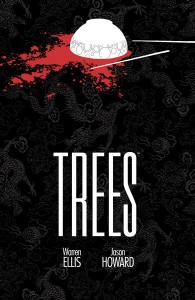 viewpoint character, a reporter who’s been hired to investigate mysterious phenomenae that are probably connected to the mathematician. It’s all deep, hard-wired speculative fiction, and at the same time very dreamlike; Lotay’s art emphasizes the otherworldly qualities through the coloring and a slightly out-of-focus thing she does with some of the scenes that overlays crayon-like scribbles with the more-realistic drawing, and it’s all stunningly, ethereally pretty. This is a very modern-looking, cool comic. Trees is sf too,with its impassive, massive alien towers that loom in all the backgrounds, but it’s focused on characters too, as Ellis keeps toggling between the different locations (in this issue, China and Iceland, with a little bit of Paris and Somalia) and focusing on ordinary people dealing with a world that’s become  extraordinary, and a little more deadly, in the ten years since those towers’ appearance; it’s definitely a book where readers should pick up the first three issues, plus this one, and binge on them to get the story’s full effect so far (you could wait for the trade, of course, but where’s the fun and next-issue anticipation in that?) 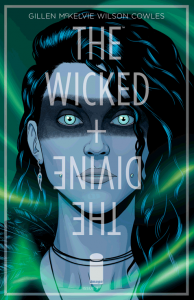 Like the other writers here so far, Gillen likes to create fully-realized, complicated worlds, and then trust the reader to pick up on all the little nuances and clues about them; he does it in his alternate-history war comic, Uber, and also here (he gives new readers the book’s premise in 22 words on the inside front cover: “Every ninety years twelve gods return as young people. They are loved. They are hated. In two years, they are all dead,” and then jumps right into his story; it’s up to the reader to keep up from there). McKelvie’s a good partner for this, because his precise, careful figures and expressions make it easy to tell the large cast apart, and to guess what’s going through everyone’s heads, even when they aren’t saying it; like Trees, it helps if you read the earlier issues first: there are only two, and they’ve gone through multiple printings already (this book was an instant hit), so get them off the stands and get caught up on one of the better books of the year. 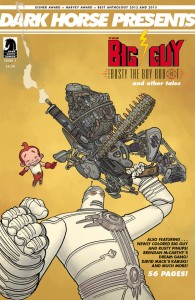 This is a relaunch of this anthology series, a little smaller (56 pages of story, which means, usually, seven eight-page episodes) but a lot cheaper ($4.99, as opposed to the last volume’s $7.99). That makes it an even bigger bargain, since it has a similar lineup of well-regarded indy creators: the cover feature is Geoff Darrow’s Big Guy and Rusty the Boy Robot, and fans of his Shaolin Cowboy will want to watch him apply his obsessively-detailed, microscopically-precise drawing style to the beach scene that’s the backdrop for the main characters’ extended fight scene here; Darrow also gets the issue’s second slot, which is used to provide seven full-page pinups of the weirdly-matched, not-quite-sane duo. The rest of the issue includes a David Mack Kabuki, the first chapter of a Resident Alien serial by Peter Hogan and Steve Parkhouse, a typically-psychedelic Brendan McCarthy offering, “Wrestling With Demons” by Jimmy Palmiotti and Justin Gray and with art by Andy Kuhn, and Sabertooth Swordsman, a Chinese character who’s exactly what his name implies, with story by Damon Gentry and art by Aaron Conley (who’s done a couple of issues of Prophet); it’s a good conclusion, because its intricate art is a good echo of Darrows’, including a couple of finely-detailed, maze-like full-page splashes that are a lot of fun. As always with DHP, you might not like every story here, but there should be more than enough interesting stuff to satisfy you, and you’ll get exposed to some cool creators you’d never have known about otherwise. 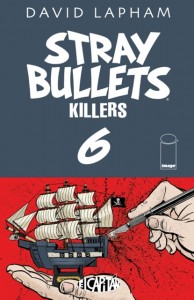 This is a relatively quiet issue of this comic (which is to say, no one is actually stabbed, shot, murdered or even wounded), following Virginia and Eli’s relationship and focusing on Eli’s creepy art teacher Paul; the suspense is about just how creepy/dangerous Paul is, and it’s left, typically, not-quite-resolved. All that setup is sure to pay off in a later issue, though; this is a book where all the characters are just one panel away from a sudden car crash, explosion or similar spasm of violence. It’s the way that violence is carefully prepared for, though — sometimes months or years in advance — that makes this book such a carefully-constructed, fascinating pleasure, and makes even the quiet issues worth reading. 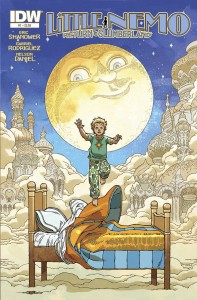 Shanower, who’s made quite a career of adopting the various Oz stories into comic form, is a good choice to try to update Winsor McCay’s whimsical, imaginatively-designed Sunday newspaper strip about a kid who travels to the title land in his dreams. Probably wisely, the one-page-per-episode format of the original isn’t retained, although the strip’s typical last panel, where Nemo wakes up after falling out of bed, still comes up every couple of pages. The Nemo here seems a good combination of the original and the modern-day, a little less innocent but with the same speech patterns, and with a five-year-old’s acceptance of the unusual and magical as being commonplace. Rodriguez’a art, too, walks an effective tightrope between copying McCay and using more-current techniques (it helps that McCay himself was such an innovator), and manages to retain quite a bit of the strip’s charm. It’s a quality package, although it remains to be seen whether young readers reared on modern media will be attracted to it (one hopes so; it certainly can’t depend on the nostalgia factor, since the original run of the strip finished in 1911 — although McCay returned to it later, and then worked on it until the 1920s — so anyone who read it in its original incarnation would be at least 103 years old now, not exactly a large demographic…). 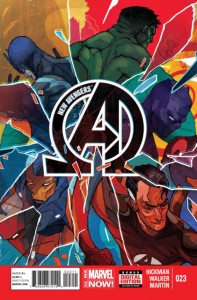 These are the best of the regular Marvel superhero books this week — New Avengers has been very good for the last few issues, as all the seeds planted in the last year and a half by Hickman have germinated, sprouted and grown 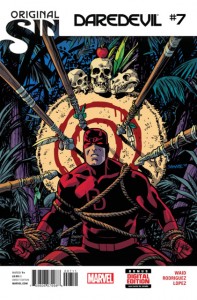 into a fascinatingly-tangled set of themes about heroism, responsibility and just what happens when you’re forced to weigh the needs of the many against those of the few — on an enormous, universal scale. Daredevil features Maggie, Matt Murdoch’s mother (who also happens to be a nun), as he has to rescue her and a couple of her colleagues from Wakanda, partly by fighting that country’s Panther ruler (Queen Shuri,  T’Challa having abdicated a while ago), but mostly by thinking his way out; there’s also a subplot about Matt’s memories of why his parents broke up, which turns out to involve some typical Waid misdirection and refusal to engage in the easy stereotype, and results in some socially-responsible public-service information on the letters page. 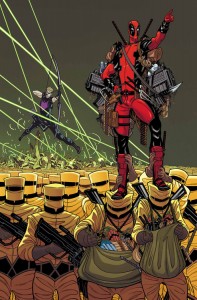 That page also bids farewell to Rodriguez, who’s been the colorist (and once in a while, as here, the artist) on this title for the last four years, making it pop with both primary and more subdued colors; whoever takes over for him will have a hard act to follow. Finally, Secret Avengers guest-stars Deadpool, whose ongoing interior monologue with Kot, the writer, makes for quite a bit of meta-commentary, and is a good example of the book’s quirky, fun, throw-everything-at-the-wall style. It’s the lowest-selling of the Avengers titles right now, and in danger of cancellation; this issue offers a good example of why it doesn’t deserve that fate, so buying it will both entertain you and keep another good comic in the world.

With 40 years of experience in comic reading, collecting and reviewing, English Professor Phil Mateer has an encyclopedic mind for comics. Feel free to ask Phil about storylines, characters, artists or for that matter, any comic book trivia. He will post your questions and answers on the AABC blog. His knowledge is unparalleled! He is also our warehouse manager, so if you are looking for that hard to find comic book, ask Phil!
View all posts by Phil →
This entry was posted in New Comics, Reviews and tagged Daredevil, Dark Horse Presents, Fade Out, Multiversity, Nemo, New Avengers, Secret Avengers, Stray Bullets, Supreme Blue Rose, Wicked and the Divine. Bookmark the permalink.