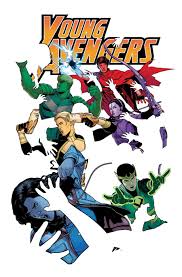 The comics that take first position in these reviews are generally the ones that make me happy — and that’s why this issue of Young Avengers, which concludes its first arc, is at the top this week: I love McKelvie’s expressive, very clean-lined art; I love Gillen’s group dynamics and clever plotting and sense of humanity and humor, and I especially like the way he uses Loki as the instigator and commentator, and in this issue gives a callback to his wonderful Journey Into Mystery run on the character. Get the first five issues of this stylish, smart super-hero team series, and see if you agree. 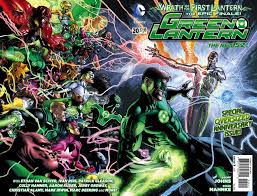 This book, on the other hand, used to make me happy, but Johns has probably overstayed his welcome on it: Rebirth, his resurrection of Hal Jordan, was over eight years ago, and the high point of his run, Blackest Night, was in 2009; since then, there’s been a lot of wheel-spinning, and a lot of colorful rings, and it’s all been at least entertaining, but… yeah, it was probably time to move on. This double-sized issue (66 pages for $7.99) is a suitable farewell, with a 55-page story that wraps up all the plotlines, and brings in a number of guest artists (although Doug Mahnke, as he’s been doing for years, provides the lion’s share of the work; his careful, suitably-alien art — especially his dead-eyed Sinestro — has been one of the best reasons to keep reading this comic), a couple of pages of other people congratulating Johns, and then a goodbye from the writer himself. Too bloated and self-congratulatory? Maybe a little… but hey, a decent eight-year run on any title is rare these days, so it’s hard to begrudge the party. 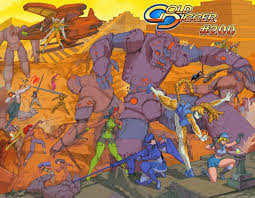 This book, about archaeologist/teacher Gina Diggers, her were-cheetah half-sister Britanny, and their sprawling supporting cast and many Indiana Jones-styled, dimension-spanning adventures, is a tribute to persistence: 50 issues of a first volume in the ’90s, and now 150 issues of the second, and it’s reached a milestone few books can boast of, especially when they’re self-produced and creator-owned. This issue’s stand-alone story is a good example of its many charms, and includes a link to free online copies of the other 199 issues; grab it and see if you get as hooked by Perry’s vivid imagination and appealing fusion of American and manga styles as much as its many other loyal readers have. 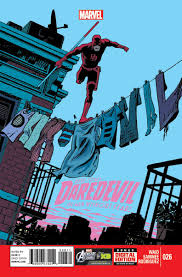 This is a typical issue of this comic — which is to say a very good one, combining Waid’s twisty, insightful scripts and Samnee’s crisp, elegantly-composed visuals into the best-looking superhero book out there (well, maybe it’s a tie, since the Fraction/Aja Hawkeye is similarly gifted). It’s fun when a long-time character hits a sweet spot like this, and comforting to know that it’ll all end up in a series of reprint collections, and be available for years later — but the best part is that we get to read each issue as it rolls off the presses, and wait the long month until each cliffhanger is resolved; the readers who wait for the trade won’t get to feel that tingle of anticipation that the best serial fiction provides. 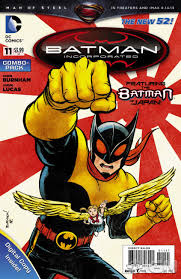 These two comics are linked because they’re both fill-in issues; Batman: Incorporated is the more annoying, since its regular Morrison story is about to reach its climax, but Burnham and Lucas’s tale of the Japanese Batman is a fun 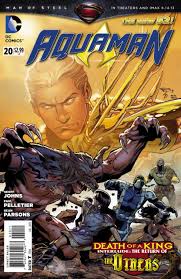 stand-alone story, with some sly pop-cultural references that fans of Japanese culture will appreciate. Over in Aquaman, the dependable Ostrander offers a story with only a page or so of Aquaman himself, but the plus for Phoenix readers is that it’s set in Arizona, involving a new character who’s a Native American hero. Points off for the cover, with its Johns/Pelletier creator credits that someone forgot to change. 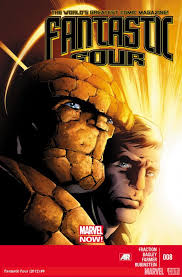 Fraction’s current setup for this title involves the FF exploring all of time and space, leaving it open to almost any kind of tale – and so, we have one that focuses on the Thing, traveling to the Yancy Street of the ’30s during the one day each year when he’s able to turn back into Ben Grimm. While there are also a couple of subplots, it’s an effective stand-alone episode — although I expected a little more of a shoutout to Jack Kirby, who grew up on those New York streets during that time, and would have enjoyed drawing it. 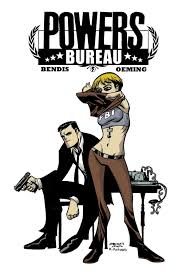 Two by Bendis: Powers, a police procedural set in a world with superpowers, has now-FBI agent Walker working undercover to infiltrate a gang, and sports the regular interplay between him and his partner Deena, plus the 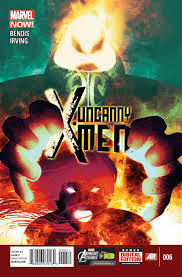 smooth collaboration between Bendis and Oeming that’s let this book last for 14 years. Uncanny is part of the Bendis X-Men universe, and offers Cyclops’s team of new recruits trapped in limbo, where the dread Dormammu has possessed Magick and sicced the Mindless Ones on them (I can’t believe that (a) I just wrote that sentence, and (b) most of you knew exactly what I was talking about…). Like All-New X-Men, it’s surprisingly good; Bendis’s talents and tics have proven a good match for the X-characters so far, and made their adventures addictive again. 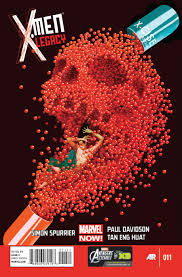 Out of all the Marvel Now! titles, this is one that most threatens to get lost in the shuffle; it’s as idiosyncratic as its lead character, the son of Professor X, whose mind contains hundreds of split personalities, each with a separate power. Spurrier has made him damaged-but-valiant, and unexpectedly human: witness his reaction to the big plot-twist reveal near the end of the book, and his refusal to play by the regular superhero rules. This all makes it entertaining reading, and worth a look for readers who’ve been avoiding it because the lead doesn’t wear an actual costume. Hey, buy it for the covers, which have consistently been among the best in the business: look at this issue’s, which manages to sum up the whole plot in one visually striking and imaginative image. 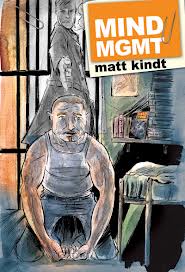 Stuff I bought and liked, but have nothing new to say about, so look up previous reviews in the archives if you’re interested:

With 40 years of experience in comic reading, collecting and reviewing, English Professor Phil Mateer has an encyclopedic mind for comics. Feel free to ask Phil about storylines, characters, artists or for that matter, any comic book trivia. He will post your questions and answers on the AABC blog. His knowledge is unparalleled! He is also our warehouse manager, so if you are looking for that hard to find comic book, ask Phil!
View all posts by Phil →
This entry was posted in New Comics, Reviews and tagged Aquaman, Batman Incorporated, Daredevil, Fantastic Four, Gold Digger, Green Lantern, Powers: Bureau, Uncanny x-men, X-Men Legacy, Young Avengers. Bookmark the permalink.