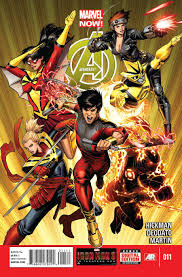 Lots of Avengers comics this week (plus Avengers Arena, 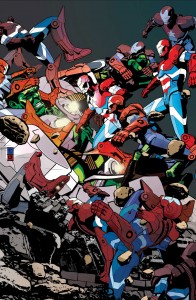 although only the title of that mini-series really connects it to the franchise), and they’re a mixed bag. Hickman’s Avengers is the best; wisely, this is a special-ops, done-in-one story, so it doesn’t add to the title’s increasingly-complex backstory: it’s got Shang-Chi, Spider-Woman, Black Widow, Sunspot and Cannonball undercover at a casino in Macau, where A.I.M. Island is supposedly auctioning off weapons prototypes. Despite the cover, there are no costumes; everyone’s in civilian guise, and it’s a clever, twisty little James Bondish tale, with some fun with the A.I.M. henchmen (Hickman does more-human minions than anyone this side of Don McGregor), and a number of tributes to Marvel’s long-running 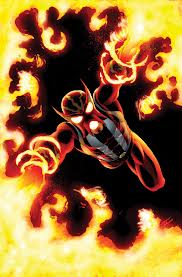 ’70s/’80s Master of Kung Fu book (Deodato uses enough Bruce Lee photo references to justify the story’s title: “Wake the Dragon”).  Secret Avengers revolves around A.I.M. Island too, as the mad scientists there have mass-produced a bunch of Iron Patriot armor, given them sentience, and generally caused trouble; in response, Nick Fury, Black Widow (yes, she gets around a lot, thanks to the movie), Mockingbird, Hawkeye and the Hulk infiltrate the island (well, the Hulk is busy causing a diversion; he doesn’t infiltrate well) on an assassination mission. It’s fine, but suffers from being quite a bit grimmer and more cynical than Avengers, and only the first part of a continued story. Uncanny Avengers is more widescreen —

Remender’s developing a reputation for pyrotechnics — and more complex, as Kang, twin Apocalypse offspring, an enchanted axe Thor wielded thousands of years ago,  the destruction of the S.W.O.R.D. space station, tensions between the X-Men and Avengers divisions of the group, and the deaths of a hundred thousand ex-mutant Apocalypse acolytes all combine into one flashy but maybe-too-unwieldy confection that’s nowhere close to being over yet; it will probably read a lot better in the trade than the one segment does here. Finally, Avengers Assemble is another Age of Ultron tie-in, showing how England et al. reacted to the invasion; it’s OK, and worth checking out if you’re a fan of Captain Britain and the other heroes across the pond, but reads a lot like… well, all the other Age of Ultron tie-ins so far, if at least a little more hopeful.

Gillen’s followed the traditional modern route for a successful comics writer: the small indy critical successes (Phonogram I and II), the well-received mainstream company runs (on X-Men, Journey Into Mystery and, currently, Young Avengers), and now the creator-owned, high-concept splash. Uber is an alternate-history war tale: what if,  just before the end of WW II, the Nazis had managed to create superhumans — not Captain America-level super soldiers, but Superman-level ubermensches (and uberfrauliens? My German, coming from dim Hogan’s Heroes memories, is nicht so gut…)? The #0 issue a few weeks ago, and now this debut, tell that story. Gillen’s put a lot of research into this, and his editorials in the two books so far have been fascinating reading; the comic itself is just ramping up, but between Gillen’s skill with the words and White’s gritty period realism, it’s easy to tell why readers have been drawn to it. 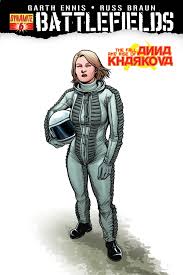 Speaking of war books… Ennis, of course, has been doing them for years, and very well; he’s an obvious fan of military history and research, and this series of mini-series has been an obvious labor of love. This issue features the third and final chapter of his “Night Witches” trilogy, about Russian women aviators during WW II and after; here, his heroine, Anna Kharkova, has been exiled to Siberia for decades, but manages one last act of defiance and flight; it’s an affecting, and surprisingly sentimental, story, and one that should ring a chord in the heart of any pilot, or fan of flying. 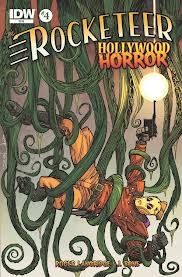 This has turned out to be an entertaining series — the dependable Langridge (who’s worked on Muppet comics and the wonderful Popeye, and had his own series with the Lewis Carrol-inspired Snarked!) offers a ’30s-Hollywood plot that manages to combine the cast of The Thin Man, some pseudo-H.P.Lovecraft, and a narration by one Julius Marx (better known by his stage name, Groucho); J. Bone’s art is so cartoony that it takes a little getting used to, but eventually becomes just right — and, for fans of more realistic art, there’s the gorgeous cover by Walt Simonson. The capper is the end-pages ad for another Rocketeer mini starting in July, offering a team-up with The Spirit, written by Mark Waid and with art by Paul Smith.  Yes, please: I’ll have some of that. 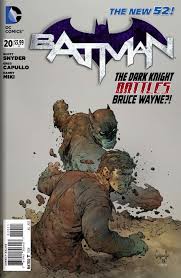 The conclusion of a Clayface two-parter, a nice little palate cleanser after the long Joker story; it’s good, although we’re asked to believe that Bruce Wayne can hold his breath for seven minutes, and the ending hits the pathos button just a little too hard re.: Damien. Capullo has been turning out very good art on this title for a while, too; it’s nice to see an artist work hard and grow beyond his early limitations, and easy to see why this has been DC’s top-selling book for almost two years now. 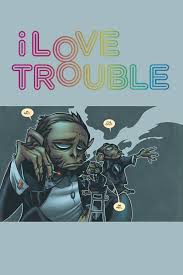 This story about girl teleporter who ends up working as an assassin, and the toll it takes on her, has been full of both interesting art (Robinson’s airbrushy style is both cartoony and sexy) and writing that can be both surprisingly poignant (especially this issue), and funny — there’s the imaginary monkey, for one thing, and the William Shatner “Rocket Man” riff he’s doing on the cover tells you a lot about the kind of offbeat sensibilities at work here. This is one of those titles that deserves more people picking it up, before it disappears too soon. 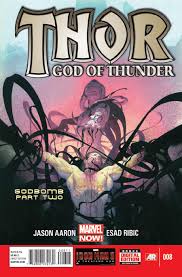 All three Thors — the young Viking-worshipped one from a thousand years ago, the Marvel one we know, and the far-future Odinlike one — get together to try to stop the God-butcher Gorr and the bomb he’s building, the one that threatens to destroy all gods throughout the multiverse. That’s Aaron thinking big, and while I think it’s all been a tad too lengthy up to now, the last-panel splash of the three iterations of the title character all getting ready for battle makes it worth the wait, and has me looking forward to the next issue (although, given that trade-driven stories these days are often in units of six installments, I’m hoping we don’t have to wait four more issues, until number twelve, for a resolution…).

This is a trippy, densely-written space-adventure comic; only Graham could get away with captions like “Within her ambulavit pod, the arc mother probes ahead,” or, at the climax, “Thauilu Vah: Earth’s junction on the cyclops rail, awakened after centuries of polycrystalline suppression. The tower’s energy threads space like a needle.” Add in Roy’s suitably-alien art, and all the Easter eggs for fans of the early-’90s Image universe (Troll shows up? Really?) and this is one of the strangest, and most compelling, books on the stands right now.

With 40 years of experience in comic reading, collecting and reviewing, English Professor Phil Mateer has an encyclopedic mind for comics. Feel free to ask Phil about storylines, characters, artists or for that matter, any comic book trivia. He will post your questions and answers on the AABC blog. His knowledge is unparalleled! He is also our warehouse manager, so if you are looking for that hard to find comic book, ask Phil!
View all posts by Phil →
This entry was posted in New Comics, Reviews and tagged Avengers, Batman, Battlefields, I Love Trouble, Prophet, Rocketeer, Thor, Uber. Bookmark the permalink.