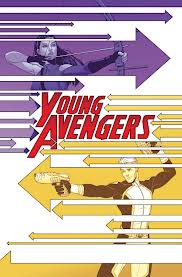 A lot of good books came out this week, but I’m putting this one at the top just because Gillen and McKelvie are having such an obvious blast creating it — between the playful layouts (especially a double-page splash involving a Marvel Boy fight), the skillful mix of drama and deadpan humor, and the young Loki’s expressions as he walks his tightrope act (is he trying to do the right thing, or the wrong thing? How do you trust a trickster god?),  this is a comic that simply makes you happy to read it. 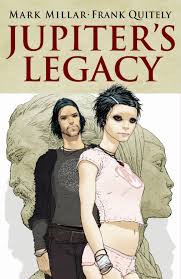 This has sold out quickly, and gotten some good press, but the story really isn’t that special — Millar is doing a ’30s superhero group origin, and then looking at how the children of those originals are coping with powers and fame today. Standard stuff, really — and kind of irritatingly careless: despite having had major superheroes around since the Great Depression, the present-day US is exactly the same as us, with the same history, president, and economic troubles. Ah, but then there’s the art; Quitely could illustrate a phone book and make it interesting, and looking at his precise, attractive renderings of people, fashions, character designs, expressions and backgrounds (one panel, involving a mental landscape that’s sketchy around the edges and increasingly detailed in the middle, is a perfect summary of his skills) is more than enough to justify the price of this book. 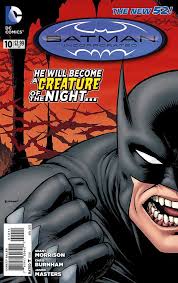 This is a prepare-for-battle issue, as Bruce Wayne gets ready to take on Talia/Leviathan; he’s isolated, dealing with his son’s death, and surrounded by enemies and superior firepower — but, as Nightwing says, “That’s Batman at his most dangerous,” and seeing what he comes up with, leading up to the last-page splash, should be enough to bring readers back for the actual battle next issue. The art changes are sometimes jarring — Burnham only draws about half the pages — but, unlike Jupiter’s Children, this comic is propelled by its writing anyway, so the book’s essential 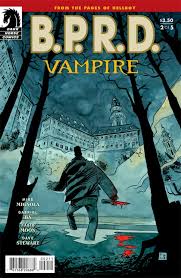 Not much to say about this second issue that I didn’t already say about the first — Mignola, Ba and Moon collaborating on a Hellboy-universe vampire story? What else, exactly, do you need to know? 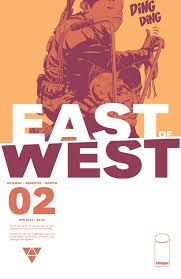 Three by Hickman; East of West is the creator-owned book whose first issue sold out quickly last month, and it’s a mix of Dark Towerish western moments (Death is a gunslinger), alternate-timeline sf (there was never a Civil War, and the modern-day US is Balkanized into a number of different countries) and apocalypic imagery (literally: the Four Horsemen are characters). Dragotta offers impressive art, both in the future-city architecture and the character designs, and while the story is typically Hickman-dense (it’s gradually revealing pieces of an obviously-vast design), it’s got plenty to 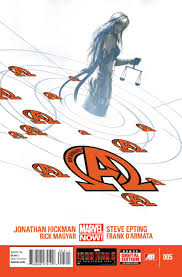 entertain readers, even if they aren’t sure what’s going on.

That same style is present in the two Avengers books, and, while the art in each is effective, and each has its moments, I’m not sure about the corporate strategy here: having your flagship superhero titles be almost-impenetrable to new readers seems a strange idea. Don’t get me wrong — I’m a fan of Hickman’s style, and I don’t mind books that require the reader’s close attention — but his brand of complicated, one-chapter-in-a-sprawling-epic design doesn’t offer the easiest path to retaining the kinds of casual saw-the-blockbuster-movie buyers that comics with the Avengers logo otherwise might. It’s a tribute to his perceived skills that a company like Marvel/Disney, usually so attuned to purely marketing concerns, is giving him this much leeway. 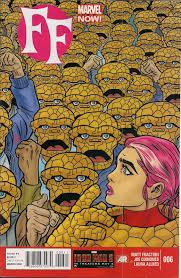 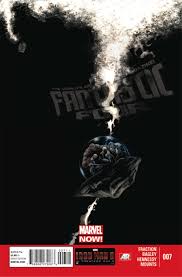 than Hickman to make each issue feel more self-contained, though, so these feel like more satisfying chunks of story. Fantastic Four sees the time and space-traveling adventurers at the “Big Crunch,” the heat death of the universe, while FF pulls a number of interlocking plots forward, notably Scott and Darla dealing with the Yancy Street Gang. No Allred art this issue, and the substitute is trying a little too hard to mimic his style, but, as with Batman: Incorporated, the story itself — including some nice character bits for almost everyone — comes through well anyway.

This is an sf fantasy set in an unnamed world, one where there’s a civil war pitting steam technology on one side, and more advanced, body-mod tech on the other, and a girl assassin plys her trade between the warring factions. The character has previously appeared in a Dark Horse Presents serial, but this is her first full mini-series. Both the world and the lead character are gritty and well thought out, and the art is an appealing blend of realistic and cartoony (it’s appropriate that the alternate cover to this first issue was drawn by Guy Davis, because Dialynas’s art has some similarities to his); it’s a well-done package, and worth a look.

A good indication that the comics market is reasonably healthy right now is that it’s been able to support an indie-flavored, $7.99 anthology like this for two years; of course, it helps when every issue has more than enough stories to justify the price. This time out, the star is the first chapter of a new Nexus serial by Mike Baron and Steve Rude. That’s worth at  least $5 by itself; mix in Shannon Wheeler’s amusing “Villain House,” about a retired super-villain trolling the Internet to get a new gang together (apparently), “Bloodhound,” by Dan Jolley and Leonard Kirk (which was a DC title for awhile), and new art by, among others, Simon Roy, Sean Phillips, Denis Medri, Phil Winslade, Todd Harris, John Higgins and a few

others, and it’s easy to see how this title is able to survive.

You say you want straight-ahead action for your second issue of an ongoing series like Guardians, as Iron Man, Drax, Gamora, Star-Lord, Rocket Raccoon and Groot (sort of…)

take on alien battleships over London? Well, here you go: Bendis reminds us that he can do an effectively-choreographed multi-leveled fight, and mixes in galactic intrigue and humor, while the seemingly-odd McNiven/Pichelli pairing turns out very attractive art. Pichelli’s on display over in Ultimate Spider-Man, too (although an editorial note says this is her last issue — too bad, since she’d been very good on this title for a very long time), as Miles Morales faces one of those unexpected tragedies that’s wired into any Spider-Man’s mythos, thanks to a fight with Venom; the next-issue cover shot shows the Ultimate version of a scene that should be familiar to any Marvel fan, too. 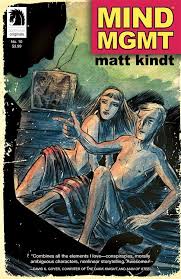 Why group these two comics? They’re both completely individual solo acts, whole packages created, owned and operated solely by one artist; both also have been in the news recently as possible movie or TV deals.  Since both have low print runs, that’s led speculators dreaming of Walking Dead-like profits to snap up their early issues. 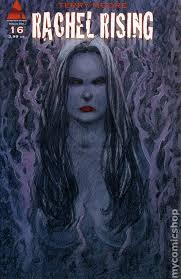 Rachel is the more “normal” title, with an occult-possession storyline that’s both spooky and assured, while Mind Mgmt is the kind of quirky, sui generis work that’s perfect for comics, but hard to describe — it looks primitive on first glance, but its secret-society spy-thriller plot sucks you in, and the more you look the more you see there, lurking in the margins. Don’t be fooled by the speculators — an option isn’t the same as a done deal, and the odds on any title hitting the big-time media tie-in are very long. On the other hand, appreciate that we’re in the modern age of comics, where you don’t have to spend big bucks on originals: trade paperbacks are available of both titles, and they’re well worth picking up. Invest in the story instead of chasing the potential profit, and you’ll never go wrong.

This title is winding down (it’s only got two issue to go), and while it’s a mystery why it never found a big audience (it’s the Ennis/Parlov team that brought us that long, wonderful Punisher run), its format — a secret history of Nick Fury, from the ‘end of WWII up, following his work for the CIA in various hot spots like the French-held Vietnam, the Bay-of Pigs Cuba, and now the ’80s Contras in Central America — was always more maxi-series than open-ended. It’s been fascinating to watch the cast of characters age over the 40-year span, and the characterization, sense of history, action and cynical-but-human themes have made it a great run; again, let’s be happy for the age of the trade paperback, because this deserves to be in print for a long time.

With 40 years of experience in comic reading, collecting and reviewing, English Professor Phil Mateer has an encyclopedic mind for comics. Feel free to ask Phil about storylines, characters, artists or for that matter, any comic book trivia. He will post your questions and answers on the AABC blog. His knowledge is unparalleled! He is also our warehouse manager, so if you are looking for that hard to find comic book, ask Phil!
View all posts by Phil →
This entry was posted in New Comics, Reviews and tagged Amala's Blade, Avengers, B.P.R.D., Batman Incorporated, Dark Horse Presents, East of West, Fantastic Four, Fury, Guardians of the Galaxy, Jupiter's Legacy, Mind Mgmt, Rachel Rising, Young Avengers. Bookmark the permalink.