I’ve made it no secret how much I like Teen Loki: instead of a stereotypical cackling villain, he’s a kid trying desperately to do the right thing, and he’s willing to cheat, lie and piss off any powerful adult figures to do it. That makes him, simultaneously, a typical Trickster archetype and a typical adolescent, and leads frequently to results like the one on this issue’s cover. In the capable hands of  Gillen and Fraction, we’ve actually come to care about the little hustler; here’s hoping that, as the current (and excellent) six-part crossover with this title and Thor winds down (seriously, people, go pick this up: both the writers and the artists are at the top of their game, and delivering action-packed twists and dynamic characters fighting for high stakes), and the writers bid their goodbyes and move on, they leave him just like he is now, and with a deservedly-happy ending. 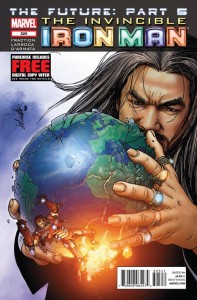 Speaking of titles winding down and delivering great stories… Fraction and Larocca, after many years on this title, are hitting the finish line at top speed, with the Mandarin ready to split the world in half and a friendless, weaponless and mind-controlled Tony Stark left helpless in a cave — or so the Mandarin and all the assistant bad guys think, forgetting that, as Stark says, he does all his best work in caves. As with JIM, there are reversals, counter-moves and double- and triple-crosses aplenty here, and it’s all been suitably exciting, heroic and lots of fun. It’s no coincidence that Fraction has a hand in both titles, either — he’s probably Marvel’s most unpredictable, energetic and entertaining writer right now… 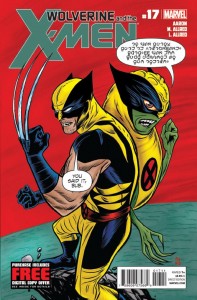 … and here’s the other contender for that title, teaming with Allred for an issue spotlighting Doop, the green floating X-blob, to show just what it is that he does at the Jean Grey School for Higher Learning (as it turns out, he works behind the scenes protecting the school from all manner of threats, from Nazi bowlers and local politicians to web-blogging nuns). Aaron gives full rein to his bizarre, snarky sense of humor here, and fans of the old X-Statix will be thrilled to see Allred drawing the Doopster again. Between this, the Iron Man and the JIM, Marvel gets the top three titles this week. 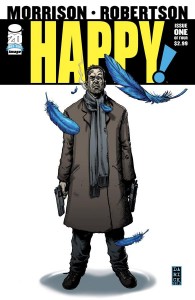 A tough-as-nails ex-cop and hitman (but the only people we see him kill are bad guys trying to shoot him, and a serial killer — so, you know, good for him) ends up in a mob hospital, drugged and injured…. and then a tiny blue flying cartoon horse named Happy shows up, telling him to get his pants on and get moving, because he’s the imaginary friend of a little girl and she needs the tough guy’s help. In many hands, this premise would be stupid and ‘way too precious — but with Grant Morrison writing it and Darick Robertson drawing it? Pure gold, people. I especially like Robertson’s ability to draw both the gritty, real-world, Garth Ennisonian violence and the cartoon critter so equally well, and make them so believably part of the same book. I know fans are sad that Morrison’s leaving his superhero books like Batman and Action after a few more issues, but if the payoff is more comics like this (and it’s published at Image, yet another quirky, cool book in that company’s stable this year), then it’ll be worth it. 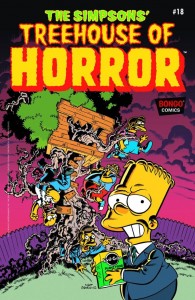 This annual fright-fest doesn’t have quite the cachet of the last few years (where Bongo corralled almost every cutting-edge indy creator to provide stories for it), but the more mainstream creators this year deliver an Evil Dead/Cabin in the Woods takeoff, a Rosemary’s Baby, a Bartman vs. Lisa as the Joker (well, the Giggler, but whatever…) tale, and a Bride of Frankenstein closer. At $4.99 for 48 pages, it’s just the thing to read as the temperatures start to inch toward 90 degrees, and the pumpkins start showing up in the grocery-store aisles.

Fury and his two co-soldiers face angry Cuban troops in the aftermath of the Bay of Pigs, while Shirley has to deal with her congressman husband’s cowardice. If, after all those Ennis/Parlov Punisher issues, you expect lots of  expertly-presented tough-guy dialogue, weirdly imaginative torture and cynical political commentary… well, you’ve come to exactly the right place

Ramping up to the 700th issue, as Spidey deals with Alpha, the much-too-powerful teen who resulted from one of his failed experiments, and who has no patience  with old-fashioned ideas about power and responsibility. Ramos’s art is fun to look at (I especially like his Jackal), and Slott continues to make this book a nice mix of adventure and humor, with a touch of angst — just the recipe that suits Spidey best.

This is Bendis and Oeming’s all-ages title, about two sisters, a teen and a pre-teen, who get the world’s first super-powers after one of those convenient scientific accidents, and have to deal with the aftermath. This reminds me of Robert Kirkman’s Super Dinosaur, in that it’s maybe trying a little too hard to be accessible to everybody, and pull in younger readers with its bright shiny action, but hey: Bendis has a daughter about the age of the younger sister here, and if he’s writing it to her then more power to him; he’s probably got a better lock on what will attract that audience than I do. 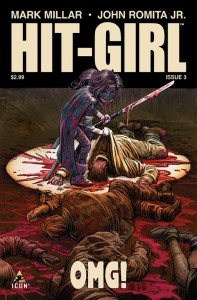 If there’s a knock on this book (or Millar comics in general) it’s that it’s predictable: if you’ve read either Kick-Ass series, or the earlier issues of this title, then you know just what to expect here. On the other hand, since “what to expect” involves all that good-looking Romita Jr./Palmer art, plus Mindy finally having enough of the mean girls at school, plus the regular mob action and assorted hijinx, then “predictable” isn’t really all that bad. 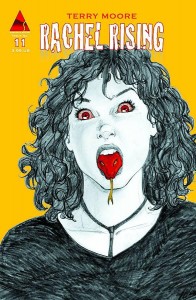 More spooky goings-on, as we find out more about What’s Actually Going On and the deaths start to form a pattern. What I like most about this series is that it’s so different from either Echo or Strangers in Paradise: SIP was a relationship book wrapped around real-world political intrigue, while Echo had surprisingly well-reasoned-out hard science at its core; this one is much more pure horror, with demons and witches and a town under an ancient curse, but under Moore’s hand it seems just as reasonable and logical as the others. Killer cover and last-page splash, too. 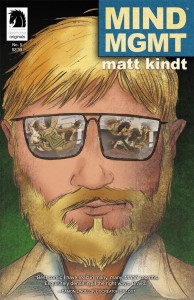 Really good stuff I bought and read, but have already praised enough, so read previous reviews in the archives if you’re interested:

With 40 years of experience in comic reading, collecting and reviewing, English Professor Phil Mateer has an encyclopedic mind for comics. Feel free to ask Phil about storylines, characters, artists or for that matter, any comic book trivia. He will post your questions and answers on the AABC blog. His knowledge is unparalleled! He is also our warehouse manager, so if you are looking for that hard to find comic book, ask Phil!
View all posts by Phil →
This entry was posted in New Comics, Reviews and tagged Darick Robertson, Doop, Garth Ennis, grant Morrison, HIt Girl, Iron Man, Journey into Mystery, Loki, Rachel Rising, Simpsons, Spider-man, Takio, Wolverine. Bookmark the permalink.