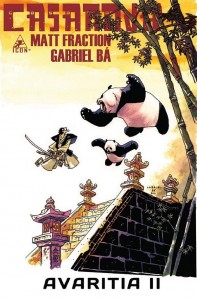 What if you worked for a multiversal spy organization and had to go around blowing up alternate realities where the Nazis had taken over? What if, having gotten tired of destroying entire timelines, you realized that just killing the Hitler of each one — before he took power and became “Hitler” — would work instead? What if, having killed a bunch of those alternate-timeline young Hitlers (who, after all, hadn’t done anything crazy or wrong yet, and were mostly just creative-but-failed artists scuffling to get by), you started to like the guy… ?  That’s the premise of this new Casanova serial, although it’s “Newman Xeno,” Casanova’s mummy-bandaged genocidal nemesis, who’s the object of all the killing. Yes, it’s intriguing, and Ba’s art continues to make it sing (look at that cover, with its killer pandas!), and Fraction’s letters page in the back continues to rank with Bendis’s and Kirkman’s as the best in comics, and why, exactly, aren’t you buying this book right now? 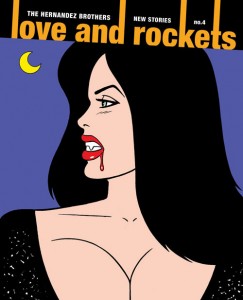 This came out a week or two ago, but Fraction gives it some love in the Casanova letters page, and I have to add my voice: Jaime, in a long story that started in L&R #3 a few months ago and ends here, wraps up his 30-years-running Locas story, and if you’re one of those people who’ve been following Maggie and Hopey and their lives since the ’80s — and, maybe like a lot of friends from when you were younger, you remember the good times with them but have kind of lost touch over the years —  you absolutely have to read it. It’s heartrending and beautifully drawn and wise, and if it doesn’t make you cry it’ll at least choke you up, and it’s absolutely the best comics story you’ll read, not just this year, but for a long, long time.

If you passed this over on the stands as just another Avengers mini-series… well, it is, but it’s Howard Chaykin drawing a Nick Fury-assembled black ops Avengers team from, yes, 1959, and the members include Sabretooth, Kraven the Hunter, Dominic Fortune, the Sub-Mariner’s sister Namora, Silver Sable pere, and Ulysses Bloodstone. Even better, it’s only $2.99 instead of Marvel’s regular $3.99, for the same 20 pages of typically-meticulous Chaykin art. Buy a couple, and maybe they’ll be encouraged to stick with that price point for more of their other books, too.

OK, readers, we’re going to do the DC #2s this week, and the big question here is: does the second issue build on the first one, and make readers want to pick up #3? To be fair, let’s do them alphabetically:

… and, alphabetically, the best comes first: this doesn’t have the shock of the new that the first issue did, but it’s Superman captured by Luther and the US Army, and it’s an entire issue of him breaking out, so what’s not to like? The Morales/Anderson art is very nice (they make an effective pair, and they’re growing in quality as they get to know one another’s abilities) and Morrison knows just what he’s doing, and the last page sets up a super-villain team-up that old fans, especially, will appreciate. Yes, we’re all coming back to read the next issue; nobody’s going 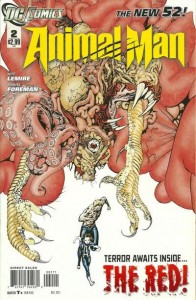 A good second issue — it builds on the story of the first, deepens our knowledge about Buddy and his family, shows Foreman’s art developing nicely (it’s particularly strong in the psychedelic “into the red” and the horror scenes, but even just the “Buddy’s family” pages have an offbeat-but-attractive indy feel), gives us characters and a quest worth rooting for, and generally makes us feel like we’re reading something cool and special, and worth sticking around for. 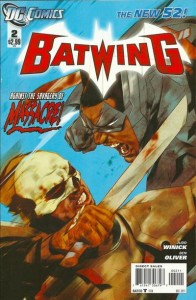 This, on the other hand, doesn’t do itself any favors — the painted art is still interesting enough to be a plus, but it isn’t that clear in the storytelling; the well-researched modern-African setting, the other attraction of the first issue, gets little development here. Instead, we get a tired resolution to the first-issue cliffhanger (one of those “the blade missed your heart by a millimeter” lucky breaks); worse, unlike Action and Animal Man, which felt like satisfying chunks of story, this took about two minutes to read, with the last-page splash only getting us to the main battle that was forecast back on the first page of the first issue. The book’s last line, meant to pump us up and bring us back for #3, is 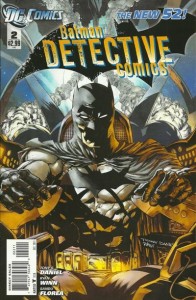 tone-deaf and weak-ass; its missed opportunity sums up a disappointing comic.

Daniel, against all expectations (well, my expectations, anyway) is producing good work here. Last issue’s cliffhanger isn’t resolved, but that’s a wise move, saved for later; instead, we get surprisingly-effective scenes of our hero at work as both Bruce and Bat, nicely-integrated supporting-character bits, the introduction of a suitably-imposing new villain (with just enough hints of what he can do, and who his minions are, to make it all intriguing), and end with another last-page cliffhanger guaranteed to make us read the next issue. Score: Daniel 2, smart-ass reviewers 0. 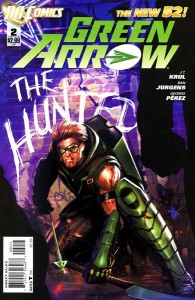 This one’s kind of a push: the Jurgens/Perez art is nice to look at, and there’s more than enough fighting to satisfy the casual superhero fan who picks this up (with a next-issue promise of an even bigger against-great-odds battle). On the other hand, this new version of Ollie is still a cypher (he might as well be Roy Harper, for all we know about him), and the writing is often painful (“You can just go suck it, Green Arrow,” says one villain and GA later says “You want nasty? I can do nasty“; that’s dialog that wouldn’t even work in a porn film, and just sounds stupid here). After two issues, I’m barely interested enough to look at the next issue — but I work in a comic store, and don’t 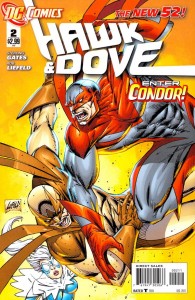 have to buy it. Those of you who need to spend $3 to keep up will have a harder decision.

So… other avatars named Condor and Swan to fight Hawk and Dove? Like Green Arrow, this ends with a battle about to start (not a bad way to bring people back), but other than setting up the bad guys nothing much happens, and while 12-year-olds might find the art kewl the rest of us can’t get past all the gritted teeth and people with legs twice as long as the rest of their bodies, and all the other Liefeldian anatomical impossibilities. Not being 12 years old, I’m going to pass.

Inoffensive, but hard to remember — Jurgens knows how to write Booster Gold, at least, and his struggles to lead the new team (helped, interestingly enough, by Batman) are readable, but there’s no resolution to what’s happening, and when a new big bad guy is revealed on the last page, there’s not that much reason to care. Middle of the road in action, art and execution, it’ll bring back readers who already like the characters — but I don’t think it’ll be on the top of anyone’s reading list, and when 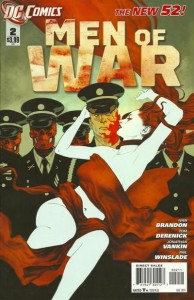 expenses have to be cut it’ll be an easy comic to drop.

The hook here is regular military grunts in a super-powered world, but other than an interlude with the red-headed floaty girl on the cover, nothing here plays with that concept, or shows why it’d be worth reading aboout. It’s fine in a regular war-comic kind of way, but if you weren’t already a war-comic fan going in, you wouldn’t find enough in this issue to bring you back. 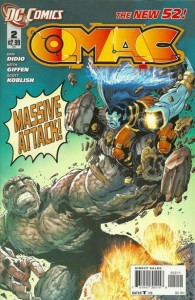 This one’s in my top five of the new 52, and the second issue works just as well as the first. Giffen’s Kirby-tribute art is still expansive, energetic and fun, and the coloring makes this a flashy, good-looking book. The idea of having a poor schlub keep getting turned into a Hulk-like creature at the behest of an omnipresent, electronic-jumping sentient computer, and smash whatever it wants him to, is presented clearly and with enough oomph to hold readers’ attentions; unlike, say Men of War, a newbie comics fan is given enough information to figure out what’s going on, and enough excitement and cool graphic fireworks to stay. This book started out near the bottom in total circulation, but I’ll bet that, unlike almost all the others, it’ll actually gain readers as it goes along, and end up lasting a lot longer than some of them. 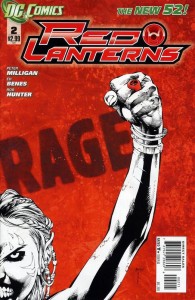 Ehhhh… one Lantern comic too many, right? Milligan keeps it interesting (there’s a long bit with two alien fighter pilots arguing that, with a lesser writer, would have been merely a quick cliche, and here actually humanizes them while moving the plot and theme along), but a whole comic about rage-fueled alien ring-slingers just doesn’t play to his more-subtle writing strengths. Benes is an artist who’s good when he’s given good material, but has little to work with here, and I suspect that this is another book that’s going to see a hefty third- and fourth-issue drop in readers. 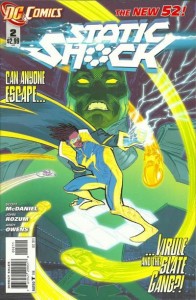 As with Batwing, this has a lame resolution of the first-issue cliffhanger (our hero, in effect, says “Gee, my powers must be giving me new abilities to survive something like that.” Lucky break for you, too, Virgil), and ends pretty much where it started, with another confrontation with the same bad guy.  There are some flashes of humor, and the tech stuff shows imagination; if that’s coming from Rozum, too bad, because he’s leaving in another issue or two, and then will there be enough to keep readers coming back? Hard to say, especially because it’s only maybe a 50/50 bet right now as it is.

This definitely shows improvement over the first issue: there’s a lot less of the “we have to introduce everybody and explain their powers” vibe, and more focus on the insane moon and the cool explosions and the way half the team want to be the leader, and are kind of cranky and sneaky and willing to stab each other in the back to do it. The art’s up to delivering the effects, too, especially the two-page splash at the end, and if other readers are as interested as I am, then this book should have some possibilities. 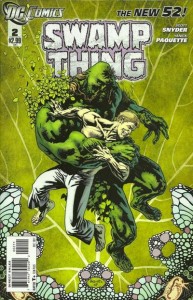 As an overall concept, this book is OK, although as a stand-alone second issue it has problems: it’s mostly a big info-dump talk with one of the Parliament of Trees, for example;  the P of T was what always made my eyes start to glaze over in the old Swamp Thing, and they haven’t improved their plot-goosing abilities in the “new” DC. Still, the art manages to look good (it echoes some of the Bissette/Totleben border effects and nature fetishes of the Moore Swampy run), and the horror angles and last-page appearance of an old character might help bring readers back. Because of the three Search for Swamp Thing issues before the relaunch, this book already feels like it’s been treading water for a long time, though, so some sort of resolution to the Alex/Swamp Thing split needs to occur soon.

With 40 years of experience in comic reading, collecting and reviewing, English Professor Phil Mateer has an encyclopedic mind for comics. Feel free to ask Phil about storylines, characters, artists or for that matter, any comic book trivia. He will post your questions and answers on the AABC blog. His knowledge is unparalleled! He is also our warehouse manager, so if you are looking for that hard to find comic book, ask Phil!
View all posts by Phil →
This entry was posted in New Comics, Reviews and tagged Action Comics, Animal Man, Avengers 1959, Batwing, Casanova, Detective, Green Arrow, Hawk and Dove, Justice League International, Love and Rockets, Men Of War, Omac, Red Lanterns, Static Shock, Stormwatch, Swamp Thing. Bookmark the permalink.